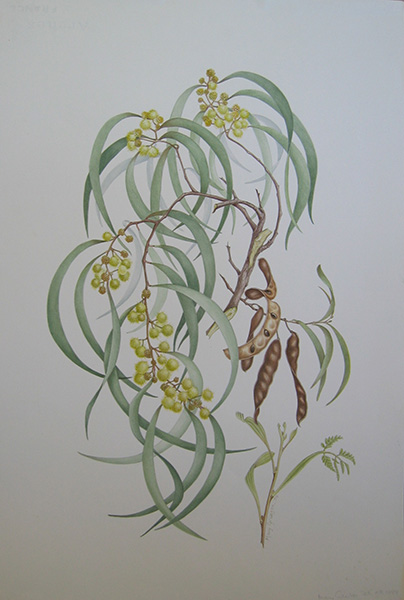 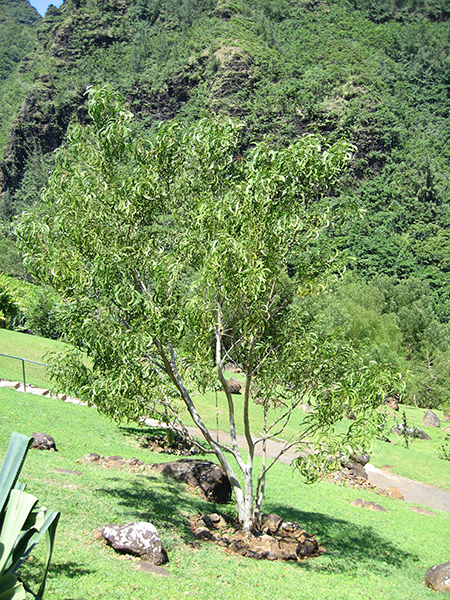 Acacia koa is a fairly common Hawaiian tree that is well known for its decorative wood. Acacia koa is a large tree becoming 50 feet tall in cultivation, but very old trees can become much taller. At maturity, the trees are 10 to 25 feet in diameter. The tree is somewhat unusual in that it produced two types of leaves. The younger leaves are twice compound and have a petiole with small leaflets. The mature "leaves" are not at all compound, they are modified leaf stems, or phyllodes, which function as leaves. These crescent-shaped phyllodes are gray-green and range from 3 to 9 1/2 inches in length. The small, yellow, powder-puff shaped flowers occur in clusters either at the ends of the branches or at the bases of the phyllodes. The flowers are formed in heads with cream-colored corollas, long, curled stamens (more than twice the length of the corolla) and pubescent ovaries. Acacia koa has wider pods, laterally arranged seeds, and more curved phyllodes than Acacia koaia. The seeds are contained in brown bean pods 1/4 to 1 inch wide and up to 12 inches long. (See also, Acacia koaia.)
(Bornhorst, Heidi L. 1996. Growing Native Hawaiian Plants.)
(Wagner,W.L., D.R. Herbst, and S.H. Sohmer. 1990. 1999. Manual of the Flowering Plants of Hawaii.)

From these magnificent trees the early Hawaiians made their canoes, especially their war canoes and those used for long sea voyages. Koa was also used for surfboards, paddles, and for framing grass houses. The bark provided dye to tapa, a light cloth made from the bark of Wauke (Broussonetia papyrifera). The Hawaiians ukulele is also made of this wood essence. It is interesting to note that Hawaiians of earlier times did not use this essence for bowls or platters because of an unpleasant flavor associated with the wood, which rendered a bitter taste to the food.

Koa timber is called "Hawaiian mahogany" because of its chatoyancy, a property that is usually attributed to certain gems, the cats-eye effect or shimmer, which gives a sense of depth in the gem. This property can also be used to describe some of the more dramatic pieces of Koa. This property gives the wood a three dimensional quality, and depending on from what angle one views the wood, it can take on several completely different characters. Because of this attractive appearance and the rich shades of red, golden-brown and brown that this wood grain exhibits Koa is placed today among the most expensive woods in the world. Today, objects made from Koa are valued as the unique treasures they are. Fine furniture, musical instruments, turnery, carvings, crafts, picture frames, and even pens made of Koa wood are cherished by their owners.
(Wilkinson,K.M.and Elevitch,C.R. 2003. Growing Koa,A Hawaiian Legacy.)

Acacia koa is endemic to Hawai'i and is found on all the main islands except Kaho'olawe and Ni'ihau. It is often a dominant plant in dry to wet forests at elevations ranging from 200 to 6,500 feet.
(Wagner,W.L., D.R. Herbst, and S.H. Sohmer. 1990. Manual of the Flowering Plants of Hawaii.)

For the old Hawaiians, Koa were long-lived monarchs of the forest, protected by powerful gods. The native name "koa" reflects this respect, meaning "bold, brave, fearless and warrior".
E ole koa....Let him live, with the health, wealth and well-being of a Koa tree!
(Kepler,A.K. 1983. Hawaiian Heritage Plants.)

We currently have 133 herbarium specimens for Acacia koa in our collection. Click on any specimen below to view the herbarium sheet data.