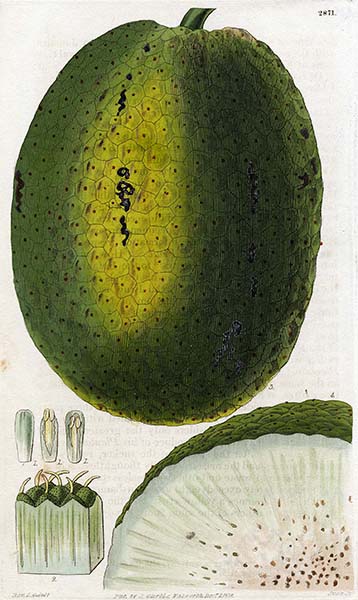 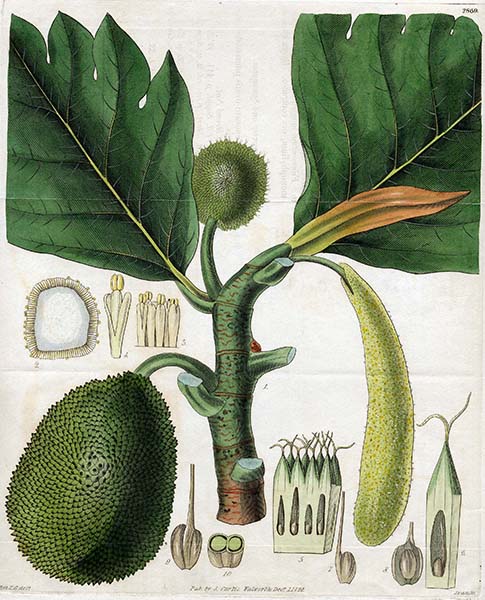 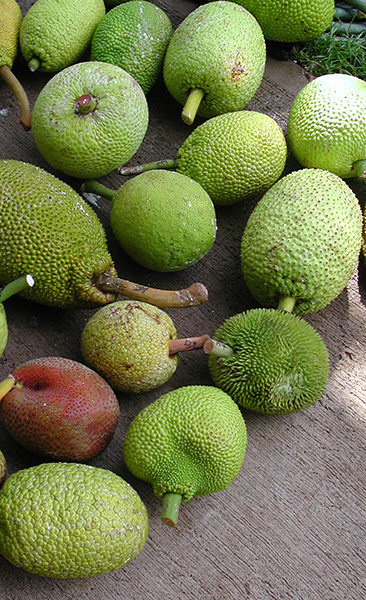 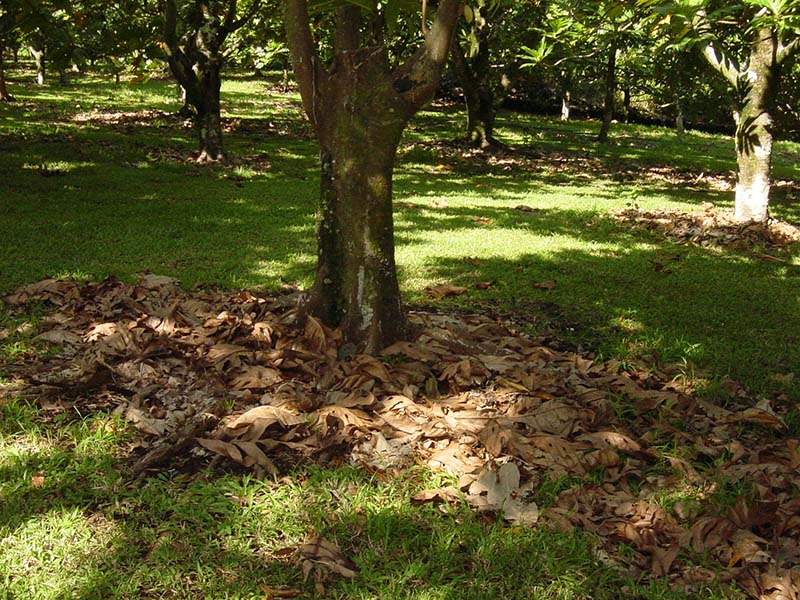 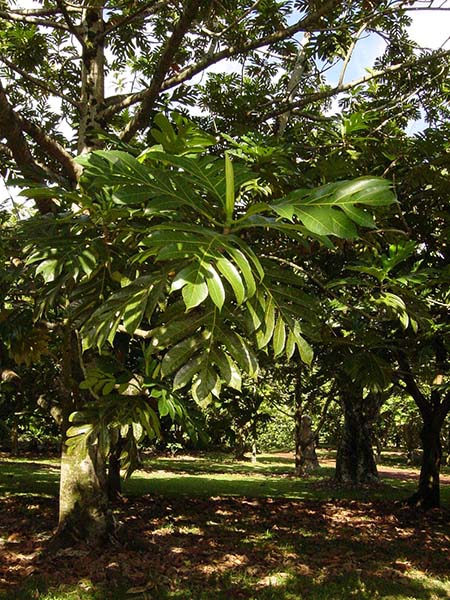 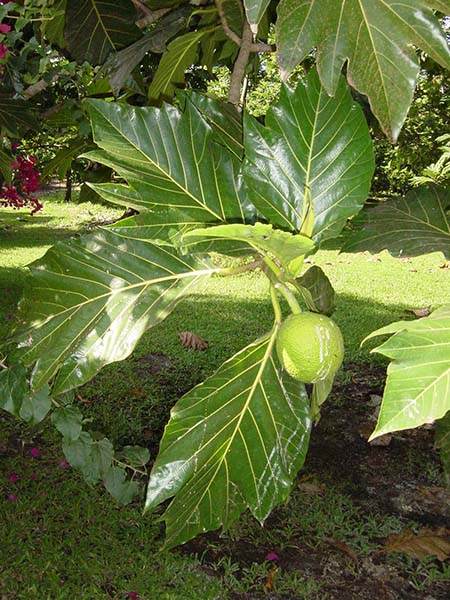 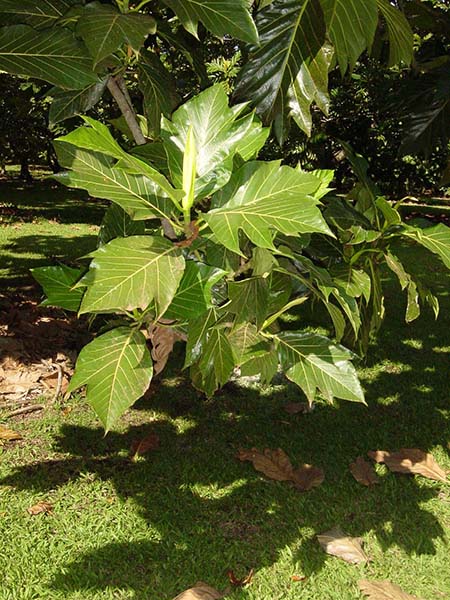 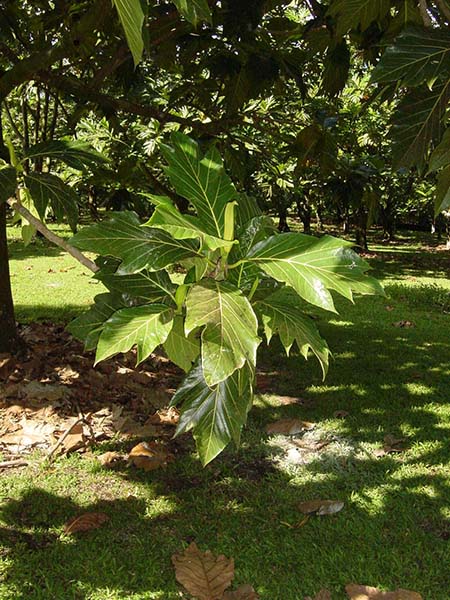 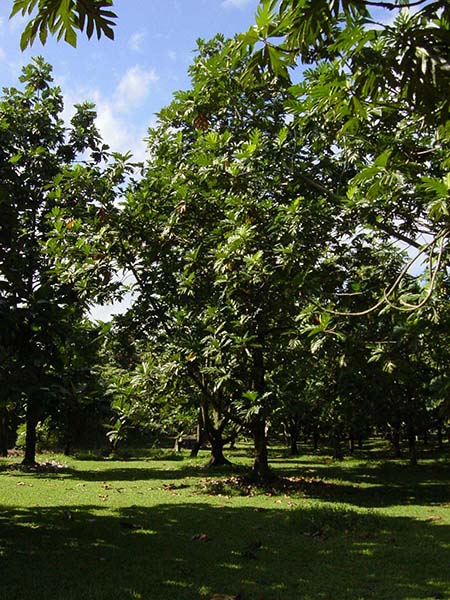 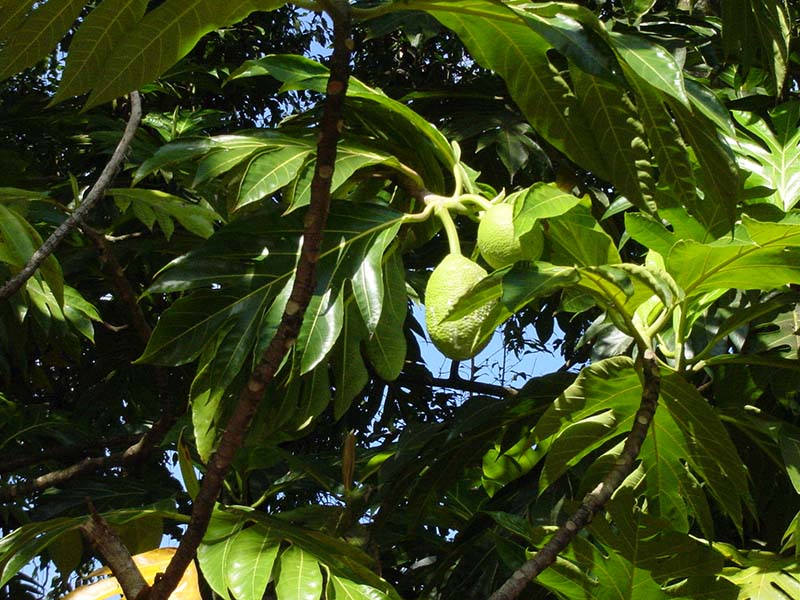 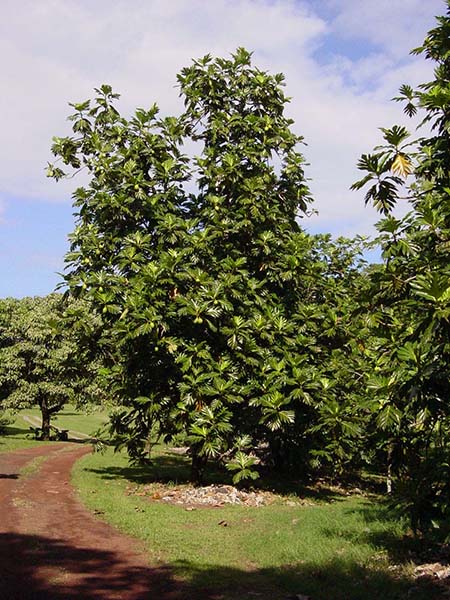 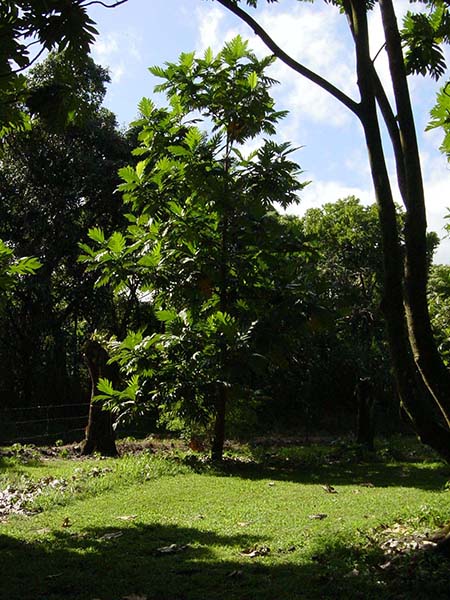 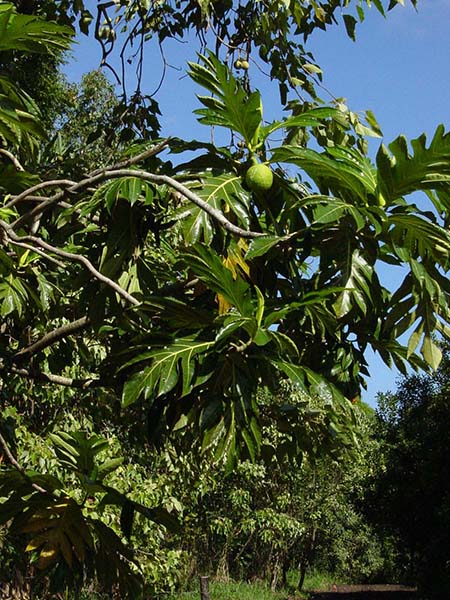 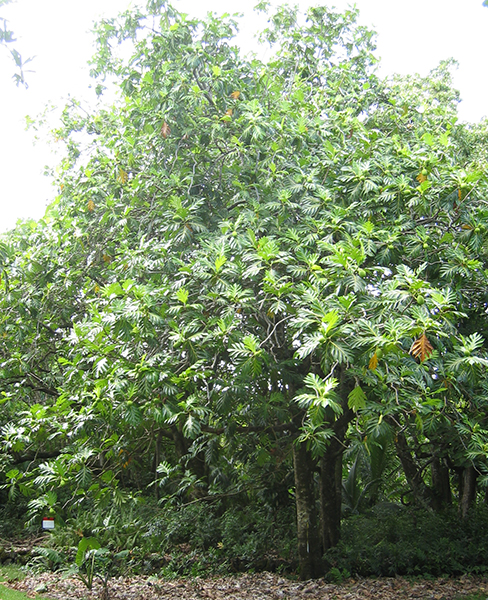 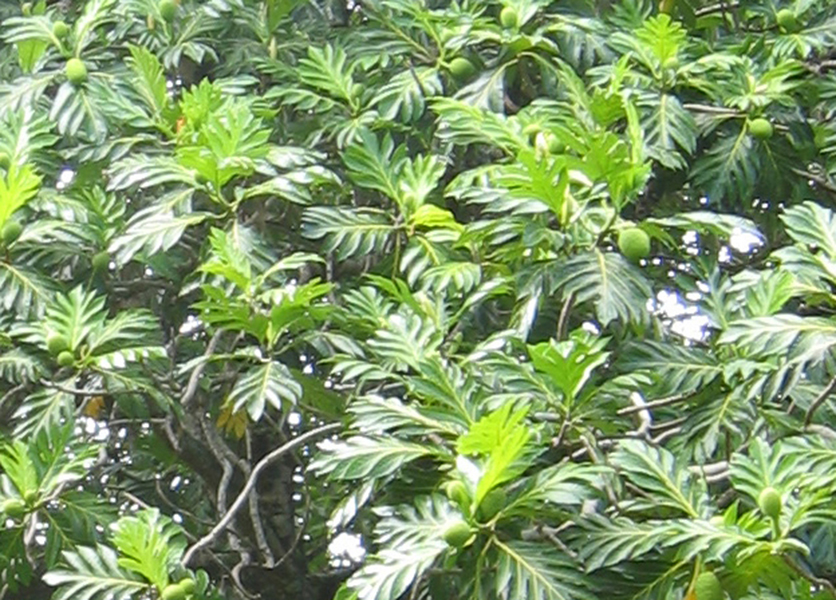 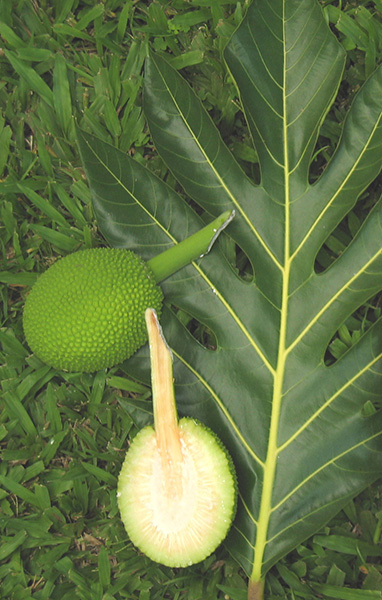 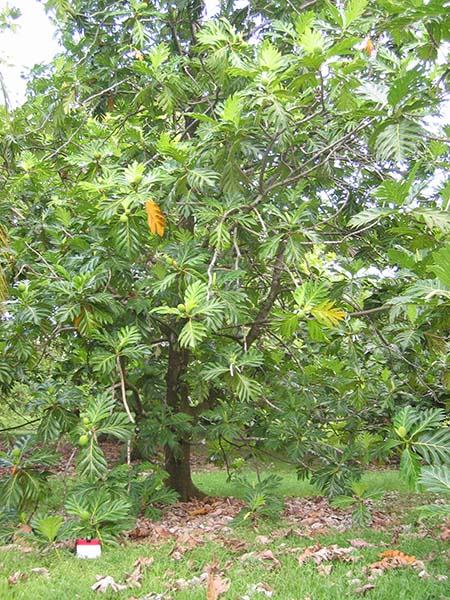 See: https://ntbg.org/breadfruit/about/ at the Breadfruit Institute. These attractive trees usually grow to be about 12-15 m but can reach heights of 20 m or more. The trunk can grow to be about 2 m in diameter. The same tree has both male and female flowers (termed monoecious) and the male inflorescence appears first. The male flowers are 5 cm in diameter and up to 45 centimeters long. Thousands of tiny flowers are attached to the spongy core. Female inflorescences consist of 1500-2000 reduced flowers also attached to a spongy core. The flowers fuse together and form the fleshy edible part of the fruit. The size of leaves is variable depending on the variety, ranging from 15-60 cm long. The fruits also vary in shape, size, color and texture. The skin texture is smooth, to slightly bumpy or spiny. The color varies from light green, yellowish-green, or yellow when mature. There is one unusual variety from the Society Islands that has pinkish or orange-brown skin. Throughout the Pacific, breadfruit exhibits great morphological variability, ranging from true seedless varieties, to those with several small seeds or one to a few viable seeds, to varieties with numerous viable seeds. (Ragone, D. 1997. Breadfruit: Artocarpus altilis)

The latex, leaves, roots and bark of the breadfruit are used medically in the Pacific Islands. To treat broken bones and sprains, the latex is massaged into the skin and is bandaged onto the spine to relieve sciatica. Latex is also commonly used to treat skin ailments and fungus diseases such as "thrush", which is also treated with crushed leaves. Diarrhea, stomachaches and dysentery are treated by internally taking the diluted latex. The latex and sap from crushed stems of the leaves are used traditionally to treat sore eyes and ear infections. The root is used as an astringent and as a purgative, while the macerated root is used to treat skin ailments. Throughout many islands in the Pacific the bark is used to treat headaches. The yellowing leaf is brewed into tea and taken to reduce high blood pressure in the West Indies. It is thought that the tea also controls diabetes. Recent research has been conducted on the effectiveness of use in treating tumors and leukemia. (Ragone, D. 1997. Breadfruit: Artocarpus altilis.)

Polynesians brought Breadfruit to the Hawaiian Islands because of the many uses they had for these important trees. Breadfruit trees provided food, medicine, clothing material, construction materials and animal feed. The trees are traditionally used and are a major component in mixed cropping agroforestry systems. Breadfruit creates a lush overstory that shelters a myriad of useful plants including yams, kava, noni, bananas and sweet potatoes. The wood of the Breadfruit tree is light and durable and is used for building houses or canoes. The inner layer of the bark was used to make kapa cloth as well as cordage. The leaves and flowers also had many uses. The leaves can be used as plates or to wrap food and the dried leaves of some varieties were used as a light sandpaper. The flowers have many ethnobotanical purposes and in Hawaii the dried flowers were burnt as mosquito repellent and used to make a yellow-tan dye. The latex is made into a gum and used to caulk canoes and used throughout the Pacific and other areas to catch birds for food and their feathers. (Ragone, D. 1997. Breadfruit: Artocarpus altilis) (Information for this species compiled and recorded by Camelia Cirnaru, NTBG Consultant.)

The wild, seeded, ancestral form of Breadfruit is Artocarpus camansi, or Breadnut. It is native to New Guinea, and possibly Indonesia and the Philippines. (Ragone, D. 1997. Breadfruit: Artocarpus altilis.)

Breadfruit can be cooked and eaten at all stages of growth. The mature fruits are most commonly eaten when mature but still firm and can be boiled, steamed, fried or baked. The small immature fruits can be pickled or marinated. The ripe fruits have a soft, sweet creamy flesh that can be eaten raw, but rarely are in the Pacific. Breadfruit was important in traditional diets because it is a good source of dietary fiber and potassium as well as Vitamin C, calcium and folate, and is low in fat and sodium. Generally, it is a very nutritious carbohydrate food. (Ragone, D. 1997. Breadfruit: Artocarpus altilis.)

Breadfruit provides food and shelter for important pollinators or seed dispersers such as honeybees, birds and flying foxes. (www.breadfruit.org)

Most legends about the Breadfruit tree are concerned with its origin. One such story comes from Raiatea. It says that during a time of famine, the people had to eat red dirt and ferns. A man and his family moved into the mountains and one night he told his wife to go outside in the morning and she would see "my hands become leaves, the trunk and two branches my body and legs, and the round fruit my head and the core the inside, my tongue." This was the birth of the first Breadfruit tree. The Hawaiian version of this story is similar but the god Ku, marries a Hawaiian woman and a breadfruit grew from his body after his death. Since Ku was a god and had magical powers, the tree was also considered magical. (Ragone, D. 1991. Ethnobotany of Breadfruit in Polynesia.)

Breadfruit, both the seeded and the seedless forms, do not naturally occur in the Pacific Islands but were first domesticated in the western Pacific and spread by humans throughout the area beginning 3000 years ago. Currently Breadfruit is cultivated on most Pacific Islands and several seedless varieties have been introduced to the Caribbean and other tropical varieties. (Ragone, D. 1997. Breadfruit: Artocarpus altilis.)

We currently have 139 herbarium specimens for Artocarpus altilis in our collection. Click on any specimen below to view the herbarium sheet data.