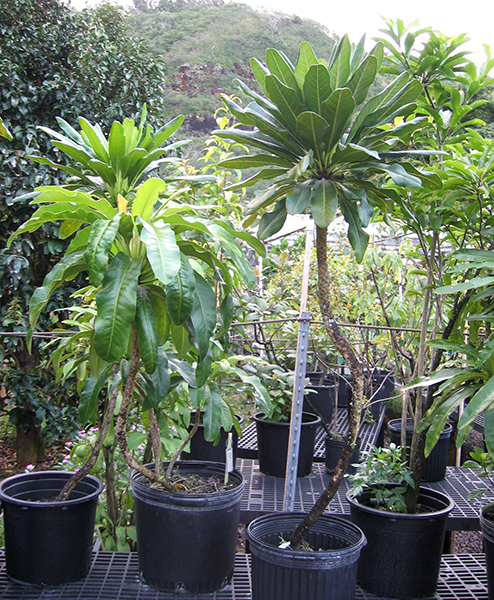 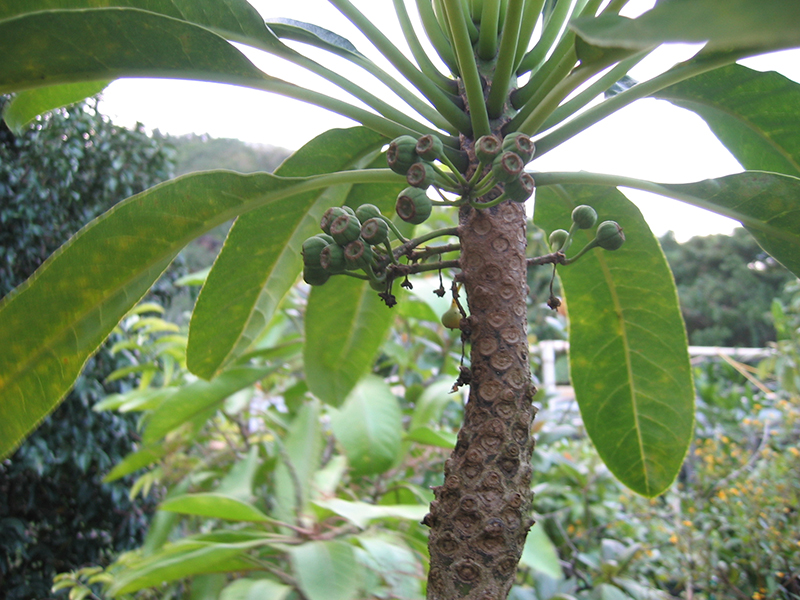 Cyanea coriacea or Haha is a shrub that grows to 3 meters tall and is sparingly branched with the leaves and inflorescences clustered near the top of the stem. The oblong leaves are large growing from 20-38 cm long and 6-12 cm wide and as the common name, Leatherleaf cyanea, suggests, they are somewhat thick in texture. The combination of the large leaves with the rounded leaf tips helps distinguish this species from other Cyanea species that are smaller and have pointed leaf tips. The stalks on which the leaves are borne, called petioles, can be from 5-16 cm long holding the leaf blades away from the stem and allowing positioning of the leaves to minimize shading by other leaves.
The flowers of all Cyanea species are strongly asymmetrical with a very distinctive and striking shape. The calyx (a ring of green petal-like structures borne outside of the petals) and corolla (a ring or petals) are fused forming a downcurved tube that has a single split on the underside. The petal lobes are widely spreading when the flower opens to reveal another tube formed from the fusion of the stamens (the pollen producing flower structures) with a tuft of white hairs on the stamen tube. The flowers of Haha are borne in inflorescences containing 12-20 flowers. The beautiful Haha flowers are white with purple tinges and are nestled amongst the leaf bases as the stalk supporting the inflorescence is very short. The fruit of this species is a purple, round berry that is 6-10 mm long and contain many brown to black, smooth seeds that are only 0.2-0.5 mm long.

Monitoring of endangered Cyanea species is underway on each of the Hawaiian Islands in efforts to maintain populations and increase the chances of this species survival. On each of the islands, botanists regularly monitor existing populations of threatened or endangered Cyanea species to document the health of and potential threats to these populations. Flowering and fruiting activity is documented and where possible seeds are collected for inclusion in the seed storage facilities. Micropropagation techniques, including tissue culture, are utilized where necessary to produce plants for outplanting to establish new populations. Surveys of suitable vegetation are conducted in attempts to locate any additional surviving individuals or populations. Fencing of existing populations of endangered Cyanea species is carried out where habitat destruction by pigs and grazing by ungulates reduces the survival of plants.

Cyanea coriacea or Haha is endemic to Kaua`i where it is found in mesic valleys between 150-220 m. This species is one of 52 Cyanea species in Hawaii making it the largest genus of native plants in Hawai`i and the largest genus in the family Campanulaceae. Cyanea species are very diverse; some species are trees, others are shrubs, and another grows like a vine. These different species are found in diverse habitats including mesic and wet forests at a wide range of elevations from 1000-2000m. All Cyanea species are thought to have evolved in Hawai`i from a single colonization event therefore they are particularly interesting to evolutionary biologists who study how new species develop. Three other closely related genera (Clermontia, Delissea, and Rollandia) are also considered to have evolved from this initial colonization event.

Little is known about the pollination vectors and seed dispersal agents of Cyanea species. Cyanea species may have co-evolved with the native bird species honeycreepers (Drepanidinae) and honeyeaters (Meliphagidae) that served as their pollinators. The extinction of a number of these native pollinators and seed dispersers may be associated with the reduction in population size and endangered status of many Cyanea species. Other factors that may threaten Cyanea species include habitat degradation and destruction by feral pigs, competition with alien plant species, herbivory by slugs, rats, and other introduced herbivores, human activities, and random environmental events that may eliminate remaining populations or individuals.

(USFWS, 2002. Endangered and Threatened Wildlife and Plants; Revised Determinations of Prudency and Proposed Designations of Critical Habitat for Plant Species From the Islands of Maui and Kahoolawe, Hawaii; Proposed Rule. April 3, 2002 Federal Register 67(64):15855-15904.)

The generic name Cyanea is derived from the Greek work “cyaneos” meaning blue in reference to the blue flowers of Cyanea grimesiana from which the genus Cyanea was first described.
Thirty-four Cyanea species are currently listed on the IUCH Red List of Threatened Species including species that, based on the available data, are considered to be extinct, threatened, critically endangered, or vulnerable.

(IUCN 2006. 2006 IUCN Red List of Threatened Species.
Monitoring of endangered Cyanea species to ensure their ongoing survival is being conducted. Many species, including the endangered species Cyanea kuhihewa, are represented by only one or a few individuals in the wild. Researchers have attempted to hand pollinate flowers produced by the single Cyanea kuhihewa individual in the wild to stimulate fruit and seed production; as yet the efforts have been unsuccessful. Scientists continue to research suitable tissue culture protocols to generate new individuals from vegetative tissue (stems or leaves) of mature individuals. In this way small leaf cuttings, when provided with the right nutrient conditions and plant hormones, produce undifferentiated plant cells that can differentiate into roots and shoots producing new plants. These new plants are genetically identical to the parent plant however with more plants the likelihood that one of these may flower and produce fruit is increased.

We currently have 44 herbarium specimens for Cyanea coriacea in our collection. Click on any specimen below to view the herbarium sheet data.