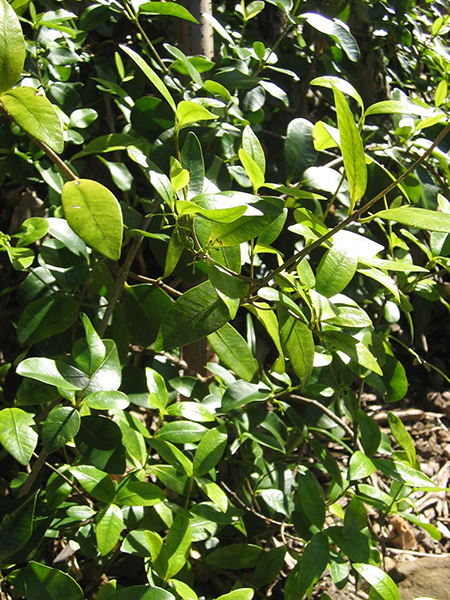 Alyxia stellata is a twining vine or a sprawling shrub. The leaves are smooth and glossy, dark green on top and paler underneath.
The leaves can be up to 3 1/2 inches long and occur in groups of two, three, or four. The leaves and bark have a pleasant fragrance which is released when they are crushed or twisted. The tiny flowers are greenish to yellowish white with 5 petals and 5 sepals, simple or in cymes. The fruits of Alyxia stellata are oval and dark purple when ripe. They are divided into two, three, or four segments each containing a seed.
(Wagner,W.L., D.R. Herbst, and S.H. Sohmer. 1990. Manual of the Flowering Plants of Hawaii.)
(NTBG. 1998.)
Prized by the ancient Hawaiians as the noblest of all lei materials, Maile has been respected and loved for many generations, and continues to be loved today. The leathery and woody leaves and bark have an enchanting fragrance, not noticeable until they are crushed or twisted, which increases with age and desiccation.
It was often referred to in songs, hulas and chants. Maile was dedicated to the Goddess of the hula, Laka, and was always presented on her altars. Thus Maile is one of our heritage plants associated with spirituality, gods and goddesses.
(Kepler, Angela K. 1984. Hawaiian Heritage Plants.)

Alyxia stellata is found in Australia, New Caledonia and into the Pacific as far as Hawaii and Henderson Island.
(Middleton, D.J. 2000. 2001. Revision of Alyxia, Apocynaceae.)

Alyxia stellata is an Hawaiian indigenous plant. It grows in a wide variety of habitats ranging from dry areas to wet forests.
It occurs from near sea level to elevations of 6,500 feet. It is currently found on all the main islands except Kaho'olawe and Ni'ihau.
It is likely that Alyxia stellata grew on those islands as well, but has become extinct due to extensive habitat disturbance.
(Wagner,W.L., D.R. Herbst, and S.H. Sohmer. 1990. Manual of the Flowering Plants of Hawaii.)

We currently have 142 herbarium specimens for Alyxia stellata in our collection. Click on any specimen below to view the herbarium sheet data.