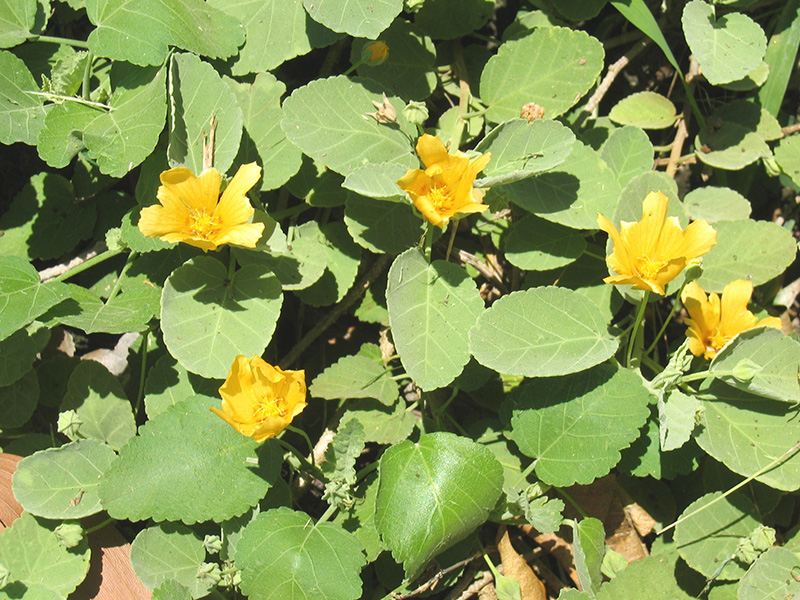 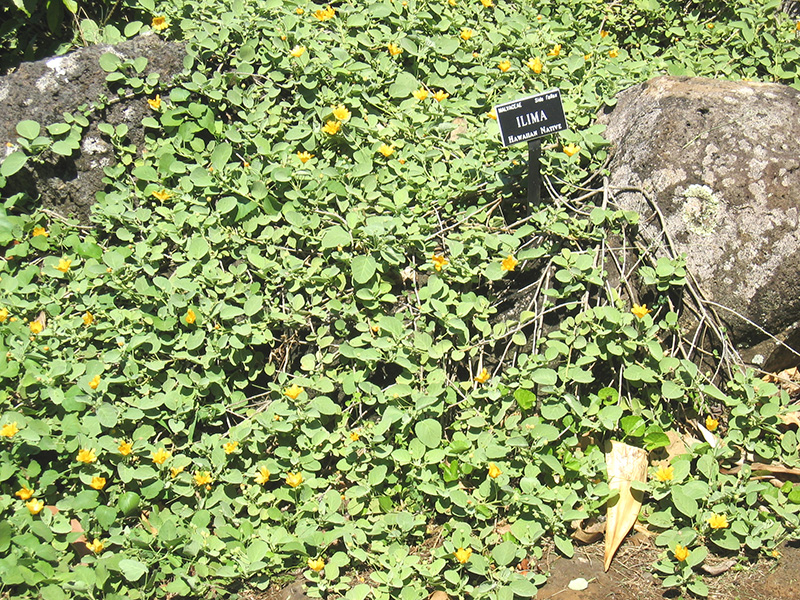 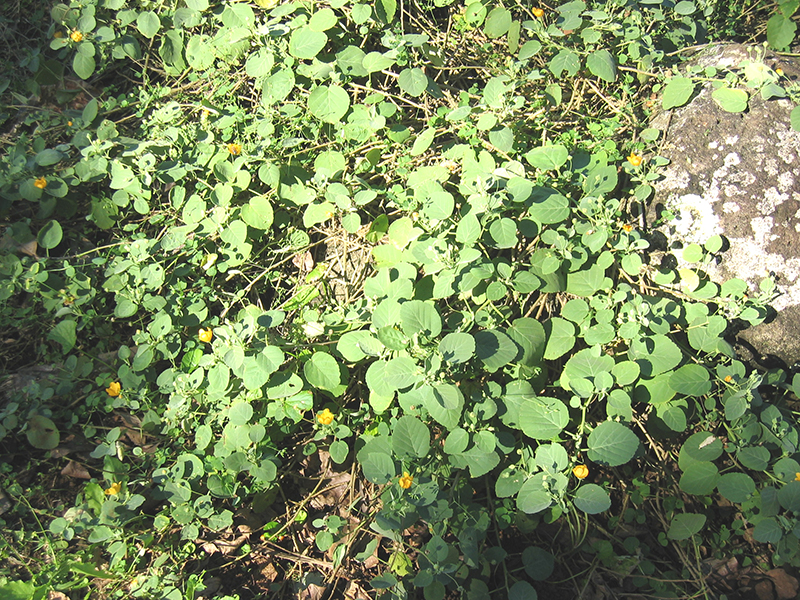 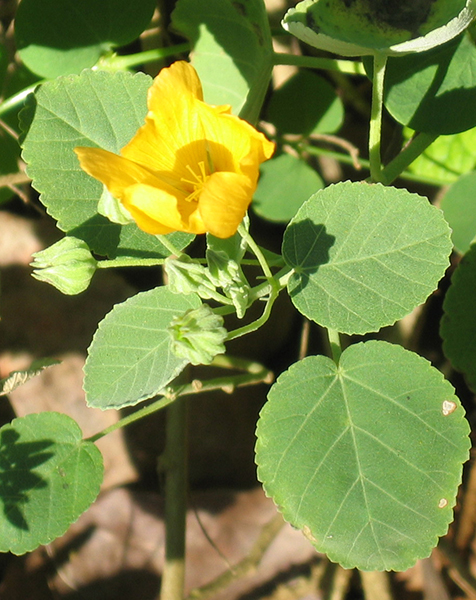 Sida fallax is an extremely variable plant. Individual plants of this species vary in height, leaf size and shape, degree of hairiness, flower color and size. Sida fallax ranges in habit from a prostrate to an erect shrub. The prostrate forms, called "`ilima papa", are most often 15 to 30 cm tall and grow in coastal areas. As a shrub, Sida fallax is usually less than 1.5 m tall, but can sometimes grow up to 3 meters in height. The leaves are alternately arranged along the stem, and their shape varies from somewhat elongated to almost round, 1 to 12 cm long, with serrate (saw-like) edges. The upper leaf surfaces are bright green while the lower surfaces are generally covered with dense hairs giving them a light velvety appearance. The most frequently encountered wild form has small yellow to orangish-yellow flowers that are either solitary or in clusters at the ends of the branches. The tubular flowers have 5 petals that are about 2.5 cm in diameter. The stamens (male reproductive structures) form a column that surrounds the stigma and style (female reproductive structures) in similar fashion to the hibiscus flower to which `ilima is related. The flowers bloom year-round and produce capsules that contain several small brown to black, angular seeds. The seeds of `ilima readily germinate and develop into short-lived perennial shrubs.
(Wagner,W. L., D. R. Herbst, and S. H. Sohmer. 1990. Manual of the Flowering Plants of Hawai`i)
In traditional Hawaiian medicine, `ilima flowers were used with other plants to assist women during pregnancy. A mixture of the flowers and root bark is also reported as a treatment for asthma.
(Akana, Akaiko. 1922. Hawaiian Herbs of Medicinal Value)
(Krauss, Beatrice H. 1979. Native Plants Used As Medicine in Hawaii)

`Ilima is highly esteemed by the Hawaiian culture for its delicate blossoms used to make garlands (lei). It was one of the few non-food plants cultivated by ancient Hawaiians and they have sevaral named varieties. The most preferred variety for making garlands is "Royal 'ilima" or "ilima lei", which has large orange-yellow flowers. In old Hawai'i, as in many other countries, yellow and gold were, and still are, special colors. `Ilima leis were given to departing friends, as this reputedly brought good luck. Each lei requires about 500 flowers and a great deal of patience to make.
(Kepler, A. K. 1984. Hawaiian Heritage Plants)

Sida fallax is naturally distributed from tropical China to Eastern Polynesia. In Hawai'i, Sida fallax grows on rocky or sandy coasts, on raised limestone reefs, lava fields, and dry to moist forests up to 1,980 meters elevation. It occurs on all the main islands and also on Midway Atoll and Nihoa islands. Various forms of Sida fallax tend to occur in specific habitats in the Hawaiian islands. The prostrate forms occur on arid exposed coastal locations whereas the shrubbier forms are generally found in moist woodland habitats.
(Wagner,W. L., D. R. Herbst, and S. H. Sohmer. 1990. Manual of the Flowering Plants of Hawai`i)
‘Ilima once held the title as the Hawaiian Kingdom's national flower before it was replaced by its larger red-colored cousin, Kokio ’Ula. Royal ‘ilima now holds a lesser distinction as the flower of Oahu.
(Kepler, A. K. 1984. Hawaiian Heritage Plants)

We currently have 130 herbarium specimens for Sida fallax in our collection. Click on any specimen below to view the herbarium sheet data.