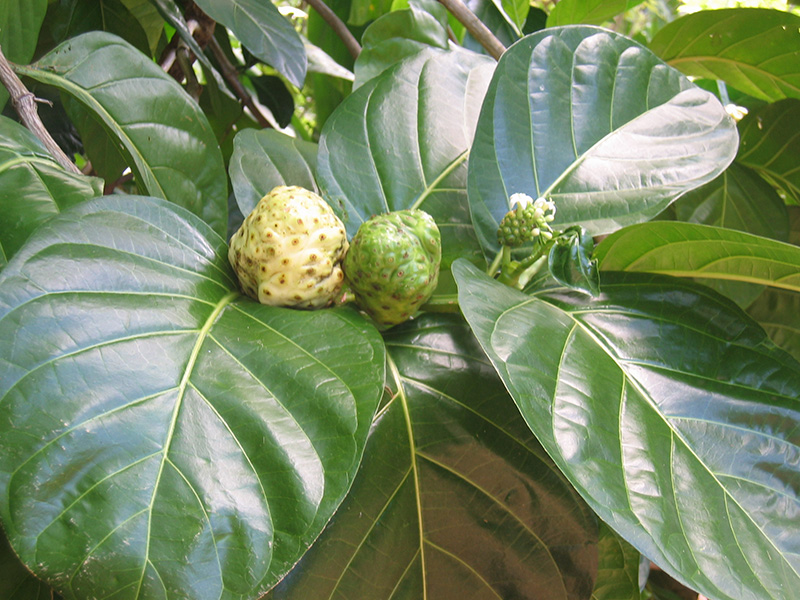 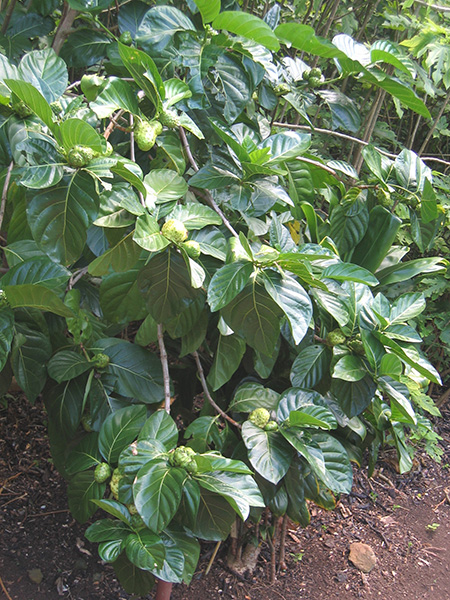 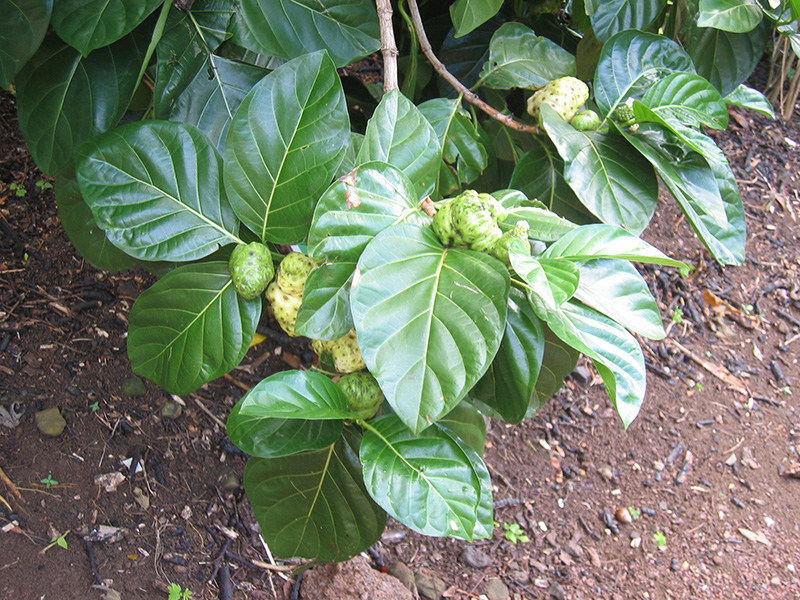 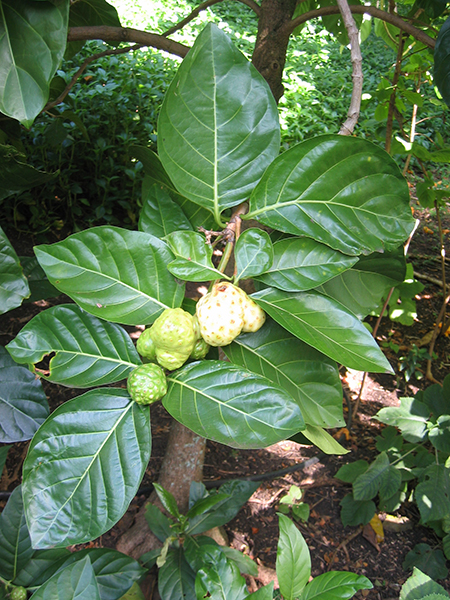 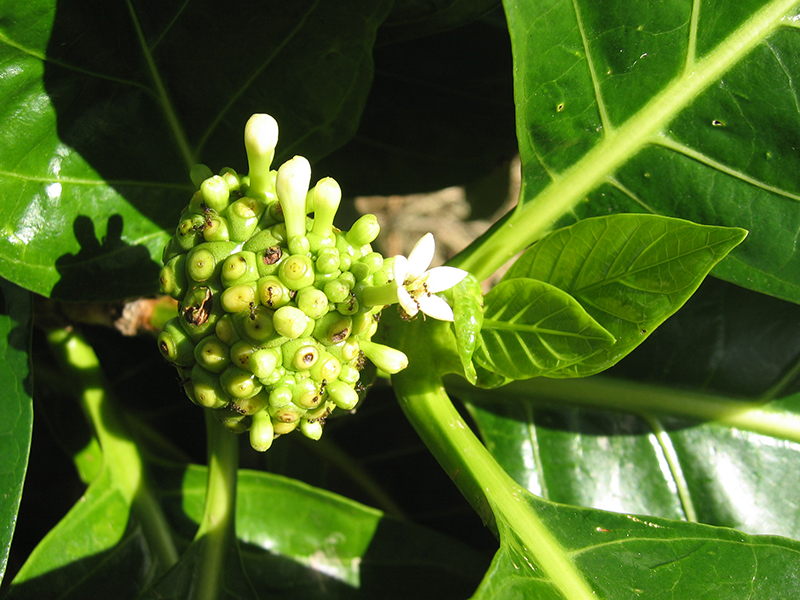 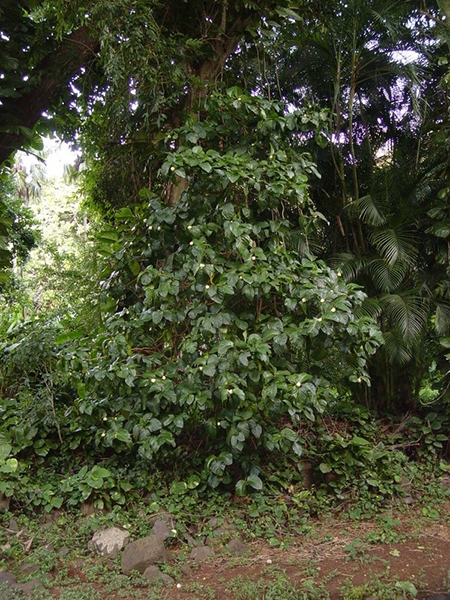 Noni is a small evergreen shrub or tree, usually less than 10 feet high, occasionally rising to 20 feet. The conspicuous large dark green shiny leaves are generally paired, except where forming fruit. Thick and oval in shape, these leaves are deep veined, short-stemmed and 8 inches or longer. The flowers form in globose heads, about an inch long and bearing many small white flowers. The flower heads grow to become mature fruit, 3 to 4 inches in diameter. The fruits resemble those of 'Ulu, Breadfruit, only smaller. The surface is divided into somewhat warty polygonal pitted cells. The Noni fruit begins green, turns a waxy yellow, and as mentioned, has an unpleasant, insipid, foul or fetid odor, especially as it ripens to whiteness and falls from the tree.
One of Noni's special interests is its specialized seeds. Although they cannot travel long distances at sea, they do possess a woody watertight airsac that enables them to float between closely spaced islands. Noni's seeds can survive over a year in salt water and still germinate.
(Wagner,W.L., Herbst,D.R.,Sohmer,S.H. 1999. Manual of the Flowering Plants of Hawai'i.)
(Kepler,A.K. 1983. Hawaiian Heritage Plants.)

Morinda citrifolia was probably the most widely and commonly used medicinal plant prior to the European Era. The practice of poulticing boils is a traditional remedy shared by all the Polynesian peoples. The leaves are typically heated over a fire before they are applied to a boil. Also they are applied to cuts, abscesses and inflammations.
In Samoa and Tonga the crushed or chewed fruit, or occasionally other parts of the plant, are commonly used for treating infections of the mouth and gums, and for sore throat and toothaches. In Samoa, the flowers are employed in treating styes (matafa), while in Tonga and Niue, vapor from the broken leaves is used for this purpose. In Tonga, an infusion of the leaves or bark is sometime used to treat stomachache, and the leaves are commonly used in massage for "ghost sickness". Also, in Samoa juice from the crushed leaves is sometime dripped into the eyes, nose, or mouth for the same purpose. The traditional use of Morinda as a "ghost medicine" is based on the belief that ghosts are repelled by the plant's odor.
In Hawai'i, in addition to using Noni for boils, wounds, and fractures, the fruit is used to prepare a tonic for ailments such as diabetes, high blood pressure, and loss of appetite.
In Tahiti, Morinda is used for treating diabetes, fish poisoning, stings from reef fish(nohu), tonsillitis, abdominal swelling, burns, ranula (a swelling that develops bellow the tongue-commonly called double tongue), and inflammation of the fingers or toes.
(Whistler,W.A. 1992. Polynesian Herbal Medicine.)
(Petard. 1972.)
In the Cook Islands, the fruit, combined with Miro (Thespesia populnea) fruits and Tou (Cordia subcordata) leaves, are used to treat urinary tract ailments. The fruits alone are used sometimes in remedies for abdominal swelling and diaphramic hernia. Also, an infusion of the grated roots is sometime applied to the top of the head to treat stings from stonefish.(Whistler,W.A. 1992. Polynesian Herbal Medicine.)
In Fiji the young shoots in coconut oil are greatly esteemed for the cure of ringworm and similar affliction such as scabies and the itch, and for the treatment of acute rheumatic pains. The leaves are chewed and applied as a poultice for inflammation and rheumatism and a steam bath made from the leaves is used to relieve stiffness. The leaves are also used to treat boils and gastric ulcers, and to remove pus from an infected ear. The hot juice from the leaves and flowers is squeezed into ulcers, and the leaves then used as a bandage. The fruit is also used to treat ringworm, and the bark is used with the leaves of Waro Turoto (Cayratia seemanniana) to treat sinusitis. The roots are used with those of Uci (Euodia hortensis) and Boiboida (Geniostoma vitiense) to treat malnutrition. The leaves are used with those of Waliaqilo (Psychotria sp) to treat hemorrhoids, and with the leaves of Alu (Epipremnum pinnatum) to relieve pregnancy pains. The grated root and fruit of the var. potteri is chewed morning and evening to treat a sore throat, while a preparation made by pounding and straining the young fruit is applied directly to mouth ulcers and hemorrhoids. Swollen testicles or hernia are treated with fluid pressed from the stem. Pain caused by barbs or poisonous fish may be relieved by holding the affected area in the steam of boiling leaves. To aid the removal of a splinter, a leaf is held over the cut.
In Tonga the plant is commonly used to treat diarrhea in infants, while the crushed leaves moistened in water are applied to aching joints or massage into aching muscles. The fruits are crushed and the juice dripped onto aching teeth or sore gums. The leaves are used in general tonics.
In Samoa the leaves are used to cure rheumatism and in cases of filarial swellings, or swellings of joints.
In the Gilbert Islands, "te non", as the plant is called, may be used on its own, but more frequently it is combined with other ingredients in medicine used to treat skin or intestinal infections. For example, the leaves are used as a deodorant, while a concoction of the root with coconut is taken internally for scabies and skin eruption, or to bring a boil to a head. A concoction of the roots with Pandanus roots is used as a dressing for tropical ulcers or a large coral cut, while a combination of equal amounts of the ripe and unripe fruits is used to prepare a concoction which is taken to treat stomachache, diarrhea and blood in a stool.
(Cambie,R.C.and Ash,J. 1994. Fijian Medicinal Plants.)

In ancient times, Noni was a valuable dye plant. The substance responsible for the coloring properties is concentrated in the plant's roots and bark, and depending upon the age of the plant and the mordant used, produces a red or a yellow color. In Polynesia, the red color was made from the bark and the yellow color from the roots.
(Whistler,W.A. 1992. Polynesian Herbal Medicine.)

Noni was brought to Hawai'i by the Polynesians in their early migrations and today is naturalize in all of the main Hawaiian Islands.
Morinda citrifolia occurs from India to Eastern Polynesia but is originally native only to Southeast Asia, possibly only to the islands of Indonesia.
(Whistler,W.A. 1992. Polynesian Herbal Medicine.)
Due to the bad taste, the Noni fruit was eaten only in times of famine. (Whistler,W.A. 1992. Polynesian Herbal Medicine.)
However, some pacific islanders relished the noni fruit's foetid taste, eating it even when other foods were plentiful. In 1920, Niue islanders ate it regularly, and Filipinos made a jam from it, preferring the taste when it was fermented (Kepler, A.K.1983. Hawaiian Heritage Plants.) Also, the fruits were served as food for pigs.
(Whistler, W.A.1992. Polynesian Herbal Medicine.)
In a study, a team of Japanese researchers studied the effect of over 500 extracts from tropical plants on the K-ras-NRK cell (a precursor to certain types of cancer). The compound, damnacanthal, found in Morinda citrifolia (Noni), was found to be an inhibitor of Ras function. Ras cells were seeded into 96 plates and incubated at 33 degrees centigrade for 24 hours. The Noni plant extract was added and the cell morphology was examined every day for five days. The Ras function was inhibited by the injected plant extract. This same compound has been found to inhibit the Epstein-Barr virus early-antigen activation. The extract from the Morinda Citrifolia was found to be most effective in inhibiting Ras function among the 500 tested extracts.
(Induction of Normal Phenotypes in RAS transformed cells by Damnacanthal from Morinda Citrifolia.Hiramatsu,T.,Imoto,M.,Koyano,T.Umezawa,K.Cancer Letters 73.1993.161-166.)

The Hawaiian plant Morinda citrifolia might be effective in combating Mycobacterium tuberculosis, the bacteria that causes tuberculosis (TB). Scientists at the 2000 International Congress of Pacific Basic Societies in Honolulu, Hawaii, reported on studies that identified certain active chemicals in the Noni plant that were effective in eliminating the TB bacteria in the laboratory setting.
The conventional medical treatment for TB consists of a regimen of antibiotics taken over the course of several months. Effective treatment requires strict adherence to the treatment plan. The drugs used to treat TB may cause side effects such as gastrointestinal upset, hepatitis in some, drug interactions, hearing loss. But for the time being, antibiotics remain the only proven effective treatment for TB. Nevertheless, scientists continue to search for effective alternative approaches.
Researchers from the Philippines have tested a variety of plants, including the Noni, for antimicrobial activity in the presence of the tuberculosis bacteria. These tests were designed to determine whether chemicals in plants such as the Noni could destroy the bacteria that causes tuberculosis. What the researchers found was that extracts from the Noni plant killed 89% of the tuberculosis bacteria, which compares favorably with one of the currently prescribed drugs for TB called rifampicin. The researchers identified the active compounds in the Noni plant to be plant steroids, or phytosterols.
The significance of these research results is twofold. First, the phytosterols in the Noni plant may help resolve the serious health problem of antibiotic-resistant tuberculosis, and increasingly, multi-drug-resistant TB(MDRTB) by attacking the bacteria through a different mechanism than antibiotics. Treating MDRTB is challenging. Some drugs are not effective in combating drug-resistant strains of TB, and they often cause side effects. The research on the Noni plant may offer an effective alternative treatment, especially for those in Hawaii, which has one of the highest rates of antibiotic-resistant TB in the United States.
The research on the Noni plant represents an important breakthrough in the continuing search for plant compounds capable of effectively combating M. tuberculosis and its various strains. Still, more research is needed to evaluate Noni healing properties. (Saludes,J.,Garson,M.,Franzblau,S.,Franzblau,S.,Aguinaldo,A. Potential antimycobacterial agents isolated from the leaves of noni. Presented at:2000 International Chemical Congress of Pacific Basin Societies;December 18,2000;Honolulu, HI.)

We currently have 65 herbarium specimens for Morinda citrifolia in our collection. Click on any specimen below to view the herbarium sheet data.