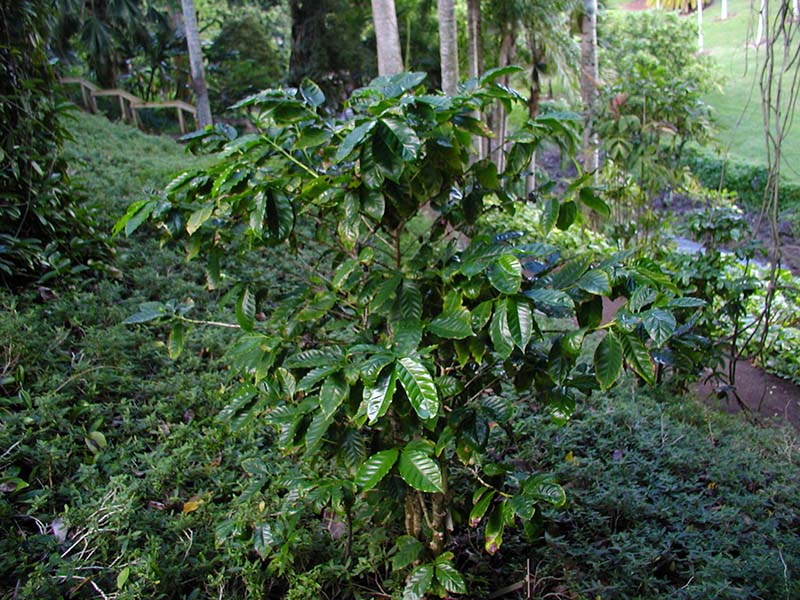 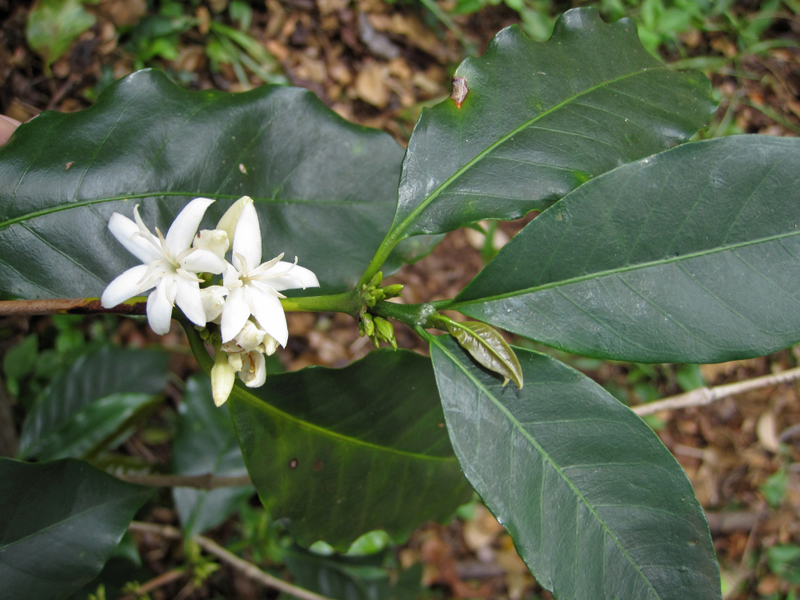 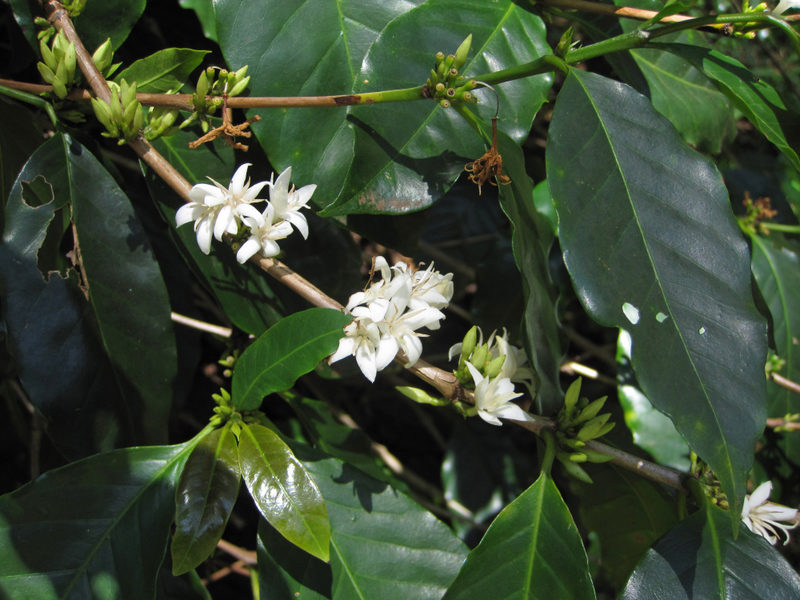 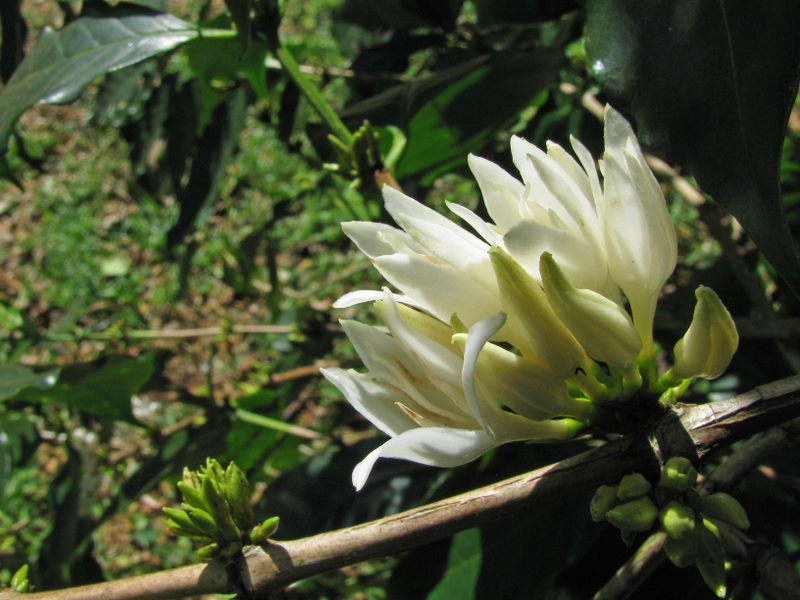 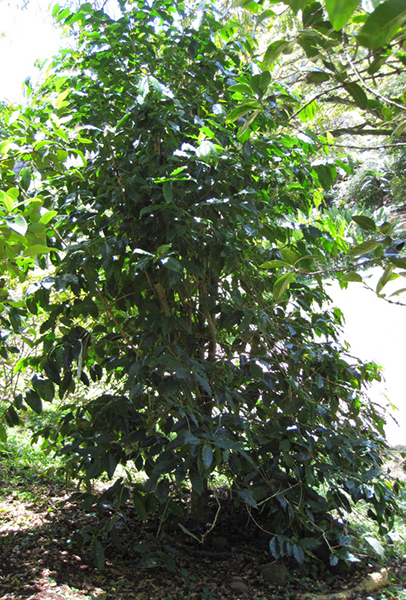 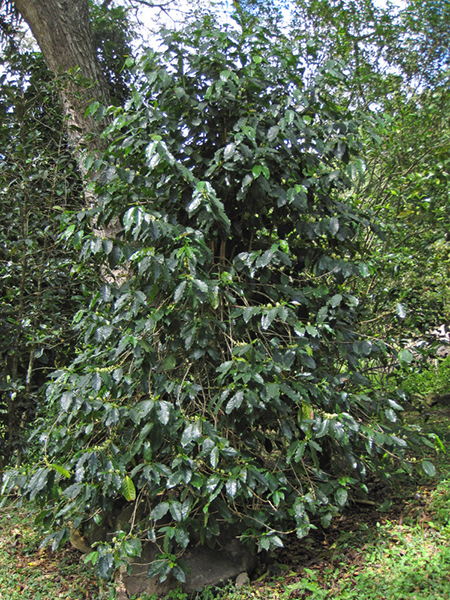 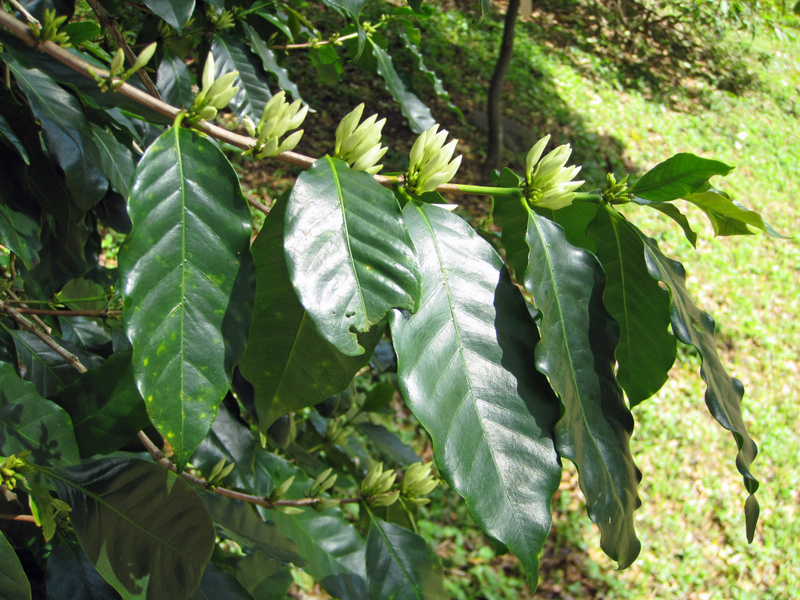 Coffee is an attractive small tree or shrub with dark glossy evergreen leaves. It prefers light shade and some varieties can grow into large trees. The flowers are white, star-like, fragrant, in axillary clusters which appear in the spring. The fruit are red when ripe, in the fall, with a sweet pulp surrounding the bean.
(Watson, L.and Dallwitz, M.J.1992.The Families of Flowering Plants.)
(Stone. 1970.)

In the green pharmacy Coffee is used in the treatment of flu, asthma, pulmonary problems, and fainting. Also a brew is made from both the leaves and the beans and drunk to accelerate labor.
Recorded medicinal properties of caffeine are: anticancer, antiHIV, antitumor-promoter, cancer-preventive, antibacterial, antiviral, cardiotonic, coronary-dilator, antiulcer, vermifuge, antieczemic, antiasthmatic, anticolitic.
(Schultes, R. E and Raffauf, R. F. 1990. The Healing Forest, Medicinal and Toxic Plants of the Northwest Amazonia.)
Reported to be analgesic, anaphrodisiac, anorexic, antidotal, cardiotonic, CNS-stimulant, counterirritant, diuretic, hypnotic, lactagogue, nervine, stimulant.
Coffee is reported as a folk remedy for asthma, atropine-poisoning, fever, flu, headache, jaundice, malaria, migraine, narcosis, nephrosis, opium-poisoning, sores, and vertigo. Also, caffeine is a widespread additive in over-the-counter diet pills, pain killers, and stimulants.
(Duke and Wain. 1981)
(List and Horhammer.1969-1979.)
(Duke. J.1984.)
By the 13th century, Coffee's restorative powers were well known in the Islamic world. Coffee was considered a potent medicine, as well as a religious potion that helped keep people wake during prayers. Pilgrims of Islam spread the Coffee throughout the Middle East and by the end of the 15th century, coffeehouses had replaced mosques as favored meeting places.
Indonesians and Malaysians prepare an infusion from dried leaves.
With the spread of Ethiopians from Africa, to the Middle East, India, Europe, and the Americas, Coffea arabica has become one of the most popular coffee in the world.
(Donnelly, J. 1996. World wakes up to Ethiopias coffee.)
Coffee pulp and parchment are used as manures and mulches, and is occasionally fed to cattle in India. Coffelite is a type of plastic made from coffee beans. The wood of this shrub is hard, dense and durable. It takes a good polish and is suitable for tables, chairs, and turnery. Coffee with iodine is used as a deodorant.
(List and Horhammer. 1969-1979.)
Caffeine has been described as a natural herbicide, selectively inhibiting germination of seeds of Amaranthus spinosus (Rizvi et al. 1980.)

(Information for this species compiled and recorded by Camelia Cirnaru, NTBG Consultant.)
Native to the Ethiopian highlands Coffee tree is now cultivated in similar climates around the world, especially in Central and South America.
In the tenth century, Coffee was considered a food.
The Ethiopian nomadic mountain peoples of the Galla tribe, may have been the first to recognize Coffee's sustaining effect (but not as a beverage). These people gathered the Coffee beans from the trees that grew in the region, ground them up and mixed them with animal fat, forming small balls that they carried as rations on trips. Other indigenous tribes of Ethiopia ate the beans as a porridge or drank a wine created from the fermented crushed Coffee beans.
(Donnelly, J. 1996. World Wakes up to Ethiopias Coffee.)
Dried seeds "beans" are roasted, ground, and brewed to make one of the two most important beverages in the western world. In Arabia a fermented drink from the pulp is consumed. Coffee is widely used as a flavoring in ice cream, pastries, candies, and liqueurs.
(List and Horhammer.1969-1979)
Ethiopia is the birthplace of Coffee and not South America, which some believe. The indigenous Coffee trees (which some experts say, are the only native Coffee trees in the world) first grew in ancient "Abyssinia", which is now present day Ethiopia. These trees blossomed in an area called "Kaffa" and the trees were called Kafa trees, which may as well be the root word for Coffee.
(Donnelly, J. 1996. World Wakes up to Ethiopias Coffee.)
This history of coffee begins with a legend that takes place around 800 CE. In this legend an Ethiopian goat herd named Kaldi was out tending his herd of goats one day, when he noticed some of the goats were eating these bright red berries on some nearby shrubs. After consumption of the berries, the goats began to romp about playfully and dance with great vigor. Kaldi wondered why his goats were behaving the way they were, and decided to sample the cherry-like berries with the seeds for himself. He himself was then overwhelmed by a feeling of exhilaration and was romping with his flock. Afterwards, some say Kaldi himself went on to tell others about his discovery. Others say a monk who was nearby had witnessed the goings on and decided to pluck a few berries for himself and took them back to be shared with his brothers, thus the monastery experiencing extreme alertness to "divine inspiration".
(Encyclopedia Britannica. 2003.)

We currently have 32 herbarium specimens for Coffea arabica in our collection. Click on any specimen below to view the herbarium sheet data.