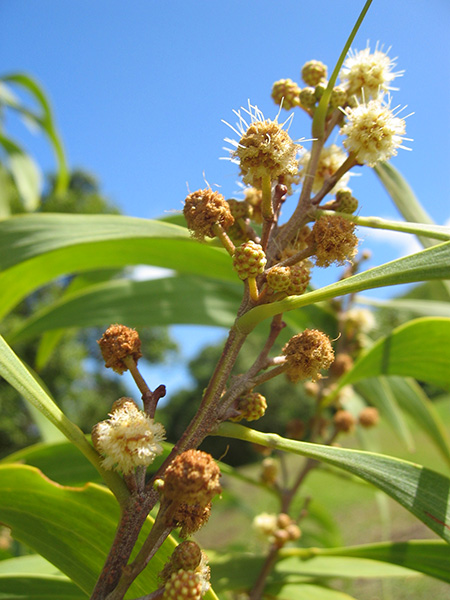 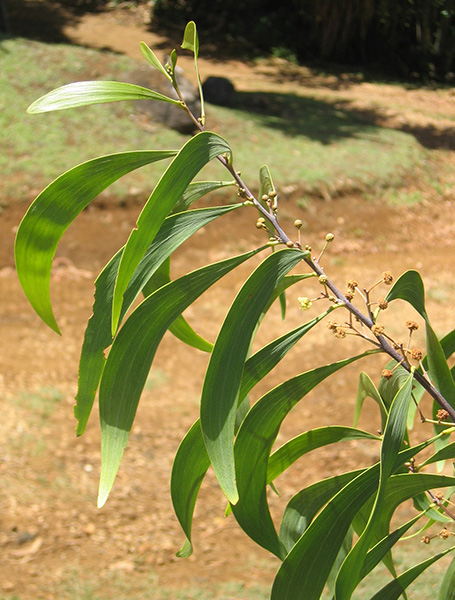 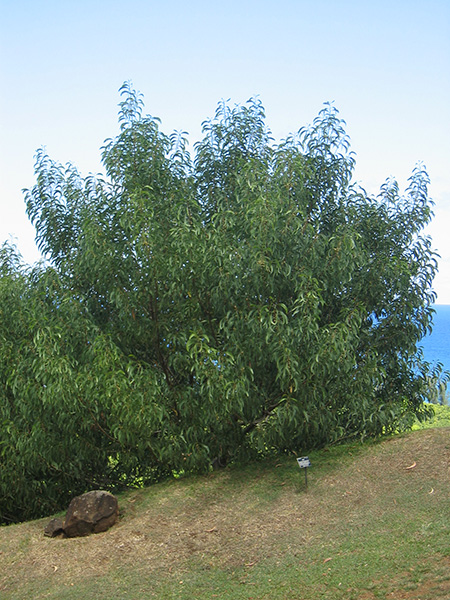 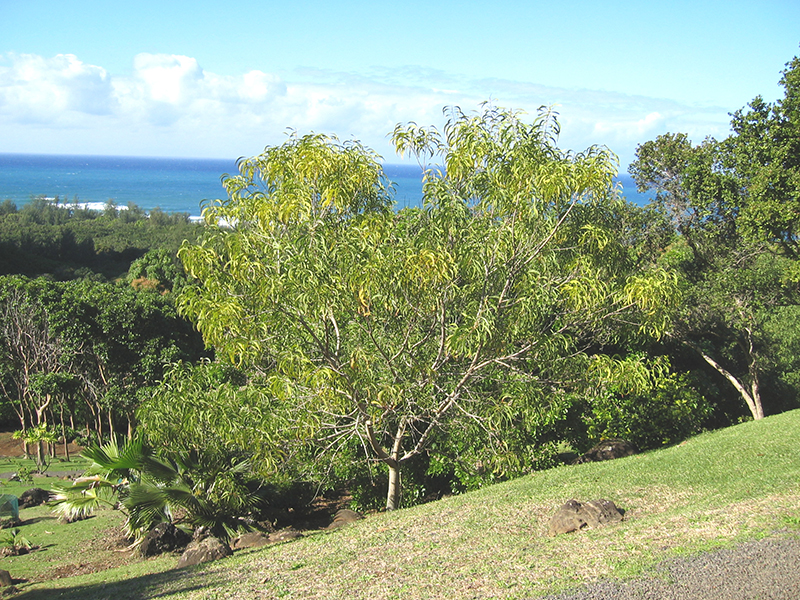 
There are two Acacia species endemic to Hawaii. The first, referred to as Acacia koa sensu stricto, is a fairly common Hawaiian tree that is well known for its decorative wood. The other, Acacia koaia, is a rare tree that is adapted to drier conditions and has harder wood, a smaller stature, and more gnarled appearance than its more common relative. The tree is somewhat unusual in that it produced two types of leaves. The younger leaves are twice compound and have a petiole with small leaflets. The mature "leaves" are not at all compound, they are modified leaf stems, or phyllodes, which function as leaves. These crescent-shaped phyllodes are gray-green and range from 3 to 9 1/2 inches in length. The small, yellow, powder-puff shaped flowers occur in clusters either at the ends of the branches or at the bases of the phyllodes. The flowers are formed in heads with cream-colored corollas, long, curled stamens (more than twice the length of the corolla) and pubescent ovaries. To distinguish between the common and rare species, a number of characteristics can potentially be used. Acacia koaia pods are laterally flattened with longitudinally arranged seeds, narrower pods and straighter phyllodes than Acacia koa sensu stricto which has wider pods, laterally arranged seeds, and more curved phyllodes. The seeds are contained in brown bean pods 1/4 to 1 inch wide and up to 12 inches long. (See also, Acacia koa.) (Bornhorst, Heidi L. 1996. Growing Native Hawaiian Plants.) (Wagner,W.L., D.R. Herbst, and S.H. Sohmer. 1990. 1999. Manual of the Flowering Plants of Hawaii.)

Acacia koaia leaves have been used from ancient times by Hawaiians to make a tea to "wash diseased skin". The tea was made from leaves and bark of Koaia plants (without the seeds) of Cassia occidentalis and Desmodium uncinatum. The treatment constitutes of steam bath and washing of the entire body with the prepared tea. (Kaaiakamanu, D.M. and Akina, J.K. 1922. Hawaiian Herbs of Medicinal Value.)

The National Tropical Botanical Garden (NTBG) currently has ex situ holdings in its seed bank, which represents four populations. In addition, individuals from four populations are growing at the McBryde and Limahuli Garden sites. Judy and Will Hancock are assisting the Hawai'i Forest Stewardship Program (Kalopi Dryland Forest Restoration) in restoring the ridges of Kohala, Hawai'i. They have been planting Acacia koaia on the leeward side of the Kohala Mountains since 1989 and claim that the shorter Acacia koaia are better adapted to the windy, dry Kohala landscape. The goal of the Kalopi project is primarily to restore native Hawaiian dryland forest. However, any wood from harvest from dead or thinned trees is valued for its beautifully grained wood (Hawaii Forestry News. 2000.) Research Management Needs: 1. Genetic studies are needed to confirm taxonomic and the phylogenetic status of Acacia koaia. 2. Genetic studies are also needed to confirm the distinctiveness between island populations. 3. Map genetic diversity in the surviving populations of Acacia koaia. 4. Test management strategies on invasive species and pest control for Acacia koaia. (Recommendations derived from Chapin,M.H.,Maunder M.and Wagner et all. 1999.) Ex Situ Needs: 1. Establish a full seed bank collection of Acacia koaia representing all available populations. 2. Development of proper horticultural protocols including pest management for Acacia koaia. 3. Survey ex situ holdings and conduct molecular fingerprinting. (Recommendations derived from Chapin,M.H. and Maunder,M. USFWS.)

Koaia was used for surfboards, paddles, and for framing grass houses. The bark provided dye to tapa, a light cloth made from the bark of Wauke (Broussonetia papyrifera). The Hawaiians ukulele is also made of this wood essence. It is interesting to note that Hawaiians of earlier times did not use this essence for bowls or platters because of an unpleasant flavor associated with the wood. (Wilkinson,K.M.and Elevitch,C.R. 2003. Growing Koa, A Hawaiian Legacy.) (Information for this species compiled and recorded by Camelia Cirnaru, NTBG Consultant.)

Acacia koaia is found on Kaua'i, O'ahu (possibly in the Ko'olau Mountains), Moloka'i, Lana'i, Maui and Hawai'i in low elevations in drier, open woodland habitats (USFWS. 2001.) The populations of A. koaia on Kauai tend to be intermediate and share certain characters with A. koa, such as a larger than typical growth habit and broader phyllodes. Further studies are required to understand this complex.

Originally covering vast expanses of mountain forests, Koaia trees were early sacrificed for ranchlands. One of only a handful of native trees capable of fixing nitrogen, Koaia enriches the soil around it, providing essential fertility to the plants nearby by dropping its nitrogen-reach leaf litter. The huge trees themselves provide life-giving niches for other plant life, including ferns, vines, fungi, lichens, and epiphytes. Koaia seeds fed some birds and insects directly, and thousands of other species of birds, snails, spiders and insects made their homes in Koaia trees, foraged for food off its bark, twigs, or leaves, and lived their lives in the Koaia tree. While many of these birds and insects are now extinct, those that remain still depend on Koa and Koaia forests for habitat. Over fifty species of insects found nowhere else on earth evolved specifically for Koa and Koaia species. The Kamehameha Butterfly, the native Blackburn's Butterfly, and the Koa bug favor Koaia. The abundance and distribution of most endangered forest birds including Hawaiian honeycreepers, the akiapola'au and the akepa are strongly linked to Koaia. Koaia trees also affect the climate, building the water holding capacity of soils, accumulating condensation and fog drip, and cooling the air. Because of its essential ecosystem functions, with so many other living things supported directly or indirectly, Acacia koaia is a key species in the ecology of the Hawaiian forests. The once extensive Koaia forests are severely diminished today. Only about 10% of the original Koaia forests are left. Many of the species of plants and animals associated with Koaia have gone extinct, and many of those that remain are endangered. The beautiful and unique Koaia wood, so fundamental to Hawaiian culture was named a "vanishing timber" by the National Academy of Science in 1979.(Wilkinson, K.M. and Elevitch, C.R. 2003.Growing Koa, A Hawaiian Legacy.) Threats to Acacia koaia include habitat degradation, grazing by goats, and invasion of habitat by alien plant species. Because it occurs in low elevations, it has been severely impacted by historic ranching, agriculture and human-caused fires.(NatureServe. 2001.)

Acacia koaia can be locally abundant in drier habitats, but this habitat is seriously threatened.(Wood, K. Pers.comm. 2002.) U.S. Fish and Wildlife Service has enough scientific information to warrant proposing these species for listing as endangered or threatened under the Endangered Species Act.

We currently have 40 herbarium specimens for Acacia koaia in our collection. Click on any specimen below to view the herbarium sheet data.