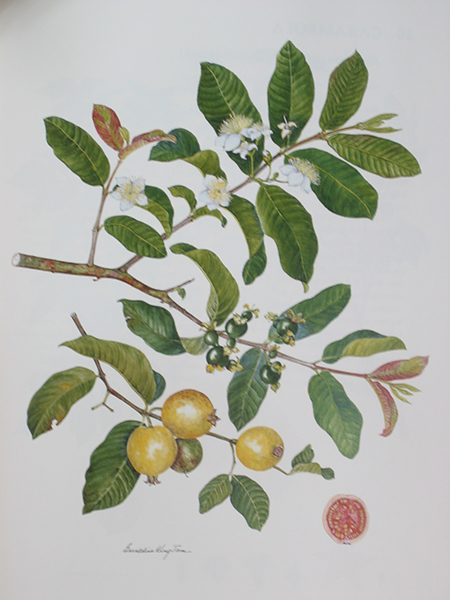 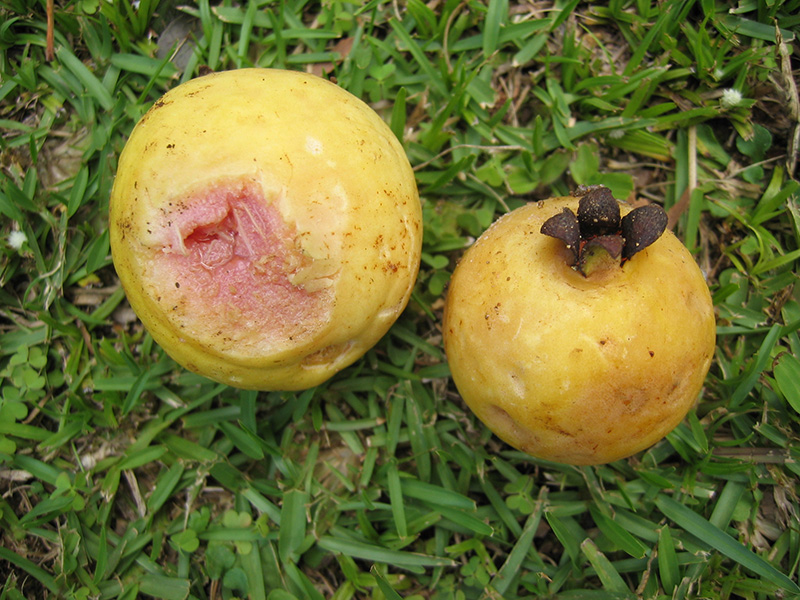 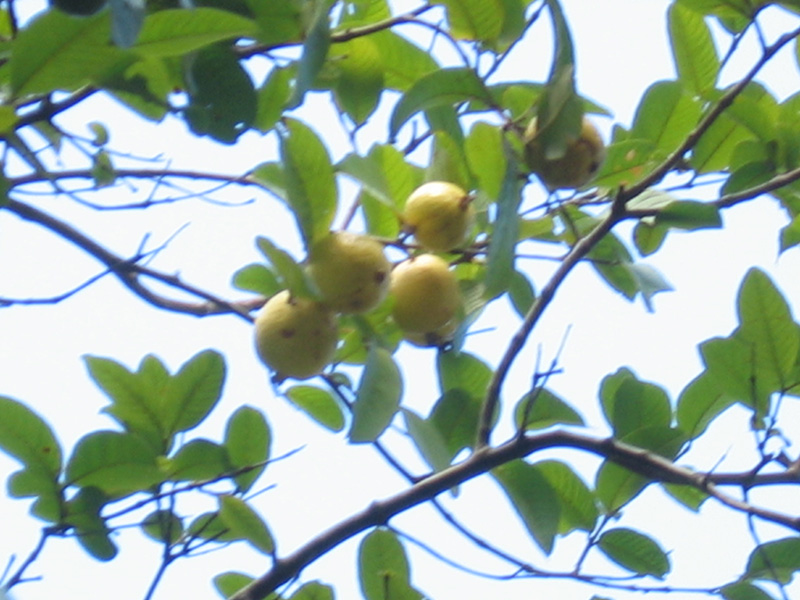 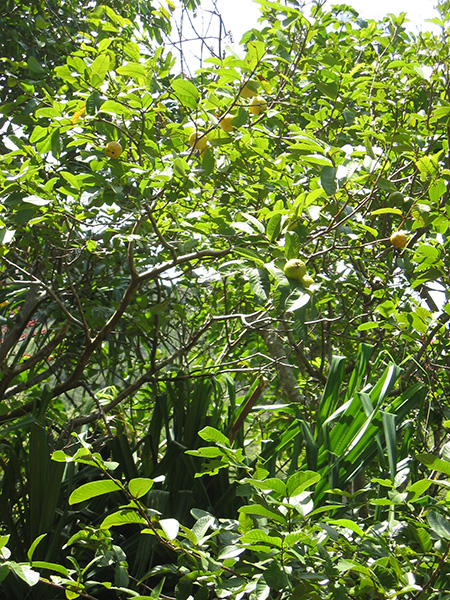 A small tree to 33 ft (10 in) high, with spreading branches, the Guava is easy to recognize because of its smooth, thin, copper-colored bark that flakes off, showing the greenish layer beneath and also because of the attractive, "bony" aspect of its trunk which may in time attain a diameter of 10 in (25 cm). Young twigs are quadrangular and downy. The leaves, aromatic when crushed, are evergreen, opposite, short-petioled, oval or oblong-elliptic, somewhat irregular in outline; 2 3/4 to 6 in (7-15 cm) long to 2 in (3-5 cm) wide, leathery, with conspicuous parallel veins, and more or less downy on the underside. Faintly fragrant, the white flowers, borne singly or in small clusters in the leaf axils, are 1 in (2.5 cm) wide, with 4 or 5 white petals which are quickly shed, and a prominent tuft of perhaps 250 white stamens tipped with pale-yellow anthers.
The fruit, exuding a strong, sweet, musky odor when ripe, may be round, ovoid, or pear-shaped, 2 to 4 in (5-10 cm) long, with 4 or 5 protruding floral remnants (sepals) at the apex with thin, light-yellow skin, frequently blushed with pink. Next to the skin is a layer of somewhat granular flesh, 1/8 to 1/2 in (3-12.5 mm) thick, white, yellowish, light- or dark-pink, or near-red, juicy, acid, subacid, or sweet and flavorful. The central pulp, concolorous or slightly darker in tone, is juicy and normally filled with very hard, yellowish seeds, 1/8 in (3 min) long, though some rare types have soft, chewable seeds. Actual seed counts have ranged from 112 to 535 but some guavas are seedless or nearly so.
When immature and until a very short time before ripening, the fruit is green, hard, gummy within and very astringent.
(Morton, J. 1987. Fruits of warm climates.)

Guava may have been domesticated in Peru several thousand years ago. Peruvian archaeological sites have revealed guava seeds found stored with beans, corn, squash, and other cultivated plants. Guava fruit is still enjoyed as a sweet treat by indigenous peoples throughout the rainforest, and the leaves and bark of the guava tree have a long history of medicinal uses that are still employed today.
The Tikuna Indians decoct the leaves or bark of guava as a cure for diarrhea. An infusion or decoction made from the leaves and/or the bark has been used by many tribes for diarrhea and dysentery throughout the Amazon. Indians also employ it for sore throats, vomiting, stomach upsets, for vertigo, and to regulate menstrual periods. Tender leaves are chewed for bleeding gums and bad breath, and it is said to prevent hangovers, if chewed before drinking. Indians throughout the Amazon gargle a leaf decoction for mouth sores, bleeding gums, or use it as a douche for vaginal discharge and to tighten and tone vaginal walls after childbirth. A decoction of the bark and/or leaves or a flower infusion is used topically for wounds, ulcers and skin sores. Flowers are also mashed and applied to painful eye conditions such as sun strain, conjunctivitis or eye injuries.
Guava leaves are used in the Dutch Pharmacopoeia for diarrhea, and the leaves are still used as a diarrhea treatment in Latin America, Central and West Africa, and Southeast Asia.
In Peruvian herbal medicine systems of today the plant is employed for diarrhea, gastroenteritis, intestinal worms, gastric disorders, vomiting, coughs, vaginal discharges, menstrual pain and hemorrhages, and edema.
In Brazil Guava is considered an astringent and diuretic and is used for the same conditions as in Peru. A decoction is also recommended as a gargle for sore throats, laryngitis and swelling of the mouth, and used externally for skin ulcers, and vaginal irritation and discharges.
(Taylor,L. 1998. Herbal Secrets of the Rainforest.)
(Morton, J. 1987. Fruits of warm climates.)

The wood of Guava is yellow to reddish, fine-grained, compact, moderately strong, durable indoors and it is used in carpentry and turnery. Though it may warp on seasoning, it is much in demand in Malaya for handles and in India, it is valued for engravings. Guatemalans use Guava wood to make spinning tops, and in El Salvador it is fashioned into hair combs which are perishable when wet. It is good fuelwood and as a source of charcoal.
The leaves and bark are rich in tannin (10% in the leaves on a dry weight basis and 11-30% in the bark). The bark is used in Central America for tanning hides. Malayans use the leaves with other plant materials to make a black dye for silk. In southeast Asia, the leaves are employed to give a black color to cotton and in Indonesia, they serve to dye matting.
In Mexico, the tree may be parasitized by the mistletoe, Psittacanthus calyculatus Don, producing the rosette-like malformations called "wood flowers" which are sold as ornamental curiosities.
(Morton, J. 1987. Fruits of warm climates.)

Guava has been cultivated and distributed by man, by birds, and sundry 4-footed animals for so long that its place of origin is uncertain, but it is believed to be an area extending from southern Mexico into or through Central America. It is common throughout all warm areas of tropical America and in the West Indies (since 1526), the Bahamas, Bermuda and southern Florida where it was reportedly introduced in 1847 and was common over more than half the State by 1886.
(Morton, J. 1987. Fruits of warm climates.)
Raw Guavas are eaten out-of-hand, but are preferred seeded and served sliced as dessert or in salads. More commonly, the fruit is cooked because cooking eliminates the strong odor. A standard dessert throughout Latin America and the Spanish-speaking islands of the West Indies is stewed Guava shells (cascos de guayaba), that is, Guava halves with the central seed pulp removed, strained and added to the shells while cooking to enrich the sirup. The canned product is widely sold and the shells can also be quick-frozen. They are often served with cream cheese. Sometimes Guavas are canned whole or cut in half without seed removal.
Bars of thick, rich Guava paste and Guava cheese are staple sweets, and Guava jelly is almost universally marketed. Guava juice, made by boiling sliced, unseeded Guavas and straining, is much used in Hawaii in punch and ice cream sodas. A clear Guava juice with all the ascorbic acid and other properties undamaged by excessive heat, is made in South Africa by trimming and mincing Guavas, mixing with a natural fungal enzyme (now available under various trade names), letting stand for 18 hours at 120º to 130º F (49º-54º C) and filtering. It is made into sirup for use on waffles, ice cream, puddings and in milkshakes. Guava juice and nectar are among the numerous popular canned or bottled fruit beverages of the Caribbean area. After washing and trimming of the floral remnants, whole Guavas in sirup or merely sprinkled with sugar can be put into plastic bags and quick-frozen.
There are innumerable recipes for utilizing Guavas in pies, cakes, puddings, sauce, ice cream, jam, butter, marmalade, chutney, relish, catsup, and other products.
Dehydrated Guavas may be reduced to a powder which can be used to flavor ice cream, confections and fruit juices, or boiled with sugar to make jelly, or utilized as pectin to make jelly of low-pectin fruits.
In South Africa, Guavas are mixed with cornmeal and other ingredients to make breakfast-food flakes.
Green mature Guavas can be utilized as a source of pectin, yielding somewhat more and higher quality pectin than ripe fruits.
(Morton, J. 1987. Fruits of warm climates.)

Guava fruits are much enjoyed by birds and monkeys, which disperse the seeds in their droppings and cause spontaneous clumps of Guava trees to grow.
(Taylor,L. 1998. Herbal Secrets of the Rainforest.)
Guava is rich in tannins, phenols, triterpenes, flavonoids, essential oils, saponins, carotenoids, lectins, vitamins, fiber and fatty acids. Guava fruit is higher in vitamin C than citrus (80 mg of vitamin C in 100 g of fruit) and contains appreciable amounts of vitamin A as well. Guava fruits are also a good source of pectin, a dietary fiber. The leaves of Guava are rich in flavonoids, in particular, quercetin. Much of Guava's therapeutic activity is attributed to these flavonoids. The flavonoids have demonstrated antibacterial activity. Quercetin is thought to contribute to the anti-diarrhea effect of guava, relax the intestinal smooth muscle and inhibit bowel contractions. In addition, other flavonoids and triterpenes in Guava leaves show antispasmodic activity. Guava also has antioxidant properties which is attributed to the polyphenols found in the leaves.
The long history of Guava's use has led modern-day researchers to study Guava extracts. Its traditional use for diarrhea, gastroenteritis and other digestive complaints has been validated in numerous clinical studies. A plant drug has even been developed from Guava leaves (standardized to its quercetin content) for the treatment of acute diarrhea. Human clinical trials with the drug indicate its effectiveness in treating diarrhea in adults. Guava leaf extracts and fruit juice has also been clinically studied for infantile diarrhea. In a clinical study with 62 infants with infantile rotaviral enteritis, the recovery rate was 3 days (87.1%) in those treated with guava, and diarrhea ceased in a shorter time period than controls. It was concluded in the study that Guava has "good curative effect on infantile rotaviral enteritis."
Guava has many different properties that contribute to its antidiarrheal effect: it has been documented with pronounced antibacterial, antiamoebic and antispasmodic activity. It has also shown to have a tranquilizing effect on intestinal smooth muscle, inhibit chemical processes found in diarrhea and aid in the reabsorption of water in the intestines. In other research, an alcoholic leaf extract was reported to have a morphine-like effect, by inhibiting the gastrointestinal release of chemicals in acute diarrheal disease. This morphine-like effect was thought to be related to the chemical quercetin. In addition, lectin chemicals in Guava were shown to bind to E. coli (a common diarrhea-causing organism), preventing its adhesion to the intestinal wall and thus preventing infection.
The effective use of Guava in diarrhea, dysentery and gastroenteritis can also be related to Guava's documented antibacterial properties. Bark and leaf extracts have shown to have in vitro toxic action against numerous bacteria. In several studies Guava showed significant antibacterial activity against such common diarrhea-causing bacteria as Staphylococcus, Shigella, Salmonella, Bacillus, E. coli, Clostridium, and Pseudomonas. It has also demonstrated antifungal, anti-yeast (candida), anti-amebic, and antimalarial actions.
In a recent study with guinea pigs (2003) Brazilian researchers reported that Guava leaf extracts have numerous effects on the cardiovascular system which might be beneficial in treating irregular heat beat (arrhythmia). Previous research indicated Guava leaf provided antioxidant effects beneficial to the heart, heart protective properties, and improved myocardial function. In two randomized human studies, the consumption of Guava fruit for 12 weeks was shown to reduce blood pressure by an average 8 points, decrease total cholesterol levels by 9%, decrease triglycerides by almost 8%, and increase "the good" HDL cholesterol by 8%. The effects were attributed to the high potassium and soluble fiber content of the fruit (however 1-2 pounds of fruit was consumed daily by the study subjects to obtain these results!). In other animal studies Guava leaf extracts have evidenced analgesic, sedative, and central nervous system (CNS) depressant activity, as well as a cough suppressant actions. The fruit or fruit juice has been documented to lower blood sugar levels in normal and diabetic animals and humans. Most of these studies confirm the plant's many uses in tropical herbal medicine systems.
(Taylor,L. 1998. Herbal Secrets of the Rainforest.)

We currently have 34 herbarium specimens for Psidium guajava in our collection. Click on any specimen below to view the herbarium sheet data.