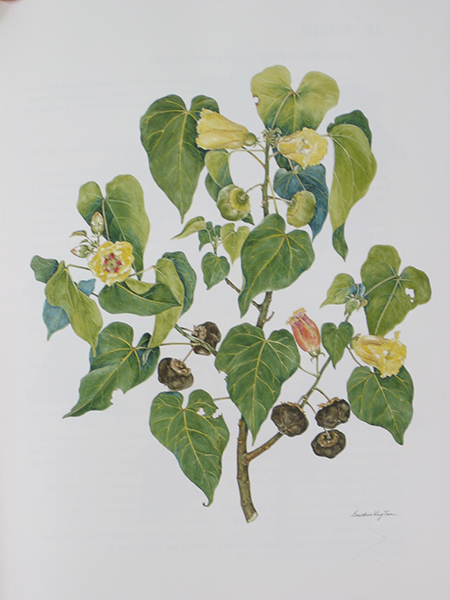 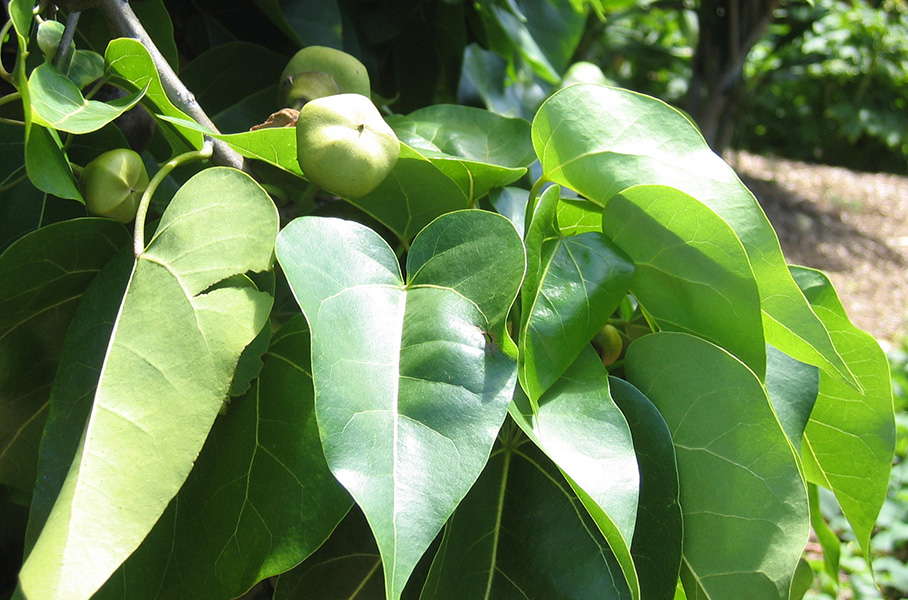 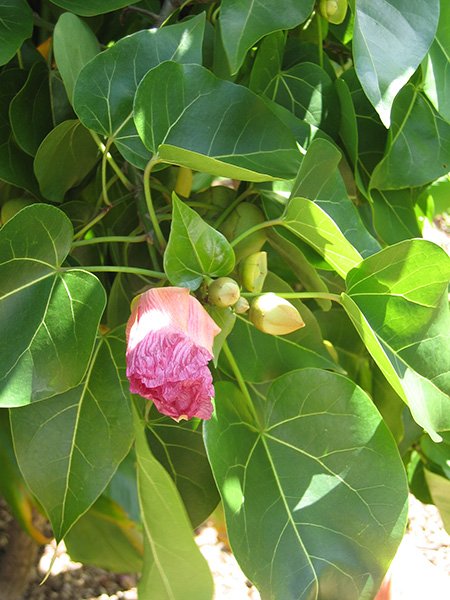 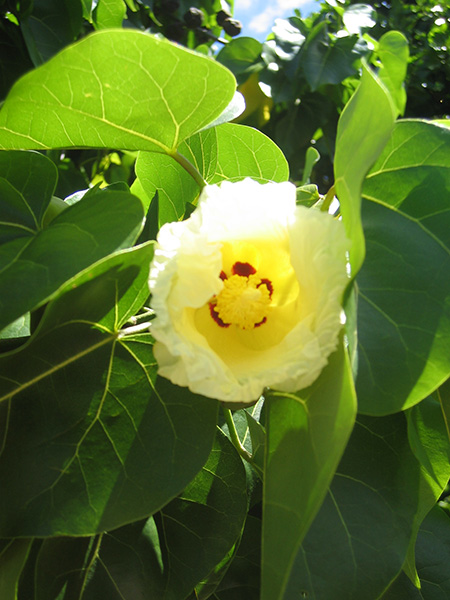 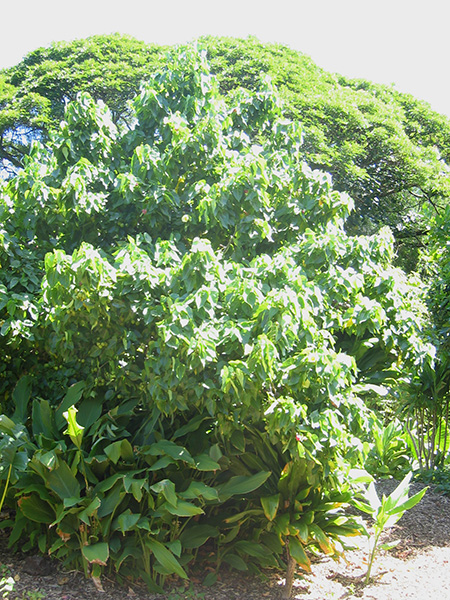 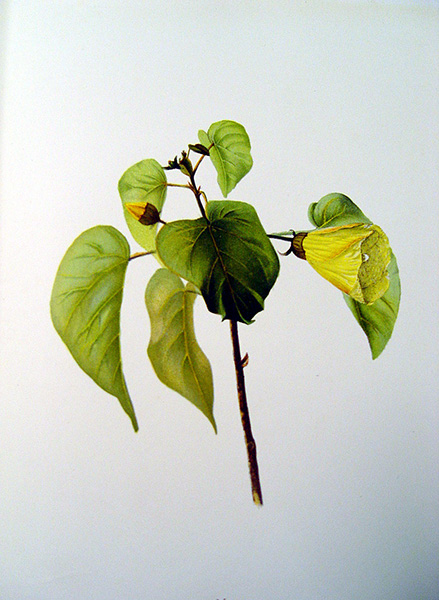 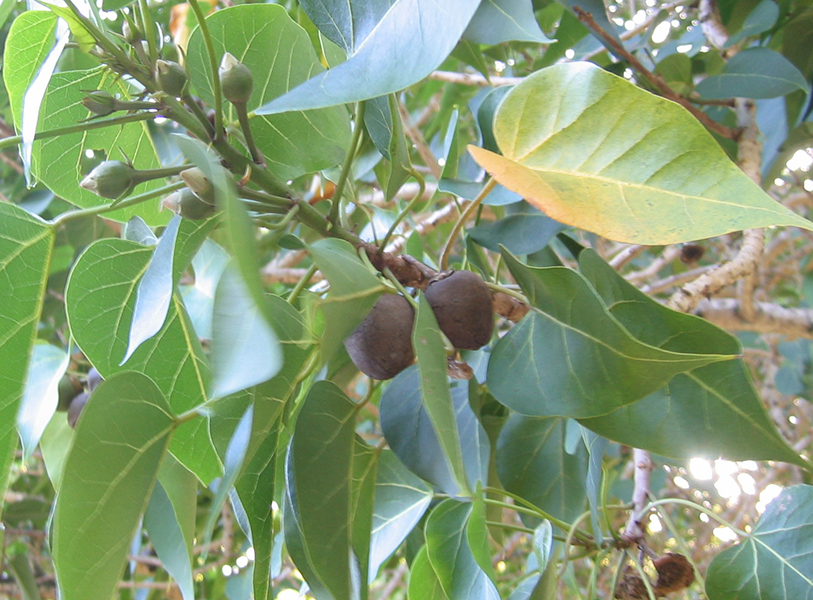 The milo tree is a small to medium-sized tree growing to less than 40 feet high. The trunk can be 2 feet in diameter at full maturity. The bark is corrugated, with scaly twigs. The branches are widely spread and usually horizontal, making for an ideal shade tree. The glossy heart-shaped leaves are 3-5 inches across. Young leaves are edible. Bell-shaped pale yellow flowers with maroon or purple centers turn purplish-pink as they with in their short one day hibiscus life. Following the flowering stage, the one inch diameter seeds grow in globular 5-celled woody cases that have downy hairs on their surface. These hairs remain on the plant for sometime and the cases ripen only in areas of dry climate.
The leathery seed capsules of Thespesia populnea are spherical and 1 to 2 inches in diameter. The grayish brown seeds are 1/4 to 1/2 inch long. The capsules generally open at maturity releasing about eight seeds. The capsules can also be opened by hand and the seeds removed.
(Watson, L.and Dallwitz, M.J.1992. The Families of Flowering Plants: Descriptions, Illustrations, Identification, and Information Retrieval.)

In India, the ground up bark is used to treat skin diseases and in Mauritius dysentery and haemorrhoids. Leaves are applied to inflamed and swollen joints in South India. Also, when cut, the young fruit secretes a yellow sticky sap used to treat ringworm and other skin diseases. Roots are used as a tonic. There is some modern investigation of the plant's effects on high blood pressure.

Brought to these islands by early Polynesian settlers who carried the seeds, this fast-growing evergreen tree was planted around the temples in Tahiti, as it was said to be spiritually connected to the chant and to prayer. It is a widespread species throughout Polynesia and Micronesia, as well as in tropical Africa.
Although rare today, in old Hawai'i milo was a commonly found tree, cultivated as a shade plant around homes near sunny coastal areas with loose soil.
The bark of milo was used for cordage fiber, similarly to hau, but it is inferior in quality to hau and to olona. The tree also yields tannin, dye, oil, medicine and gum, from various parts of the plant. The milo wood was skillfully crafted into poi bowls called 'umeke 'ai, and into plates, too. Calabashes (bowls) of kou wood were more highly prized than those of milo, and were used more often.
'Umeke 'ai is an honored implement in a Hawai'i home, for through the ceremony of eating poi(taro) one at a time from the bowl at the center, the traditions and protocol of Kanaka Maoli is maintained. The 'umeke'ai filled with kalo (taro) is considered the means of survival of the people of Hawai'i Nei.
'Umeke la'au is the Hawai'i name for these containers or calabashes of wood, which were used for the storage, transport and serving of food in various stages of preparation. Milo wood is flavorless, since it is lacking in any unpleasant-tasting sap that could contaminate stored food.

Other uses: The timber is hard, termite-resistant, has an attractive grain and dark-red colour, and is naturally oily so it can be highly polished (thus it is also called Pacific Rosewood). But the timber is often twisted and rarely found in large pieces so it makes only small items.
The tough fibrous bark is made into rope (Hawaii and elsewhere) but is not as good for this purpose as Sea Hibiscus is. The bark is also used to caulk boats in Malay. Corks are made from the inner bark.
A yellow dye is obtained from the flower and fruits, and a red one from the bark and heartwood.

Other products extracted from the plant includes tannin, oil and gums (a dark red resin exudes from the bark). A fast growing shrub that grows into a small tree with spreading branches, it casts welcome shade and in Hawaii were planted near homes for this purpose. In India, they were planted to provide shade in coffee and tea plantations.
(Morley, B.D. 1970. Wild Flowers of the World.)

Thespesia populnea is probably indigenous to Hawai'i, but it may have been introduced by the early Polynesians. It is found throughout the tropics in coastal areas. In Hawai'i, it has been documented on all the main islands except Kaho'olawe at elevations ranging from sea level to 900 feet.
A member of the Hibiscus family, the malvacceae, it is a close relative of hau, `ilima, and ma`o, Hawai`i cotton.
It does not grow in the high inland forests.
(Wagner,W.L.,Herbst,D.R.,Sohmer,S.H. 1990. Manual of Flowering Plants of Hawai'i.)
The fruits, flowers and young leaves are edible.

Like other mangrove associates, these plants provide shelter and food to many creatures of the mangroves.
It is the host of the Cotton Stainer Bug (Dysdercus decussatus and the plant was eradicated in many cotton-growing areas to eliminate this insect.
(Peter K L Ng and N Sivasothi. 1999. A Guide to the Mangroves of Singapore : The Ecosystem and Plant Diversity.)

The Tahitians considered the milo tree sacred and grew it near places of worship. The name "Thespesia" means "divinely decreed" and was given by Daniel Solander who saw the tree in Tahiti while he was a member of Captain Cook's ship's crew.
A member of the Hibiscus family, the malvacceae, it is a close relative of hau, 'ilima, and ma'o, Hawai'i cotton.
(Morley, B.D. 1970. Wild Flowers of the World.)

We currently have 47 herbarium specimens for Thespesia populnea in our collection. Click on any specimen below to view the herbarium sheet data.