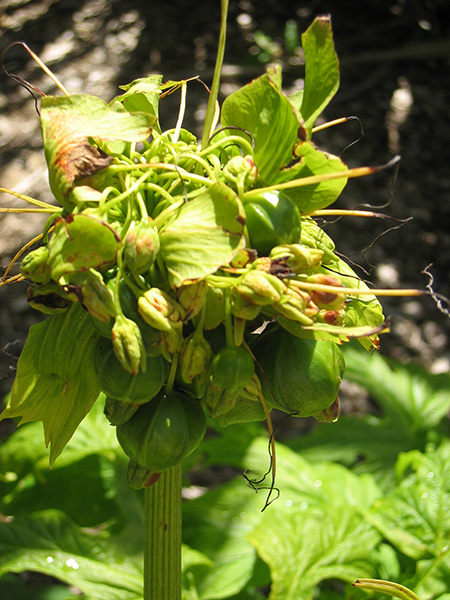 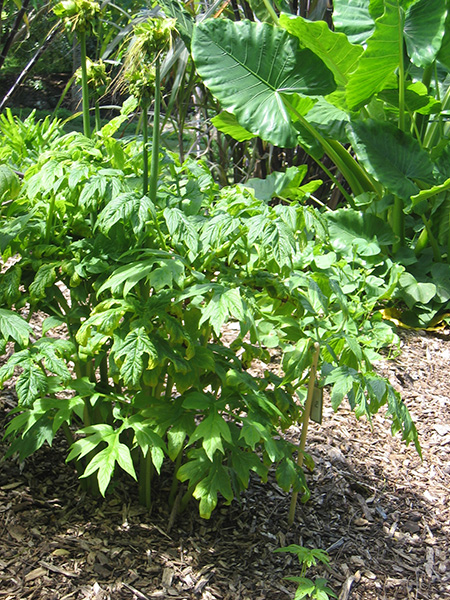 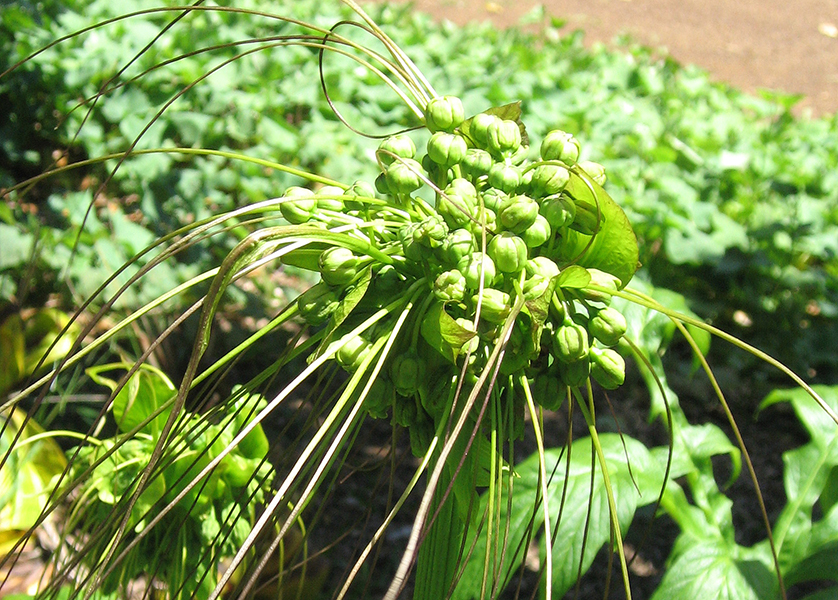 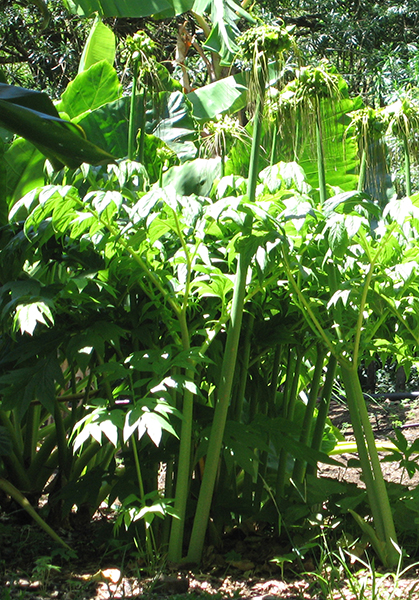 One to several pia leaves arise from the center of the plant on petioles (leaf stalks) 17 to 150 cm long. Leaves are large and deeply divided, 30 to 70 cm long and up to 120 cm in width. The leaf upper surface has depressed veins, and the under surface is shiny with bold yellow veins. Flowers are borne on tall stalks in greenish-purple clusters, with long trailing bracts. The plant is usually dormant for part of the year and dies down to the ground. Later, new leaves will arise from the round underground tuber. The tubers are hard and potato-like, with a brown skin and white interior.
(Wagner,W. L., D. R. Herbst, and S. H. Sohmer. 1990. Manual of the Flowering Plants of Hawai`i)
In traditional Hawaiian medicine the raw tuber was mixed with water and red clay and consumed to treat diarrhea and dysentery. This combination was also used to stop internal hemorrhaging in the stomach and colon and aplied to wounds to stop bleeding.
(Krauss, Beatrice H. 1979. Native Plants Used As Medicine in Hawaii)

The tubers of Polynesian arrowroot contain starch that was an important food source for many Pacific Island cultures, primarily for the inhabitants of low islands and atolls. The tubers were also eaten to treat stomache ailments. The starch was additionally used to stiffen fabrics and on some islands, and the stems fibers were woven into mats.

(Whistler W. A. 1992. Flowers of the Pacific Island Seashore)
Tacca leontopetaloides is naturally distributed from western Africa through southeast Asia to northern Australia. It was intentionally brought to tropical Pacific Islands with early human migrations.

Polynesian arrowroot was prepared into a flour to make a variety of puddings. The tubers were first grated and then allowed to soak in fresh water. The settled starch was rinsed repeatedly to remove the bitterness and then dried. The flour was mixed with mashed taro, breadfruit or Pandanus fruit extract and mixed with coconut cream to prepare puddings. In Hawai`i, a local favorite is "haupia", which was originally made with pia flour, coconut cream and sugar (Ko). Today, Polynesian arrowroot has been largely replaced by corn starch.

We currently have 26 herbarium specimens for Tacca leontopetaloides in our collection. Click on any specimen below to view the herbarium sheet data.