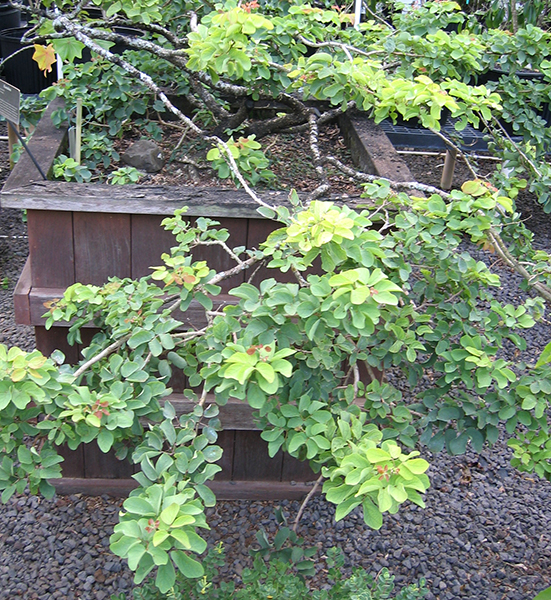 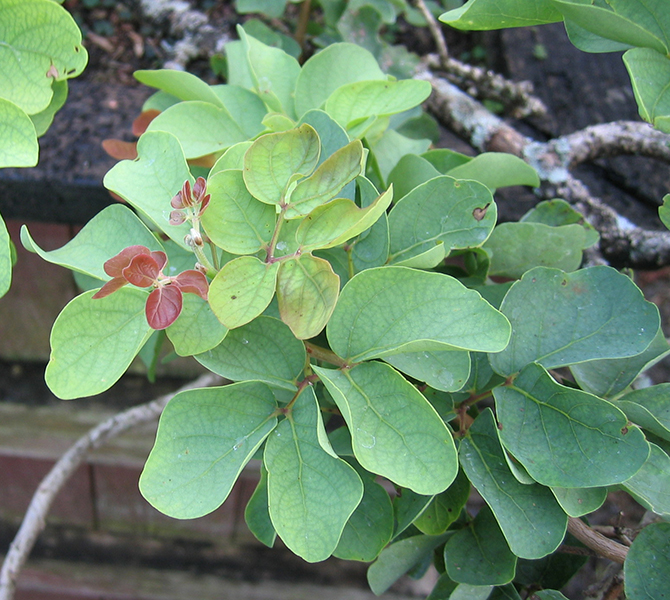 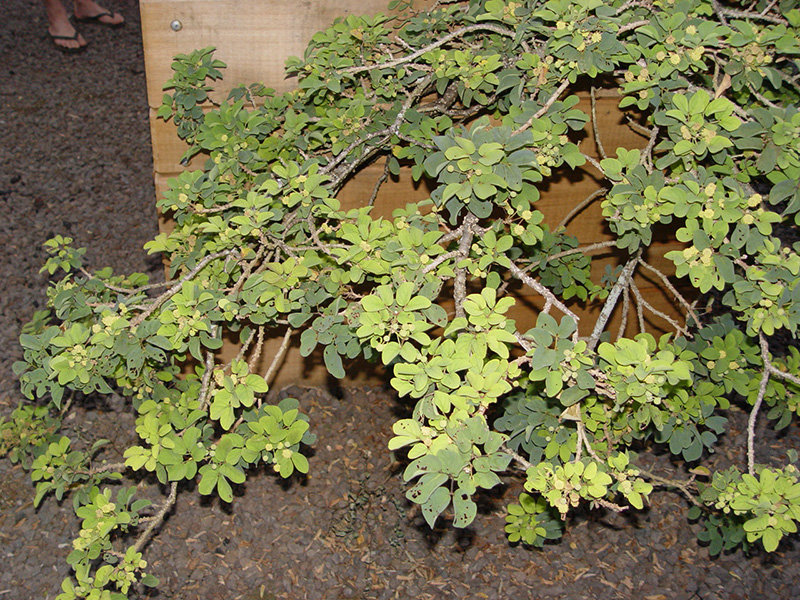 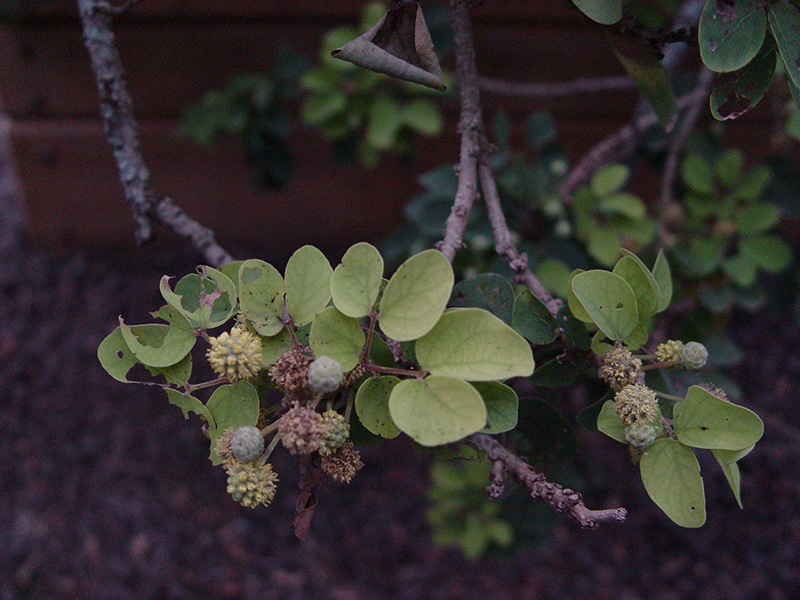 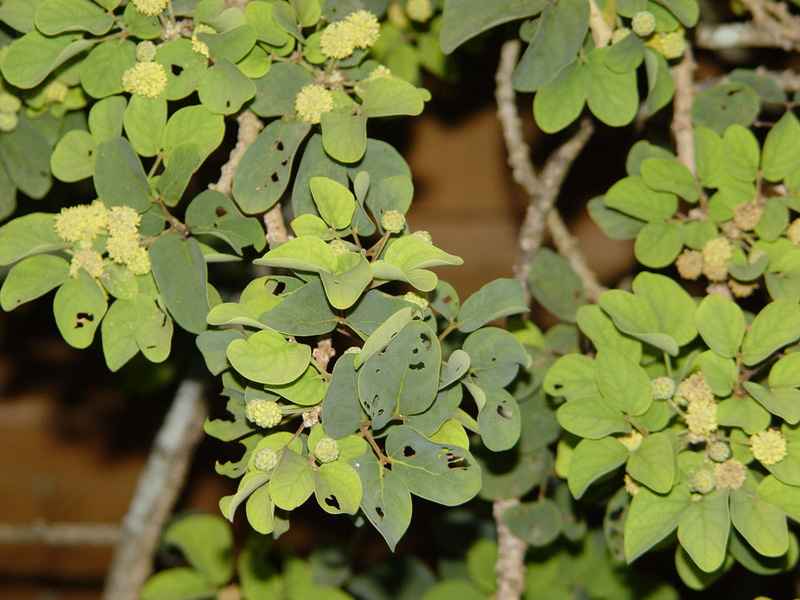 
Kanaloa kahoolawensis is a densely branched shrub that grows from 0.75-1m tall with the leaves clustered at the end of the branches. The compound leaves of this species are very distinctive with the leaf divided into six leaflets each of which are 1.4-4.3 cm long and 0.9-3.2 cm wide. The leaflets are papery and asymmetrical being larger on one side of the midvein than on the other. A nectary (nectar producing structure) is present in the joint between each pair of leaflets. Flowers are produced at the same time as the new leaves and are born in globose inflorescences containing 20-54 flowers per clusters. The flowers are white, and very small with male and female flowers borne in separate inflorescences.
(Lorence, D.H., and K.R. Wood. 1994. Kanaloa, a new genus of Fabaceae (Mimosoideae) from Hawaii. Novon 4:137-145.)
(Wagner, W. L., 2005. Kanaloa kahoolawensis.)

The recovery plan for this species includes efforts to protect known individuals and establish additional populations. Currently individuals are fenced to protect from grazing and trampling from introduced mammals and plants are monitored regularly for insect damage and disease. Efforts include surveying and monitoring the historical range of Ka palupalu o Kanaloa for surviving populations, establishing ex-situ stocks (in a nursery or arboretum), and establishing new populations. The goal of these conservation efforts is to establish three Ka palupalu o Kanaloa populations within the historic range of this species that are naturally reproducing and increasing in number with a minimum of 25 individuals. Additionally this species plants representing in both natural and ex situ (nursery or arboretum) collections.
Ka palupalu o Kanaloa was first described in 1994 from a plant discovered on the cliffs of Ale`ale Pu`uloae on sea stacks off the coast of Kaho`olawe Island. This is the only shrub that exists in the wild and is found on steep, rocky talus slopes in mixed coastal scrubland between 0-305m in elevation. No other plant individuals are known in the wild or documented in historical manuscripts to reconstruct the past distribution of this species. Study of pollen records has identified pollen grains that are closest in their features to Ka palupalu o Kanaloa pollen. Pollen records suggest that this species may have had a much larger historical distribution including the islands of O’ahu, Maui, and Kaua`i. The plant species represented in the pollen record was a dominant vegetation species with A`ali`i (Dodonea viscosa; Sapindaceae) and Loulu (Pritchardia species: Arecaceae) between 1210 B. C. and 1565 A. D. when it decreased in abundance in the pollen records.
(Lorence, D.H., and K.R. Wood. 1994. Kanaloa, a new genus of Fabaceae (Mimosoideae) from Hawaii. Novon 4:137-145.)
(Wagner, W. L., 2005. Kanaloa kahoolawensis.)

The common name for Kanaloa kahoolawensis is Ka palupalu o Kanaloa (the gentleness of Kanaloa) was assigned by the late Parley Kanakaole. Kanaloa is one of the major Hawaiian male gods and is the god of the ocean (and all related aspects including navigation), ocean animals, and fresh water found underground. The island of Kaho'olawe is the sacred form and refuge of the life force and energy of Kanaloa and they are therefore considered to be one and the same.
The researchers D.H. Lorence and K.R. Wood published the official description of this genus and species in 1994, declaring it unusual enough not just to be designated as a new species but to be considered a new genus in the pea family. The genus therefore contains just one single species which is known only from Kaho`olawe in Hawai`i. The name of the genus was assigned by plant taxonomist David Lorence from the National Tropical Botanical Garden in honor of the Hawaiian deity Kanaloa. The second part of the species name (the specific epithet) comes from the Hawaiian island Kaho'olawe where the species was first discovered.

Kanaloa kahoolawensis is a critically endangered species recognized under the US Endangered Species Act. The only remaining plant in the wild is found on the cliffs of Ale`ale Pu`uloae on a sea-stack off the coast of Kaho`olawe, Hawai`i. Another plant that was grown from seed can be found in the National Tropical Botanical Garden's McBryde Garden on Kaua`i, Hawaii. On the island of Kaho'olawe goats (Capra hircus; Bovidae) and other grazing animals were introduced by Europeans and the U.S. Army and Navy used the island for target practice between 1941 and 1990 both of which resulted in significant change and almost total decimation of native vegetation. Current threats to these individuals include competition from introduced plant species, loss of individual plants due to natural disturbance, and reduced reproductive capacity due to the small number of remaining individuals.

Ongoing research is required to determine the species that serve as pollinators for this species, resolve problems with the breeding system, and elucidate the requirements for seed dispersal and germination. Analysis of the genetic diversity of the two remaining plants is necessary to maintain maximum genetic diversity and guide efforts for establishing new populations.
(US Fish and Wildlife Service. 1999. Final Listing, Endangered ETWP; Final Endangered Status for 10 Plant Taxa From Maui Nui, HI, State of Hawaii, Vol. 64, No. 171 64 FR 48307-48324)
(Wagner, W. L., 2005. Kanaloa kahoolawensis.)

We currently have 24 herbarium specimens for Kanaloa kahoolawensis in our collection. Click on any specimen below to view the herbarium sheet data.