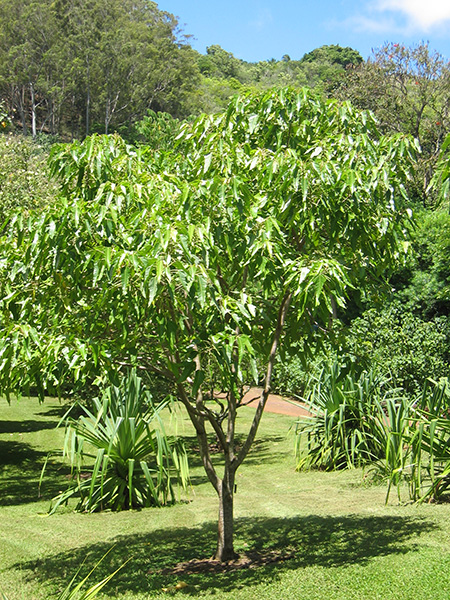 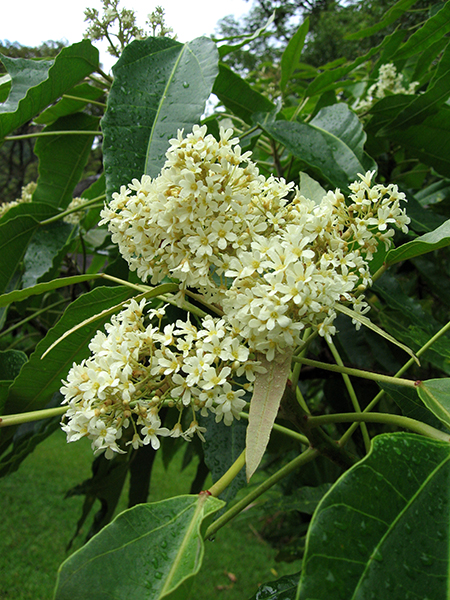 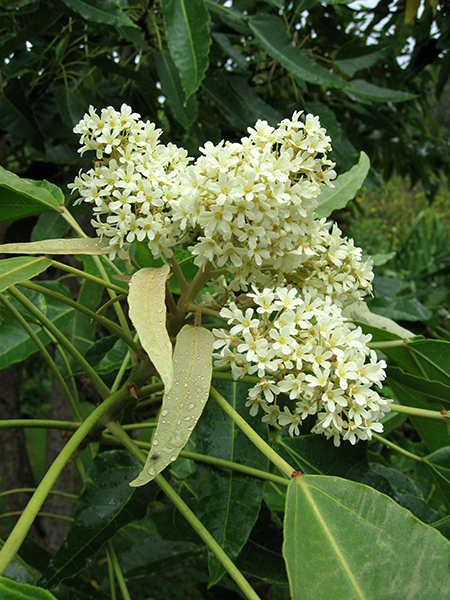 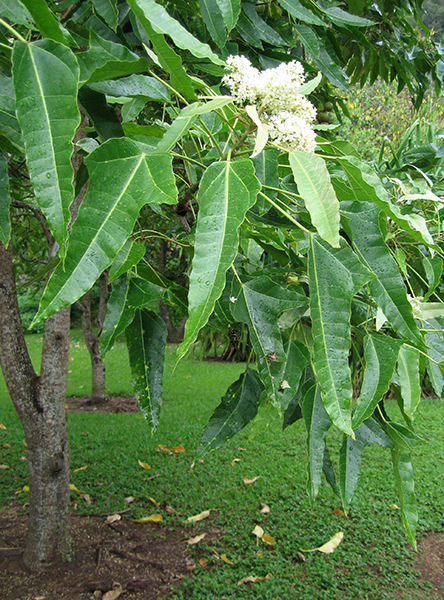 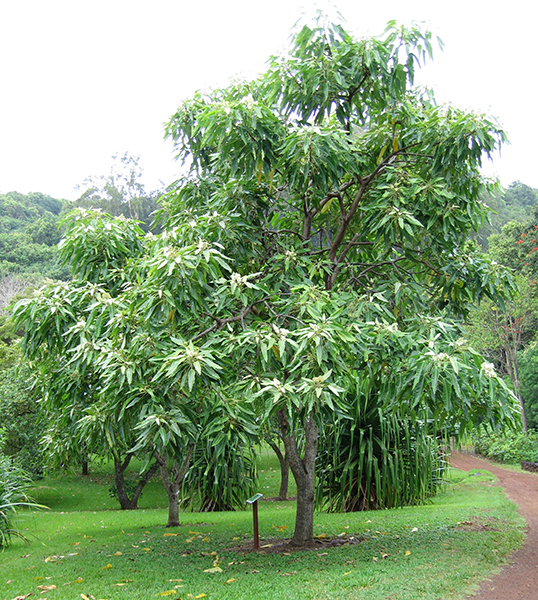 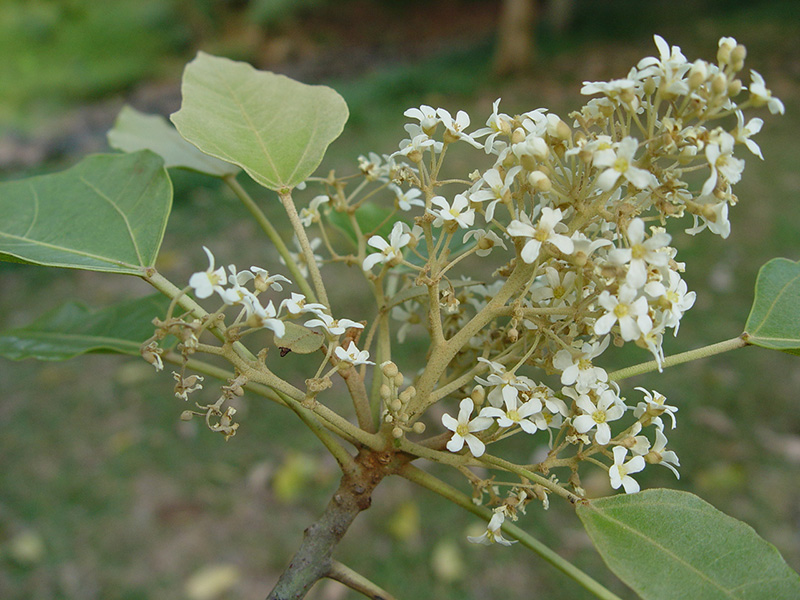 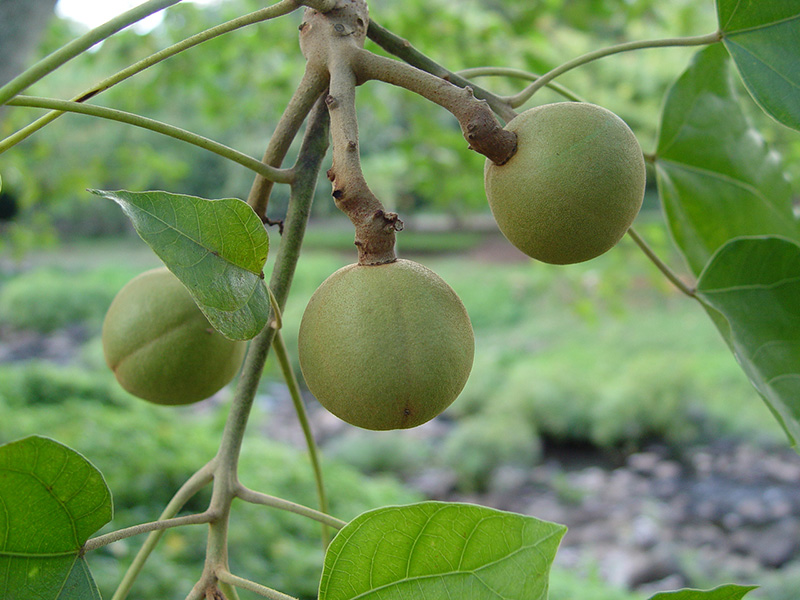 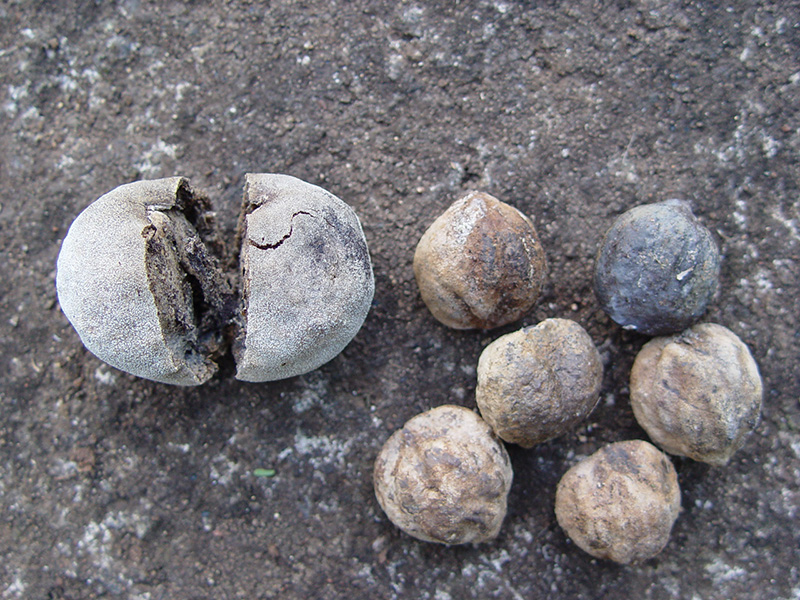 Kukui is a tree 10 m tall or more with bark gray-brown to blackish. Leaves and inflorescence have a mealy-scurfy whitish to light brown indument. The leaves are simple and ovate or trilobed or rarely 5-lobed. Blades mostly 10-20 cm long, on an equally long slender petiole with 2 glands at junction of blade and petiole. The flowers are small, greenish-white, in panicles, with male and female flowers on same plant. The fruit is globose or bi-globose, with 1-2 large, heavy seeds. Kukui tree ears two heavy crops each year. (Stone, B. 1970. The flora of Guam. Micronesica.)

The bark, flowers and nuts are all used for medicine. The small, five-petaled white flowers were chewed by the parents of a young child and given to the child to aid in healing of e'a (thrush) sores inside the mouth and upon the tongue. Also used for this problem was the juicy sap that fills up the depression left when the stem is pulled off the green fruit. This is applied with the finger and rubbed inside of the child's mouth and on the tongue. The green fruit is the part of the plant that contains the nut. This sap is also a healing application for chapped lips, cold sores and mild sunburn. One mashed nut (sometimes the raw kernel, sometimes the roasted) or the sap of the green nut was often used in combination with other traditional Hawai'i medicinal plants, particularly when a purgative for constipation was needed. The potency of this plant is so strong that these internal remedies are administered very carefully by those with experience in these matters.
The late Uncle Harry Mitchell of Keanae recommended the use of Kukui nut for high blood pressure. He suggested one teaspoon a day of the ground roasted kernel. Sometimes this is mixed with pressed garlic juice. For bad cases of ulcers and other skin sores, the baked meat of ripe Kukui nuts was pounded and mixed with other plants, such as ripe noni fruit. In the treatment of rheumatic joints or deep bruises and wounds, Kukui and Noni leaves were wrapped around the afflicted places and heat applied by hot packs of salt, sand or rocks wrapped in tapa cloth.
(Krauss, B. H. 1993. Plants in Hawaiian Culture.)
(Kepler, A. K. 1998. Hawaiian Heritage Plants.)

In Japan, the bark of Kukui tree is used on tumors. The oil is purgative and sometimes used like castor oil. Kernels are laxative stimulant, and sudorific. The irritant oil is rubbed on scalp as a hair stimulant.
In Sumatra, pounded seeds, burned with charcoal,are applied around the navel forcositiveness.
In Malaya, the pulped kernel enters poultices for headache, fevers, ulcers, and swollen joints.
In Java, the bark is used for bloody diarrhea or dysentery. Bark juice with coconut milk is used for sprue.
Malayans apply boiled leaves to the temples for headache and to the pubes for gonnorhea.
(Duke, J.A. 1978. The quest for tolerant germplasm.)
(Duke, J.A. 1979. Ecosystematic data on economic plants.)

The Kukui nut has many uses. Originally it was most valued for its light, the oil of the white kernels being extracted for its use in stone lamps and in ti leaf sheath torches. The shelled nuts were skewered on a coconut frond mid-rib and lit one by one, from the top to bottom, as they sat in a container of sand or dirt, or in the earth itself. Often children were given the responsibility for keeping the "candles" lit. The nuts are widely used as a traditional lei, both the hard shells of the polished black, tan or brown, and immature white, which are more rare. The white flowers and downy, angularly pointed leaves are also strung as lei, representing Moloka'i, whose symbolic color is silvery green.
The inner bark provided a red-brown dye for tapa cloth and 'olona cordage, while the gum from the bark strengthened the tapa. The soot (pau) of burned nuts provided a black dye for tattooing and for painting designs on canoes and on tapa cloth.
The soft light-colored wood of the tree trunk was fashioned into canoes. The oil provided a varnish similar to linseed oil.
Roasted kernels, pulverized by fishermen while on the reef or in canoes, were strewn upon the ocean surface where there were small ripples and waves. The film increased underwater visibility by creating a lens on the water's surface. Fishing nets were preserved by a coating of Kukui oil
(Krauss, B. H. 1993. Plants in Hawaiian Culture.)
(Kepler, A. K. 1998. Hawaiian Heritage Plants.)

This species is native to Malaysia and western Polynesia. The seeds of Kukui were brought to Hawai'i by the first Polynesian voyagers. Today this tree commonly grows wild in the lower mountain forest areas in Hawaii and in the warmer protected areas of South Florida. It is planted in gardens as a shade tree, although it is a bit messy due to dropping its leaves and nuts, up to 100 pounds per tree.
(Kepler, A. K. 1998. Hawaiian Heritage Plants.)

As food, a small amount of the pounded roasted nuts, plus salt and sometimes chili peppers, is used as a relish and is called 'Inamona.
(Krauss, B. H. 1993. Plants in Hawaiian Culture.)

The Kukui tree is a symbol of enlightenment, protection and peace. Kukui was considered to be the body form of Kamapua'a, the pig god. On the altar of Lono was placed a wooden carving shaped like a pig's head.
The Kukui tree is a classic example of the wisdom of ancient voyaging Polynesians. The plants that they chose to bring on their canoes had to serve many useful purposes. The Kukui is such a plant.

We currently have 37 herbarium specimens for Aleurites moluccana in our collection. Click on any specimen below to view the herbarium sheet data.