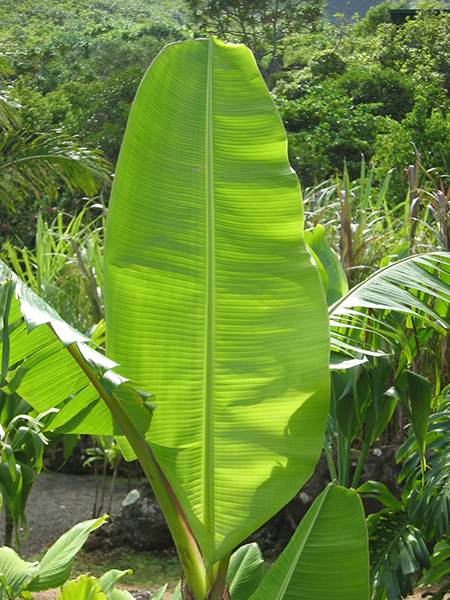 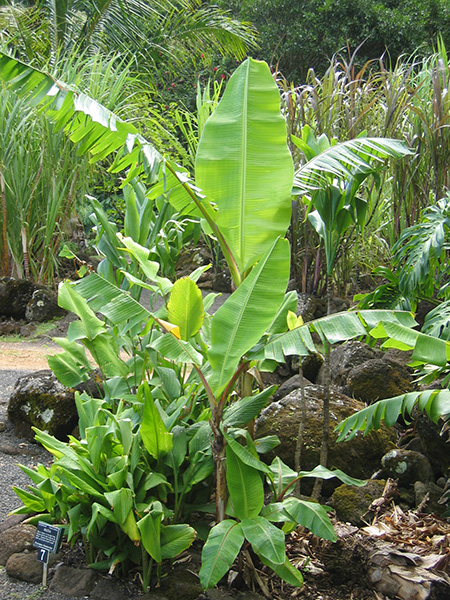 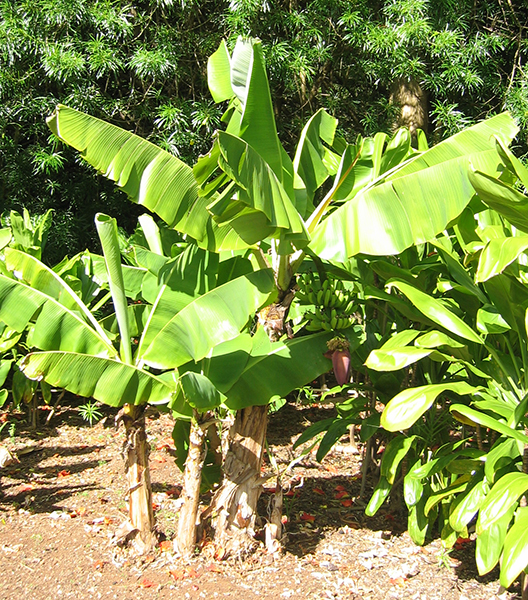 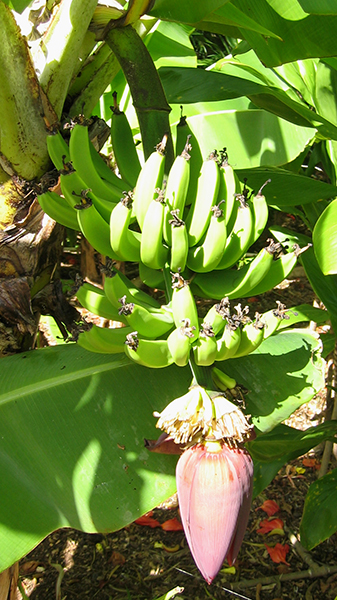 The Banana plant, often erroneously referred to as a "tree", is a large herb, with succulent, very juicy stem, which is a cylinder of leaf-petiole sheaths, reaching a height of 20 to 25 ft (6-7.5 m) and arising from a fleshy rhizome or corm. Suckers spring up around the main plant forming a clump or "stool'', the eldest sucker replacing the main plant when it fruits and dies, and this process of succession continues indefinitely. Tender, smooth, oblong or elliptic, fleshy-stalked leaves, numbering 4 or 5 to 15, are arranged spirally and they unfurl, as the plant grows, at the rate of one per week in warm weather, and extend upward and outward, becoming as much as 9 ft (2.75 m) long and 2 ft (60 cm) wide. They may be entirely green, green with maroon splotches, or green on the upperside and red purple beneath. The inflorescence, a transformed growing point, is a terminal spike shooting out from the heart in the tip of the stem. At first, it is a large, long-oval, tapering, purple-clad bud. As it opens, it is seen that the slim, nectar-rich, tubular, toothed, white flowers are clustered in whorled double rows along the floral stalk, each cluster covered by a thick, waxy, hoodlike bract, purple outside, deep-red within. Normally, the bract will lift from the first hand in 3 to 10 days. If the plant is weak, opening may not occur until 10 or 15 days. Female flowers occupy the lower 5 to 15 rows. Above them may be some rows of hermaphrodite or neuter flowers. Male flowers are borne in the upper rows. In some types the inflorescence remains erect but generally, shortly after opening, it begins to bend downward. In about one day after the opening of the flower clusters, the male flowers and their bracts are shed, leaving most of the upper stalk naked except at the very tip where there usually remains an unopened bud containing the last-formed of the male flowers. As the young fruits develop from the female flowers, they look like slender green fingers. The bracts are soon shed and the fully grown fruits in each cluster become a "hand" of Bananas, and the stalk droops with the weight until the bunch is upside down. The number of "hands" varies with the species and variety. The fruit turns from deep-green to yellow or red, or, in some forms, green-and white-striped, and may range from 2 1/2 to 12 in (6.4-30 cm) in length and 3/4 to 2 in (1.9-5 cm) in width, and from oblong, cylindrical and blunt to pronouncedly 3-angled, somewhat curved and hornlike. The flesh, ivory-white to yellow or salmon-yellow, may be firm, astringent, even gummy with latex, when unripe, turning tender and slippery, or soft and mellow or rather dry and mealy or starchy when ripe. The flavor may be mild and sweet or subacid with a distinct apple tone.
(Morton, J. 1987. Fruits of Warm Climates.)
All parts of the Banana plant have medicinal applications. The flowers are used in bronchitis and dysentery and on ulcers. Cooked flowers are given to diabetics. The astringent plant sap is given in cases of hysteria, epilepsy, leprosy, fevers, hemorrhages, acute dysentery and diarrhea, and it is applied on hemorrhoids, insect and other stings and bites. Young leaves are placed as poultices on burns and other skin afflictions. The astringent ashes of the unripe peel and of the leaves are taken in dysentery and diarrhea and used for treating malignant ulcers. The roots are administered in digestive disorders, dysentery and other ailments. Banana seed mucilage is given in cases of catarrh and diarrhea in India.

Antifungal and antibiotic principles are found in the peel and pulp of fully ripe Bananas. The antibiotic acts against Mycobacteria. A fungicide in the peel and pulp of green fruits is active against a fungus disease of tomato plants. Norepinephrine, dopamine, and serotonin are also present in the ripe peel and pulp. The first two elevate blood pressure. Serotonin inhibits gastric secretion and stimulates the smooth muscle of the intestines.
Alleged hallucinogenic effects of the smoke of burning banana peel have been investigated scientifically and have not been confirmed.
(Morton, J. 1987. Fruits of Warm Climates.)

Banana leaves are widely used as plates and for lining cooking pits and for wrapping food for cooking or storage. A section of leaf often serves as an eye-shade. In Latin America, it is a common practice during rains to hold a Banana leaf by the petiole, upside-down, over one's back as an "umbrella" or "raincoat". The leaves of the "Fehi" Banana are used for thatching, packing, and cigarette wrappers. The pseudostems have been fastened together as rafts.
Seat pads for benches are made of strips of dried banana pseudostems in Ecuador. In West Africa, fiber from the pseudostem is valued for fishing lines. In the Philippines, it is woven into a thin, transparent fabric called "agna" which is the principal material in some regions for women's blouses and men's shirts. It is also used for making handkerchiefs. In Ceylon, it is fashioned into soles for inexpensive shoes and used for floor coverings.
Plantain fiber is said to be superior to that from Bananas. In the mid-19th Century, there was quite an active Banana fiber industry in Jamaica. Improved processes have made it possible to utilize Banana fiber for many purposes such as rope, table mats and handbags. In Kerala, India, a kraft type paper of good strength has been made from crushed, washed and dried Banana pseudostems which yield 48 to 51% of unbleached pulp. A good quality paper is made by combining Banana fiber with that of the Betel nut husk (Areca catechu).
Dried Banana peel, because of its 30 to 40% tannin content, is used to blacken leather. The ash from the dried peel of Bananas and Plantains is rich in potash and used for making soap. That of the burned peel of unripe fruits of certain varieties is used for dyeing.
In the Philippines, the cut off a Banana plant close to the ground, make a hollow in the top of the stump, which then fills with watery sap drunk as an emergency thirst quencher. Central Americans obtain the sap of the red Banana in the same manner and take it as an aphrodisiac.
In Polynesia, there is a traditional method of preserving large quantities of Bananas for years as emergency fare in case of famine. A pit is dug in the ground and lined with Banana and Heliconza leaves. The peeled Bananas are wrapped in Heliconza leaves, arranged in layer after layer, then Banana leaves are placed on top and soil and rocks heaped over all. The pits remain unopened until the fermented food, called "masi", is needed
(Morton, J. 1987. Fruits of Warm Climates.)

Edible Bananas originated in the Indo-Malaysian region reaching to northern Australia. They were known in the Mediterranean region in the 3rd Century B.C. and are believed to have been first carried to Europe in the 10th Century A.D. Early in the 16th Century, Portuguese mariners transported the plant from the West African coast to South America. The types found in cultivation in the Pacific have been traced to eastern Indonesia from where they spread to the Marquesas and by stages to Hawaii.

Bananas and Plantains are today grown in every humid tropical region and constitute the 4th largest fruit crop of the world, following the grape, citrus fruits and the apple.
(Morton, J. 1987. Fruits of Warm Climates.)

The ripe Banana is utilized in a multitude of ways in the human diet, from simply being peeled and eaten out of-hand to being sliced and served in fruit cups and salads, sandwiches, custards and gelatins or being mashed and incorporated into ice cream, bread, muffins, and cream pies. Ripe Bananas are often sliced lengthwise, baked or broiled, and served (perhaps with a garnish of brown sugar or chopped peanuts) as an accompaniment for ham or other meats. Ripe Bananas may be thinly sliced and cooked with lemon juice and sugar to make jam or sauce, stirring frequently during 20 or 30 minutes until the mixture jells. Whole, peeled Bananas can be spiced by adding them to a mixture of vinegar, sugar, cloves and cinnamon which has boiled long enough to become thick, and then letting them cook for 2 minutes.
In the islands of the South Pacific, unpeeled or peeled, unripe Bananas are baked whole on hot stones, or the peeled fruit may be grated or sliced, wrapped, with or without the addition of coconut cream, in Banana leaves, and baked in ovens. Ripe Bananas are mashed, mixed with coconut cream, scented with Citrus leaves, and served as a thick, fragrant beverage.
Green Bananas, boiled in the skin, are very popular in Cuba, Puerto Rico and other Caribbean islands. In Puerto Rico, the cooked Bananas are recooked briefly in a marinating sauce containing black pepper, vinegar, garlic, onions, bay leaves, olive oil and salt and left standing at room temperature for 24 hours before being eaten. Peeled, sliced green Bananas are quick-frozen in Puerto Rico for later cooking.
In Africa, ripe Bananas are made into beer and wine. The Tropical Products Institute in London has established a simple procedure for preparing an acceptable vinegar from fermented Banana rejects.
The new shoots of young plants may be cooked as greens. In India, there is no distinction between bananas and plantains. All cultivars are merely rated as to whether they are best for dessert or for cooking. A solution of the ash from burned leaves and pseudostems is used as salt in seasoning vegetable curries.
Reject ripe Bananas, supplemented with protein, vitamins and minerals, are commonly fed to swine. Beef cattle are very fond of green Bananas whether they are whole, chopped or sliced.
(Morton, J. 1987. Fruits of Warm Climates.)

The Banana plant because of its continuous reproduction is regarded by Hindus as a symbol of fertility and prosperity, and the leaves and fruits are deposited on doorsteps of houses where marriages are taking place. A Banana plant is often installed in the corner of a rice field as a protective charm. Malay women bathe with a concoction of Banana leaves for 15 days after childbirth. Early Hawaiians used a young plant as a truce flag in wars.
(Morton, J. 1987. Fruits of Warm Climates.)

We currently have 13 herbarium specimens for Musa ×paradisiaca in our collection. Click on any specimen below to view the herbarium sheet data.