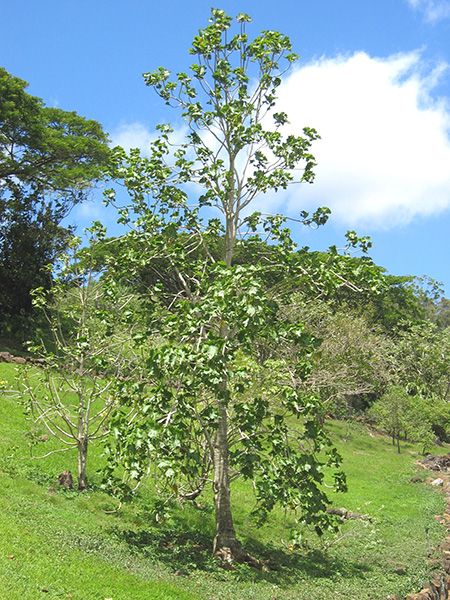 Kokia drynarioides is a tree that grows up to 8m tall with an open crown. The leaves can be from 8-20 cm long and have 7-9 lobes with a cordate (heart shaped) leaf base. The leaf veins are often distinctly red and sometimes have nectar producing structures on the major veins. Kokia flowers are borne individually in the leaf axils at the end of the branches. They are large with showy scarlet petals that are 9-11 cm long Three large, united bracts (4-7 cm long) are present beneath each flower and these continue to enlarge as the flower and then the fruit develops. The surface of the calyx is covered with dense, short yellow hairs. The flowers are similar to Hibiscus flower in that the stalks that support the anthers (pollen producing structures) fuse to form a column that can be up to 11 cm. By extending the anthers out from the flower the pollen is exposed to pollinators to ensure the transfer of pollen for fertilization of a different flower therefore ensuring seed production. The fruit is a 5-lobed dry capsule (3 cm in length) and contains up to five seeds. The seeds are 12-15 mm long, 8 mm wide and are covered with short hairs.

(Wagner, W. L., Herbst, D. R., and S. H. Sohmer. 1999. Manual of the Flowering Plants of Hawai`i. Revised Edition. Volume 1. Bishop Museum Special Publication 97. University of Hawai`i Press, Bishop Museum Press, Honolulu, Hawai`i.)
Kokia drynarioides is part of tropical dry forest vegetation which is found on the leeward side of each of the major Hawaiian islands in dry areas that receive only 500-2,000 mm of rain annually. Intact tropical dry forests contain a rich diversity of native plants but are now restricted to small forest fragments as a result of land-use competition and the impact of introduced non-native plants and animals.

Recognized threats for Kokia drynarioides include:
1. Cattle browsing and trampling
2. Rodent seed predation
3. Competition with invading exotic species, especially fountaingrass (Pennisetum setaceum), which has contributed to an increase in the frequency and intesity of wildfires in the region
4. Possible hybridization with other species in the Kokia genus under cultivation
5. Volcanic eruption
6. Drought
7. Rock slides

Research Management Needs:
1. Acquire management rights for lands essential to the continued existence of the species
2. Terminate grazing leases on this land and remove livestock from the land
3. Fence the area to protect the trees from neighboring domestic and feral animals
4. Initiate and maintain controls for the insects and rodents that eat the seeds
5. Remove fountaingrass
6. Population monitoring


The sap of this incredibly rare tree was used by native Hawaiians to make red dyes for fishnets.

Kokia drynarioides is an endemic Hawaiian species that is only found in North Kona on the Big Island of Hawaii. It is found in dry forests found on rough lava with a thin, highly drained soil layer at elevations between 46 and 900 m.

Kokia drynarioides has been instrumental in the recovery plan for the closely related Molokai endemic species Kokia cookei. Kokia cookei is no longer found in the wild but propogation has produced 28 cloned individuals some of which have been grafted onto Kokia drynarioides root stock. This has enabled outplanting of these individuals as part of the recovery plans for this species.
Kokia drynarioides is currently listed as an endangered species. Currently only 5 trees are known in the wild in North Kona region on the Big Island of Hawaii. Numerous cultivated plants exist as a result of distribution of the seeds to arboretum and botanic gardens.

We currently have 8 herbarium specimens for Kokia drynarioides in our collection. Click on any specimen below to view the herbarium sheet data.