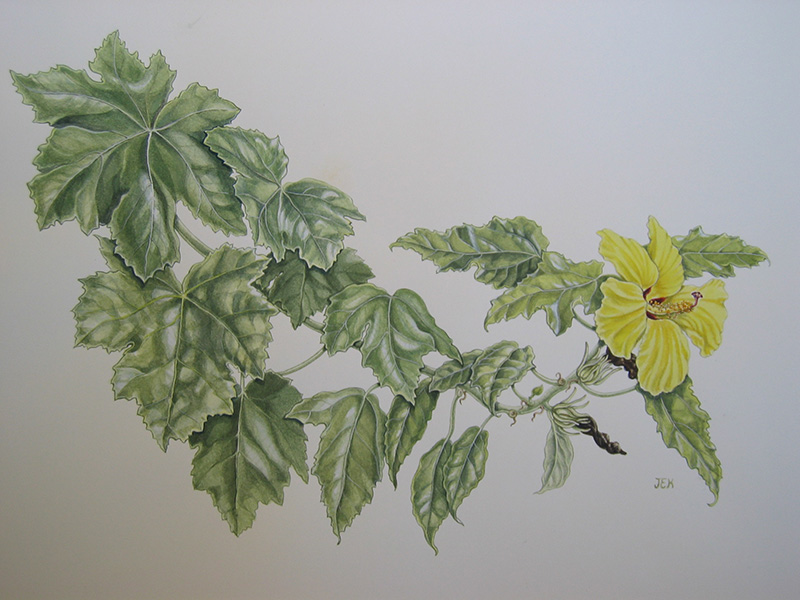 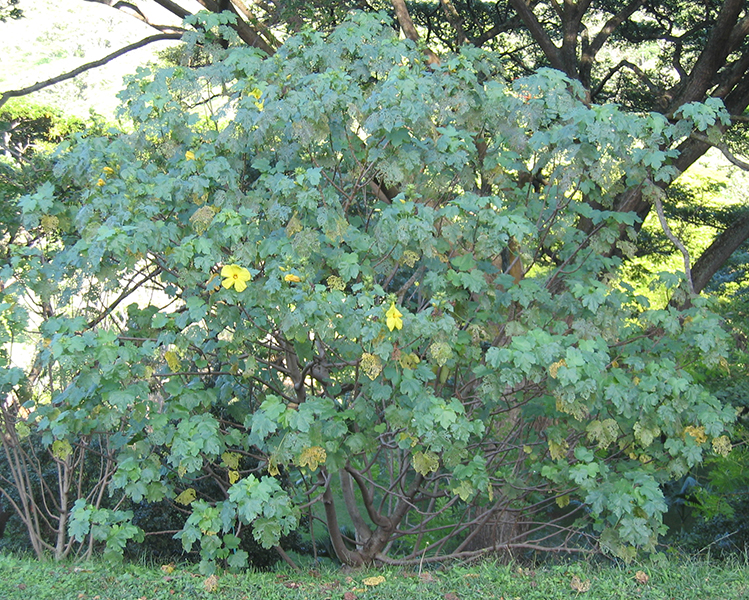 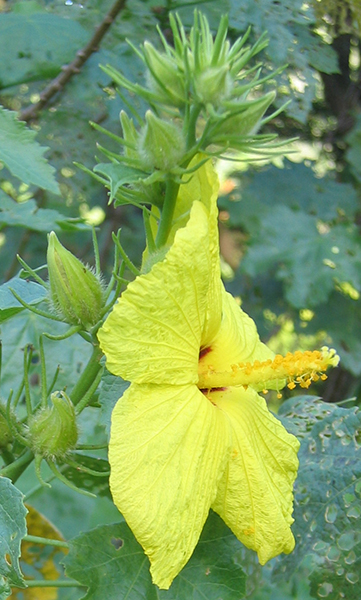 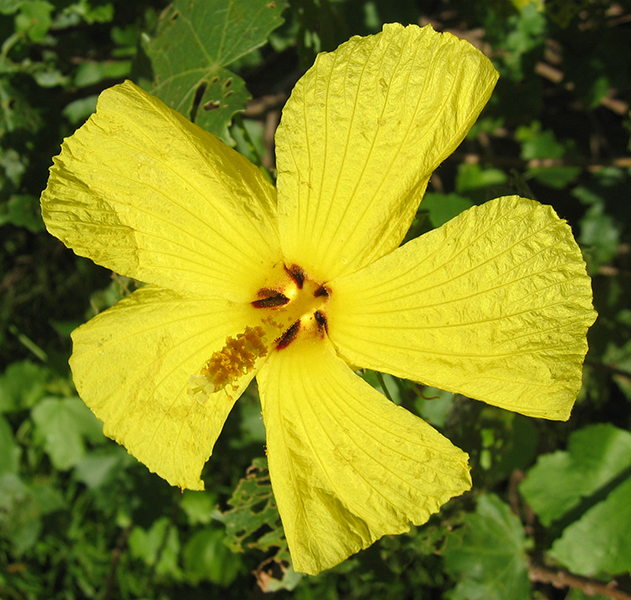 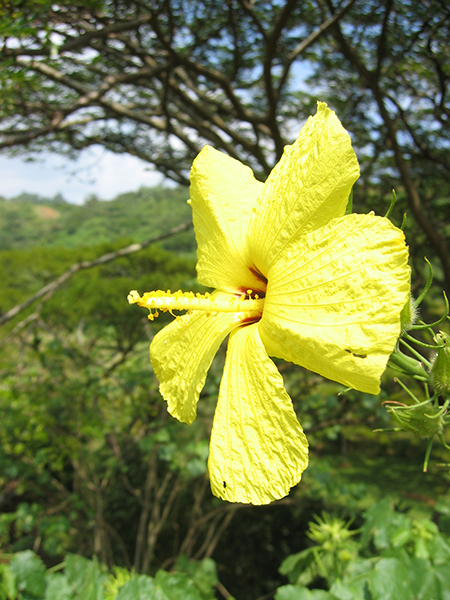 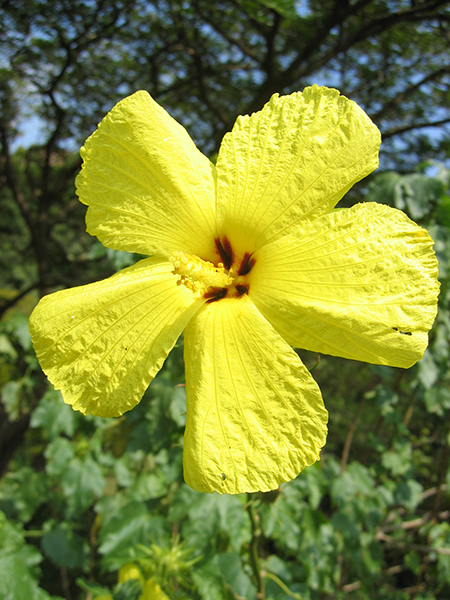 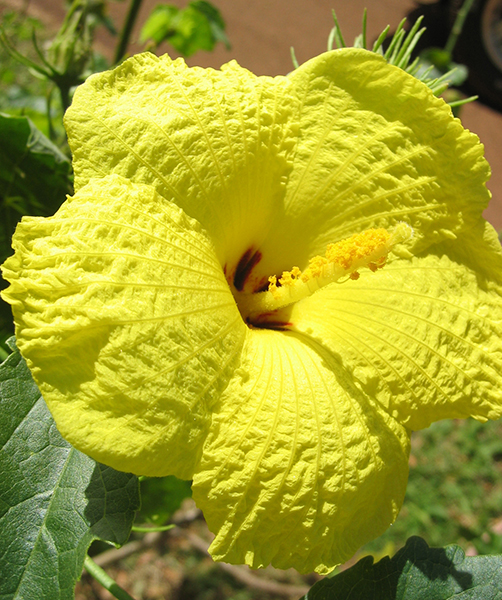 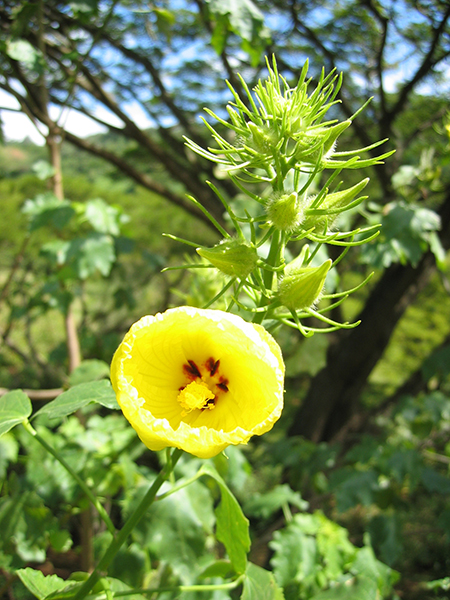 Hibiscus brackenridgei is Hawai'i's State flower. Hibiscus brackenridgei can sometimes become a small tree growing up to 10 meters tall. In the garden it is often grows to be a 1 to 3 meter tall shrub. Young plants have smooth tan trunks; the trunks of older plants have a wrinkled appearance. The fuzzy leaves have toothed edges, 3, 5, or 7 lobes, and are up to 6 inches long and equally wide.
The large flowers are 4 to 6 inches in diameter. They are yellow, generally with a maroon center, and form singly or in small clusters at the ends of the branches. The staminal column is yellow. Garnett reports that the flowers open between 2 and 4 p.m. and close between 9 a.m. and 1 p.m. Spring through early summer is the main blooming season with occasional flowers during the rest of the year. Garnett reports a flowering season of January through March for the subspecies found on O'ahu. The seeds of Hibiscus brackenridgei are contained in 3/8 to 3/4 inch oval capsules. The capsule is covered with soft hairs. It is dry and tan when mature and opens to release the seeds. The seeds are 1/8 inch long, kidney-shaped, and covered with fine hairs.
(Wagner,W.L.,Herbst,D.R.,Sohmer,S.H. 1990. Manual of Flowering Plants of Hawai'i.)
(Bornhorst.1996; Criley 1998.1999;Garnett.1988;Koob.1999)

Current Management Summary:
1. Fenced exclosure of outplanting at Puuwaawaa/Kaupulehu area.
2. Fenced exclosure of Kaunohua Gulch, Maui population.
3. In April, 2002, the U.S. Fish and Wildlife Service determined that a designation of critical habitat was prudent for this species.
(USFWS.2002)

Hibiscus brackenridgei is native to dry forests and shrub lands at elevations from 400 to 2,600 feet. It is found on all the main Hawaiian islands except Ni'ihau and Kaho'olawe, but it is not common in any location
(Wagner,W.L.,Herbst,D.R.,Sohmer,S.H. 1990. Manual of Flowering Plants of Hawai'i.)

Little is known about the life history of this plant. Pollination biology, longevity, specific environmental requirements and limiting factors are unknown.(USFWS.1999)

Hau blossoms, ancient symbols of the human soul, are ephemeral. Unfurling yellow in the morning, turning orange in the afternoon, and withering to a dark pinkish orange by nightfall, they flowers are replaced daily.
(Kepler,A.K.1983. Hawaiian Heritage Plants.)