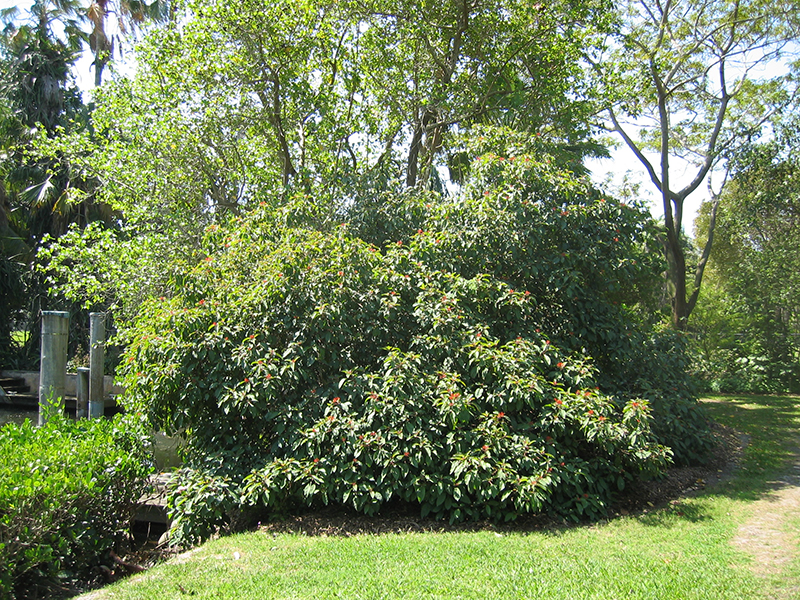 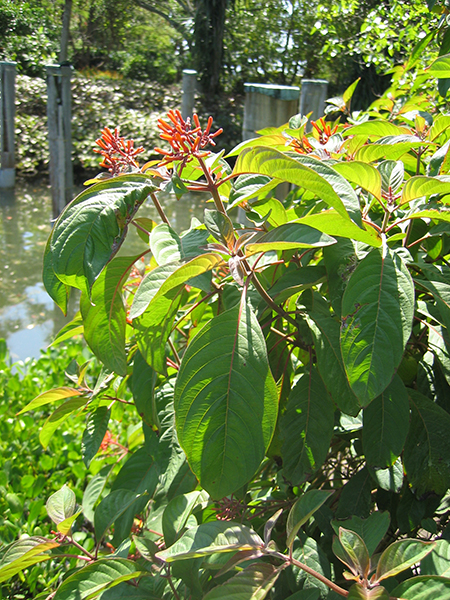 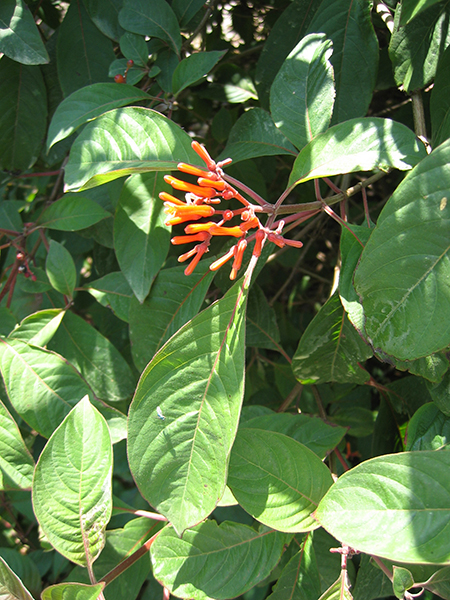 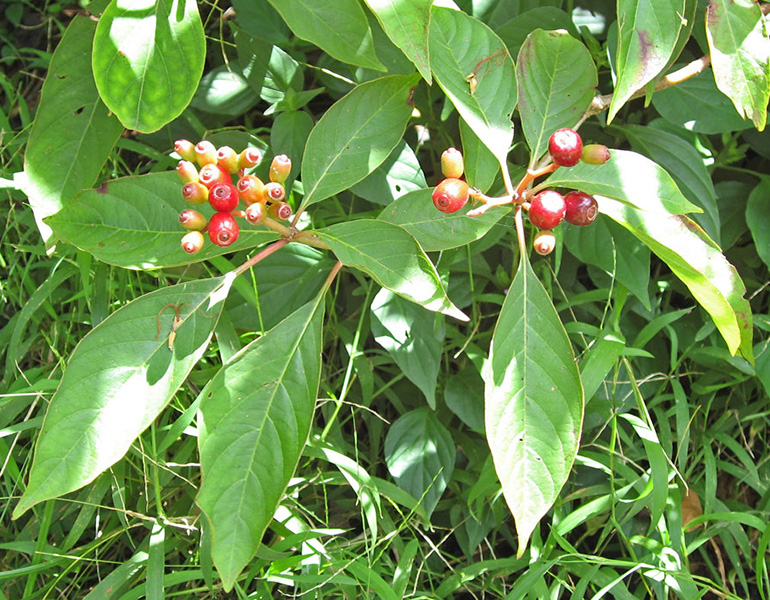 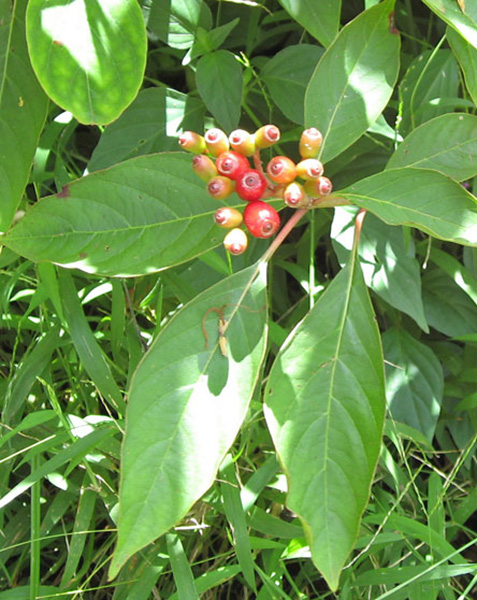 
Fire Bush is a showy, fast-growing, semi-woody evergreen shrub that can get up to 15 ft (4.6 m) tall under ideal conditions, but usually stays much smaller. It has whorled leaves, usually with three but occasionally as many as seven at each node. The leaves are elliptic to oval, about 6 in (15 cm) long, and gray-pubescent underneath with reddish veins and petioles. They are reflexed upward from the midvein. Throughout the year, Firebush produces showy terminal clusters (cymes) of bright reddish-orange or scarlet tubular flowers, each about 0.75 in (1.9 cm), long. Even the flower stems are red. The clusters of fruit also are showy. Each fruit is a juicy berry with many small seeds, ripening from green to yellow to red and finally to black. A Fire Bush plant usually has flowers and fruit in various stages.
(Floridata Plant Encyclopedia. 2004.)
Indigenous people in Belize use the plant to prepare a natural remedy to treat all types of skin problems including, sores, rashes, wounds, burns, itching, cuts, skin fungus, and insect stings and bites. The remedy is prepared by boiling a double handful of leaves, stems and flowers in 2 gallons of water for 10 minutes. After it cools, it is applied liberally to the affected area. This same remedy is also drunk as a tea to relieve menstrual cramps.
The Choco Indians in Panama drink a leaf infusion for fever and bloody diarrhea.
The Ingano Indians of northwest Amazonia prepare a leaf infusion for intestinal parasites.
Indigenous tribes in Venezuela chew on the leaves to lower body temperature to prevent a sun or heat stroke.
In the Peruvian Amazon, the leaves are used by the indigenous people for dysentery, fevers, rheumatism and scurvy. Leaves are also warmed or prepared into a poultice and applied externally as a pain reliever for bruises, strains, sprains, and other painful or inflamed conditions.
In Peruvian herbal medicine systems today the Scarlet Bush is used to reduce inflammation, relieve pain, and tp expel intestinal worms . It is also used there for dysentery, fevers, itchy conditions, skin diseases, rheumatism, parasites and scurvy.
In Brazil the root is used as a diuretic, while the leaves are used for scabies and headaches.
In Latin American herbal medicine systems scarlet bush is widely used for many affections including skin problems, diarrhea, fever, post partum pain, and menstrual disorders.
In Cuba the leaves are used externally for headaches and sores while a decoction is taken internally for rheumatism.
In Mexico it is widely used externally to stop staunch to flow of blood and heal wounds.
(Taylor, Leslie. 2004. The Healing Power of Rainforest Herbs.)

Fire Bush is a valuable addition to butterfly and hummingbird gardens, and in south Florida is often planted in wildlife gardens with other native shrubs such as American Beautyberry, Coral Bean and Wild Coffee. Fire Bush is salt tolerant and will grow in any kind of soil.
(Floridata Plant Encyclopedia. 2004.)

(Information for this species compiled and recorded by Camelia Cirnaru, NTBG Consultant.)
The plant is indigenous most all of South America, the West Indies, Mexico, and even southern Florida.
(Taylor, Leslie. 2004. The Healing Power of Rainforest Herbs.)
The Mayan name, Ix-canan, means "guardian of the forest."
Scarlet Bush is rich in active phytochemicals including alkaloids and flavonoids. It contains several of the same oxindole alkaloids as Cat's Claw (Uncaria tomentosa) including pteropodine and isopteropodine. These two chemicals have recently shown to have a positive modulating effect on brain neurotransmitters that are targets for drugs used in treating a variety of conditions including depression, anxiety, eating disorders, chronic pain conditions and obesity. Three new oxindole alkaloids have also been discovered in Scarlet Bush which have never been classified before. They have been named Hamelia patens alkaloid A, B and C. Scientists in India discovered that Scarlet Bush leaves contain small amounts (00.05%) of ephedrine, a stimulant alkaloid that has received some negative press of late. In addition, the aerial parts of the plant have been found to contain rosmarinic acid, a phytochemical that has demonstrated immune modulating and antidepressant activity.
The main plant chemicals documented in Scarlet Bush thus far include: apigenin, ephedrine, flavanones, isomaruquine, isopteropodine, maruquine, narirutins, oxindole alkaloids, palmirine, pteropodine, rosmarinic acid, rumberine, rutin, seneciophylline, speciophylline, and tannin.

Much of the clinical research on Scarlet Bush has validated the traditional uses of the plant. In animal studies, Scarlet Bush leaf extracts demonstrated analgesic, diuretic, and hypothermic actions. External use of the leaf in mice showed significant anti-inflammatory activity comparable to that of a prescription anti-inflammatory drug used as a control. Scientists in two different countries have documented Scarlet Bush's antibacterial and antifungal properties against a wide range of fungi and bacteria in several in vitro studies. The plant has also been documented with diuretic effects and was shown to inhibit the growth of tumor and bacteria cells.
(Taylor, Leslie. 2004. The Healing Power of Rainforest Herbs.)

We currently have 30 herbarium specimens for Hamelia patens in our collection. Click on any specimen below to view the herbarium sheet data.