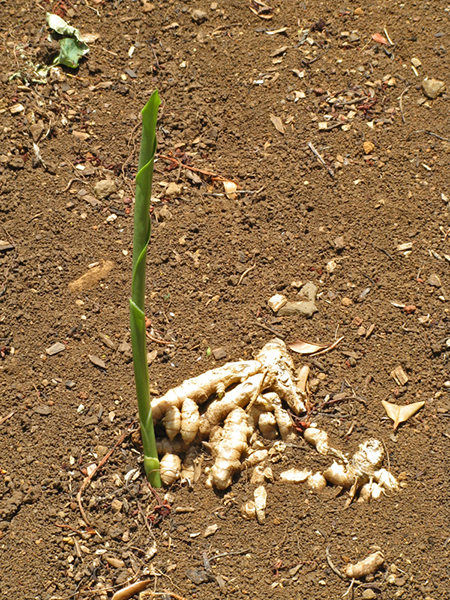 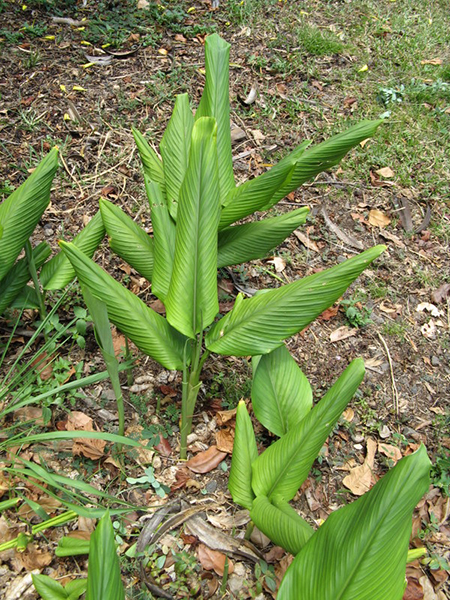 
Curcuma longa is a perennial plant with  oblong-palmate rhixomes or tubers, with a deep orange color inside. Leaves are 1-2 feet long, 3-7 inches wide, lanceolate, oblong or elliptic, tapering at each end, smooth, of a uniform green (lacking purple coloration along midrib), the petiole as long as or shorter than the blade. Flowers are produced in erect  inflorescences along with the leaves, cylindrical, 4-8 inches long, 2-3 inches wide, with green fertile bracts and a crown of white and green to pink sterile bracts, flowers dull yellow, three or five together surrounded by white and pink bracteoles. Fruit is rarely produced.  It is propagated by cuttings from the rhizomes. In the fresh state, the rhizomes have a spicy aromatic fragrance, which becomes a more delicate aroma after drying.

Turmeric has long been used in Asian traditional medicine as a stomach tonic and blood purifier, and for the treatment of liver ailments, skin diseases and wound healing. It also was used externally, to heal sores, and as a cosmetic. In Thailand, Turmeric rhizomes have been use to treat dizziness, gonorrhea and peptic ulcers and as an appetite stimulant, carminative, astringent and antidiarrheal. Externally the rhizome is used to treat insect bites, ringworm, wounds, bleeding, and the teeth and gums. In Thailand, Turmeric is one of the most important folk remedies, with official sanction for use. Among the herbs often classified as spices, Turmeric is one of the best-researched for pharmacological effects. Today, it is considered potentially beneficial in treating or reducing symptoms associated with a wide range of health conditions, due to its antioxidant, antitumor, anti-inflammatory, and antibacterial effects.

Turmeric, with its brilliant yellow color, has been used as a dye, medicine, and flavoring since 600 BC. In 1280, Marco Polo described Turmeric as a vegetable with the properties of saffron, yet it is not really saffron. Indonesians used Turmeric to dye their bodies as part of their wedding ritual. Turmeric is a very important spice in India, which produces nearly the whole world's crop and uses 80% of it. Turmeric usage dates back nearly 4000 years, to the Vedic culture in India, when Turmeric was the principal spice and also of religious significance. In today's India, Turmeric is still added to nearly every dish, be it meat or vegetables. It is also grown in China and Indonesia.

Because of ancient trade, the origin of Turmeric cannot accurately be reconstructed, but it probably is native to South East Asia or South Asia.

Fresh Turmeric leaves are used in some regions of Indonesia and in Western Sumatra as a flavoring. Turmeric comes from the rhizomes of Curcuma longa. Ground Tumeric comes from the tuber-like  "fingers" which extend from the rhizome. It is boiled or steamed and then dried, and ground. Turmeric is mildly aromatic and has scents of orange or ginger. It has a pungent, bitter flavor. Turmeric is a necessary ingredient of curry powder. It is used extensively in Indian dishes, including lentil and meat dishes, and in Southeast Asian cooking. Turmeric is routinely added to mustard blends and relishes. It also is used in place of true saffron to provide color and flavor.

The yellow-orange color of Turmeric comes from yellow pigment found in the rhizomes called curcumin. Supplements standardized to curcumin are now found in the market. Specific complaints for which Turmeric has been shown effective include peptic ulcers, artherosclerosis, and alcohol induced liver toxicity. In one clinical study of smokers, curcumin was found to reduce the incidence of cell mutation. The anti-inflammatory activity of Turmeric has been compared to that of topical hydrocortisone. In modern medicine Turmeric is used to treat the following conditions and symptoms: 1. Digestive disorders: Curcumin induces the flow of bile, which breaks down fats. Extracts of turmeric root inhibited gastric secretion and protected against injuries caused by medications such as indomethacin and reserpine in an animal study. Further studies are needed to confirm these effects in humans. 2. Arthritis: Curcumin is an anti-inflammatory agent that relieves the aches and pains associated with arthritis. 3. Cardiovascular conditions 4. Cancer: Turmeric decreased symptoms of skin cancers and reduced the incidence of chemically caused breast cancer in lab animals. 5. Bacterial infection: The herb's volatile oil functions as an external antibiotic, preventing bacterial infection in wounds.

We currently have 16 herbarium specimens for Curcuma longa in our collection. Click on any specimen below to view the herbarium sheet data.