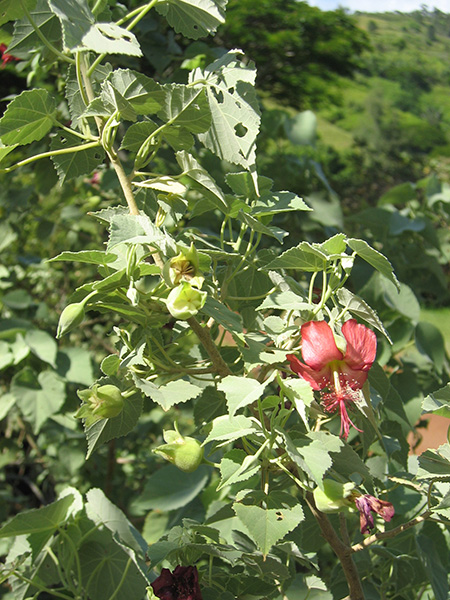 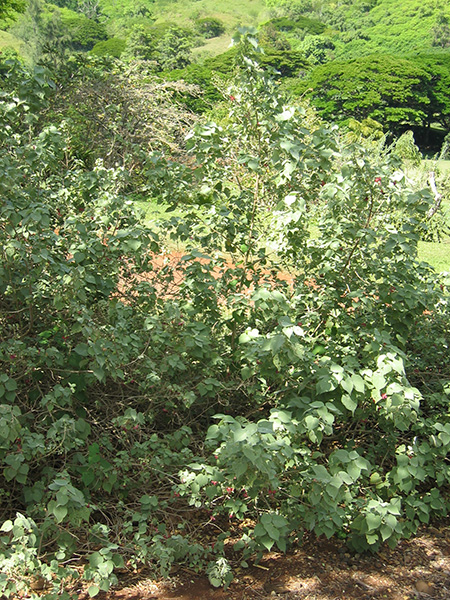 
Abutilon menziesii is a beautiful shrub with velvety light green, heart shaped leaves. This spreading shrub grows from 6 to 10 feet tall and about as wide. The roots have nitrogen fixing capabilities. The branches are covered with dense hairs and appear velvety. The simple heart-shaped, silvery leaves have toothed edges and vary in length from 1 to 4 inches. The leaves have 1 to 2 inch long stems that allow them to flutter in the wind. The single flowers are very showy, maroon to pink with a yellow center and yellow staminal column. They hang down like bells from the leaf axils. Seeds are found in capsule, dark-brown in color, with 18-24 small seeds in each capsule. On cultivated plants, flowering occurs throughout the year except during the hottest months. (Wagner,W.L., D.R. Herbst, and S.H. Sohmer. 1990. Manual of the Flowering Plants of Hawai'i.)

The toxic principle that causes mild allergic skin reaction is unknown. Future scientific research of the chemically active ingredients should be undertaken.

The Chinese lantern (Abutilon Xhybridum)is said to have poisonous leaves. Contact causes minor skin irritation that can last for a few minutes.

Hawaiians have used Abutilon flowers to make beautiful leis. Today the double-flowered form of Abutilon pictum (called the Lantern 'ilima or Royal 'ilima) is used. The magical history of the floral lei dates back to the ancient Hawaiians who wore braided leaves, native flowers, shells, feathers, stones and bones to beautify themselves. They also offered these hand-made garlands to each other and to their gods as a symbol of love and friendship. The lei was treasured and worn with pride by people of every age. During the Boat Days of the late 1800s, the popularity of the lei grew as visitors who arrived by ship were greeted with Aloha and presented with a floral leis. Legends grew around the luck of the lei. It was said if a departing visitor tossed their lei into the ocean and it floated back to the beach, it meant that the person would someday return to the islands. Hundreds of leis could be seen floating in the crystal waters off of Diamond Head as a ship steamed away. Today, the ancient tradition continues. The tender and beautiful lei is still carefully made by hand weaving fragrant and colorful flowers and leaves together to create a work of art. Leis are worn on all special occasions and given to family and friends as gifts of love. Leis represent a range of emotions and are presented at all types of occasions. The history and traditions of these gifts are timeless and are the ultimate symbol of the Aloha spirit. The lei is a symbol of Hawaii.

Abutilon menziesii has apparently been uncommon since its discovery in the 1800s, and is currently found in the dry forests of Lanai, East Maui and Hawaii. In 1981, a specimen collection was made in an abandoned cane field at Ewa, on the island of Oahu and identified as Abutilon menziesii. It was thought at the time to be an escape from cultivation, but today plants located at the Ewa location are recognized as a distinct Hawaiian endemic shrub. (Wagner,W.L., D.R. Herbst, and S.H. Sohmer. 1990. Manual of the Flowering Plants of Hawaii.)

Carpenter bees and honey bees have been observed on the flowers, although honey bees seem to have difficulty accessing nectar because of the small size of the flowers. The native bee Nesoprosopis has rarely been observed on flowers of this species, and may have been more important as a pollinator in the past. Seed dispersal agents, longevity of plants and seeds, specific environmental requirements, and other limiting factors are unknown. (USFWS.1995.)

We currently have 17 herbarium specimens for Abutilon menziesii in our collection. Click on any specimen below to view the herbarium sheet data.