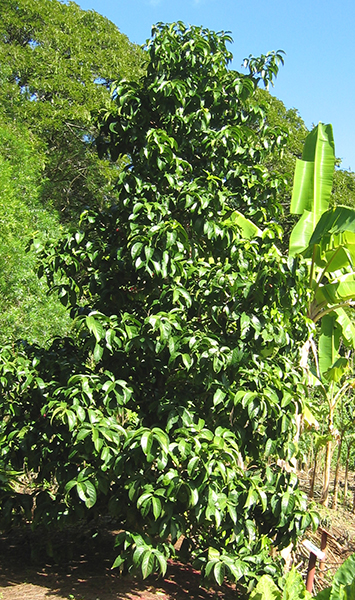 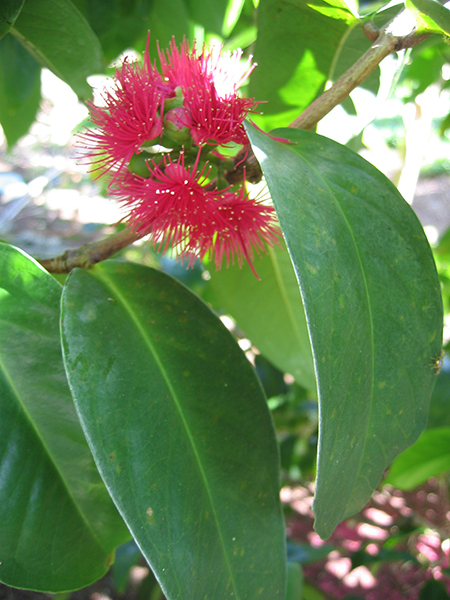 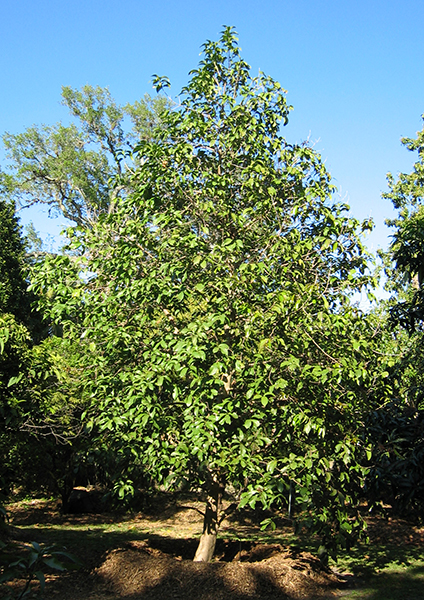 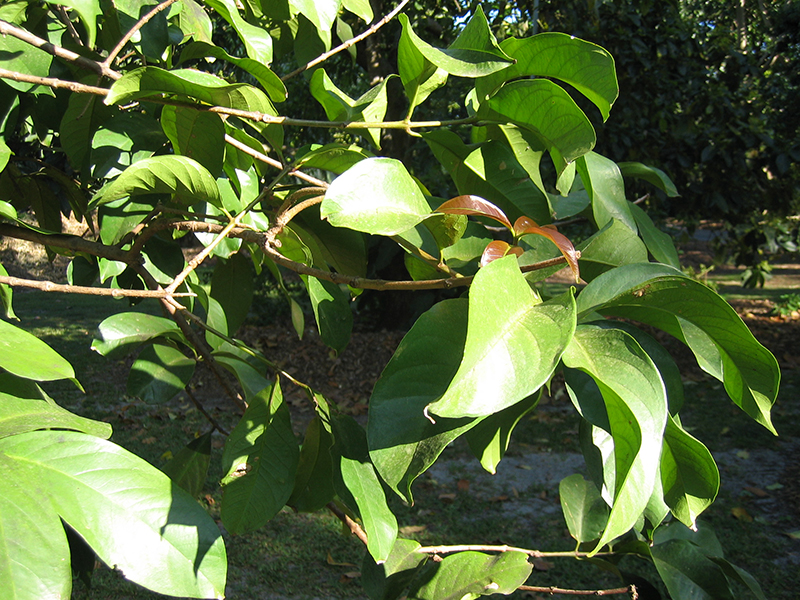 The Malay Apple tree is rather fast-growing, reaching 40 to 60 ft (12-18 m) in height, and has an erect trunk to 15 ft (4.5 m) in circumference and a pyramidal or cylindrical crown. Its evergreen leaves are opposite, short-petioled, elliptic-lanceolate or oblanceolate, soft-leathery, dark-green and fairly glossy on the upper surface, paler beneath, 6 to 18 in (15-45 cm) long, 3 1/2 to 8 in (9-20 cm) wide. The veins are indistinct above, but they and the pale midrib are prominent on the underside. New growth is wine-red at first, changing to pink-buff. The abundant flowers, only mildly fragrant, and borne on the upper trunk and along leafless portions of mature branches in short-stalked clusters of 2 to 8, are 2 to 3 in (5-7.5 cm) wide, and composed of a funnel-like base topped by 5 thick, green sepals, 4 usually pinkish-purple to dark-red (sometimes white, yellow or orange) petals, and numerous concolorous stamens to 1 1/2 in (4 cm) long tipped with yellow anthers. Though showy, the flowers are hidden by the foliage until they fall and form a lovely carpet on the ground. The fruit is oblong, obovoid, or bell-shaped, 2 to 4 in (5-10 cm.) long, 1 to 3 in (2.5-7.5 cm) wide at the apex, with thin, smooth, waxy skin, rose-red or crimson or sometimes white with streaks of red or pink. The fruit has white, crisp or spongy, juicy flesh of very mild, sweetish flavor. There may be a single oblate or nearly round seed or 2 hemispherical seeds, 5/8 to 3/4 in (1.6-2 cm) in width, light-brown externally, green internally and somewhat meaty in texture. The fruits of some trees are entirely seedless.
(Morton, J. 1987. Fruits of Warm Climates.)
The bark of Mountain Apple is traditionally used for medicine. The leaves are also used for medicine. It is said that young leaves from saplings and the bark from mature trees are made into a warm drink for the mother of a newborn baby. This is to assist in expelling the afterbirth and to cleanse the mother's body after giving birth or even after a miscarriage.
Remedies using pounded bark have been used in the mouth for lesions and also for lacerations.
The leaves can be processed for a tonic, and the old fruit of this plant was considered a helpful remedy for sore throats.
In the Molucca, or Spice Islands, a decoction of the bark is used to treat thrush.
Malayans apply a powder of the dried leaves on a cracked tongue. A preparation of the root is a remedy for itching. The root acts as a diuretic and is given to alleviate edema. The root bark is useful against dysentery, also serves as an emmenagogue and abortifacient.
Cambodians take a decoction of the fruit, leaves or seeds as a febrifuge. The juice of crushed leaves is applied as a skin lotion and is added to baths.
In Brazil, various parts of the plant are used as remedies for constipation, diabetes, coughs, pulmonary catarrh, headache and other ailments. Seeded fruits, seeds, bark and leaves have shown antibiotic activity and have some effect on blood pressure and respiration.
(Ka'ai'akamanu, D.K. and Akina, J.K. 1973. Hawaiian Herbs of Medicinal Value.)
(Morton, J. 1987. Fruits of Warm Climates.)
(Kepler, A. K. 1984. Hawaiian Heritage Plants.)
The trunk of the Mountain Apple tree was used by the people of old Hawai'i to build beams for their hale, house and for fashioning bowls and poi-boards. A reddish brown dye for making patterns on tapa bark cloth, was processed from the bark and the root of 'Ohi'a 'ai.
(Morton, J. 1987. Fruits of Warm Climates.)
(Kepler, A. K. 1984. Hawaiian Heritage Plants.)


It is said to have originated in India and Malaysia, which accounts for the fruit sometimes being called Malay Apple. This plant grows well on many Pacific Islands and is another of the plants whose seed were brought to Hawai'i by early Polynesian settlers.
It is commonly cultivated from Java to the Philippines and Vietnam, also in Bengal and South India.
(Morton, J. 1987. Fruits of Warm Climates.)
The ripe fruit is eaten raw though many people consider it insipid. It is best stewed with cloves or other flavoring and served with cream as dessert. Asiatic people in Guyana stew the peeled fruit, cooking the skin separately to make a syrup, which they add to the cooked fruit. Malayan people may add the petals of the red-flowered hibiscus (Hibiscus rosa-sinensis) to make the product more colorful. Malay Apples are often cooked with acid fruits to the benefit of both. They are sometimes made into sauce or preserves. The slightly unripe fruits are used for making jelly and pickles.

In Puerto Rico, both red and white table wines are made from the Malay Apple. The fruits are picked as soon as they are fully colored (not allowed to fall) and immediately dipped in boiling water for one minute to destroy surface bacteria and fungi. The seeds are removed and, for red wine, the fruits are passed through a meat grinder and the resulting juice and pulp weighed. To this material, they add twice the amount of water and 1 1/2 lbs (680 g) of white sugar per gallon, and pour into sterilized barrels with the mouth covered soon with cheesecloth. Yeast is added and a coil inserted to maintain circulation of the water. The barrels are kept in the coolest place possible for 6 months to 1 year, then the wine is filtered. It will be of a pale-rose color so artificial color is added to give it a rich-red hue. In making white wine, the fruits are peeled, the only liquid is the fruit juice, and less sugar is used, only 1 1/4 lbs (565 g) per gallon, so as to limit alcohol formation over a fermenting period of 3 to 6 months.

In Indonesia, the flowers are eaten in salads or are preserved in syrup. Young leaves and shoots, before turning green, are consumed raw with rice or are cooked and eaten as greens.
(Morton, J. 1987. Fruits of Warm Climates.)

Ohi'a 'ai is a relative of the Yellow Rose Apple and the crimson flowered 'Ohi'a 'lehua. The blossoms all secrete sweet nectars that attract birds and insects. 'Ohi'a 'ai is also related to Guava, Eucalyptus, Java Plum, Surinam Cherry and Allspice.
(Kepler, A. K. 1984. Hawaiian Heritage Plants.)
In Malaysia and India, the Rose Apple represents the golden fruit of immortality and is associated with the Buddha.
In Hawai'i, the red 'Ohi'a 'Lehua is associated with the goddess of the volcano and fire, Pele, about whom many songs and legends abound. It is also treated in reverence to Ku and Kane. This plant is considered the kinolau of Ku.
In Tahiti, the 'Ohi'a 'ai is called Ahia and was traditionally for sacred temple use. The 'Ohi'a 'Ai was perhaps one of the few fruit of the people of Hawai'i before others were introduced by Europeans and other later settlers. Indeed, it has been recorded that, before the arrival of missionaries in Hawai'i, there were no fruits except bananas, coconuts and the Malay Apple.
(Morton, J. 1987. Fruits of Warm Climates.)
(Kepler, A. K. 1984. Hawaiian Heritage Plants.)

We currently have 22 herbarium specimens for Syzygium malaccense in our collection. Click on any specimen below to view the herbarium sheet data.