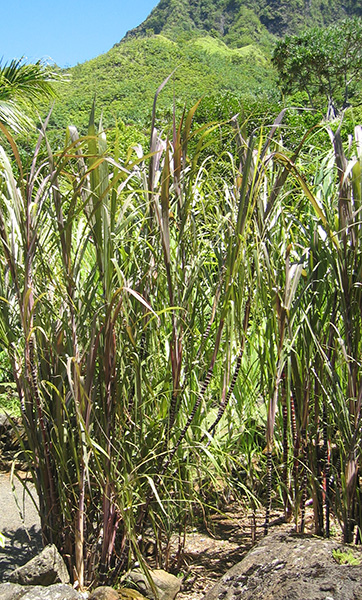 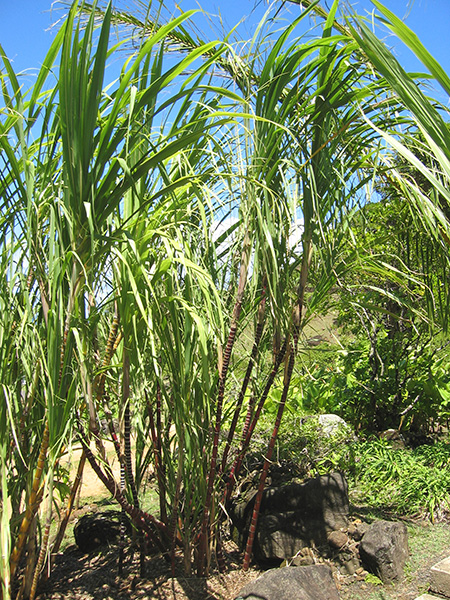 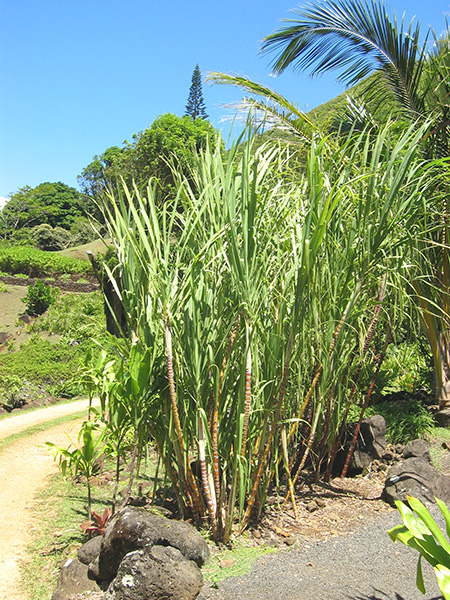 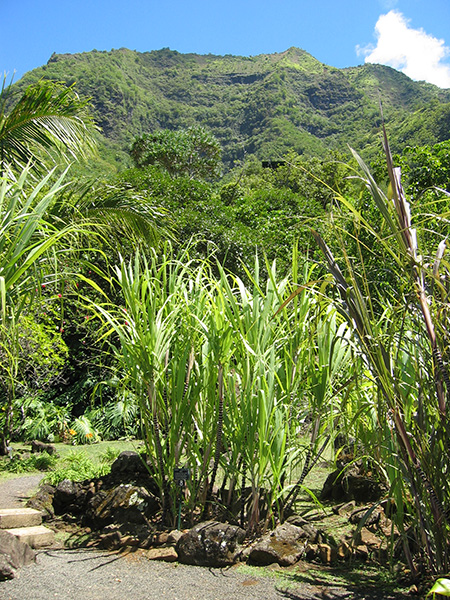 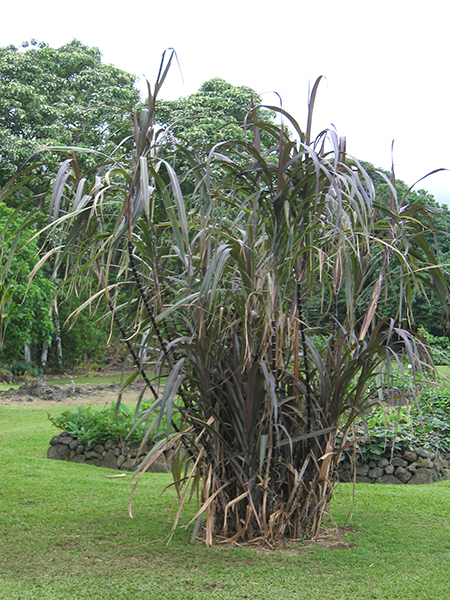 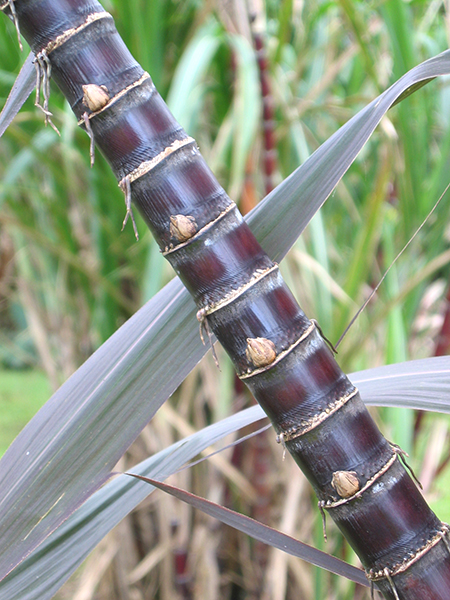 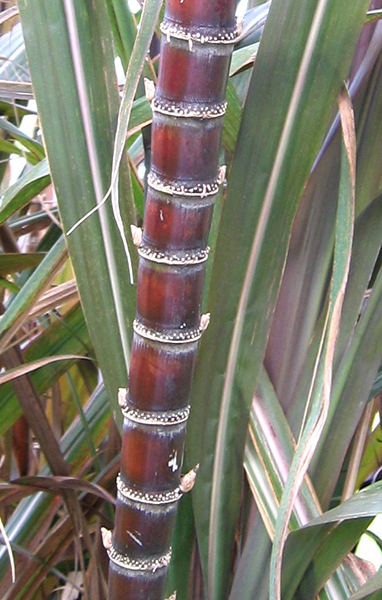 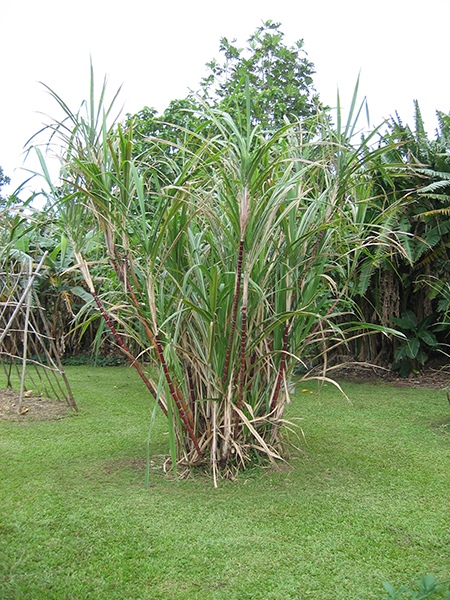 Sugar Cane is a perennial grass with unbranched stems or stalks that are 1-2 inches thick and, like bamboo, has clearly marked internodes. The stems range in color from red to purple, and from a pale green to green with pink or with yellow striations. The stalks are from 6 to 15-20 feet high, forming clumps as they grow. The stalks tend to lean as they heighten and are blown by the wind. Inside the stem is a fibrous and pithy material filled with sugar juice in the mature plant. The 1-2 foot long leaves are smooth, elongate blades, mostly 4-6 cm wide, with a very thick midrib and have saw-toothed edges that can cut the skin. Sugar Cane matures in 22-24 months. After about 2 years, at the end of the cane stem, the plant produces a silvery-rosy-lavender colored flower cluster, a spike, panicle plumelike, 20 to 60 cm long, the slender racemes drooping with spikelets about 3 mm long, obscured in a basal tuft of silky hairs 2-3 times as long as the spikelet. (Duke, James A. 1983. Handbook of Energy Crops.)

In Hawaii one of the few varieties used medicinally is Ko Kea, White Cane, a native Cane with yellowish-green stem and a thin skin that can be easily removed or crushed. This juice is popular as an ingredient in herbal combinations. It helps to make bad-tasting medicine taste better. Honua`ula, Red Cane, and the dark-colored Ko Lahi are also considered to have particular healing properties. Young Ko shoots were used for lacerations and cuts. Along with other plants and salt, the shoots were wrapped in Ti leaves and baked over charcoal. The juice was then squeezed and placed on a cut. (Krauss, Beatrice H. 1979. Native Plants Used As Medicine in Hawaii.) Sugarcane is a folk remedy for arthritis, bedsores, boils, cancer, colds, cough, diarrhea, dysentery, eyes, fever, hiccups, inflammation, laryngitis, opacity, penis, skin, sores, sore throat, spleen, tumors, and wounds (Duke, J.A. and Wain, K.K. 1981. Medicinal Plants of the World.) Powdered Sugar is used as a "drawing" agent for granulations and "proud flesh" and in a 1:3 ratio solution in water, for gonorrhea and vaginal discharges. (Hartwell, J.L. 1967-1971. Plants Used Against Cancer.) (Watt, J.M. and Breyer-Brandwijk, M.G. 1962. The Medicinal and Poisonous Plants of Southern and Eastern Africa.) The Malay women use it in childbirth. The pulped Sugar Cane is used to dress wounds, and the cane for splints for broken bones. A decoction of the root is used for whooping cough and the Cane juice is given for catarrh. It is used as a poultice for sprains. (Burkill, J.H. 1966. A dictionary of Economic Products of the Malay Peninsula.) In India, the plant as well as its juices are used for abdominal tumors. Sugar is a common adjunct to unpleasant medicines. Reported to be antidote, antiseptic, antivinous, bactericide, cardiotonic, demulcent, diuretic, intoxicant, laxative, pectoral, piscicide, refrigerant, and stomachic. (Duke, James A. 1983. Handbook of Energy Crops.)

Toxicity: the plant contains hydrocyanic acid. Sugarcane is a known teratogen (producing malformation in embryos) and is known to stimulate somatic mutations (aneuploidy and polyploidy) in plants. (Lewis, W.H. and Elvin-Lewis, M.P.F. 1977. Medical Botany.) Molasses, fed alone, or in large amounts with other feed, may produce diarrhea, colic, kidney irritation, urticaria, exanthema, leminitis, malanders, profuse sweating and paralysis, in domestic stock. Horses seem to be very susceptible, and 1.25 kg daily for 3 weeks, has proved fatal in some. Unrefined sugar, also toxic to the horse, may prove lethal. Twenty to fifty percent of unrefined sugar added to oat produces skin swelling, weakness in the hind quarters, paralysis of the urinary bladder, weakness of the heart, and sometimes, death. (Watt, J.M. and Breyer-Brandwijk, M.G. 1962. The Medicinal and Poisonous Plants of Southern and Eastern Africa.)

Molasses is used for explosives, synthetic rubber, and in combustion engines. Refuse Cane, called "bagasse" is used in the manufacture of paper, cardboard, and fuel. The reeds are made into pens, mats, screens, and thatch. The saw edge of the Sugar Cane leaf is used to scar the skin, in preparation of tatooing. The ground and dried Cane, after juice has been expressed, makes an excellent mulch and can be baled and shipped economically, because of its light weight. (Duke, James A. 1983. Handbook of Energy Crops.) (Information for this species compiled and recorded by Camelia Cirnaru, NTBG Consultant.)

Ko is one of the canoe plants of Ancient Hawai'i,brought by Polynesian settlers in their canoes sailing forth. Sugarcane originated in the South Pacific Islands and New Guinea and it is found throughout the tropics and subtropics. In the United States it is cultivated from Florida to Texas. Sugarcane is cultivated as far as north as Spain and as far south as South Africa. (Irvine, J.E. 1981. Sugarcane. Saccharum hybrids.)

Cane sugar, cane syrup, molasses, wax, and rum are products of Sugar Cane. The primary use for Sugarcane is the process sugar, which can then be used, in an infinite number of products. The type of sugar produced by Sugar Cane is called sucrose. This is the most important of all the sugars. Sucrose is used as a sweetening agent for foods and in the manufacture of cakes, candies, preservatives, soft drinks, alcohol, and numerous other foods. Although the use of sugar in the human diet is controversial, sucrose supplies about 13 percent of all energy that is derived from foods, making Sugar Cane one of the most important energy crop. Molasses is used as a sweetener and in industrial alcohol. Fresh cane stems are often chewed, especially by poorer people. Sugar is used as a preservative for fruits and meats. Cane is also made into a liqueur. The young unexpanded inflorescence is eaten raw, steamed or toasted, and prepared in various ways. A mixture of bagasse and molasses (Molascuit) is used as cattle feed. (Duke, James A. 1983. Handbook of Energy Crops.)

Some varieties are considered magical and are used ceremoniously.

We currently have 7 herbarium specimens for Saccharum officinarum in our collection. Click on any specimen below to view the herbarium sheet data.