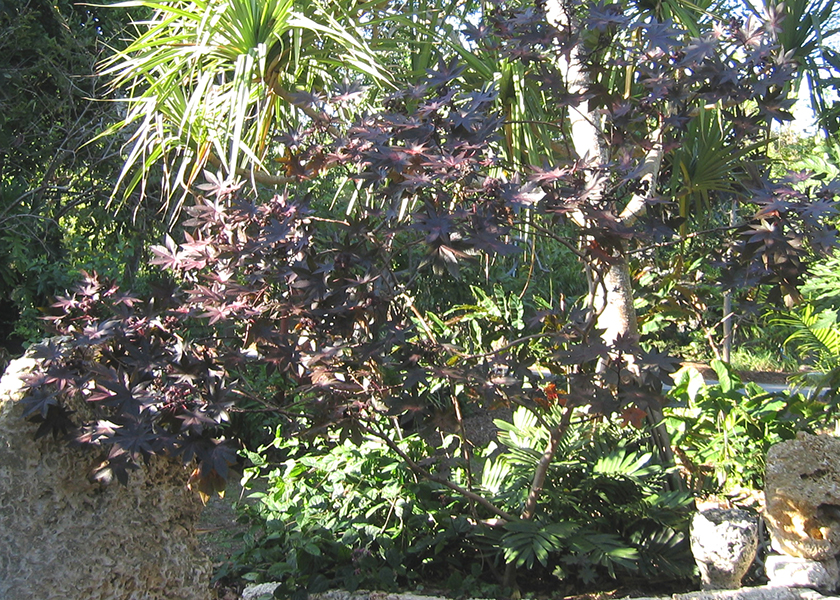 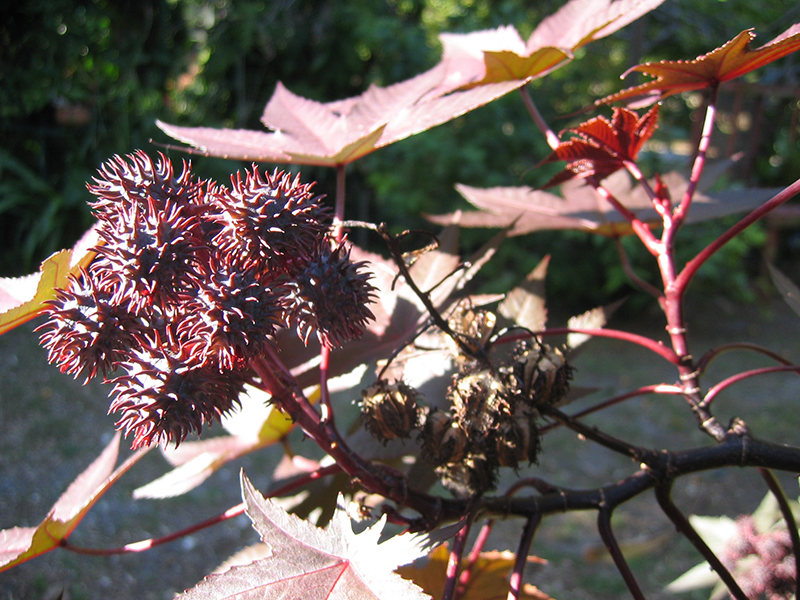 Castor Bean is an evergreen herbaceous or semi-woody large shrub or small tree that reaches 5 meters tall and 4.5 m wide. This is a fast growing plant that tends to grow straight up at first, and then develops branches later. The leaves are palmate, with 5-11 deeply incised lobes. They are glossy, green to purplish or reddish-green and 30 to 75 cm across, with long petioles (leaf stems). The stems are green to reddish-purple in color and have hollow internodes. The inflorescence (not particularly showy)has greenish yellow flowers that are borne in spikes up to 30 cm long near the tops of the stems. Female flowers are on the top half of the spike and have conspicuous red stigmas (the parts that receive the pollen). The male flowers on the lower half of the spike have showy yellow anthers (the parts that give off the pollen). The female flowers are followed by reddish brown, egg-shaped capsules, about 2.5 cm long, thickly covered with soft flexible spines. Each capsule contains three seeds that look like fat, swollen dog ticks and are deadly poisonous.
(Floridata Plant Encyclopedia. 2005)

The seeds from the Castor Bean plant, Ricinus communis, are poisonous to people, animals and insects. One of the main toxic proteins is "ricin", named by Stillmark in 1888 when he tested the beans' extract on red blood cells. If the seed is swallowed without chewing, and there is no damage to the seed coat, it will most likely pass harmlessly through the digestive tract. However, if it is chewed or broken and then swallowed, the ricin toxin will be absorbed by the intestines. It is said that just one seed can kill a child. Children are more sensitive than adults to fluid loss due to vomiting and diarrhea, and can quickly become severely dehydrated and die. Perhaps just one milligram of ricin can kill an adult.
The symptoms of human poisoning begin within a few hours of ingestion and they are: abdominal pain, vomiting, diarrhea, sometimes bloody. Within several days severe dehydration, a decrease in urine, and a decrease in blood pressure occurs.
(Alber, J.I., and D.M. Alber. 1993. Baby-Safe Houseplants and Cut Flowers: A Guide to Keeping Children and Plants Safely Under the Same Roof)
Castor Bean is cultivated for the seeds which yield a fast-drying, non-yellowing oil, used mainly in industry and medicines. Oil used in coating fabrics and other protective coverings, in the manufacture of high-grade lubricants, transparent typewriter and printing inks, in textile dyeing (when converted into sulfonated Castor Oil or Turkey-Red Oil, for dyeing cotton fabrics with alizarine), in leather preservation, and in the production of "Rilson", a polyamide nylon-type fiber.
Dehydrated oil is an excellent drying agent which compares favorably with tung oil and is used in paints and varnishes. Hydrogenated oil is utilized in the manufacture of waxes, polishes, carbon paper, candles and crayons. "Blown Oil" is used for grinding lacquer paste colors, and when hydrogenated and sulfonated used for preparation of ointments.
Castor Oil Pomace, the residue after crushing, is used as a high-nitrogen fertilizer. Stems are made into paper and wallboard.
(Reed, C.F. 1976. Information Summaries on 1000 Economic Plants. USDA Transcripts.)

Most gardeners grow Castor Bean plants in small groups as specimen plants to create a tropical look. This is a large, coarse textured plant that grows very fast in a single season to fill in a big area or serve as temporary landscaping or quick screening. In frost free areas they are grown in large borders or allowed to naturalize in the back of the landscape. In frosty climates, the Castor Bean plant is the best way to create a tropical effect around the swimming pool or patio.
(Floridata Plant Encyclopedia. 2005.)

Castor Bean is originally native to northeastern Africa and the Middle East. It has escaped cultivation and become naturalized as a weed almost everywhere in the world that has a tropical or subtropical climate. Castor Bean grows wild on rocky hillsides, and in waste places, fallow fields, along road shoulders and at the edges of cultivated lands.

Castor Bean has escaped cultivation and established in waste areas, the edges of cultivated fields, canal banks, etc., in South Florida, but it has not become a serious pest weed. It is, however, listed as a Category II Species - has the potential to disrupt native plant communities - by the Florida Exotic Pest Plant Council.
(Floridata Plant Encyclopedia. 2005.)

We currently have 16 herbarium specimens for Ricinus communis in our collection. Click on any specimen below to view the herbarium sheet data.