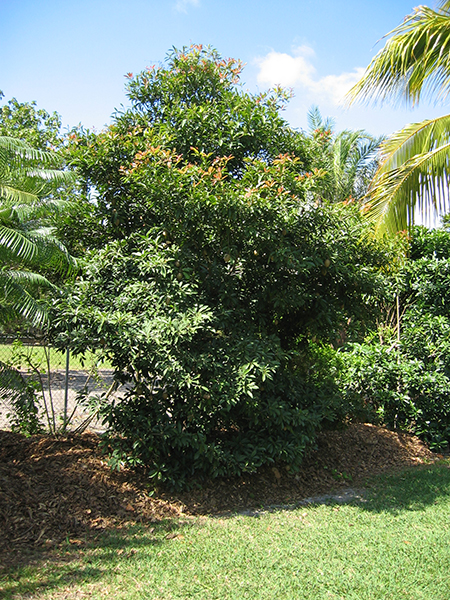 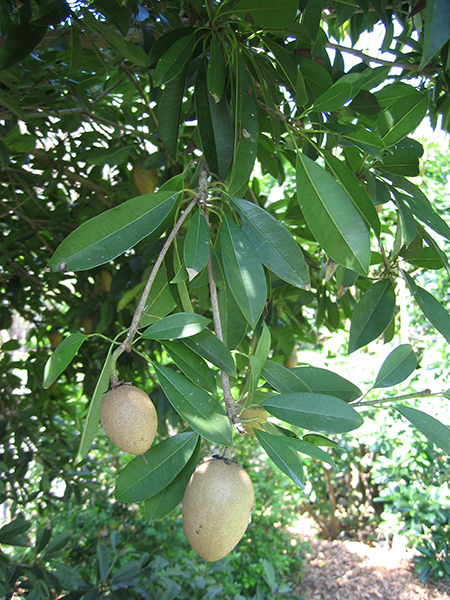 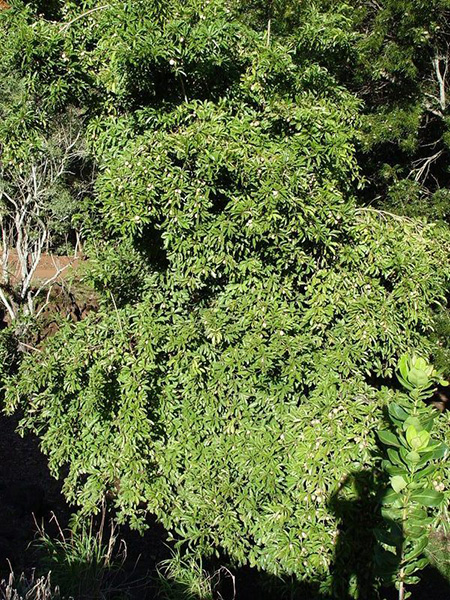 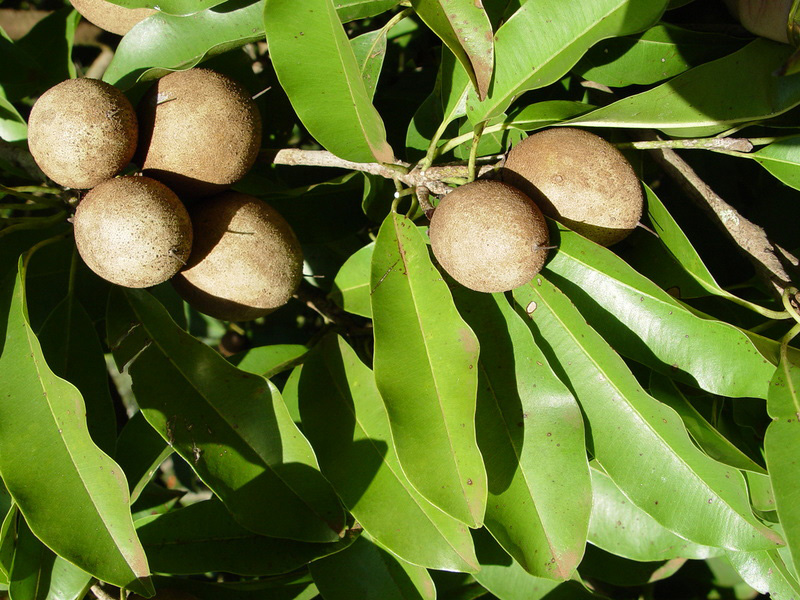 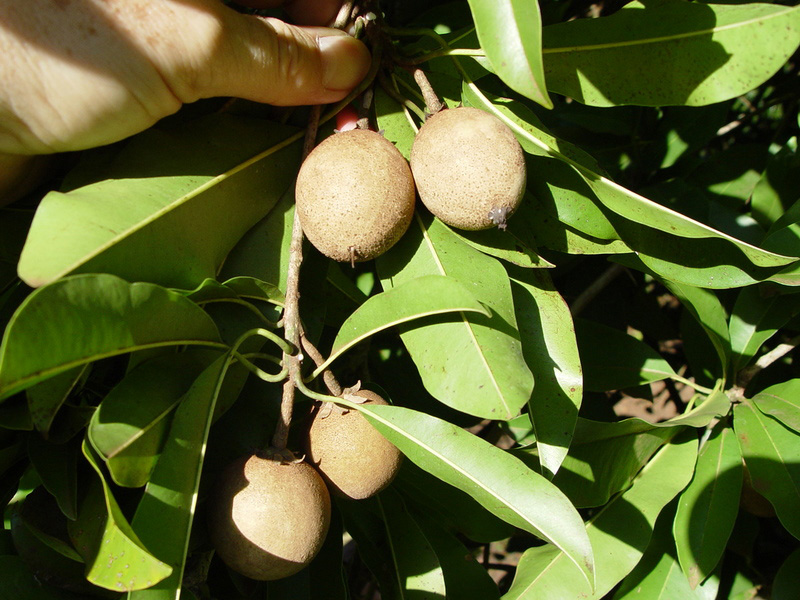 The Sapodilla is a fairly slow-growing, long-lived tree, upright and elegant, distinctly pyramidal when young, growing up to 60 ft (18 m) high in the open but reaching 100 ft (30 m) when crowded in a forest. It is strong and wind-resistant, rich in white, gummy latex. Its leaves are highly ornamental, evergreen, glossy, alternate, spirally clustered at the tips of the forked twigs; elliptic, pointed at both ends, firm, 3 to 4 1/2 in (7.5-11.25 cm) long and 1 to 1 1/2 in (2.5-4 cm) wide. Flowers are small and bell-like, with 3 brown-hairy outer sepals and 3 inner sepals enclosing the pale-green corolla and 6 stamens. They are borne on slender stalks at the leaf bases. The fruit may be nearly round, oblate, oval, ellipsoidal, or conical; varies from 2 to 4 in (5-10 cm) in width. When immature it is hard, gummy and very astringent. Though smooth-skinned it is coated with a sandy brown scurf until fully ripe. The flesh ranges in color from yellowish to light- or dark-brown or sometimes reddish-brown; may be coarse and somewhat grainy or smooth; becomes soft and very juicy, with a sweet flavor resembling that of a pear. Some fruits are seedless, but normally there may be from 3 to 12 seeds which are easily removed as they are loosely held in a whorl of slots in the center of the fruit. They are brown or black, with one white margin; hard, glossy; long-oval, flat, with usually a distinct curved hook on one margin; and about 1/4 in (2 cm) long. (Morton, J. 1987. Fruits of Warm Climates.)

Because of the tannin content, young fruits are boiled and the decoction taken to stop diarrhea. An infusion of the young fruits and the flowers is drunk to relieve pulmonary complaints. A decoction of old, yellowed leaves is drunk as a remedy for coughs, colds and diarrhea. A "tea" of the bark is regarded as a febrifuge and is said to halt diarrhea and dysentery. The crushed seeds have a diuretic action and are claimed to expel bladder and kidney stones. A fluid extract of the crushed seeds is employed in Yucatan as a sedative and soporific. A combined decoction of sapodilla and chayote leaves is sweetened and taken daily to lower blood pressure. A paste of the seeds is applied on stings and bites from venomous animals. The latex is used in the tropics as a crude filling for tooth cavities. (Morton, J. 1987. Fruits of Warm Climates.)

The seed kernel (50% of the whole seed) contains 1% saponin and 0.08% of a bitter principle, sapotinin. Ingestion of more than 6 seeds causes abdominal pain and vomiting. (Morton, J. 1987. Fruits of Warm Climates.)

A major by-product of the Sapodilla tree is the gummy latex called "chicle", containing 15% rubber and 38% resin. For many years it has been employed as the chief ingredient in chewing gum but it is now in some degree diluted or replaced by latex from other species and by synthetic gums. Chicle is tasteless and harmless and is obtained by repeated tapping of wild and cultivated trees in Yucatan, Belize and Guatemala. It is coagulated by stirring over low fires, then poured into molds to form blocks for export. Processing consists of drying, melting, elimination of foreign matter, combining with other gums and resins, sweeteners and flavoring, then rolling into sheets and cutting into desired units. The dried latex was chewed by the Mayas and was introduced into the United States by General Antonio Lopez de Santa Ana about 1866 while he was on Staten Island awaiting clearance to enter this country. He had a supply in his pocket for chewing and gave a piece to the son of Thomas Adams. The latter at first considered the possibility of using it to make dentures, then decided it was useful only as a masticatory. He found he could easily incorporate flavoring and thus soon launched the chicle-based chewing-gum industry. In 1930, at the peak of production, nearly 14,000,000 lbs (6,363,636 kg) of chicle were imported. Efforts have been made to extract chicle from the leaves and unripe fruit but the yield is insufficient. It has been estimated that 3,200 leaves would be needed to produce one pound (0.4535 kg) of gum. The latex is employed as birdlime, as an adhesive in mending small articles in India. It has been utilized in dental surgery, and as a substitute for gutta percha. The Aztecs used it for modeling figurines. Sapodilla wood is strong and durable and timbers which formed lintels and supporting beams in Mayan temples have been found intact in the ruins. It has also been used for railway crossties, flooring, native carts, tool handles, shuttles and rulers. The red heartwood is valued for archer's bows, furniture, bannisters, and cabinetwork but the sawdust irritates the nostrils. Felling of the tree is prohibited in Yucatan because of its value as a source of chicle. The tannin-rich bark is used by Philippine fishermen to tint their sails and fishing lines. (Morton, J. 1987. Fruits of Warm Climates.) (Information for this species compiled and recorded by Camelia Cirnaru, NTBG Consultant.)

The Sapodilla is believed native to Yucatan and possibly other nearby parts of southern Mexico, as well as northern Belize and Northeastern Guatemala. In this region there were once 100,000,000 trees. (Morton, J. 1987. Fruits of Warm Climates.)

Generally, the ripe Sapodilla, unchilled or preferably chilled, is merely cut in half and the flesh is eaten with a spoon. It is an ideal dessert fruit as the skin, which is not eaten, remains firm enough to serve as a "shell". Care must be taken not to swallow a seed, as the protruding hook might cause lodging in the throat. The flesh, of course, may be scooped out and added to fruit cups or salads. A dessert sauce is made by peeling and seeding ripe sapodillas, pressing the flesh through a colander, adding orange juice, and topping with whipped cream. Sapodilla flesh may also be blended into an egg custard mix before baking. It was long proclaimed that the fruit could not be cooked or preserved in any way, but it is sometimes fried in Indonesia and, in Malaya, is stewed with lime juice or ginger. I found that Bahamians often crush the ripe fruits, strain, boil and preserve the juice as a sirup. They also add mashed sapodilla pulp to pancake batter and to ordinary bread mix before baking. My own experiments showed that a fine jam could be made by peeling and stewing cut-up ripe fruits in water and skimming off a green scum that rises to the surface and appears to be dissolved latex, then adding sugar to improve texture and sour orange juice and a strip of peel to offset the increased sweetness. Skimming until all latex scum is gone is the only way to avoid gumminess. Cooking with sugar changes the brown color of the flesh to a pleasing red. One lady in Florida developed a recipe for sapodilla pie. She peeled the ripe fruits, cut them into pieces as apples are cut, and filled the raw lower crust, sprinkled 1/2 cup of raisins over the fruit, poured over evenly 1/2 cup of 50-50 lime and lemon juice to prevent the sapodilla pieces from becoming rubbery, and then sprinkled evenly 1/2 cup of granulated sugar. After covering with the top crust and making a center hole to release steam, she baked for 40 minutes at 350Âº F (176.67Âº C). Ripe sapodillas have been successfully dried by pretreatment with a 60% sugar solution and osmotic dehydration for 5 hours, and the product has retained acceptable quality for 2 months. Mr. Edward Smith of Crescent Place, Trinidad, made sapodilla wine and told me that it was very good. Young leafy shoots are eaten raw or steamed with rice in Indonesia, after washing to eliminate the sticky sap. (Morton, J. 1987. Fruits of Warm Climates.)

The species is found in forests throughout Central America where it has apparently been cultivated since ancient times. It was introduced long ago throughout tropical America and the West Indies, the Bahamas, Bermuda, the Florida Keys and the southern part of the Florida mainland. Early in colonial times, it was carried to the Philippines and later was adopted everywhere in the Old World tropics. It reached Ceylon in 1802. Cultivation is most extensive in coastal India (Maharastra, Gujarat, Andhra Pradesh, Madras and Bengal States), where plantations are estimated to cover 4,942 acres (2,000 ha), while Mexico has 3,733.5 acres (1,511 ha) devoted to the production of fruit (mainly in the states of Campeche and Veracruz) and 8,192 acres (4,000 ha) primarily for extraction of chicle (see under "Other Uses") as well as many dooryard and wild trees. Commercial plantings prosper in Sri Lanka, the Philippines, the interior valleys of Palestine, as well as in various countries of South and Central America, including Venezuela and Guatemala. (Morton, J. 1987. Fruits of Warm Climates.)

We currently have 8 herbarium specimens for Manilkara zapota in our collection. Click on any specimen below to view the herbarium sheet data.