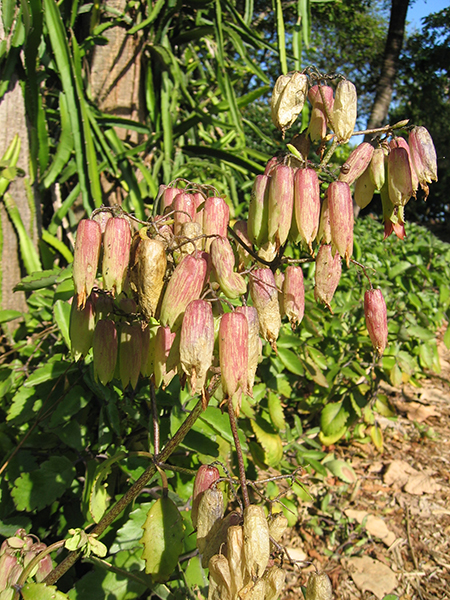 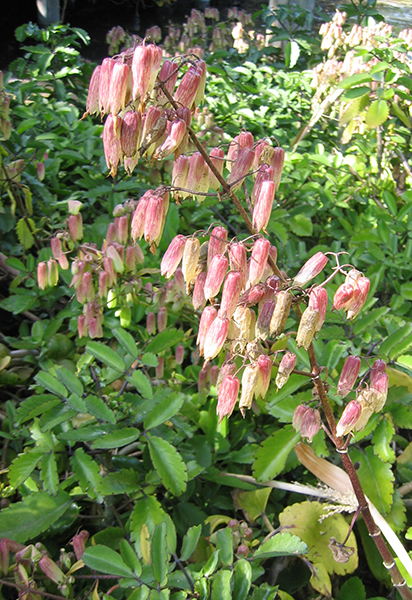 
Kalanchoe is a succulent perennial plant that grows 3-5 feet tall. Commonly known as 'air plant,' it has tall hollow stems, fleshy dark green leaves that are distinctively scalloped and trimmed in red, and bell-like pendulous flowers.
(Taylor, Leslie. 1998. Herbal Secrets of the Rainforest.)
Kalanchoe is somewhat of a panacea to the indigenous peoples of the Amazon. They employ it for many different purposes. The Creoles use the lightly roasted leaves for cancer and inflammations, and a leaf infusion is a popular remedy for fevers.
The Palikur mix the leaf juice with coconut oil or andiroba oil and then rub it on the forehead for migraines and headaches.
To the Siona indigenous peoples, Kalanchoe is known as "boil medicine" and they heat the leaves and apply them topically to boils and skin ulcers. Along the Rio Pastaza in Ecuador, natives use a leaf infusion for broken bones and internal bruises.
In Peru, indigenous tribes mix the leaf with aguardiente (sugar cane rum) and apply the mixture to the temples for headaches. They soak the leaves and stems overnight in cold water and then drink it for heartburn, urethritis, and fevers. The root is also prepared as an infusion and used for epilepsy.
Other tribes in the Amazon squeeze the juice from fresh leaves and mix it with mother's milk for earaches.
In Brazil the plant is considered a sedative, wound-healer, diuretic, anti-inflammatory and cough suppressant. It is used for all sorts of respiratory conditions-from asthma and coughs to bronchitis. It is also employed for kidney stones, gastric ulcers, skin disorders and edema of the legs. Externally a leaf infusion or the leaf juice is used for headaches, toothaches, earaches, eye infections, wounds, ulcers, boils, burns and insect bites.
In Peru the plant is employed for the same uses. In Mexico and Nicaragua kalanchoe is used for similar purposes and also to promote menstruation and assist in childbirth.
(Taylor, Leslie. 1998. Herbal Secrets of the Rainforest.)

This is the only Kalanchoe species found in South America, however, 200 other species of Kalanchoe are found in Africa, Madagascar, China and Java. A number of species are cultivated as ornamentals in the U.S. and they are becoming popular tropical house plants.
(Taylor, Leslie. 1998. Herbal Secrets of the Rainforest.)
With many of Kalanchoe's traditional uses verified by animal research, it is not unusual that it continues to be a popular natural remedy throughout the tropics where it grows. From upper respiratory infections and coughs to stomach ulcers and infections of the skin, eyes and ears. It is widely known and used as "Miracle Leaf." The clinical research performed to date with animals indicate that the leaves are not toxic at dosages up to 5 grams per kilogram of body weight (in rats) however there are a few reports of toxicity and even death when grazing animals (cows and goats) consumed excessive quantities of the leaves and flowers (estimated at 20 g per kg of body weight).
(Taylor, Leslie. 1998. Herbal Secrets of the Rainforest.)

Many of Kalanchoe's traditional uses can be explained by the clinical research conducted thus far on the plant. The traditional use for infectious conditions (both internally and externally) is supported by research indicating Kalanchoe leaves have antibacterial, antiviral and antifungal activity. The leaf and leaf juice have demonstrated significant in vitro antibacterial activity towards Staphylococcus, E. coli, Shigella, Bacillus and Pseudomonas, including several strains of multi-drug resistant bacteria. A water extract of Kalanchoe leaves (administered topically and internally) has been shown to prevent and treat leishmaniasis (a common parasitic disease in tropical countries which is transmitted by the bite of sand flies) in both humans and animals. In addition to its antibacterial properties, Kalanchoe's traditional uses for upper respiratory conditions and coughs might be explained by research demonstrating that the leaf juice has potent anti-histamine and anti-allergic activity. In an in vivo study (with rats and guinea pigs) the leaf juice was able to protect against chemically induced anaphylactic reactions and death by selectively blocking histamine receptors in the lungs. In another in vivo study scientists validated Kalanchoe's use for gastric ulcers; a leaf extract protected mice from such ulcer-inducers as stress, aspirin, ethanol and histamine. Other in vivo research confirms that kalanchoe can reduce fevers, and provides anti-inflammatory, pain-relieving and muscle relaxant effects. Its anti-inflammatory effects have been partially attributed to the immunomodulatory and immune suppressant effect documented by scientists in several studies. In several in vivo and in vitro studies, researchers reported that extracts of the leaf and/or juice suppressed various immune reactions, including those which trigger an inflammatory response as well as a histamine response. Kalanchoe has also shown sedative and central nervous system depressant actions in animal studies. These effects were attributed partially to the leaf extract demonstrating the ability to increase the levels of a neurotransmitter in the brain called GABA (gamma aminobutyric acid).
(Taylor, Leslie. 1998. Herbal Secrets of the Rainforest.)

We currently have 17 herbarium specimens for Kalanchoe pinnata in our collection. Click on any specimen below to view the herbarium sheet data.