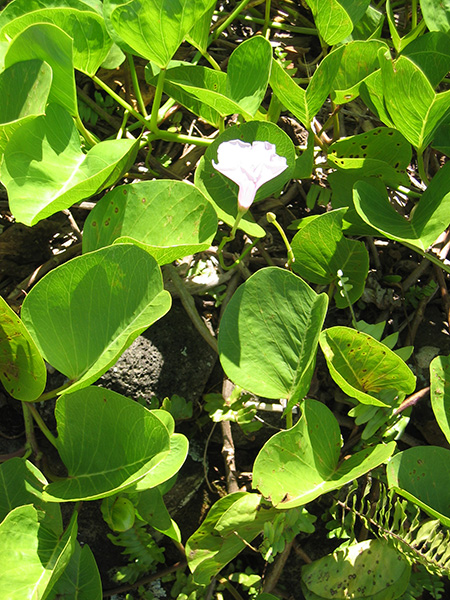 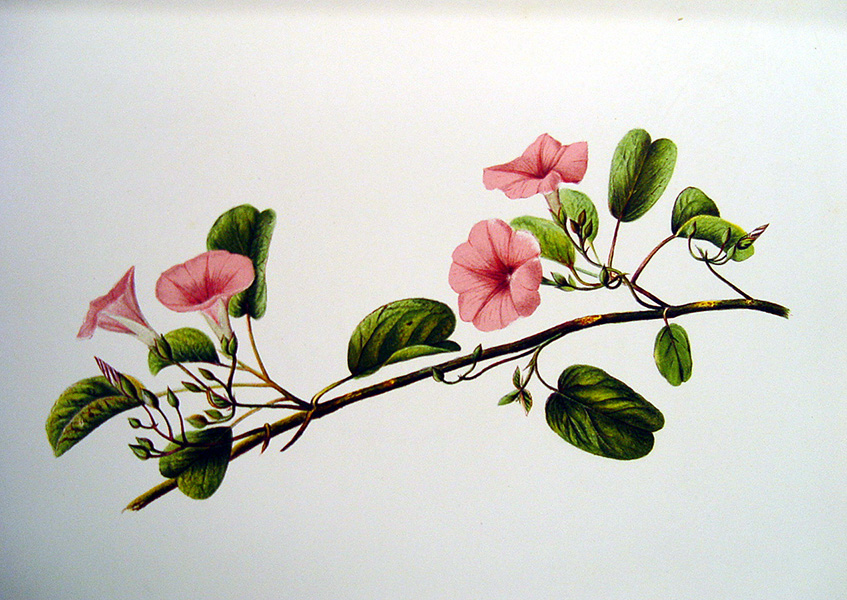 Pohuehue is a creeping vine with stems up to 5 meters long and a deep, fleshy tap-root. The alternate leaves are leathery 3 - 10 cm long and notched at the tip such that they resemble the shape of a goat foot. Flowers are trumpet-shaped approximately 3 - 5 cm long and pink to rose purple . Although growing under hot dry conditions, they are surprisingly fragile. Pohuehue’s seeds, enclosed in little woody capsule, are excellent floaters, staying viable after months of sea. Constantly drifting from one island to another, they have reached the farthermost islets in our vast Pacific Ocean.
Wagner,W.L., D.R. Herbst, and S.H. Sohmer. 1990. Manual of the Flowering Plants of Hawaii.)
(Kepler, A. K. 1984. Hawaiian Heritage Plants.)
Ancient Hawaiians used the seeds, roots, and leaves as a cathartic and as a poultice for skin ailments and broken bones.
(Kepler, A. K. 1984. Hawaiian Heritage Plants.)

Pohuehue is capable of absorbing water almost as salty as seawater. This requires special chemical processes to eliminate excess salt from the plant’s sap. Its leaves, which are not even hairy or succulent, seem not only to withstand the burning sun but actually thrive on it.
Sand also, for any “normal” plant, is a highly unsuitable substrate, possessing little nutriment to sustain life. Yet, as Pohuehue’s roots dig deeply into it, the vine grows rapidly and actually stabilizes large area of sand, preventing erosion from winds and high waters.
In addition to its remarkable manner of adapting to a harsh beach environment, Pohuehue has also managed to survive man’s distressing alterations to our coastline, a rare achievement indeed!
(Kepler, A. K. 1984. Hawaiian Heritage Plants.)
Pohuehue is suitable as a groundcover in sunny, well-drained sites. It is intolerant of shade and well adapted to salty coastal areas. It can be planted in areas of prevailing sea breezes and in sandy or stony soils. The cover it provides is not very dense and for best results it should be planted over mulch.
Pohuehue is often a host species for Kauna'oa (Cuscuta sandwichiana) which is the plant designated as the "flower" for the Island of Lana'i.
(Krauss, B. H. 1980. Creating a Hawaiian Ethnobotanical Garden.)


Pohuehue is native to tropical coastlines around the world and is found on both high and low islands, but less frequently on atolls. In the Pacific region plants are referred to the subspecies brasiliensis because of their somewhat smaller flowers and less deeply lobed leaves, compared with subspecies pes-caprae of the Indian Ocean area.
"Pes" means "foot" and "caprae" means "goat" referring to the shape of the leaf, which is unlike any other Morning Glory species.
(Kepler, A. K. 1984. Hawaiian Heritage Plants.)

We currently have 13 herbarium specimens for Ipomoea pes-caprae in our collection. Click on any specimen below to view the herbarium sheet data.