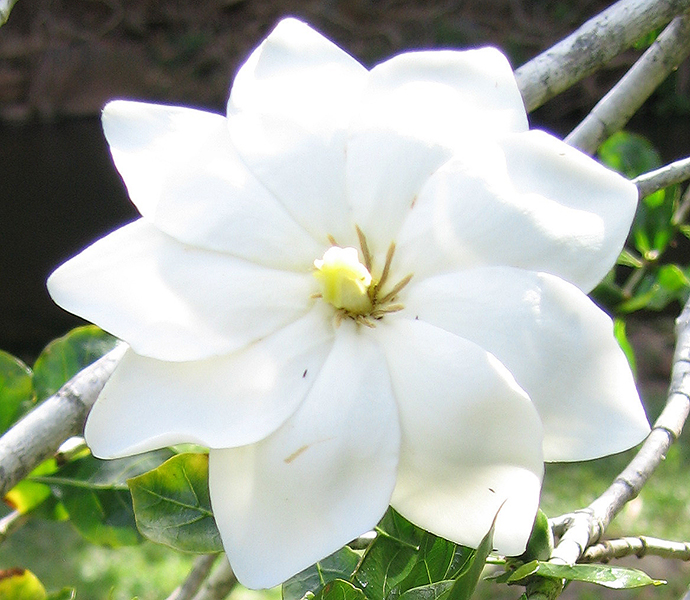 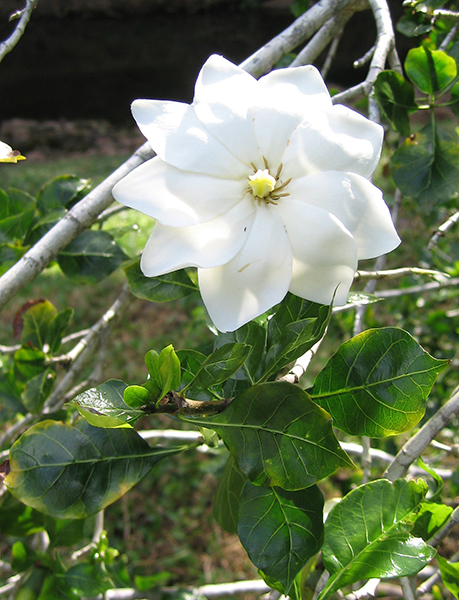 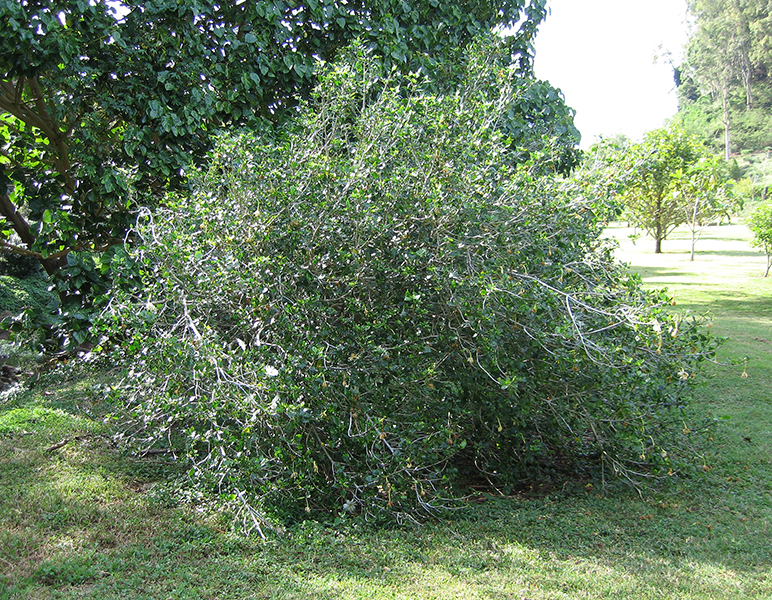 This is an evergreen shrub or small tree growing 2 to 5 m in height. The leaves are leathery, hairless, glossy light green and with clearly marked veins. The leaves are small, simple and oval in shape with entire margin. The flowers are large, showy, creamy white and heavily perfumed, particularly at night. They open from creamy-green buds. The flowers do not turn yellow as they age on the bush. Flowers are produced profusely during summer months from October to March.
The fruits are egg-shaped, green, hard, woody and fibrous inside. If antelopes do not graze the fruits they can remain on the bush for years.
(Glen, H.F. 1983. The Flowering Plants of Africa.)
Chinese herbal medicine makes the most extensive use of certain species of gardenia. The traditional medicinal actions attributed to gardenia include calming irritability, cooling blood, reducing swelling and moving stagnant blood. Gardenia is considered to be very effective in treating injuries to the muscles, joints, and tendons and as a hemostatic agent, which means that it stops bleeding. The plant is commonly used in Chinese herbal formulas to treat bladder infections, abscesses, and jaundice. It is also used in formulas to treat anxiety or insomnia. It is also considered helpful in treating insomnia and depression, nervous tension, headache, and dizziness.
(Gale Encyclopedia of Alternative Medicine. 2001.)

Gardenias are used extensively as exotic ornamental flowers, as houseplants or outdoor plants. A yellow silk dye has been made from the chemical compound acrocetin that is extracted from the fruit of gardenia.
(Gale Encyclopedia of Alternative Medicine. 2001.)

The country of origin is South Africa.
(Glen, H.F. 1983. The Flowering Plants of Africa.)
The genus Gardenia was named in honour of Dr. Alexander Garden (1730-1971) a Scottish physician who practiced in South Carolina and a correspondent of Linnaeus. Gardenia thunbergii was named after Carl Thunberg, 18th century botanist and pupil of Linnaeus.

We currently have 3 herbarium specimens for Gardenia thunbergia in our collection. Click on any specimen below to view the herbarium sheet data.