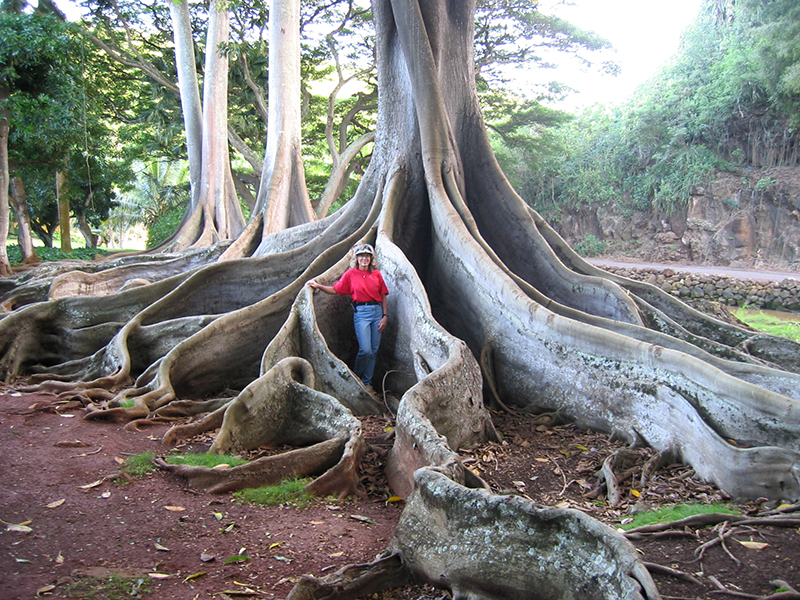 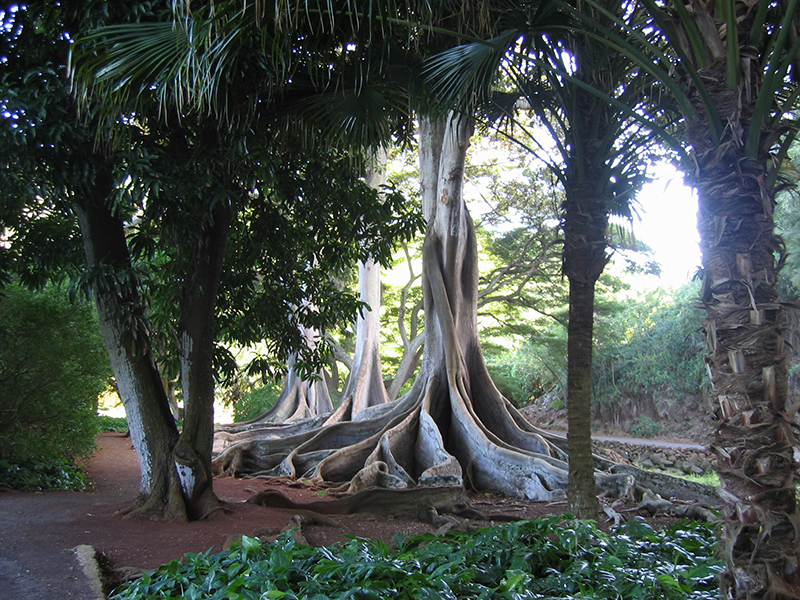 Moreton Bay Fig is a very tall tree with a huge trunk,growing to 50 m.
The leaves are simple, ovate-elliptical or oblong-elliptical, alternate, blade leathery, hairless and smooth, glossy dark-green above, brownish below, 10-23 cm long with a blunt point at the apex. The figs are orange to purple with creamy white dots, globular, up to 2.5 cm in diameter and ripe over several months of the year.
(Wagner, W.L., D.R. Herbst and S.H. Sohmer. 1999. Manual of the flowering plants of Hawai`i.)
Management Recommendation:
With the pollinator wasp present in Hawaii, Ficus macrophylla currently is spreading and will likely continue to do so. The distribution on Maui is currently not as widespread as other non-native Ficus species, such as Ficus microcarpa and Ficus platypoda. Control work should be done in areas with limited distribution of Ficus macrophylla trees and in areas where Ficus macrophylla could cause most severe harm, such as in watersheds and protected areas. Control methods will need to be investigated to figure out how to deal with epiphytic growth on native trees in steep and wet terrain. New locations of Ficus macrophylla should be monitored so that control work can be done before the situation gets beyond management. Ficus wasps should be prohibited from entry to Hawaii to prevent other Ficus trees from spreading beyond initial plantings and potentially causing harm to Hawaiiis native ecosystems.
(Starr,F., Starr,K. and Loope, L. 2003.)


Ficus macrophylla is native to tropical Queensland and northern New South Wales in Australia. (Riffle. 1998.)
Ficus macrophylla is widely cultivated. It is grown in the United States in Hawaii, California, and Florida. Apparently, Californians historically had a great interest in introducing and growing Australian plants for landscaping and therefore, Ficus macrophylla has been grown in California for much longer than in Florida. It is a drought tolerant banyan that is hardier to cold than most banyans and can withstand temperatures 28 F (-7 C) or above, though younger trees are more susceptible to cold. Trees grown in the continental United States do not grow as large as trees in their native habitat. It is cultivated and naturalized in New Zealand.
(Riffle. 1998.)

The aborigines in Australia consume the sweet fruit.
A species-specific wasp (Pleistodontes froggatti Mayr) is necessary for pollination of this tree. The small dry fruits of the Moreton Bay Fig, like those of other figs, are actually composed of hundreds of tiny flowers completely enclosed within the inverted fleshy tissue of the receptacle upon which they rest. A tiny hole (called an ostiole) in the tip of the fruit allows minute symbiotic wasps, which pollinate and lay their eggs within the flowers, to enter and leave the structure. The Moreton Bay Fig pollinator wasp Pleistodontes frogatti was purposefully introduced to Hawaii in 1921. The wasp successfully established and reproduction of Ficus macrophylla has been documented on Maui and Hawaii.
(Oppenheimer and Bartlett 2000., Starr et al. 2002.)
(Wagner et al.1999.)
Plants are initially spread by humans, which grow the plant for ornament. Various birds were observed foraging and roosting in other Ficus trees on Maui include mynah birds (Acridotheres tristis tristis), blue faced doves (Geopelia striata), lace necked doves (Streptopelia chinensis), Japanese white-eye (Zosterops japonicus), and house sparrows (Passer domesticus), though there are probably more. Other animals, such as bats, pigs, rodents, parrots, and monkeys may be capable of spreading fruit.
This species has many invasive characteristics including prolific fruit production, small seeds that are bird dispersed, ability to invade both disturbed and native forests, and difficulty in control due to epiphytic growth and steep terrain.
In Hawaii, Ficus macrophylla is spreading from initial plantings to adjacent areas. Numerous fruits are born on mature trees, attracting fruit eating birds that disperse the small seeds. Seeds often germinate in trees and grow as epiphytes, eventually replacing the host tree. Native tree species, such as Koa (Acacia koa) and Ohia (Metrosideros polymorpha), are often hosts of Ficus macrophylla. The host trees will eventually be strangled and replaced by the Ficus macrophylla.
In New Zealand, fruit is readily eaten by blackbirds (Turdus merula) and many other animals including possums (Trichosurus vulpecula)
(Gardner and Early.1996.)
The species name, "macrophylla" suggests the large size of the leaves.


This large Banyan is cultivated for its impressive size as a specimen or avenue tree. In the United States, it has long been cultivated in California and more recently in Florida. In cultivation, the tree reaches lesser heights than in its native habitat and it is said to be somewhat cold and drought tolerant. In the State of Hawaii, over 36,000 trees were planted for reforestation between 1910 and 1960, mostly on Hawaii and Oahu, with fewer on Kauai. On Maui, Ficus macrophylla trees are observed in plantings in yards, old estates, parks, botanical gardens, and near buildings.
(Riffle. 1998.)
(Skolmen.1910.1960.)

We currently have 5 herbarium specimens for Ficus macrophylla in our collection. Click on any specimen below to view the herbarium sheet data.