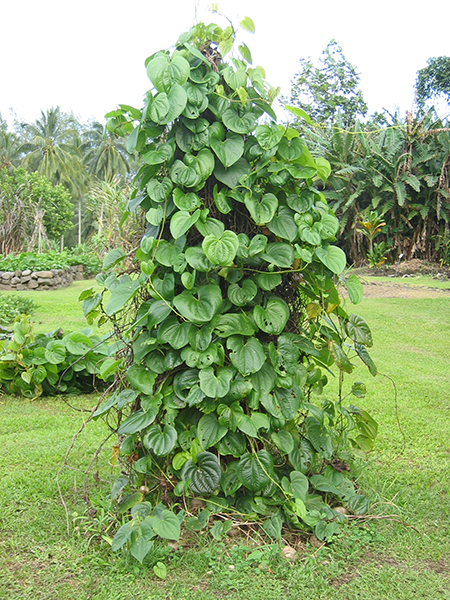 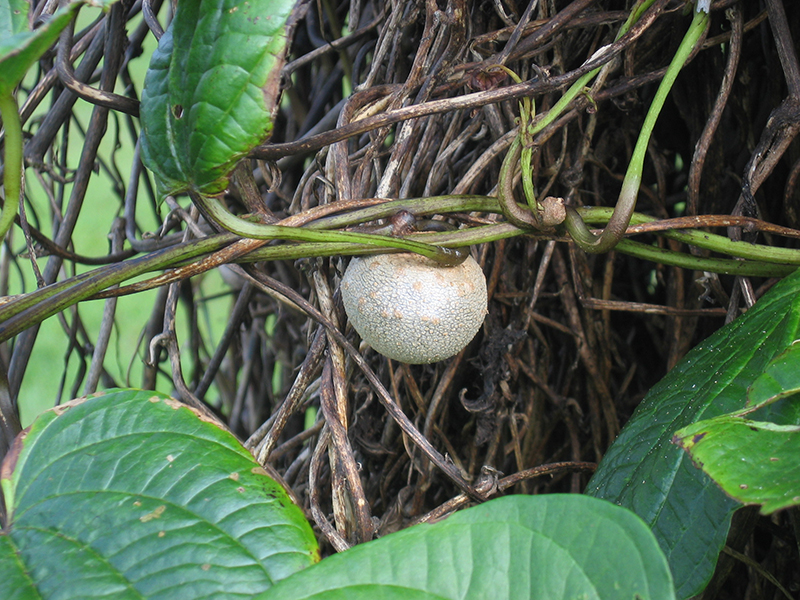 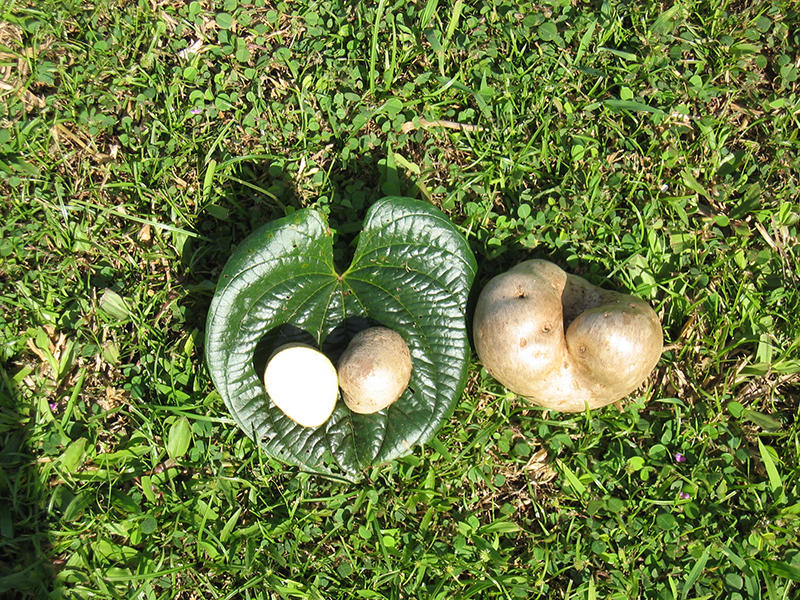 Air Potato has a winter dormant period when the stems die back to the ground. After dormancy, the underground tubers give rise to stems which quickly grow, often reaching up to 70 feet long by the end of the growing season. The vine's stem is herbaceous, not woody and round. The large leaves are up to 8 inches long and are heart-shaped (cordate). The leaf blade's basal lobes are rounded. Leaf veins radiate from a single point. The leaves have long stems (petioles), and are alternate on the stem. Air Potato flowers are small, greenish and fragrant, hanging in relatively long clusters (panicles and spikes) up to 4 inches long. The fruit is a capsule of seeds. Air potato plants produce "aerial tubers" that are attached closely to the stems where leaves attach to the stem (axil). These air potatoes are grayish and somewhat irregular. Tubers also grow underground where they may be larger.
(Stone, B. C. 1970. The flora of Guam).
(Wagner, W.L., D.R. Herbst and S.H. Sohmer. 1999. Manual of the flowering plants of Hawai'i).

In Florida, uncultivated forms are reported to be bitter and even poisonous.
(Florida State Noxious Weed Law).
(USFS Florida National Forests Invasive Plant Species Series).
The plant is native to South Asia and it is cultivated to a limited extent in tropical and subtropical areas of East Africa to Polynesia.
(Magness, J.R., G.M. Markle, C.C. Compton. 1971. Food and feed crops of the United States).
In Hawai'i, the air yam is a Polynesian introduction, naturalized primarily in mesic areas, especially shaded mesic valleys and disturbed mesic forest at elevation 5-670 m.
(Wagner, W.L., D.R. Herbst and S.H. Sohmer. 1999. Manual of the flowering plants of Hawai'i).

Dioscorea species are cultivated for their edible underground tubers in West Africa where they are important commodities. The Air Yam may attain several pounds in weight and are palatable and potato-like in flavor.
Dioscorea bulbifera is a non-native, invasive vine in Florida. Air Potato is believed to have been introduced into Florida as an ornamental and as a food plant in about 1905. By the early 1970s it was already recognized as a pest plant throughout the state.
(Florida State Noxious Weed Law).
(USFS Florida National Forests Invasive Plant Species Series).
Dioscorea varieties contain the steroid diosgenin, which is the principal material used in the manufacture of birth-control pills. The plant hormone diosgenin is similar in structure to the adrenal hormone DHEA and the ovarian hormone progesterone. Diosgenin has a balancing effect upon the body's hormones similar to the effects of DHEA and progesterone. Wild Yam can help to overcome the negative effects of declining levels of DHEA and progesterone that occur with aging. Natural plant hormones such as diosgenin are safer to take long term than are synthetic or animal forms of hormones. Wild Yam can help those with fatigue, depression and loss of sex drive. Diosgenin can be converted into progesterone that very closely matches the molecular structure of the progesterone produced by our own bodies.
(Magic and Medicine of Plants. 1993.)
(China GreatVista Chemicals Website.)

We currently have 29 herbarium specimens for Dioscorea bulbifera in our collection. Click on any specimen below to view the herbarium sheet data.