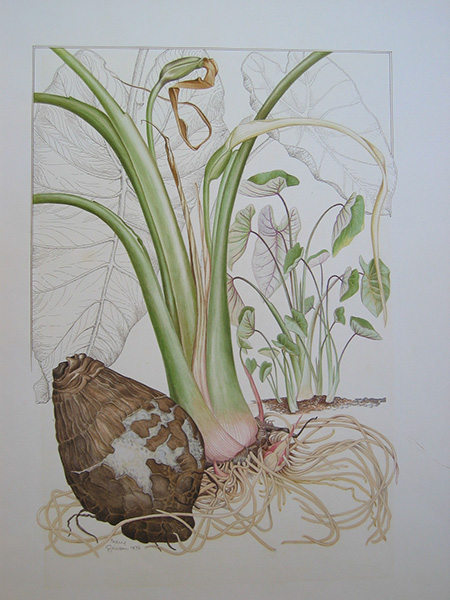 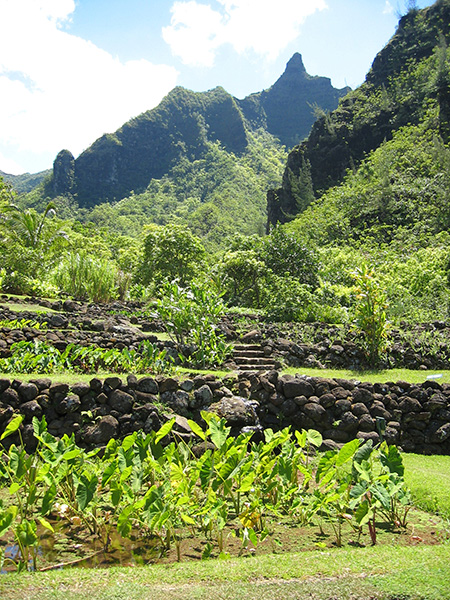 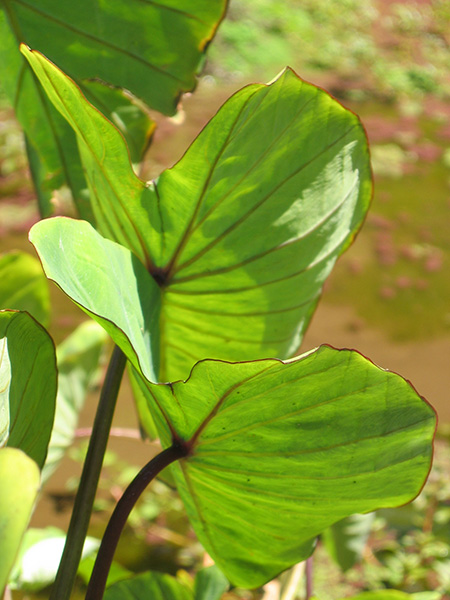 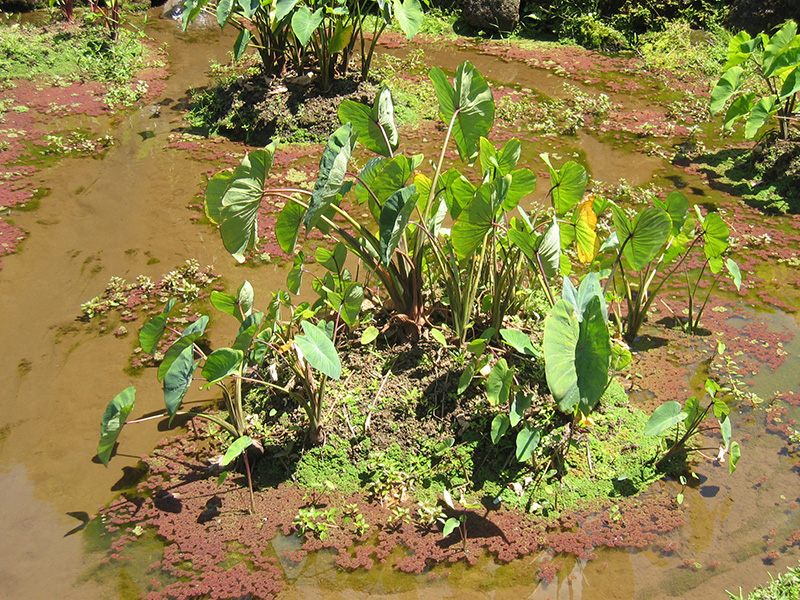 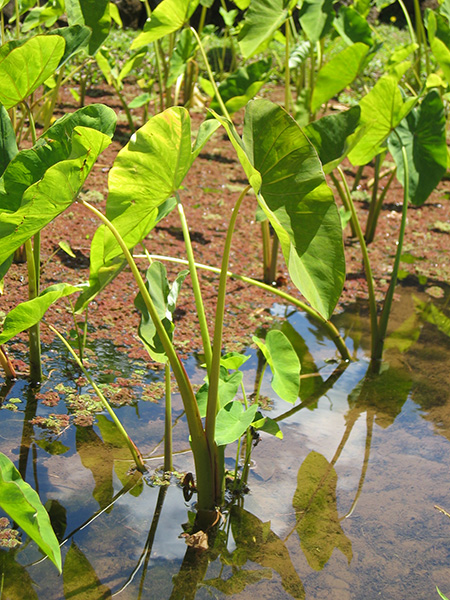 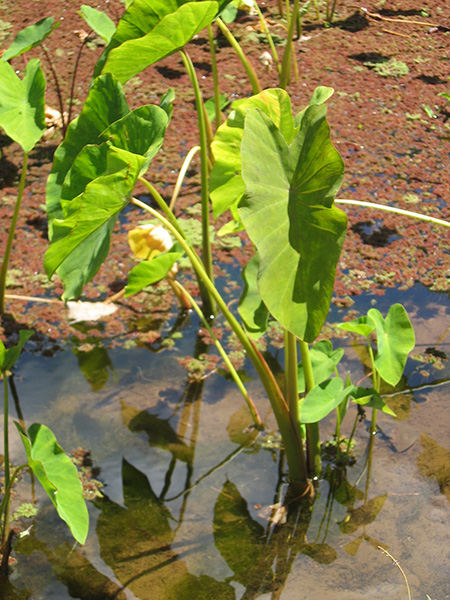 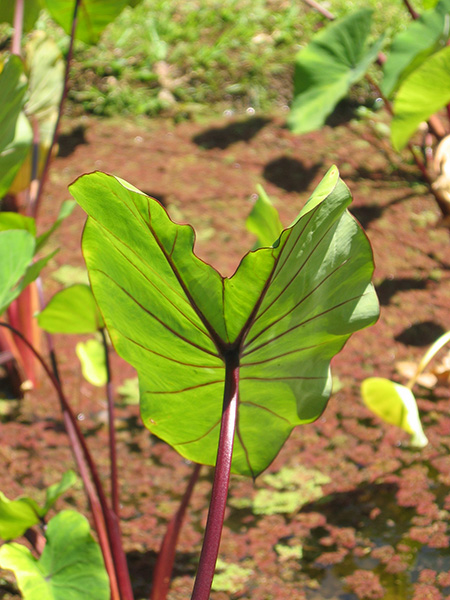 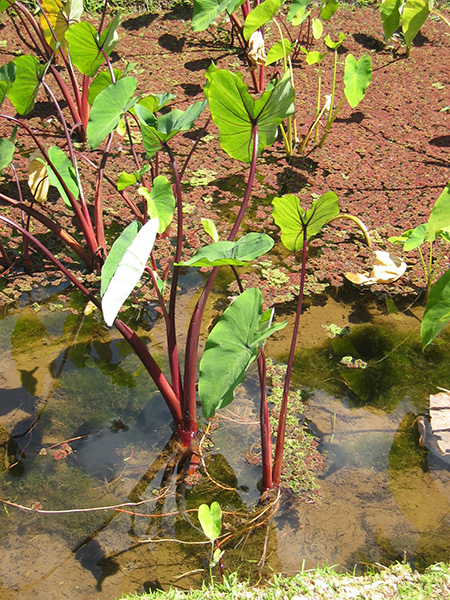 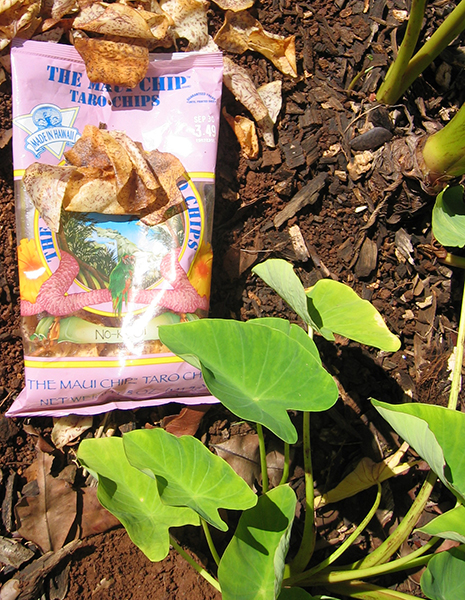 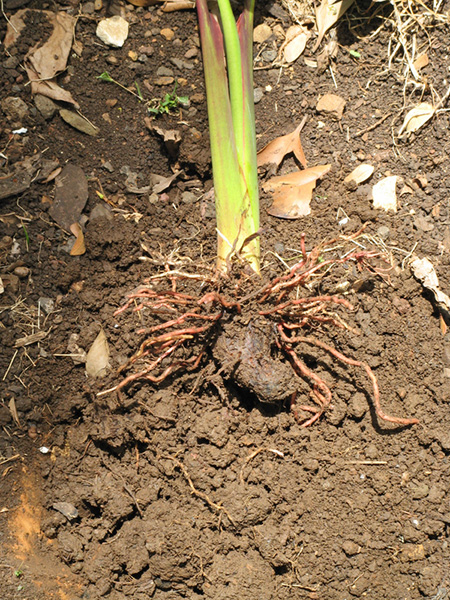 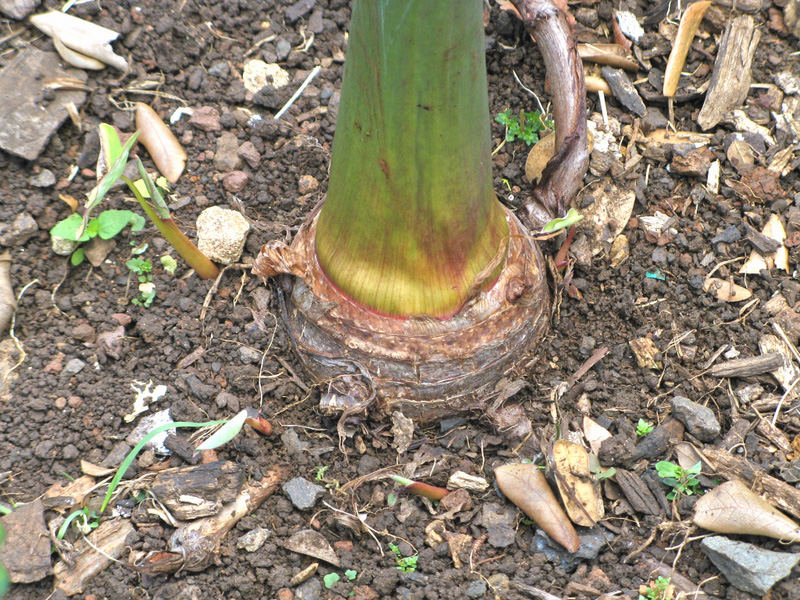 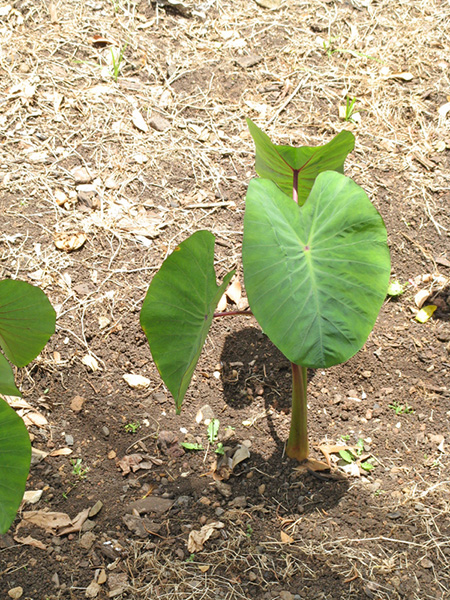 The Taro plant is a perennial herb with clusters of long heart- or arrowhead-shaped leaves that point earthward. Taro leaves grow on erect stems that may be green, red (lehua), black or variegated. The new leaves and stems push out of the innermost stalk, unrolling as they emerge. The stems are usually several feet high. Taro bears a short underground stem called a corm, where the plant stores starch produced by the leaves. In the eight to sixteen months of its development, the corm can grow as large as six inches in diameter. People raise taro to obtain this valuable starchy root. When the plant reaches maturity, it will produce a flower stalk in some leaf axils. Near the apex of the flower stalk appears the yellow-white, tubular spathe, or modified leaf, which covers and protects the flower cluster within. Inside grows an erect spike called the spadix. The spadix bears two kinds of flowers: the male and the female flowers. The male flowers lie toward the upper part of the spadix, and the female flowers lie toward the lower part. Tiny new plants appear around the base of the root corm. (Lucas, L. 1982. Plants of Old Hawaii)

The following are a few of the medicinal uses of poi and the Kalo plant. Poi is used to settle the stomach. Mixed with ripe Noni fruit, it can be applied for boils. Poi can be mixed with pia (arrowroot starch) and taken for diarrhea. Some infections respond to the use of Taro leaves mashed with Hawai'i salt. This poultice can be applied to an injury, covered and wrapped with a large Taro leaf. Undiluted poi is sometimes used as a poultice on infected sores. A piece of Taro stem, haha, can be touched to the skin to stop surface bleeding. For a sting from an insect, the stem leaf (petiole) can be cut and rubbed on the afflicted area, preventing swelling and pain. (Whistler,W.A. 1992. Polynesian Herbal Medicine.) The raw juice of Taro could be mixed with other juices to reduce fever. Also as a cure for thrush ('ea), the Hawaiians grated the corm and mixed it with the ash of burnt coconut (niu) meat. (Lucas, L. 1982. Plants of Old Hawaii.) The following preparation was regularly used as a laxative: the scraped inside of a peeled Taro is mixed with the juice of white sugar cane, the meat of one fully matured coconut and two ripe Morinda citrifolia (noni) fruits. The mixture is then strained with the fiber of the Cyperus laevigata. The dose is taken five times in succession. (Kaaiakamanu,D.M. and Akina,J.K. 1922. Hawaiian Herbs of Medicinal Value.) In Fiji a decoction of the leaves with the scraped root of yasi yasi (Syzygium effusum) is drunk to treat stomach disorders. A decoction of the shredded leaves is drunk to promote menstruation while a decoction of the leaves and those of wabula (Merremia peltata) is used for the treatment of cysts, while the sap of the leaf stalk is used to treat conjunctivitis. The scraped steams of dalo and those of mulomulo (Thespesia populnea), kavika (Syzygium malaccense) and titi (unidentified) are added to a little water to provide a drink to encourage young children to eat when there is a loss of appetite. (Cambie,R.C.and Ash,J. 1994. Fijian Medicinal Plants.)

Before Taro can be eaten, all parts of the plant must be cooked, in order to break down the needle-like calcium oxalate crystals present in the leaves, stem and corm. These crystals could be extremely irritating to the throat and mouth lining, causing burning and stinging sensation. (Miller, C.D. 1929. Food Values of Breadfruit, Taro Leaves, Coconut and Sugar Cane.)

Scientists and environmetalists are working in reviving the system of mixed cultures, modernly called agroforestry, because the 20th century monoculture technique made Taro very much susceptible to diseases. (NTBG Internal Notes. 2003.)

Mud from the Taro patch was used as a black dye for lauhala and kapa cloth, while some leaf-stem juice yielded red dye. Also, diluted poi was used as a paste to glue together pieces of kapa cloth. (Krauss,B.H. 1993. Plants in Hawaiian Culture.) (Information for this species compiled and recorded by Camelia Cirnaru, NTBG Consultant.)

Taro was brought to Hawai'i by the earliest Polynesian settlers in their canoes and has been cultivated as a staple from ancient times in the tropical and subtropical latitudinal band around the earth. Taro grows in tropical Africa, the West Indies, Pacific island nations, and countries bordering the Indian Ocean in South Asia. (Lucas,L. 1982. Plants of Old Hawaii)

In Hawai'i, where cultivation has been the most intense, in the early days there were more than 300 named varieties of Taro. Approximately 87 of these varieties are still recognized today, with slight differences in height, stalk color, leaf or flower color, size, and corm type. Some of the local varieties are Mo'i, Lehua and Ha'akea. Depending on the variety, all parts of this sturdy and vital plant are eaten. The Hawaiians cook the immature leaves of the plant in water or steam them. The leaves are served as greens, sometimes cooked with coconut milk (wai a ka niu) or in a leaf packet (laulau). The stems are eaten peeled and boiled. The fibrous flesh of the corms is tough and spongy, ranging in color from white, yellow, lilac-purple and pink to reddish. Grated Taro is also steamed or baked with coconut cream to make a pudding called kulolo. The corms are eaten baked, boiled or steamed, or cooked and mashed with water to make poi. Most important is the starchy tuber with enough glutinosity to make quality poi. Poi is eaten fresh or allowed to ferment for a few days often for longer, creating a sour taste considered pleasantly acid, but not alcoholic. The stiffest poi is called locally "one finger" and the most liquid "three fingers". "Two fingers" poi is considered the best by some. The planters know which kind of taro makes the best poi, which variety has the tenderest leaves, and which has the necessary medicinal properties. Taro is often fed to babies as their first whole and natural healthy food, as well as to the elderly, for it is easy to digest and has high vitamin content. Some people call poi the "soul food" of Hawai'i. In the old days, a person might consume up to five pounds of poi per day. (Lucas,L. 1982. Plants of Old Hawaii). It is said that Soviet astronauts ate dehydrated Taro in space, adding water to the packets. NOTE: Before Kalo can be eaten, all parts of the plant must be cooked in order to break down the needle-like calcium oxalate crystals present in the leaves, stem and corm. These crystals could be extremely irritating to the throat and mouth lining, causing burning and stinging sensation. (Miller,C.D. 1929. Food Values of Breadfruit, Taro Leaves, Coconut and Sugar Cane.)

The life of Kanaka Maoli, the indigenous Hawaiian people, is linked closely with Kalo. Kalo is believed to have the greatest life force of all foods. According to the Kumulipo, the creation chant, Kalo grew from the first-born son of Wakea (sky father) and Papa (earth mother), through Wakea's relationship with his and Papa's daughter, Ho'ohokulani. Haloa-naka, as the son was named, was stillborn and was buried. Out of his body grew the Kalo plant, also called Haloa, which means "everlasting breath". Kalo and poi (pounded kalo) are a means of survival for the Hawai'i people. By eating Kalo as poi, one at a time as a ritual around the poi bowl('umeke) at the center of the diners, the protocol of Hawai'i is maintained. This is a ceremony of life that brings people together and supports a relationship of 'ohana (family) and of appreciation with the 'aumakua, the ancestors. (Krauss,B.H. 1993. Plants in Hawaiian Culture.) The species is thought to be a native of India and perhaps other parts of southern Asia and from there its cultivation has extended. It reached Egypt about 2,000 years ago and spread into the Pacific area in ancient times. However, it was in Hawaii that the cultivation of Taro, called Kalo, reached its most sophisticated level. Ancient Taro terraces (loi) can be seen in the Hanaley Valley, Kaua'i, and the remains of others are found in remote areas, now uninhabited, such as the Na Pali Coast of Kaua'i. The generic name "Colocasia" is a latinization of the Greek word "kolokasion'. This name has been used, according to the first-century Greek physician and herbalist Dioscorides, for the root of the lotus, Nelumbo nucifera, and borrowed for used as the scientific name for Taro. "Esculenta" means esculent or edible. (Green,P.S. 1996. A Hawaiian Florilegium.)

In Ancient Hawaii, before 1778, about 300 named varieties of Taro were grown in Hawaii. Subsequently, Hawaiians cultivated Taro inter-cropped with other species, such as Erythrina, banana, papaya, coconut, green peas, which ensure the maintenance of the health of Taro species. The 20th century brought the monoculture technique, which made Taro very much susceptible to diseases. Now, in the 21st century there are only 7 to 12 varieties cultivated in Hawaii. Diseases, such as fungal disease and pocket rot, and the introduced apple snails have severely impacted Taro cultivation in Hawaii. (Tavana,N.G. 2003. NTBG Internal Notes.)

The young leaves of Taro are rich in vitamin C and the roots are rich in a starch composed of amylase (28%) and amylopectin (72%). Taro contains thiamine (vitamin B1), riboflavin (vitamin B2), niacin, oxalic acid, calcium oxalate and a sapotoxin. The tubers contain aminoacids and high molecular weight proteins which inhibit human salivary (and the porcine) pancreatic amylases. The corms contain the anthocyanins pelargonidin 3-glucoside, cyaniding 3-rhamnoside, and cyaniding 3-glucoside. Hydroxycinnamoyl amides have been obtained from the inflorescences and two new dihydroxysterols have been isolated from the tubers. (Cambie,R.C.and Ash,J. 1994. Fijian Medicinal Plants.)

We currently have 12 herbarium specimens for Colocasia esculenta in our collection. Click on any specimen below to view the herbarium sheet data.