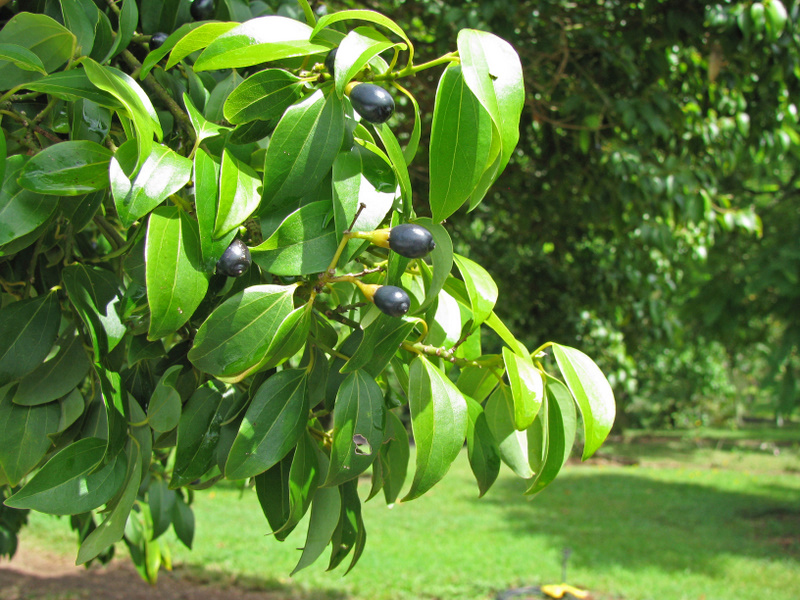 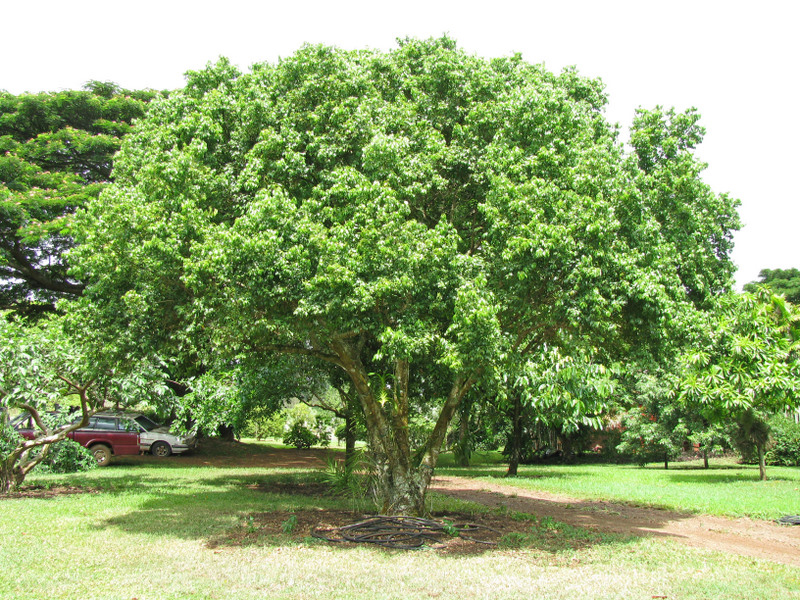 Indonesian Cassia is an evergreen tree growing up to 7 m in height with aromatic bark and angular branches. Cassia is an aromatic bark, similar to cinnamon, but differing in strength and quality. Cassia bark is darker, thicker and coarser, and the corky outer bark is often left on. The outer surface is rough and grayish brown and the inside bark is smoother and reddish-brown. The leaves are glossy green and ovate about 10 cm long. Small yellow flowers hang from long stocks, and bloom in early summer. The fruit is a berry. Cassia buds resemble cloves. They are the dried unripe fruits about 14 mm (1/2 in) long and half as wide.
(Wagner, W.L., D.R. Herbst, and S.H. Sohmer. 1999. Manual of the Flowering Plants of Hawai'i.)
(Bailey, L.H. and E.Z. Bailey. 1976. Hortus 3rd.)
The properties of Cassia and Cassia oil are similar to those of cinnamon. Cassia is a tonic, carminative and stimulant. It is used to treat nausea and flatulence. It is also used alone or in combination to treat diarrhea.
(Lust, John. 1984. The Herb Book.)

Cinnamomum burmanii is native to Southeast Asia and Indonesia. Indonesian Cassia is normally found in West Sumatra in the region of the city of Padang. Cassia grows in hot, wet, tropical climates both wild and commercially.
(Wagner, W.L., D.R. Herbst, and S.H. Sohmer. 1999. Manual of the Flowering Plants of Hawai'i.)
(Bailey, L.H. and E.Z. Bailey. 1976. Hortus 3rd.)
Cinnamomum burmannii is the source of the spice called Cassia, similar to cinnamon yet different. Cassia is the powder obtained from the bark of the tree. At harvest, the bark is stripped off and put to dry in the sun, where it curls into a specific form called "quills."
The quills are dried and cut into thin strips or ground into powder.
Cassia is less costly than cinnamon and is often sold ground as cinnamon.
The difference between Cassia and cinnamon is that cinnamon is used for sweet dishes that are requiring a subtle flavor, while cassia is used for strong, spicy, main dishes such as curries and spicy meat dishes. Dried Cassia leaves are the Indian herb called "tejpat" and incorrectly called "bay leaves". Cassia is also an ingredient in Chinese five-spice.
Cassia buds are often used in stewed fruits, especially apples and with mixed spices for pudding spice, pastry spice and mulling spices.
(Rosengarten F. Jr. 1969. The Book of Spices.)
(Heal, Carolyn and Michael Allsop Michael. 1983. Cooking With Spices.)

We currently have 19 herbarium specimens for Cinnamomum burmanni in our collection. Click on any specimen below to view the herbarium sheet data.