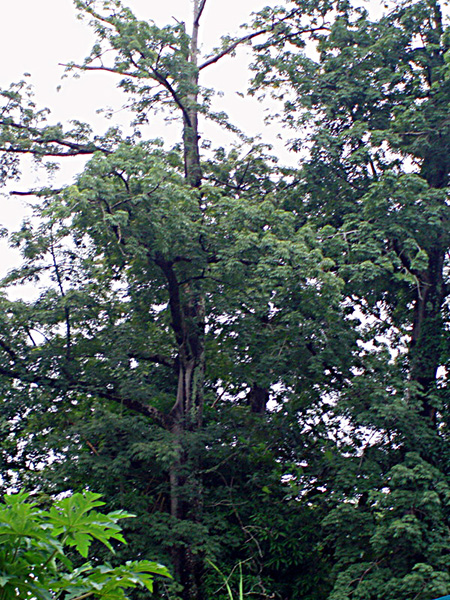 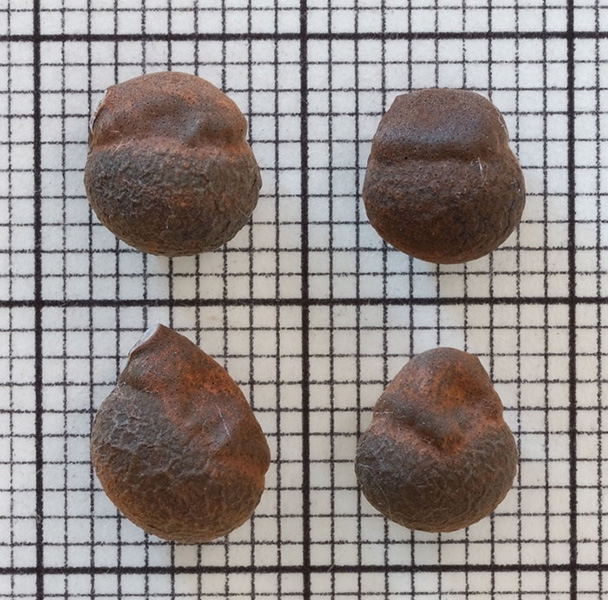 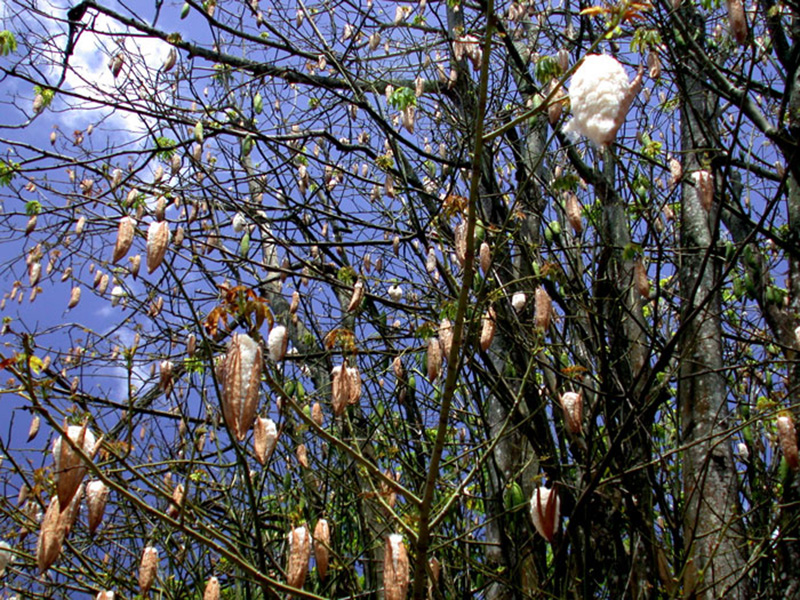 The genus Ceiba contains species that are large trees with most species 5-20 m tall, but the largest species reaching up to 50 m in height. These trees are emergent above the canopy of tropical forests and have large spreading crowns. Ceiba trees possess buttresses at the base of the trunk, which are widely spreading outgrowths that provide additional support and prevent the trees from falling. The trunk and branches of many species are covered in spines. The leaves are palmate compound meaning that the leaf blade is divided into 5-9 leaflets that attach to the leaf stalk at a single point at the base of the leaf. The leaflets of most Ceiba species are 3-7 inches long. Ceiba flowers are produced in clusters and are produced on the branches before the leaves develop. The flowers of some species are inconspicuous (3 cm long) and in others are quite large and showy (12 cm long). The flowers have five petals that are covered internally with long silky hairs. The flowers contain five to fifteen stamens (pollen producing structures) that are arranged in clusters of 2-3 per bundle. The stalks of all the stamens are fused into a column and the petals are also fused to this column. Ceiba fruit are dry at maturity and this long ellipsoid capsule has 5 valves that split open to release the seeds. The internal cavity of the capsule may be densely packed with long silky hairs. Many black-brown seeds (5-10 mm) are contained within each capsule.

Ceiba contains seventeen species including sixteen species that are found in the American tropics and one species, Ceiba pentandra, which has a disjunct distribution between American and African tropical regions. The status of this species is currently unresolved and while it may be native in Africa it may be an early human introduction that has become widely established outside of cultivation. Ceiba species can be found in semi-deciduous tropical forests and the most widespread species, Ceiba pentandra, occurs in seasonally flooded lowland forest in Amazonia and in mesic habitats in Central America.

Many Ceiba species possess flowers are adapted for pollination by pollen- and nectar-feeding bats. The flowers open overnight, when bats are active, and are fragrant. During the flowering season, the flowers of Ceiba grandiflora may produce an average of 0.6 ml of nectar per night. Other Ceiba species produce small quantities of nectar and are considered pollinated by sphingid moths or diurnal butterflies. A single species, Ceiba pubiflora, has upturned flowers and produces copious nectar and may be adapted for pollination by the hummingbirds that frequently visit the flowers. Ceiba fruit float therefore may be dispersed by water currents and the seeds are entangled within long silky hairs that may facilitate wind dispersal.

The species Ceiba pentandra is the well known Kapok or Silk-cotton tree. This species is native to tropical America and may have been introduced into Africa where it is now naturalized with a wide distribution outside of cultivation. The capsules of this species contain long silky hairs surrounding the seeds that allow the fruit to float in water. These hairs are light and water resistant and were historically harvested to stuff pillows, mattresses, car seats, and life jackets. Kapok fibers in these products have now been replaced by synthetic materials that are less flammable.

The large size of many Ceiba species and the high regard for these trees means that Ceiba plants are often left standing when the forest around them is cleared during the conversion of forest for other uses. The fragmentation of forests resulting in the isolation of Ceiba plants may affect visitation by bats, which are the main pollinators of Ceiba flowers. Research on the visitation of Ceiba grandiflora plants by native bat species in Mexico indicates that bat visitation is higher in undisturbed forest than in fragmented forest. Of the three bat species that visit Ceiba grandiflora flowers, only a single species, the Curacaoan long-nosed bat (Leptonycteris curasoae), was observed on isolated trees as frequently as on trees in undisturbed forest. This species is a migratory bat and may fly vast distances (up to 100 km) in a single night which may allow for visitation of trees outside of continuous forest habitat. In this study the number of pollen grains deposited on the stigma of flowers in isolated trees was significantly lower than that of trees in undisturbed forest which may be a result of the reduced visitation to these flowers by bats. Additionally the fruit set of isolated trees was lower that that of trees in undisturbed forest.

We currently have 10 herbarium specimens for Ceiba pentandra in our collection. Click on any specimen below to view the herbarium sheet data.