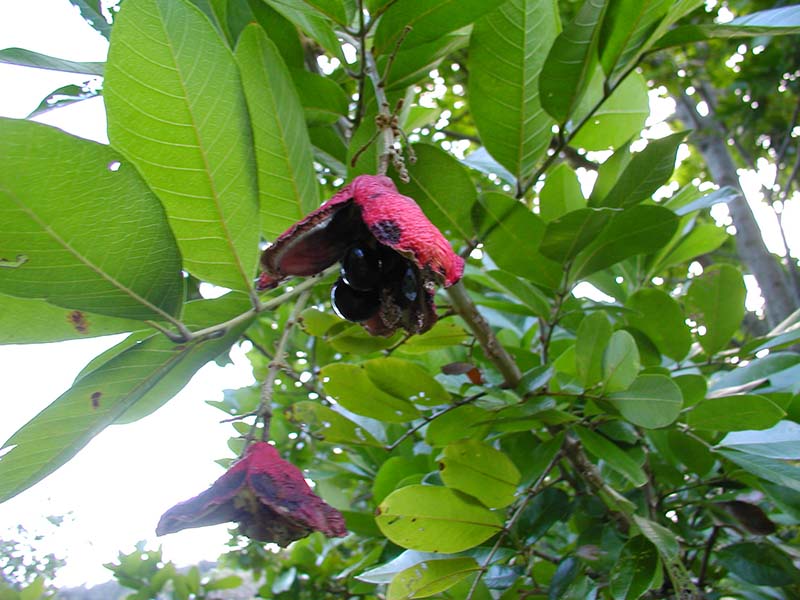 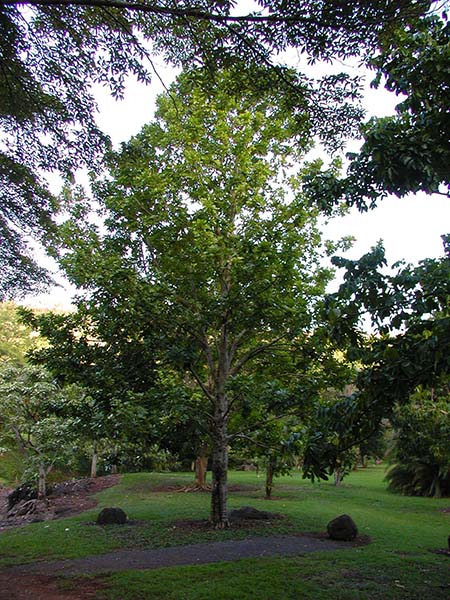 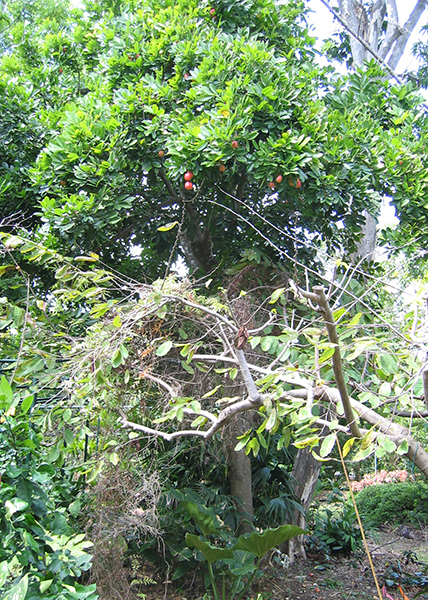 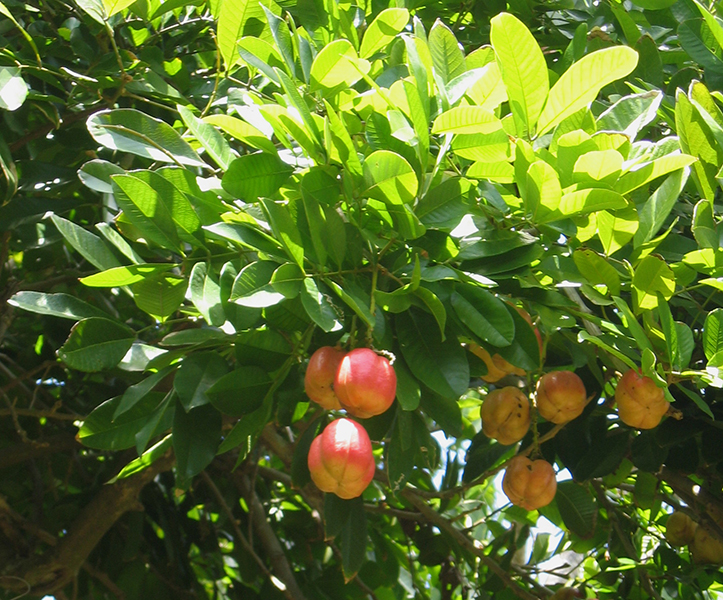 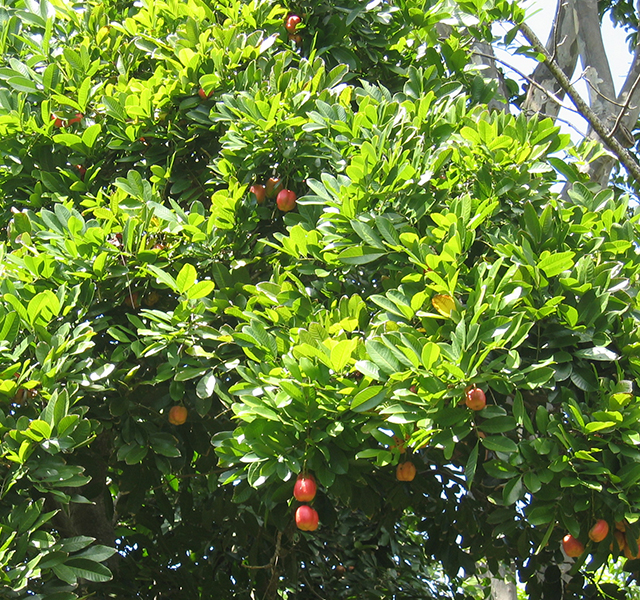 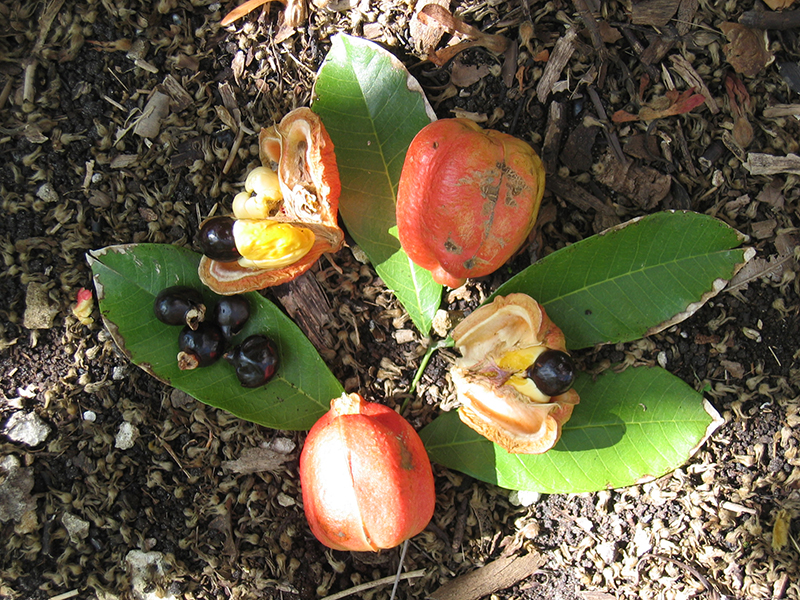 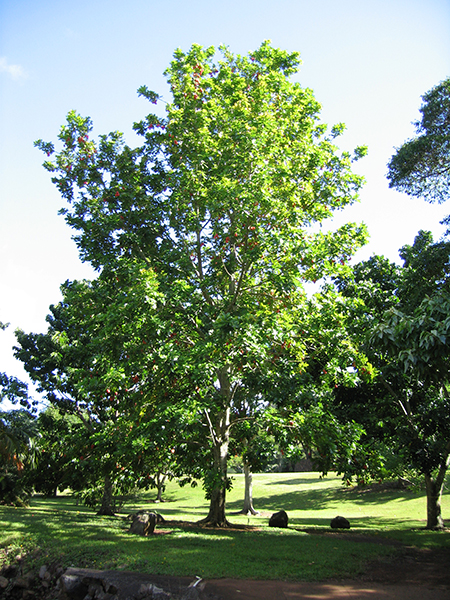 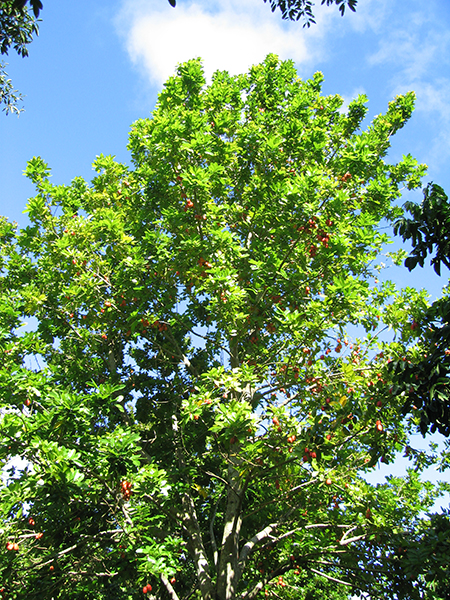 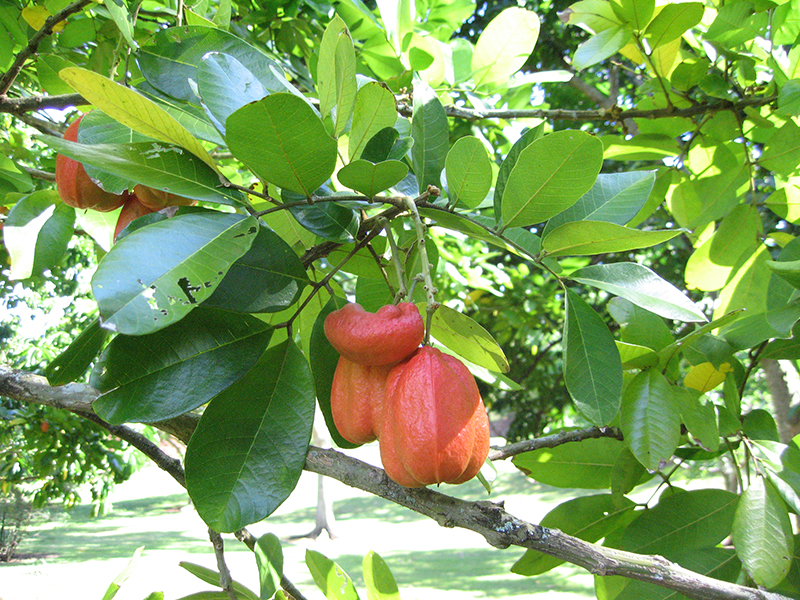 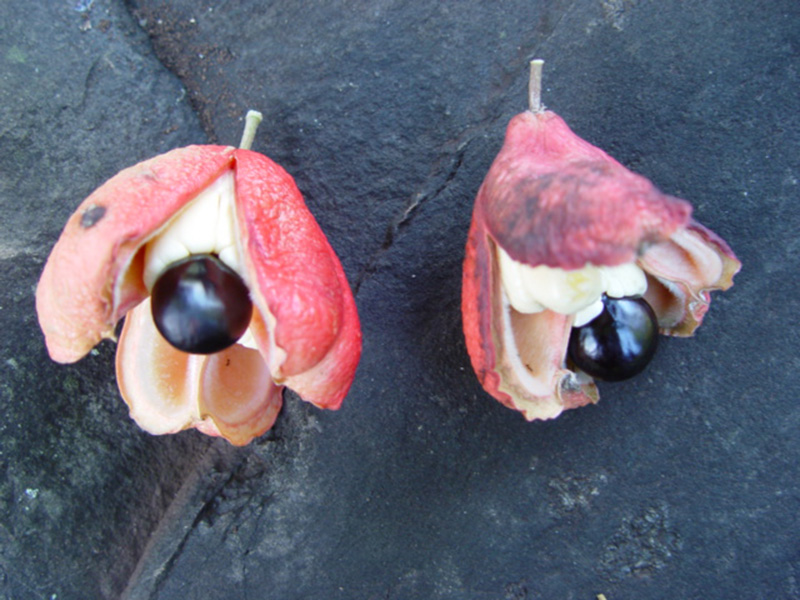 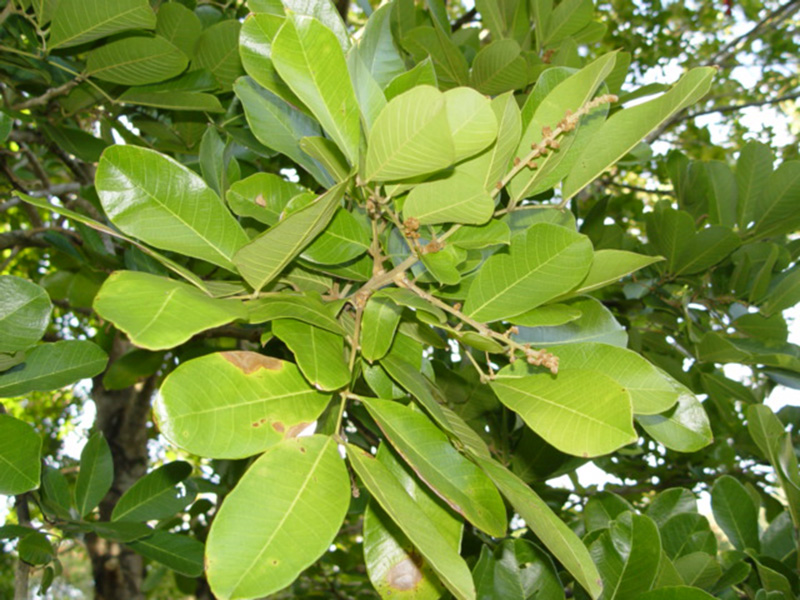 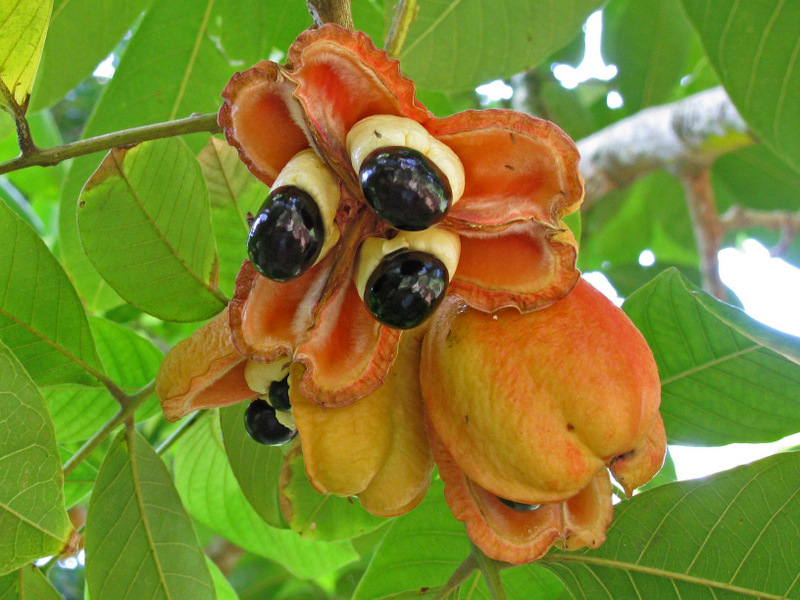 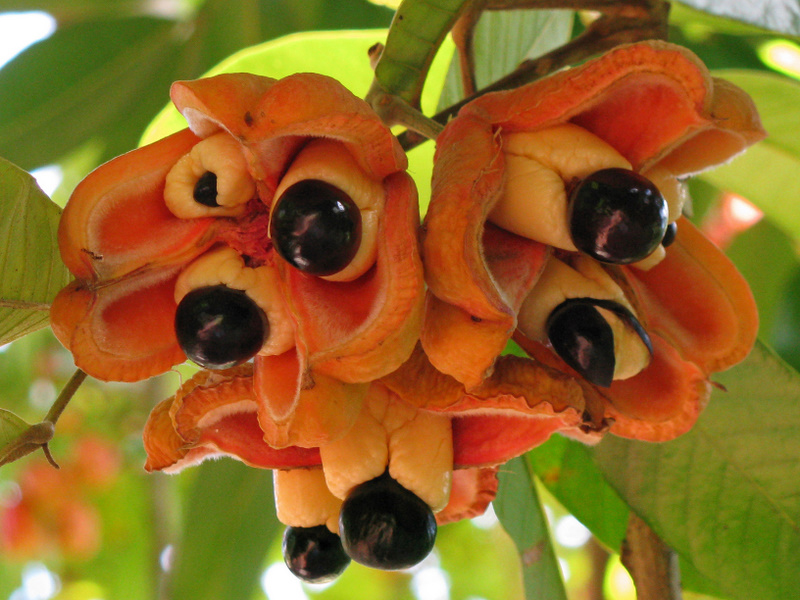 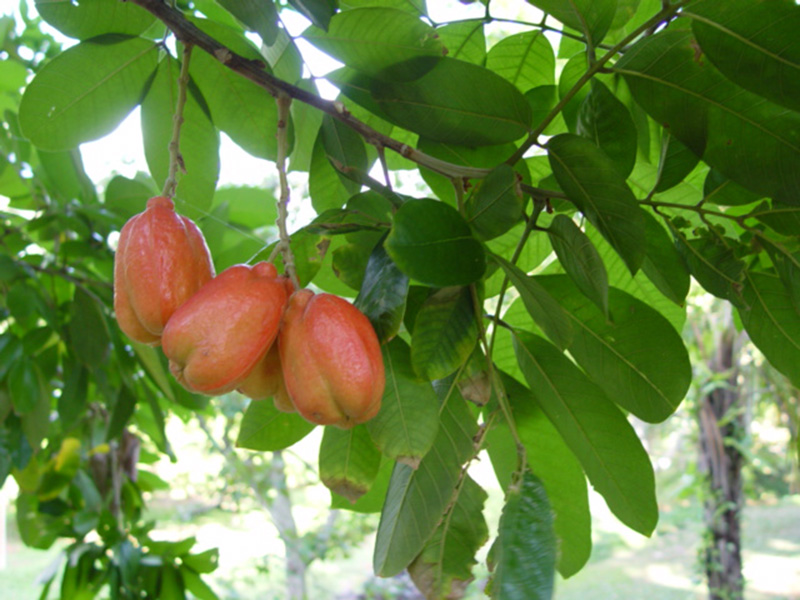 The tree, reaching 33 to 40 ft (10-12 m), is rather hand some, usually with a short trunk to 6 ft ( 1.8 m) in circumference, and a dense crown of spreading branches. Its bark is gray and nearly smooth. The evergreen (rarely deciduous), alternate leaves are compound with 3 to 5 pairs of oblong, obovate-oblong, or elliptic leaflets, 6 to 12 in (15-30 cm) long, rounded at the base, short-pointed at the apex. The leaves are bright-green and glossy on the upper surface, dull and paler and finely hairy on the veins on the under side. Bisexual and male flowers, borne together in simple racemes 3 to 7 in (7.5-17.5 cm) long, are fragrant, 5 petalled, white and hairy. The fruit is a leathery, pear shaped, more or less distinctly 3-lobed capsule 2 3/4 to 4 in (7-10 cm) long. The fruit is yellow, more or less flushed with bright-scarlet. When it is fully mature, it splits open revealing 3 cream-colored, fleshy, glossy arils, crisp, somewhat nutty-flavored, attached to the large, black, nearly round, smooth, hard, shining seeds 3 in number, often 1 or 2 may be aborted. The base of each aril is attached to the inside of the stem-end of the "jacket" by pink or orange-red membranes.
(Morton, J. 1987. Fruits of warm climates.)
In Brazil, repeated small doses of an aqueous extract of the seed has been administered to expel parasites. The treatment is followed by a saline or oily purative.
Cubans blend the ripe arils with sugar and cinnamon and give the mixture as a febrifuge and as a treatment for dysentery.
On the Ivory Coast, the bark is mixed with pungent spices in an ointment applied to relieve pain. The crushed new foliage is applied on the forehead to relieve severe headache. The leaves, crushed with salt, are poulticed on ulcers. The leaf juice is employed as eye drops in ophthalmia and conjunctivitis.
In Colombia, the leaves and bark are considered stomachic. Various preparations are made for treatment of epilepsy and yellow fever.
(Morton, J. 1987. Fruits of warm climates.)
The akee is a favorite in Jamaica but the fleshy arils are poisonous until fully exposed to light. The seeds are always poisonous.
The toxicity of the akee was long misunderstood and believed to reside in the membranes attaching the arils to the jacket, or only in the overripe and decomposing arils. There have been intensive clinical and chemical studies of the akee and its effects since 1940, and it is now known that the unripe arils contain hypoglycin, a-amino-B-(2-methylenecyclopropyl) propionic acid, formerly called hy poglycin A. This toxic property is largely dispelled by light as the jacket opens. When fully ripe, the arils still possess 1/12 of the amount in the unripe. The seeds are always poisonous. They contain hypoglycin and its y-glutamyl derivative, y-L-glutamyl a-amino-B-(2-methylene cyclopropyl) propionic acid, formerly called hypoglycin B. The latter is 1/2 as toxic as the former.
Akee poisoning in humans is evidenced by acute vomiting, sometimes repeated, without diarrhea (called "vomiting sickness" in Jamaica), followed by drowsiness, convulsions, coma and, too often, death. Because of hypoglycaemic effects, administration of sugar solutions have been found helpful. Most cases occur in winter in Jamaica when 30% to 50% of the arils have small, underdeveloped seeds, often not apparent externally. Ingestion of such arils, raw or cooked, is hazardous.
(Morton, J. 1987. Fruits of warm climates.)
In West Africa, the green fruits, which produce lather in water, are used for laundering. Crushed fruits are employed as fish poison. The seeds, because of their oil content, and the jacket because of its potash content, are burned and the ashes used in making soap.
In Cuba an extract of the flowers is appreciated as cologne.
On the Gold Coast, a mixture of the pulverized bark and ground hot peppers is rubbed on the body as a stimulant.
The sapwood (marketed as achin) is white or light greenish-brown. The heartwood is reddish-brown, hard, coarse-grained, durable, immune to termites. It is used locally for construction and pilings and has been recommended for railway sleepers. It is also fashioned into oars, paddles and casks.
(Morton, J. 1987. Fruits of warm climates.)

(Information for this species compiled and recorded by Camelia Cirnaru, NTBG Consultant.)
The akee is indigenous to the forests of the Ivory Coast and Gold Coast of West tropical Africa where it is little eaten but various parts have domestic uses. (Morton, J. 1987. Fruits of warm climates.)
The akee must be allowed to open fully or at least partly before it is detached from the tree. When it has "yawned", the seeds are discarded and the arils, while still fresh and firm, are best parboiled in salted water or milk and then lightly fried in butter. Then they are really delicious. In Jamaica, they are often cooked with codfish, onions and tomatoes. After parboiling, they are added to a stew of beef, salt-pork and scallions, thyme and other seasonings. Sometimes they are curried and eaten with rice. They are served, not only in the home, but also in hotel dining rooms and other restaurants. In Africa, they may be eaten raw or in soup, or after frying in oil.
(Morton, J. 1987. Fruits of warm climates.)

The name "Blighia" has been given in the memory of Captain Bligh that brought the akee in Jamaica in 1793.
In Ghana, the fruiting tree is admired as an ornamental and is planted in villages and along streets for shade. The akee was brought to Jamaica in 1793 by the renowned Captain Bligh to furnish food for the slaves. It was readily adopted and became commonly grown in dooryards and along roadsides and, to some extent, naturalized. The arils still constitute a favorite food of the island and the fruit is featured in a calypso despite the health hazards associated with it. Canned arils are exported to the United Kingdom where they are welcomed by Jamaican immigrants.
The akee was planted also in Trinidad and Haiti and some other islands of the West Indies and the Bahamas and apparently was carried by Jamaican slaves to Panama and the Atlantic Coast of Guatemala and Costa Rica. In 1900 it was outlawed in Trinidad after it had caused some fatalities. There are scattered trees in Surinam, Venezuela, Colombia, Ecuador and Brazil, quite a number maintained as curiosities in southern Florida. Importation has been banned by the United States Food and Drug Administration. (Morton, J. 1987. Fruits of warm climates.)

We currently have 3 herbarium specimens for Blighia sapida in our collection. Click on any specimen below to view the herbarium sheet data.