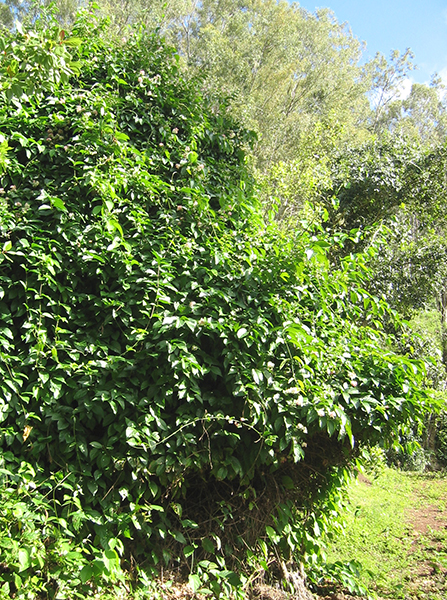 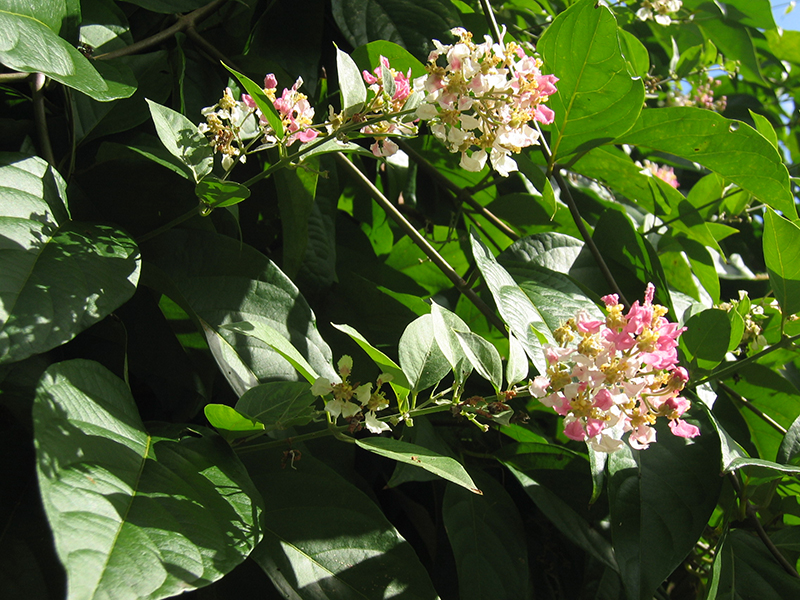 Banisteriopsis caapi is a shrub or extensive liana in tropical forests. The bark is usually chocolate-brown and smooth. Leaves are opposite, oval-shaped, green, marginally entire, 8-18 cm long, 3.5-8 cm wide, upper surface glaborous. The inflorescence is axillary or terminal cymose panicles. Flowers are 12-14 mm in diameter 2.5-3 mm long, 1.5 mm wide with pink petals, 5-7 mm long, 4-5 mm wide and 10 stamens. The fruit is a samara nut, 5 mm long. This liana is maily propagated vegetatively because it rarely blossoms and sets seed. The fan-like shaped seeds are green when fresh, but turn brown with age.
(Schultes, Richard E and Raffauf, Robert F. 1990. The healing forest, medicinal and toxic plants of the Northwest Amazonia.)

When the ayahuasca is used for medical purposes, the shaman is the person to take the drugs, not the patient. Sometimes the patient has already tried conventional medicine. If that fails, they will turn to the shaman for treatment believing that the source of the illness may be magical. During this treatment the shaman will imbibe in the drink and translate the visions he sees while under the influence of the drug. He interprets these visions so he can discern what caused the illness and fight it symbolically. The shaman will sing to the patient about the fight and in the process is freeing him from the evil. This is not the only way the drinks are used medicinally. In some cultures, the shaman and the patient will ingest the drink.
(Bennett, Bradley C. 1992. Hallucinogenic Plants of the Shuar and Related Indigenous Groups in Amazonian Ecuador and Peru.)
(Rivier, L. and J.E. Lindgren. 1972. 'Ayahuasca, the South American Hallucinogenic Drink: an Ethnobotanical and Chemical Investigation.)
The episodes with ayahuasca drink can be pleasant or painful. William Borroughs, Harvard classmate of Richard Evans Schultes, "described ayahuasca as being like kicked in the head by a mule". Other people also report negative experiences with the drink. Lindgren and Rivier described their first account with ayahuasca as being mildly uncomfortable. They experienced some nausea and numbness and tingling, but the bothersome sensations went away at the start of the visions. Then they report with their second experience, a much more painful encounter. "Three months later, a second experience proved to be extremely violent, painful and quite negative.....left one with a feeling of fatigue and frustration and also a lasting fear that it might return". One effect on the body caused by the alkaloids in the B. caapi, is an induced photosensitivity of the eyes. This makes any light, even moonlight or candlelight or car lights irritating to the eyes.
(Bennett, Bradley C. 1992. Hallucinogenic Plants of the Shuar and Related Indigenous Groups in Amazonian Ecuador and Peru.)
(Cockburn, Alexander. 1998. Bill Burroughs and the Biopirates.)
(Rivier, L. and J.E. Lindgren. 1972. 'Ayahuasca,' the South American Hallucinogenic Drink: an Ethnobotanical and Chemical Investigation.)
The word "Ayahuasca" refers to a medicinal and magical drink incorporating two or more distinctive plant species capable of producing profound mental, physical and spiritual effects when brewed together and consumed in a ceremonial setting. One of these plants is always the giant woody liana vine called ayahuasca (Banisteriopsis caapi). The other plant or plants combined with ayahuasca generally contain tryptamine alkaloids, most often dimethyltryptamine. The plants most often used are the leaves of chacruna (Psychotria viridis and other species) and oco yage, also known as chalipanga, chagraponga, and huambisa (Diplopterys cabrerana). I
n traditional rainforest practice, other medicinal or visionary plants are often added to the brew for various purposes, from purely positive healing (blancura) and divination to malevolent black magic (brujeria, magia negra or rojo). This drink is widely employed throughout Amazonian Peru, Ecuador, Colombia, Bolivia, western Brazil, and in portions of the Rio Orinoco basin.
The Ayahuasca brew is considered by the Amazon's tribes as one of the masters "teacher plants". It has been used by Shamans of the Peruvian Andes and Amazon jungle for centuries as an essential part of their traditional medicine and as a way of expanding consciousness.
For the Amazon curanderos (healers) Ayahuasca is known as the "path to knowledge". It allows the spirit access to the deepest realms of its identity and to communicate with the spirit of nature in a holistic way.
(Schultes, Richard E and Raffauf, Robert F. 1990. The healing forest, medicinal and toxic plants of the Northwest Amazonia.)

The word "Ayahuasca" refers to a medicinal and magical drink incorporating two or more distinctive plant species capable of producing profound mental, physical and spiritual effects when brewed together and consumed in a ceremonial setting. In Quechua, the term "aya" means spirit or soul while "huasca' means rope (the soul's rope).
(Schultes, Richard E and Raffauf, Robert F. 1990. The healing forest, medicinal and toxic plants of the Northwest Amazonia.)
The chemical components of Banisteriopsis caapi that cause the hallucinogenic effect are beta-carboline alkaloids found in the bark. More than nine alkaloids have been isolated in Banisteriopsis caapi. The Ayahuasca medicine usually contains both beta-carboline and tryptamine alkaloids. However, some indigenous Amazonian cultures,prepare a ceremonial drink from the ayahuasca vine alone. The beta-carbolines (harmine, harmaline, and tetrahydroharmine) are obtained from the ayahuasca vine (Banisteriopsis caapi). Harmine and harmaline are visionary at near toxic levels, but at modest dosage typically produce mainly tranquility and purgation. Tetrahydroharmine is present in significant levels in ayahuasca. It may be responsible for some of its more profound effects compared to analogue plants such as Syrian rue (Peganum harmala).
The ratio of the harmala alkaloids in ayahuasca appears to vary greatly from one geographical area to another in the Amazon basin. The proportions in which they are present likely account for the varied effects reported by shamans from different "kinds" of ayahuasca even though all are botanically classified as Banisteriopsis caapi. Harmala alkaloids are short term monoamine oxidase inhibitors which render tryptamines orally active by temporarily reducing levels of monoamine oxidase in the body which otherwise rapidly destroys them. The combination of specific serotonin reuptake inhibitors (SSRIs, such as Prozac), and most other antidepressants, with Ayahuasca or other monoamino oxidase inhibitors can cause life support emergencies or death. The principal ayahuasca compounds have a common indole structure which, through several mechanisms, influences certain functions of the central nervous system. The relevant factor is the biochemical similarity of these compounds to the neurotransmitter serotonin. The harmala alkaloids in ayahuasca, primarily harmine and tetrahydroharmine, reversibly inhibit the neuronal enzyme monoamine oxidase. This allows dimethyltryptamine to be active when ingested orally. It also facilitates accumulation of biogenic amines, such as 5-HT, which are normally metabolized by monoamine oxidase enzymes. Dimethyltryptamine is a naturally-occurring biochemical substance secreted by the human body in the pineal gland. It occurs in hundreds of plant species worldwide. It can produce very powerful visionary effects when smoked in its pure form or taken orally in Ayahuasca. It is incorrect, however, to characterize the Ayahuasca experience as merely an oral dimethyltryptamine experience activated by a beta carbolineinhibitor. The holistic processes at work are far more complex and it is unquestionably the ayahuasca vine which fuels the transformative power and profound teaching of the Ayahuasca experience. Tryptamines (specifically N,N-dimethyltryptamine = DMT) are derived most commonly from the leaves of chacruna (Psychotria viridis and P. carthaginensis).
(Kawanishi, K. et al. 1982. Shihunine and Dihydroshihunine From Banisteriopsis caapi.)
(Schultes, Richard E. An Ethnobotanical Perspective on Ayahuasca)
(Schultes, Richard E and Raffauf, Robert F. 1990. The healing forest, medicinal and toxic plants of the Northwest Amazonia.)

We currently have 3 herbarium specimens for Banisteriopsis caapi in our collection. Click on any specimen below to view the herbarium sheet data.