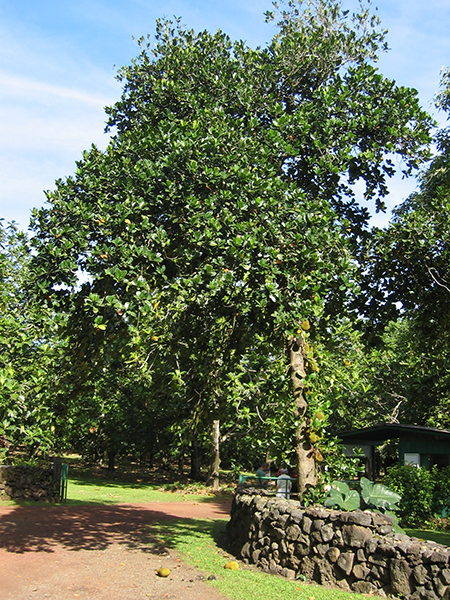 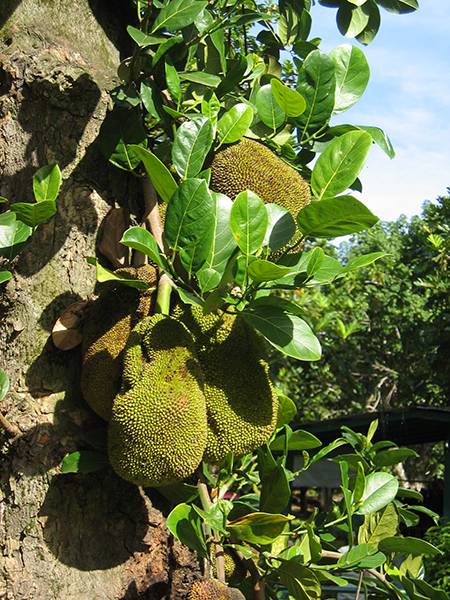 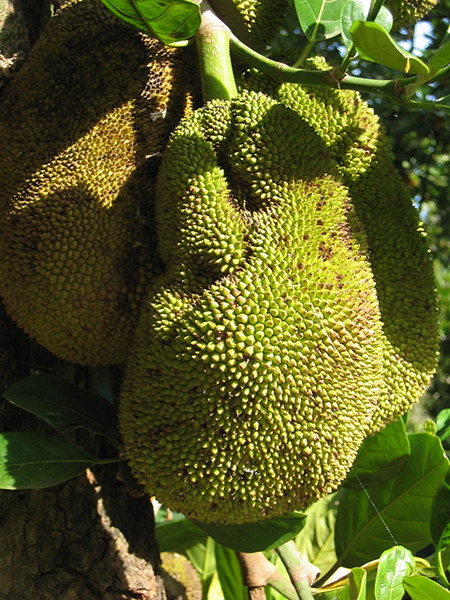 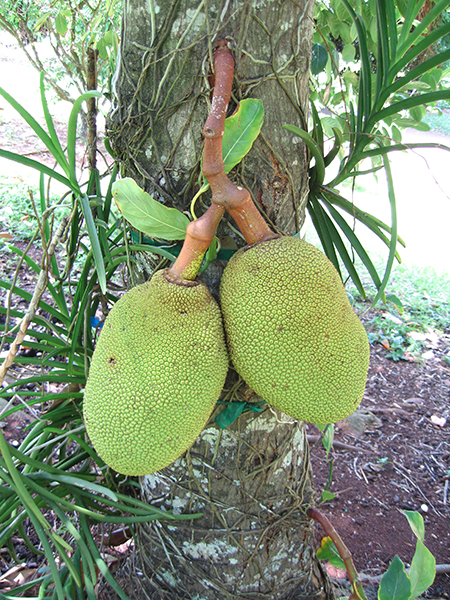 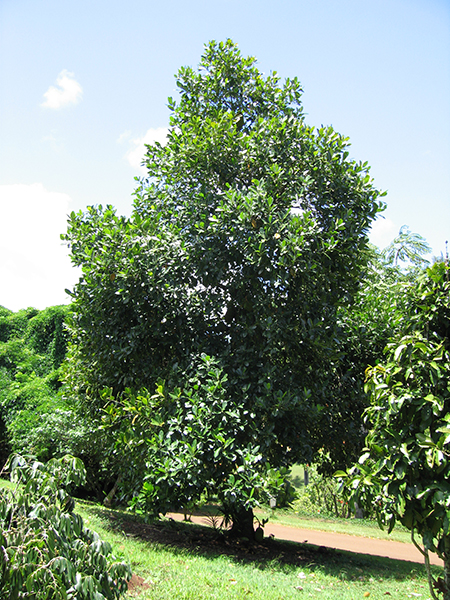 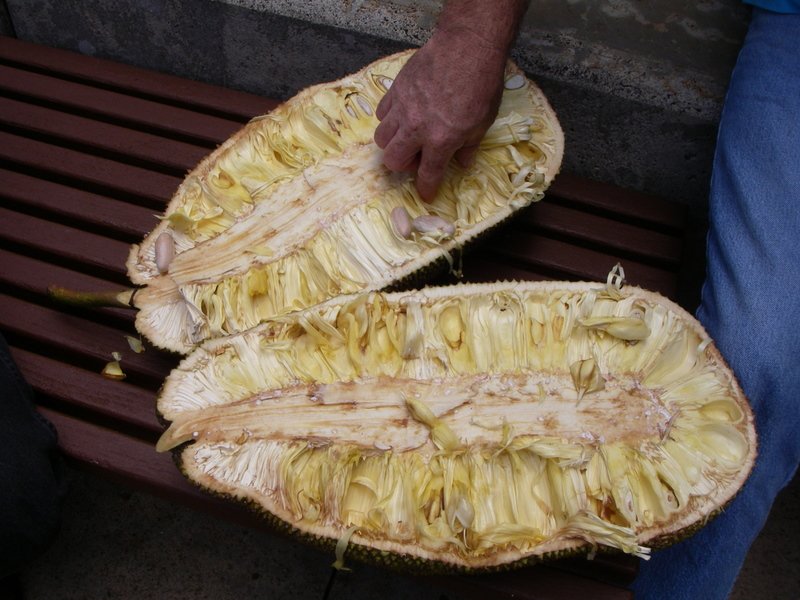 Jackfruit is a handsome tree that can grow up to 9-21 m (70 ft) tall, with evergreen, alternate, glossy and leathery leaves to 22.5 cm (9 in) in length. The tree is monoecious, meaning that male and female flowers appear on the same tree. Tiny male flowers are borne in oblong clusters, while the female flower clusters are rounded. The largest of all trees produces fruits that can reach 20-90 cm (3 ft) in length and weighing 4.5-20 or as much as 50 kg (110 lbs). All parts of the tree contain sticky, white latex. The fruit has a unique compound structure. The exterior of the fruit is green or yellow when ripe and composed of numerous hard, cone-like points attached to a thick and rubbery, pale yellow or whitish wall. The interior consists of large fully developed "bulbs" (called perianths) of yellow, banana-flavored flesh, massed among narrow ribbons of thin, tough undeveloped perianths and a central, pithy core. Each bulb encloses a smooth, oval, light-brown "seed" covered with a thin white membrane. The seed is thick, white and crisp within. One single fruit can have from 100 to 500 seeds inside. There is one other unique and peculiar aspect about the Jackfruit: when fully ripe, the unopened fruit emits a strong disagreeable odor, resembling that of decayed onions, while the pulp of the opened fruit smells of pineapple and banana! (Popenoe, Wilson. 1974. Manual of Tropical and Subtropical Fruits.) (Morton, Julia F. 1987. Fruits of Warm Climates.)

All parts of the plant have medicinal properties. The root is a remedy for skin diseases and asthma and the extract is taken in cases of fever and diarrhea. The ashes of the leaves, burned together with corn and coconut shells are used alone or mixed with coconut oil to heal ulcers. Mixed with vinegar, the latex promotes healing of abscesses, snakebite and glandular swellings. Heated leaves alone are placed on wounds and the bark is made into poultices. The seed starch is given to relieve biliousness and the roasted seeds are regarded as aphrodisiac. In Chinese medicine the pulp and seeds are considered tonic and nutritious. (Morton, Julia F. 1987. Fruits of Warm Climates.)

The wood is beautiful, resembling mahogany and changing with age from orange or yellow to brown or dark-red. It has many qualities: it is termite proof, fairly resistant to fungal and bacterial decay, which makes it superior to teak (its strength is 75 to 80% that of teak) for furniture, construction, turnery and musical instruments. In Bali and Macassar, palaces were built of Jackwood and the limited supply was once reserved for temples in Indochina. Roots of old trees are greatly prized for carving and picture framing. In Malabar, dried branches are used to produce fire in religious ceremonies. A rich yellow dye used for dyeing silk and the cotton robes of Buddhist priests is made from the wood chips boiled with alum. The bark is occasionally made into cordage or cloth. Jackwood is an important timber in Ceylon and India. Timber is also exported to Europe. In some regions, the Jackfruit is fed to cattle. The tree is planted in pastures so the animals can have access to the fallen fruits. The Jackfruit rind is considered a good stock food. Also, cattle and other livestock eat young leaves. In India, the leaves are used as food wrappers in cooking, and they are also fastened together for use as plates. The latex serves as birdlime, alone or mixed with Ficus sap and Macassar oil (from Schleichera trijuga). The heated latex is employed as a household cement for mending chinaware and earthenware, and to caulk boats and holes in buckets. (Morton, Julia F. 1987. Fruits of Warm Climates.) (Information for this species compiled and recorded by Camelia Cirnaru, NTBG Consultant.)

No one really knows the Jackfruit's place of origin but it is believed to be indigenous to the rainforests of the Western Ghats. Today, it is cultivated at low elevations throughout India, Burma, Ceylon, southern China, Malaya, East Indies, Queensland, Mauritius, Kenya, Uganda and former Zanzibar. Although planted in Hawaii since before 1888, it is still rare there as in other Pacific islands, as it is in most of tropical America and the West Indies. It was introduced into Brazil in the mid-19th Century and became more popular there and in Suriname than elsewhere in the New World. (Popenoe, Wilson. 1974. Manual of Tropical and Subtropical Fruits.) (Morton, Julia F. 1987. Fruits of Warm Climates.)

Tender Jackfruit leaves and young male flower are cooked and served as vegetables. Cross sections of dried, unripe Jackfruit are sold in native markets in Thailand. The ripe Jackfruit can be eaten raw or cooked with coconut milk or made into ice cream, chutney, jam, jelly and paste. If the "bulbs" are boiled in milk, the latter when drained and cooled will coagulate and form pleasant, orange colored custard. By a method patented in India, the ripe bulbs may be dried, fried in oil and salted for eating like potato chips. In Malaya, where the odor of the ripe fruit is appreciated, small Jackfruits are cut in half, seeded, chilled, and brought to the table filled with ice cream. The fermented and distilled ripe bulbs produce strong liquor. The seeds may be boiled or roasted and eaten, or boiled and preserved in syrup like chestnuts. They have also been successfully canned in brine, in curry, and tomato sauce. They are often included in curried dishes. Roasted, dried seeds are ground to make a flour which blended with wheat flour is used for baking. Westerners prefer the Jackfruit in the full-grown and unripe stage because it does not yet have the disagreeable odor and cooked is superior in test to breadfruit and plantain. The green fruit is cut into large chunks, which are boiled in salted water until tender than the delicious flesh is separated from the rind and served as a vegetable, including the tasty seeds. The flesh of the unripe fruit has been experimentally canned in brine or with curry. The crisp types of fruit are preferred and is sometimes called "vegetable meat". It may also be dried and kept in tins for a year. (Morton, Julia F. 1987. Fruits of Warm Climates.)

The wood contains the yellow colorant, morin and the colorless cyanomaclurin. In 1955, workers in Bombay reported and a new yellow colorant called artocarpin. And the National Chemical Laboratory in Poona has isolated other six flavonoids. (Morton, Julia F. 1987. Fruits of Warm Climates.)

We currently have 4 herbarium specimens for Artocarpus heterophyllus in our collection. Click on any specimen below to view the herbarium sheet data.