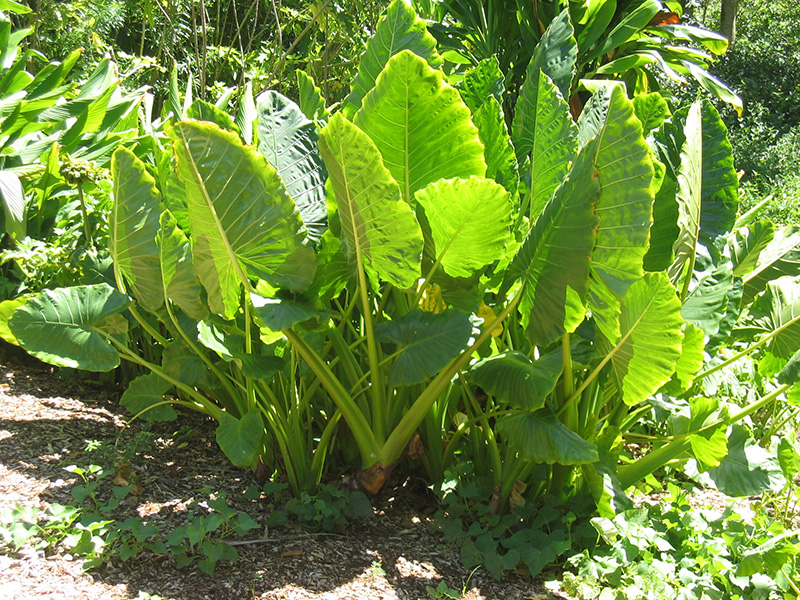 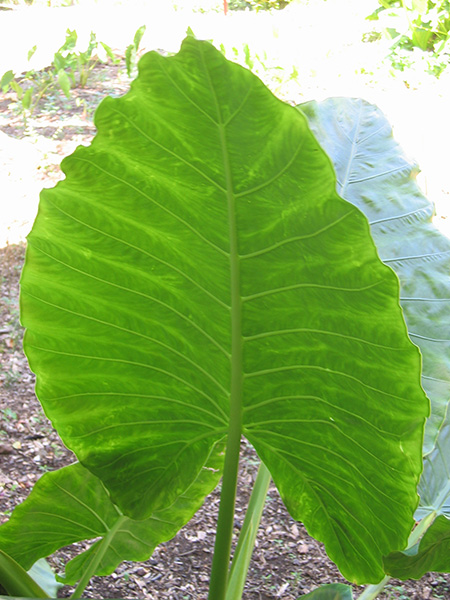 Sometimes called "Elephant's Ear", 'Ape (pronounced ah-pay), is related to and resembles a large Taro plant. In contrast to true Taro, whose leaves point earth-ward, the larger heart-shaped leaves of 'Ape tend to point upward, adding to its height. The shiny green leaves can grow up to 2-4 feet long and 2 feet wide. 'Ape's leaf stems may be green or a whitish in color and reach up to 4 1/2 feet long. The trunk of this plant is ringed and is often 3-4 inches thick in diameter, rising as high as 4-8 feet.
(Wagner,W.L., D.R. Herbst, and S.H. Sohmer. 1990. Manual of the Flowering Plants of Hawaii.)

Medicinally, the juice from freshly cut stems was used on the skin as an antidote after touching itchy or stinging plants such as Ko (Sugar Cane) and Nettle. In the old days, the leaves of 'Ape and of Ti were used to wrap a fevered person for comfort, and because it was said that the bitter sap of 'Ape would frighten away evil or negative spirits.
(Krauss, Beatrice H. 1993. Plants in Hawaiian Culture.)

In old times, 'Ape was used as an ingredient in a dye used to color Ipu (gourds).
Alocasia macrorrhizos is used in modern times as a landscaping plant due to its tropical appearance and ability to provide shade in a garden. 'Ape thrives in a slightly moist, shady site with well composted soil.
(Krauss, Beatrice H. 1993. Plants in Hawaiian Culture.)

This species is not truly wild anywhere and generally occurs near human habitations. Therefore, it seems to be a cultigen selected by humans as a food plant (A. Hay, pers. comm. 2006). It may have originated in southern Asia. 'Ape now grows throughout the Pacific and probably was brought to Hawai'i over 1500 years ago by Polynesian voyagers as corms in their canoes.
(Krauss, Beatrice H. 1993. Plants in Hawaiian Culture.)

Similar to Taro, the underground stem (corm) is edible, and as with Taro, is only safe to eat after lengthy cooking, which breaks down the irritating crystals of calcium oxalate. Uncooked, these crystals can injure internal human mouth and throat tissue. Not a favored food, 'Ape was eaten only in times of famine when other foods were scarce.
(Krauss, Beatrice H. 1993. Plants in Hawaiian Culture.)

The plant is figured in Hawaiian legends as well as in those of Rarotonga.
"'Ai no i ka 'ape he nane'o no ka nuku."
"He who eats 'ape is bound to have his mouth itch."
"He who indulges in some thing harmful will surely reap the result!"
(Krauss, Beatrice H. 1993. Plants in Hawaiian Culture.)

We currently have 22 herbarium specimens for Alocasia macrorrhizos in our collection. Click on any specimen below to view the herbarium sheet data.