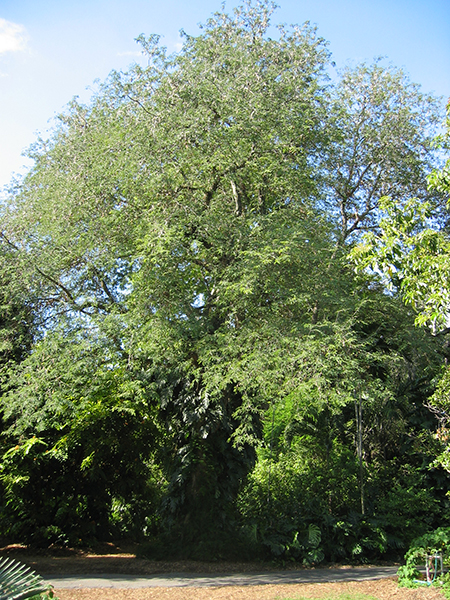 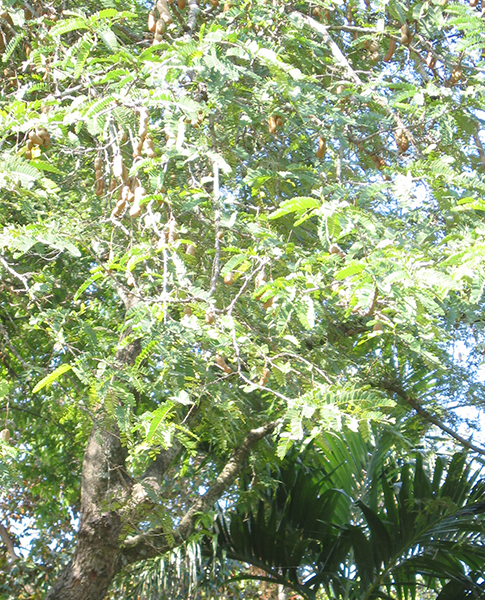 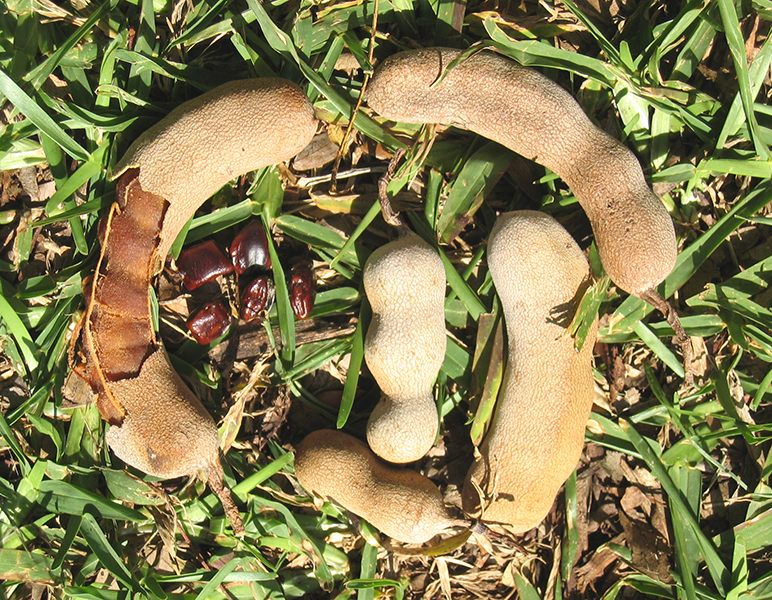 Tamarind is a slow-growing, massive tree that can reach a height of 80 or even 100 ft (24-30 m), spread a crown of 40 ft (12 m) and develop a very large trunk of 25 ft (7.5 m) in circumference. It is a long-lived tree with high resistance to wind dark-gray and rough bark and strong, supple branches that are gracefully drooping at the ends. The mass of bright-green, fine, feathery foliage is composed of pinnate leaves, each having 10 to 20 pairs of oblong leaflets, which fold at night. The leaves are normally evergreen but may shed briefly in very dry areas during the hot season. Inconspicuous, inch-wide flowers, borne in small racemes, are 5-petalled (2 reduced to bristles), yellow with orange or red streaks. The flower buds are distinctly pink due to the outer color of the 4 sepals, which are shed when the flower opens. The fruits are curved and bulged pods, borne in great abundance along the new branches. The pods are cinnamon-brown or grayish-brown and tender-skinned with green, highly acid flesh and soft, whitish and under-developed seeds. As they mature, the pods fill out and the juicy, acidulous pulp turns brown or reddish-brown. Than, the skin becomes a brittle, easily cracked shell and the pulp dehydrates naturally to a sticky paste enclosed by a few coarse strands of fiber. The seeds are hard, glossy-brown and each is enclosed in a parchment like membrane. (Morton, J. 1987. Fruits of Warm Climates.)

In native practice, the pulp is applied on inflammations, used in a gargle for sore throat and, mixed with salt, as a liniment for rheumatism. It is administered to alleviate sunstroke, digitalis poisoning, and alcoholic intoxication. The pulp is said to aid the restoration of sensation in cases of paralysis. Tamarind leaves and flowers, dried or boiled, are used as poultices for swollen joints, sprains and boils. Lotions and extracts made from them are used in treating conjunctivitis, dysentery, jaundice, hemorrhoids and various other ailments, because of their antiseptics and vermifuges properties. The fruit shells are burned and reduced to an alkaline ash, which enters into medicinal formulas. The bark of the tree is regarded as an effective astringent, tonic and febrifuge. Fried with salt and pulverized to an ash, it is given as a remedy for indigestion and colic. A decoction is used in cases of gingivitis and asthma and eye inflammations. Lotions and poultices made from the bark are applied on open sores and caterpillar rashes. The powdered seeds and seeds coat are astringent and made into a paste for drawing boils and, with or without cumin seeds and palm sugar, are prescribed for chronic diarrhea and dysentery. An infusion of the roots is believed to have curative value in chest complaints and is an ingredient in prescriptions for leprosy. Tamarind preparations are universally recognized as refrigerants in fevers and as laxatives and carminatives. Alone, or in combination with lime juice, honey, milk, dates, spices or camphor, the pulp is considered effective as a digestive, even for elephants, and as a remedy for bile disorders and for the treatment of scorbutic disease. In Colombia, an ointment made of tamarind pulp, butter, and other ingredients is used to rid domestic animals of vermin. (Morton, J. 1987. Fruits of Warm Climates.)

Tamarind tree has many uses. The sapwood is pale-yellow and the heartwood is dark purplish-brown, very hard, heavy, strong, durable and insect-resistant. It bends well and takes a good polish and, while hard to work, it is highly prized for furniture, paneling, wheels, axles, gears for mills, ploughs, planking for sides of boats, wells, mallets, knife and tool handles, rice pounders, mortars and pestles. It has at times been sold as "Madeira mahogany". The wood is valued for fuel, for it gives off an intense heat. Young stems and also slender roots of the Tamarind tree are fashioned into walking sticks. The twigs and the bark are sometimes used as "chew sticks". The galls on the young branches are used in tanning. The leaves are eaten by cattle and goats, and furnish fodder for silkworms in India and West Africa. The fine silk from the worms fed with Tamarind is considered superior for embroidery. Tamarind leaves and flowers are used for dyeing. A yellow dye derived from the leaves colors the wool red and turns the indigo-dyed silk to green. The foliage is also used as common mulch for tobacco plantings. The powder made from Tamarind kernels is commonly used for dressing homemade blankets. Tamarind seeds yield amber oil useful as an illuminant and as a varnish especially preferred for painting dolls and idols. (Morton, J. 1987. Fruits of Warm Climates.) (Information for this species compiled and recorded by Camelia Cirnaru, NTBG Consultant.)

Tamarind is native to tropical Africa, where it grows wild throughout the Sudan. It has been so long ago introduced into India that it has often been reported as indigenous there also. (Morton, J. 1987. Fruits of Warm Climates.)

Tamarind is used as food in various ways. The tender, immature, very sour pods are cooked as seasoning with rice, fish and meats in India. In Bahamas, the fully-grown, but still unripe fruits, called "swells" are roasted in coals until they burst and the skin is then peeled back and the sizzling pulp dipped in wood ashes and eaten. The fully ripe, fresh fruit is relished out-of-hand by children and adults, alike. The pulp is made into a variety of products. It is an important ingredient in chutneys, curries and sauces, including some brands of Worcestershire and barbecue sauce, and in special Indian seafood pickle called "tamarind fish". Sugared tamarind pulp is often prepared as a confection. This sweetmeat is commonly found on the market in Jamaica, Cuba and the Dominican Republic. In Panama, the pulp may be sold in cornhusks, palm leaf fiber baskets, or in plastic bags. Tamarind beverage, made from shelled fruits has long been a popular drink in the Tropics and it is now bottled in carbonated form in Guatemala, Mexico, Puerto Rico and elsewhere. Tamarind syrup is bottled for domestic use and export in Puerto Rico. In Mayaguez, street vendors sell cones of shaved ice saturated with Tamarind syrup. The strained pulp, much like apple butter in appearance, can be stored under refrigeration for use in cold drinks or as a sauce for meats and poultry, plain cakes or puddings. Tamarind pulp can be made into a tart jelly, and Tamarind jam is canned commercially in Costa Rica. Tamarind sherbet and ice cream are popular and refreshing. In making fruit preserves, Tamarind is sometimes combined with guava, papaya or banana. Sometimes the fruit is made into wine. Young leaves and very young seedlings and flowers are cooked and eaten as greens and in curries in India. In Zimbabwe, the leaves are added to soup and the flowers are an ingredient in salads. The oil extracted from the seeds is said to be palatable and have culinary quality. Tamarind seeds have been used in a limited way as emergency food. They are roasted, soaked to remove the seedcoat, then boiled or fried, or ground to a flour or starch. Roasted seeds are ground and used as a substitute for coffee. In Thailand they are sold for this purpose. (Morton, J. 1987. Fruits of Warm Climates.)

The flowers of Tamarind are considered a good source of nectar for honeybees in South India. The honey is golden-yellow and slightly acid in flavor. The Tamarind tree is a host for the lac insect, Kerria lacca that deposits a resin on the twigs. The lac may be harvested and sold as stick-lac for the production of lacquers and varnish. (Morton, J. 1987. Fruits of Warm Climates.)

Some African tribes venerate the Tamarind tree as sacred. To certain Burmese people, the tree represents the dwelling-place of the God of rain. In Malaya there is the believe that Tamarind makes one wise, so a little Tamarind with coconut milk is placed in the mouth of an infant at birth. Also, the elephants are given the bark and the fruit to make them wise. Few plants will survive beneath a tamarind tree and because of that there is a superstition that it is harmful to sleep or tie a horse beneath a Tamarind tree, probably because of the corrosive effect that fallen leaves have on fabrics in damp weather. (Morton, J. 1987. Fruits of Warm Climates.)

We currently have 11 herbarium specimens for Tamarindus indica in our collection. Click on any specimen below to view the herbarium sheet data.