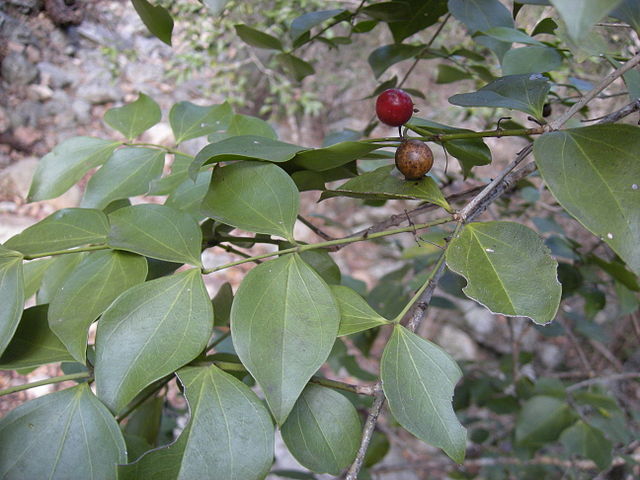 Strychnos sp. is a common vine (liana) with a rough, brown bark from the Amazon rainforest. The liana is advancing with the help of hooks at the young tops of the plant. The very short leaves stand in pairs attached to the round, rusty-brown hairy twigs. The leaves are up to 3" long and leathery ovalate. The upside of the leave is shiny. The flowers are white and aromatic. The fruit is a yellow berry.

In Suriname's traditional medicine, duru duru is used as an aphrodisiac. Curare has medicinal applications also, the alkaloÃ¯d tubocurarine is extracted and when given in small quantities (together with general anesthesia) relaxes the muscle tissue and lessens the possibility of anesthesia-induced complications. It is also used for acute arthritis and muscle trauma.

The poison from the roots and stem of this plant is the main ingredient in pot curare or calabash curare. Many plant materials are used in addition to the strychnos to complete the poison curare, such as Chondrodendron tomentosum and Spigelia anthelmia. Curare inhibits the action of the enzyme cholinesterase, resulting in muscular and respiratory paralysis. Spigelia anthelmia, raises the heartbeat to a very rapid beat until it stop due to this. Strychnine, the main alkaloid component of the seeds, acts as a bitter substance, which increases the flow of gastric juices. Strychnine is rapidly absorbed into the intestines and exerts its characteristic effects on the central nervous system. Such effects as deepened respiration and decreased stroke volume of the heart through excitation of the vagal center are observed from contact of the alkaloid. The action of strychnine also raises epinephrine levels and thus increases systemic blood pressure by direct stimulation of the sympathetic nervous system on the smooth muscle of the arterioles. This action can be of great value in reducing cardiac failure. The most direct symptoms caused by strychnine are violent convulsions due to the simultaneous stimulation of the motor or sensory ganglia of the spinal cord. (Encyclopedia Britanica. 1999. Strychnine.) (Encyclopedia Encarta. 2001. Strychnine.)

Since ancient times Indians have been preparing a black resinous liquid from the bark of strychnos, which we call curare now. The poison is extremely strong but only if it comes in contact with blood. The Amerindians use the curare as an arrow poison. When introduced by penetration of the arrow, curare paralyzes the muscle fibers of the heart and the motor nerve endings in voluntary muscles. This causes usually the death of the victim. (See also Chondrodendron tomentosum- Curare) (Encyclopedia Britanica. 1999. Strychnine.) (Encyclopedia Encarta. 2001. Strychnine.) (Information for this species compiled and recorded by Camelia Cirnaru, NTBG Consultant.)

In 1818, the French pharmacists Pierre-Joseph Pelletier and Joseph-Bienaim Caventou, having examined the Strychnos fruit, identified a new alkaloid of concentration 2-4%. This new alkaloid was strychnine, which was later applied in medicine as a stimulator of the nervous system (including the sensory organs) and as a reliable anaesthetic. (Encyclopedia Britanica. 1999. Strychnine.) (Encyclopedia Encarta. 2001. Strychnine.) Strychnine was the first alkaloid to be identified in plants of the genus Strychnos. Strychnine is a poisonous alkaloid, C21H22N2O2, obtained in colorless or white rhombic crystals. These have a bitter taste and melt at around 29 degrees C. Strychnine is slightly soluble in water, but is more soluble in alcohol and is released from its salts by alkalis. Many of the commercial alkaloids are found in the genus Strychnos. (Encyclopedia Britanica. 1999. Strychnine.) (Encyclopedia Encarta. 2001. Strychnine.)

We currently have 1 herbarium specimens for Strychnos sp. in our collection. Click on any specimen below to view the herbarium sheet data.