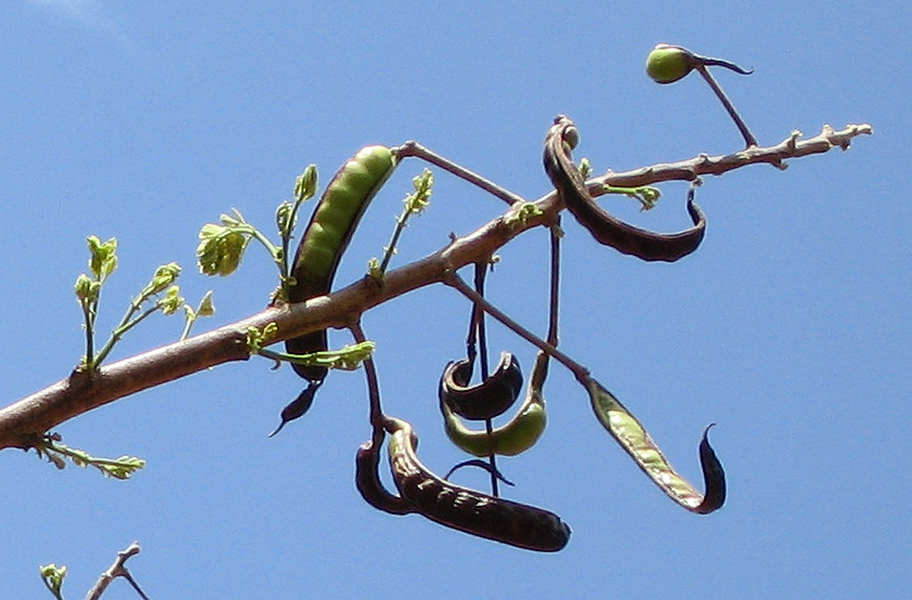 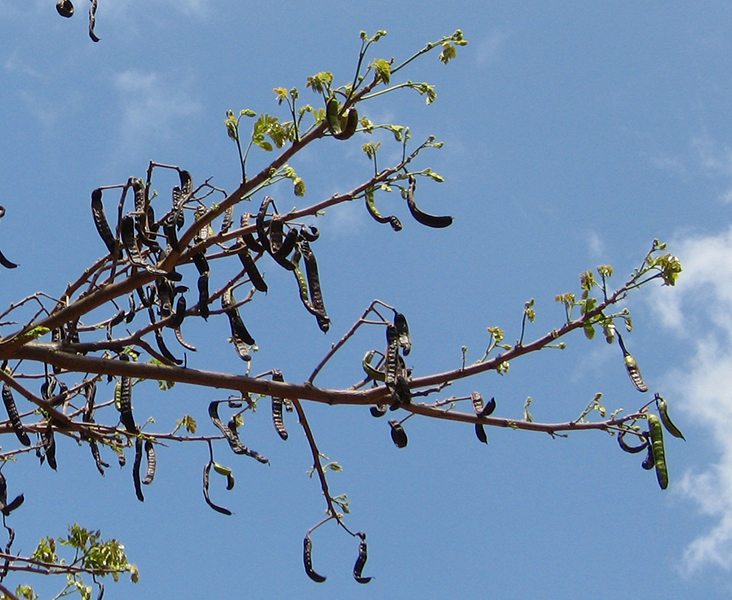 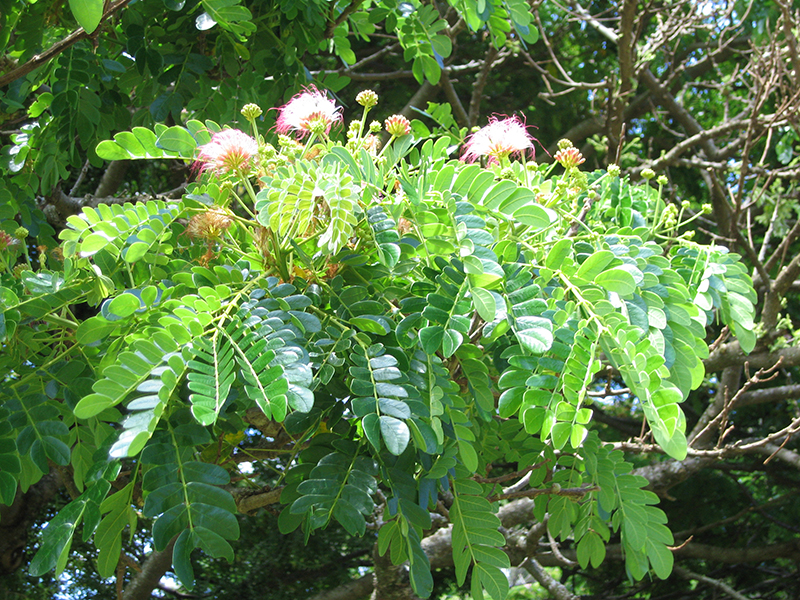 Samanea saman is a large tropical tree growing as much as 60 m tall, with rough wrinkled bark and developing a symmetrical broad umbrella shaped crown about 80 m wide, making this species a beautiful choice for a shade tree. The evergreen leaves are alternate, bipinnate, 25â€“40 cm long, with 2â€“6 pairs of pinnae, each of which bears 6â€“16 paired stalkless leaflets, with a glandular dot between each pair. Flowers are produced near the end of twigs in clusters on a green hairy stalk with many small tubular pinkish-green flowers. The fruits are flat seed pods, black, 20â€“30 cm long, containing several oblong reddish-brown seeds about one cm long. (Duke, James A. 1983. Handbook of Energy Crops.)

The root decoction is used in hot baths for stomach cancer in Venezuela. Rain Tree is a traditional remedy for colds, diarrhea, headache, intestinal ailments and stomachache. The leaf infusion is used as a laxative In the West Indies, seeds are chewed for sore throat. The alchoolic extract of the leaves inhibits Mycobacterium tuberculosis. In Colombia, the fruit decoction is used as a sedative. (Hartwell, J.L. 1967-1971. Plants Used Against Cancer.) (Duke, J.A. and Wain, K.K. 1981. Medicinal Plants of the World.) (Perry, L.M. 1980. Medicinal Plants of East and Southeast Asia.) (Garcia-Barriga, H. 1975. Flora Medicinal de Colombia.) (Ayensu, E.S. 1981. Medicinal Plants of the West Indies.)

One of the most important uses in Latin America is as a shade tree, especially in parks, pastures, and roadsides, because this species' leaflets fold together at night and in wet weather, allowing the rain to fall through, hence the grass can grow right up to the trunk. Axonopus compressus, a tropical forage grass, grown under Samanea demonstrated improved growth, nutritive quality, protein content, and yield, benefit attributed to the nitrogen made available in the soil by excretion or decomposition of the leguminous nodules. (Allen, O.N. and Allen, E.K. 1981. The Leguminosae. University of Wisconsin Press: p. 812 p) In Malagasy, it is grown as shade tree for cacao, coffee, patchouli, and vanilla. In Indonesia, it is recommended for nutmeg but not for tea. In Uganda, it is considered good for coffee, bad for tea. Samanea produces copious pods with a sweet pulp, attractive to children and animals alike. The long black pods and the leaves are rich in tannins and they are relished for livestock fodder. The wood is soft, lightweight and takes a beautiful finish but is often cross-grained and difficult to work. It is used for furniture, general construction, and interior trim, for boxes and crates, paneling, plywood, and veneer. In Central American oxcart wheels are made from cross sections of trunks. In Hawaii it is used for boat building where it is also famous for making "monkeypod" bowls. Shavings from the wood are used for making hats in the Philippines. (Duke, James A. 1983. Handbook of Energy Crops.) (Information for this species compiled and recorded by Camelia Cirnaru, NTBG Consultant.)

The Rain Tree is native from the Yucatan Peninsula and Guatemala to Peru, Bolivia, and Brazil. However, it is widely planted and naturalized and planted in continental tropical America from Mexico throughout the West Indies and in Old World tropics. It is also grown in southern Florida. (Little, E.L., Jr., and Wadsworth, F.H. 1964. Common Trees of Puerto Rico and the Virgin Islands.)

Like most other trees from the Mimosaceae (Fabaceae) family, this is an important honey plant. Rain Tree is also one of the hosts for the lac insect, however, it produces a poor quality lac, reddish and rather brittle (Duke, James A. 1983. Handbook of Energy Crops.)

Simon Bolivar is said to have encamped his entire liberation army under the "Saman de Guerra" near Maracay, Venezuela. (Duke, James A. 1983. Handbook of Energy Crops.)

We currently have 12 herbarium specimens for Samanea saman in our collection. Click on any specimen below to view the herbarium sheet data.