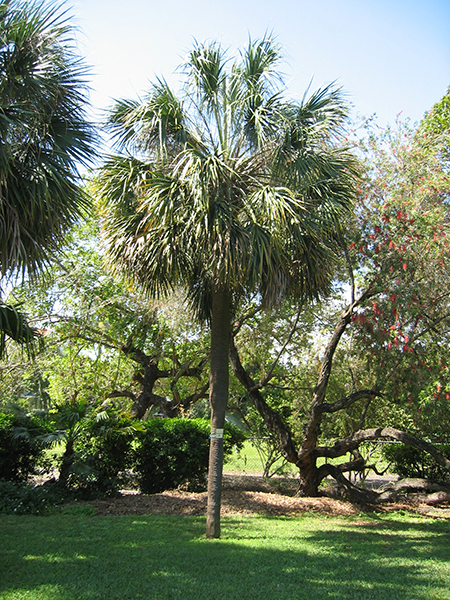 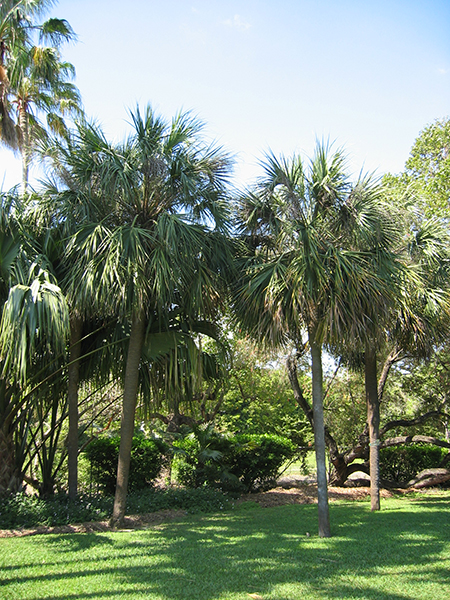 Palmetto is an evergreen palm tree that can reach 20 m in height. The erect, unbranched trunk has grayish - brownish bark with distinctive pineapple-like markings where the old leaf stalks were attached. The leaves are green, stiff, fanlike are palmately compound, spreading in all directions as they emerge from the top of the trunk. The fans, often wider than they are long (2-3 m wide), contain several long and pointed leaflets with prominent midribs. Abundant, small, fragrant, white flowers are borne on large branched clusters during June and July. The berry-like fruits are black in color, small and shiny. Each fruit contains one seed.
(Bailey, L.H. & E.Z. Bailey 1976. Hortus Third: A Concise Dictionary of Plants Cultivated in the United States and Canada.)
(Small, J.K. 1933. Manual of Southeastern Flora.)

Sabal Palmetto is used as analgesic, febrifuge and dietary aid. Native Americans use the berries or the seeds of Palmetto to lower fever, to treat headache and grass sickness and for weight loss.
(Sturtevant, William. 1954. The Mikasuki Seminole: Medical Beliefs and Practices.)

For Native Americans the plants provided fiber and wood used to construct houses, make food paddles, drying frames for animal skins, potato drying mats, fish drags, fish poison, ballsticks, arrows and hunting dance staffs. Most Seminole homes were built from the cabbage palm. Logs would were used as poles for the framework of huts that were thatched with the fan-shaped leaves of Palmetto. Split logs were used for flooring. Immature fronds were bleached in the sun, cut into strips, and plaited to make long
strips, which were used for lashing or sewn together to make baskets. The stiff midribs of the leaves were sometimes used to construct ball sticks or racquets. Palmetto-thatched houses may still be found in Houma country in Louisiana.
(Moerman, D.E. 1998. Native American Ethnobotany.)
(Neill, W.T. 1956. The Story of Florida's Seminole Indians.)

Palmetto is native to United States and occurs near the coast along beaches, sandy bays and estuary shores in all the southeastern states. This palm is also native to Cuba and the Bahamas.
(Small, J.K. 1933. Manual of Southeastern Flora.)

The Seminole and other Native American peoples in the southeastern United States used Cabbage Palmetto for a wide variety of purposes. The white, crisp palm hearts were eaten either raw or cooked by boiling or steaming. The leaf buds are purported to taste like cabbage. The palm fruits, which ripen in the fall, are small and mostly seeds, but they are sweet with a slight bitter aftertaste. However, it should be noticed that both of these food uses, the heart and the buds, result in the death of the plant.
(Moerman, D.E. 1998. Native American Ethnobotany.)
(Neill, W.T. 1956. The Story of Florida's Seminole Indians.)

Cabbage Palmetto flowers are insect pollinated. Fruits, which ripen in the late fall are eaten by ringed-neck gulls, cardinals, blue jays, crows, mockingbirds, warblers, pileated, red-bellied woodpeckers and squirrels. Palmetto fruits provide a quarter of the diet of raccoons and robins in the Southeast.
(Martin, A.C., H.S. Zim & A.L. Nelson. 1951. American Wildlife and Plants: A guide to Wildlife Food Habits.)
Cabbage Palm is the state tree of Florida and is displayed on the state flag of South Carolina whose nickname is the "Palmetto State".
(Floridata Plant Encyclopedia. 2004.)

We currently have 1 herbarium specimens for Sabal palmetto in our collection. Click on any specimen below to view the herbarium sheet data.