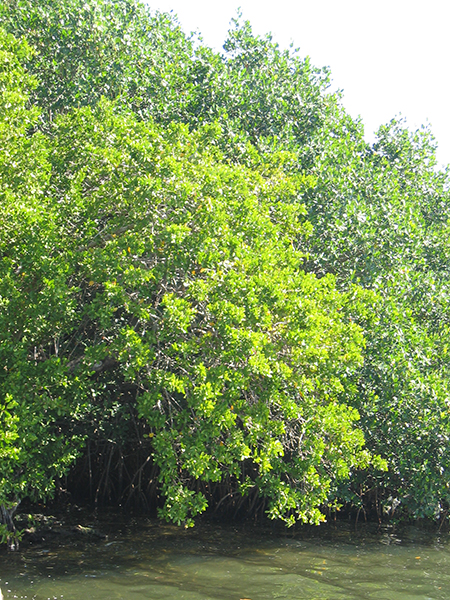 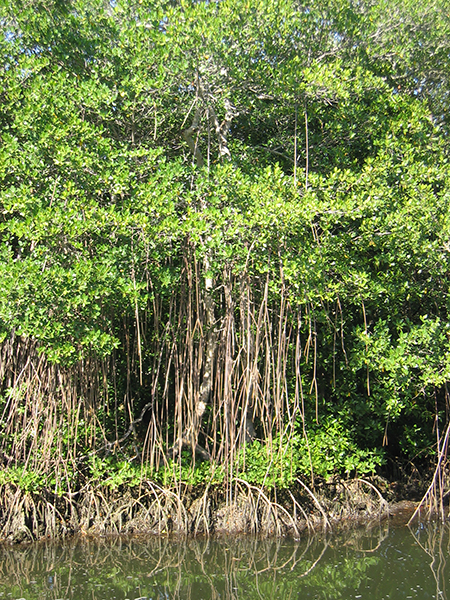 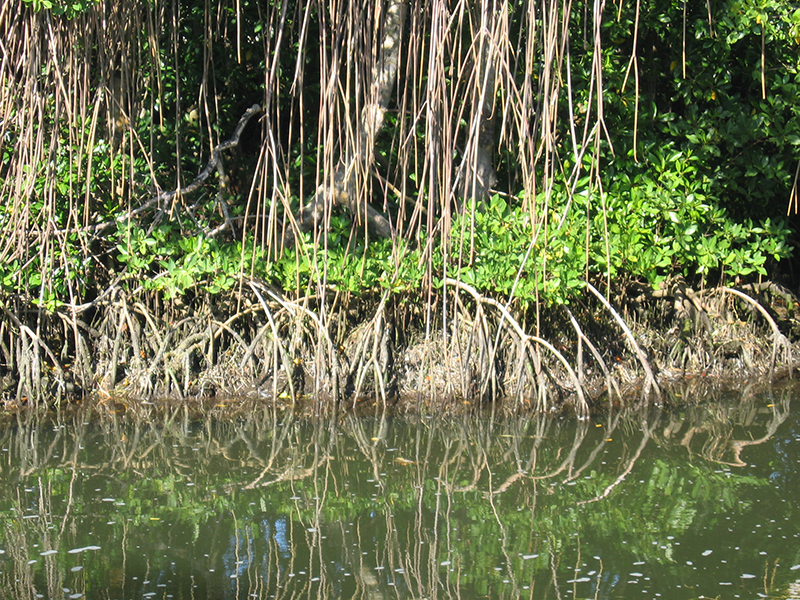 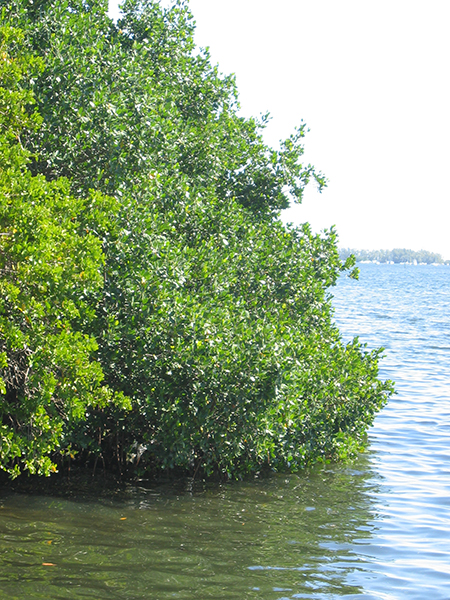 The Red Mangrove is generally a tall shrub or small tree 3 to 6 meters in height, but can grow up to 25 m under optimal conditions. It is characterized by its numerous above ground roots called "prop roots". The thick, gray to gray-brown bark is ridged and scaly. The persistent leaves are oppositely arranged, 5 to 15 cm long and 3.5 to 7 cm wide. They are elliptical in shape, dark green on top, and paler below. The leaf margins are smooth and the tip is somewhat flattened. The flowers are a pale yellow and are formed in loose clusters. Each flower contains both male and female reproductive structures and has 4 petals about 7 mm long. The fruit is ovoid and contains a single seed that germinates on the parent tree. What appears to be elongated brown and green fruits, are actually seedlings (up to 25 cm long) with an already well-develped root or hypocotyl. When the seedling falls this root can lodge in the soil or mud and the top begins to grow immediately, or it can float in the seawater for many months and become established far away. This is a unique plant adaptation to the coastal environment.

(Garcia-Barriga, H. 1975. Flora medicinal de Colombia. Botanica Medica.)
(Duke, J.A. and Wain, K.K. 1981. Medicinal Plants of the World.)
(Morton, J.F. 1981. Atlas of Medicinal Plants of Middle America, Bahamas to Yucatan.)
(Steele, O. C. 2006. Cultural Importance of Mangroves in the SW Pacific.
PhD Dissertation. University of Hawaii).
The wood of Red Mangrove is an importance source of fuel and charcoal in many developing areas of the world. The bark of Rhizophora mangle contains large quantities of tannins that are used for tanning leather. Timber of the red mangrove is used for construction, poles, shipbuilding, and wharves. In Panama it is being studied for its telephone pole potential and in Colombia it is being exploited for the pulp industry. Cattle will eat mangrove leaf meal after CaCO3 has been added to raise the pH. Amerindians ate the starchy interior of the fruit and hypocotyl during hard times. Dried leaves have been used in Florida as a tobacco substitute. African children use the dried fruits as whistles. In Costa Rica, Western Africa and in Fiji concentrated bark extracts of red mangrove are used to stain floors and furniture. And in the Southwest Pacific a dye from the bark is used paint Tapa (bark) cloth. The Cuna Indians of Panama make fishing lines from the brown branches. Mangrove plantings can be used to extend or preserve precarious shores. For this reason, the American Sugar Company introduced Rhizophora mangle to the mud flats of Molokai and Oahu in the early 20th century.
(Duke, J.A. 1972. Isthmian Ethnobotanical Dictionary.)
(McClain Morton, J.F. 1965. Can the Red Mangrove Provide Food, Feed, and Fertilizer. Econ. Bot. 19:113–123.)
(Garcia-Barriga, H. 1975. Flora medicinal de Colombia. Botanica Medica.)
(Steele, O. C. 2006. The Cultural Importance of Mangroves in the Southwest Pacific. PhD Dissertation University of Hawaii)

The Red Mangrove grows in brackish areas along creeks, bays, and lagoons. It is naturally distributed from West Africa throughout the Caribbean, Mexico, Central America and Northern South America. Among the Pacific Islands, it is found in the Galapagos, Samoa, Tonga, Fiji and New Caledonia.
(Little, E.L. Jr. 1983. Common Fuelwood Crops: A Handbook for their Identification.)

The mangrove community plays an important role in tropical and subtropical regions of the world. Different mangrove species protect and stabilize low lying coastal lands and provide protection and food sources for estuarine and coastal fishies. Mangroves serve as feeding, breeding, and nursery grounds for a variety of fish, shellfish, birds, and other wildlife. The base of the food chain in mangrove communities is supported by the large amount of leaf litter that is produced. In highly productive forests, the leaf litter production can be as high as 1.5 tons per hectare per. An estimated 75% of the game fish and 90% of the commercial species in south Florida depend on the mangrove system.
The tall arching roots called "prop roots" easily identify the genus Rhizophora. Prop roots supply air to the underlying roots and provide support and stability to the Red Mangrove. They also trap mud and silt that flows with the tide, thus gradually increasing the soil around them. They are found closer to the water than the other mangroves in the community due to their high salt tolerance.

Waterfront development has strongly affected the habitat of mangrove communities. Removal of these trees and the destruction of mangrove wetland habitats endanger the natural systems of the coastal zone by causing erosion and reducing the base of the food chain that supports commercial fisheries.

We currently have 18 herbarium specimens for Rhizophora mangle in our collection. Click on any specimen below to view the herbarium sheet data.