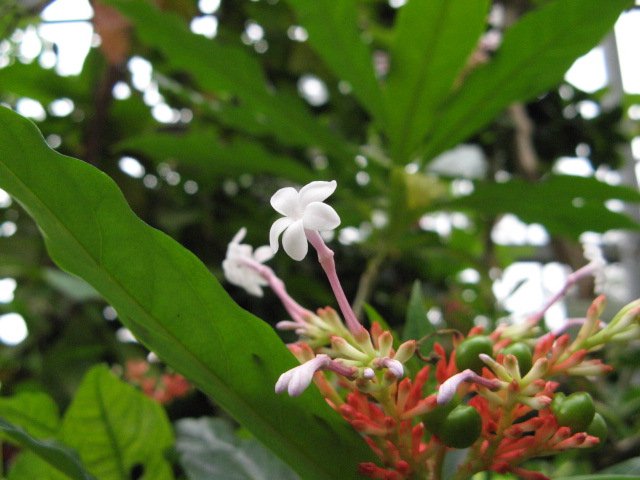 
Rauvolfia serpentina is among the smallest of all the Rauvolfia species (there are more than 100 species) growing to 1 and 1/2 feet in height. A graceful and woody evergreen shrub, with milky sap, it bears elliptical to oval leaves, dark green above and paler below in color, in whorls of three or four along the stem. The small pink to white flowers are born in terminal clusters and produce tiny, oval, fleshy fruits about 1/4 inch long, which turn a shiny purple-black when ripe.
(Magic and Medicine of Plants. 1993.)

In Ayurvedic medicine, the root was used for snakebites, scorpion sting, worms, ulcers.
(Mentioned in the Charaka Samhita, the earliest Ayurvedic Medical Text, circa 700 B.C.)
In addition, the plant has long been valued in India as a sedative and hypnotic in the treatment of insanity, called "moon disease".
The powdered root was used to treat diarrhea and dysentery and other painful intestinal ailments, such as cholera and gastritis. Rauvolfia also enjoys a traditional reputation as a fever-reducing agent and as an emmenagogue (an agent that brings on menstruation).
Indian also found that a single dose of powdered roots could put a child into a deep sleep that lasted all night. Slowly, the use of Rauvolfia serpentine to treat anxiety, insomnia and madness spread throughout India. Leaves have been used to remove opacities of the cornea. In Java it is regarded as a vermifuge.
(Duke, J.A. Handbook of Medicinal Herbs. 1985)
(Balick, M.J. and Cox, P.A. 1996. Plants, People and Culture.)

Rauvolfia serpentina grows in moist tropical forests of the Pacific, South America, Asia and Africa.
(Magic and Medicine of Plants. 1993).
Holy men in India, including Mahatma Gandhi, have reportedly chewed the root of the Rauvolfia to help achive a state of philosophic detachment while meditating.
(Duke,J.A. Handbook of Medicinal Herbs. 1985.)

The shrub is rarely disturbed by the local people unless someone is bitten by a snake. The shrub is then unearthed and its long root given to the victim. A local legend claims that in ancient time mangooses were observed to feed on the plant before engaging in combat with cobras. Copying the reputed activity of the mangoose, local people found that the shrub could serve as a potent antidote to snakebite.
(Balick,M.J. and Cox,P.A. 1996. Plants, People and Culture.)

(Information for this species compiled and recorded by Camelia Cirnaru, NTBG Consultant.)
The natural reserves of this plant are declining, especially after reports of its medicinal properties appeared in literatures. International Union for the Conservation of Nature and Natural Resources (IUCN) has kept this plant under endangered status.
(Pankaj Oudhia. 2002. Rauvolfia serpentina.)

Rauvolfia is cultivated for medicinal uses of the 30 alkaloids, especially reserpine, found in the root. There is such a great demand for the alkaloids and the raw drug that India is taking steps to increase production to 100 to 150 MT root per year.
(Duke,J.A. 1985. Handbook of Medicinal Herbs.)

In the eighteenth century, a specimen was sent to the herbarium in Leyden, Holland, but Rauvolfia serpentine was then ignored by scientist, as most medicinal plants have been. Less than 1/2 of 1% of all flowering plant species in the world have ever been ehaustively studied for their potential pharmacological activity.
In 1931, Indian chemists isolated a variety of molecules from the plant, but found them to be relatively inactive. In 1949 Emil Schlittler, a chemist at CIBA pharmaceuticals in Basel, Switzerland, with his colleague Hans Schwarz, extracted from Rauvolfia roots an alkaloid, a nitrogen-containing physiologically active organic compound, which they named reserpine. They demonstrated that at remarkably low oral doses, 0.1 mg per kilogram of body weight of reserpine lowered blood pressure. In clinical tests reserpine lowered one's patient blood pressure from 300/150 to 160/100 and unlike standard sedatives, it does not produce grogginess, stupor, or lack of coordination.
Up to that time, all known compounds that lowered blood pressure did so by dilating blood pressure. Reserpine, has a direct effect on the hypothalamus of the brain, opening up am entirely new mode of pharmacological action. CIBA reserpine trade name is Serpasil.
(Balick,M.J.and Cox,P.A. 1996. Plants,People and Culture.)

The great value of the drug Reserpine lies in the clinical proven fact that it is not required to be administered in critical dosages, has rare side effects, it is non-habit forming and without withdrawal symptoms or contraindications. The drug is used mostly in treating high blood pressure, but also for insomnia, hyperglycemia, hypochondria, mental disorders, and certain forms and insanity.
Also used for hypertension, neuropsychiatry, gynecology and geriatrics.
Other drugs derived from Rauvolfia serpentina are Rescinnamine and Serpentinine.