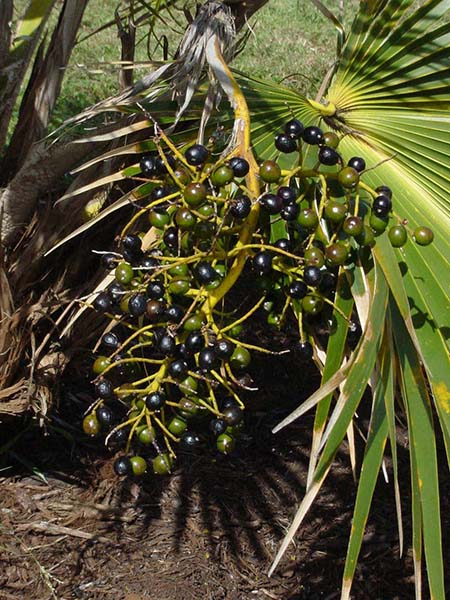 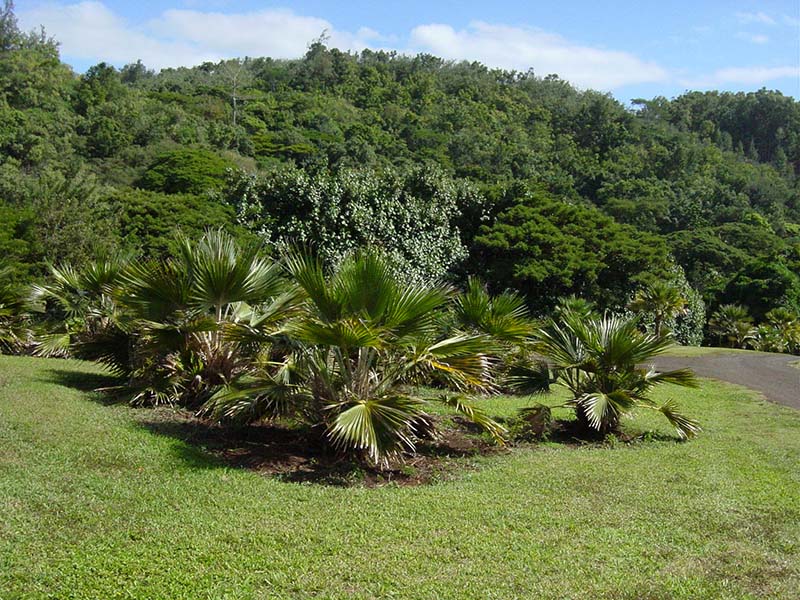 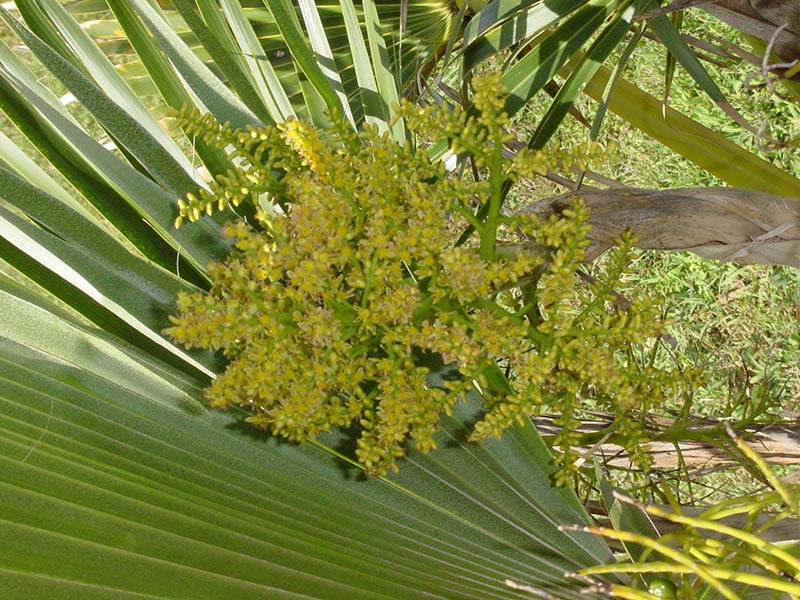 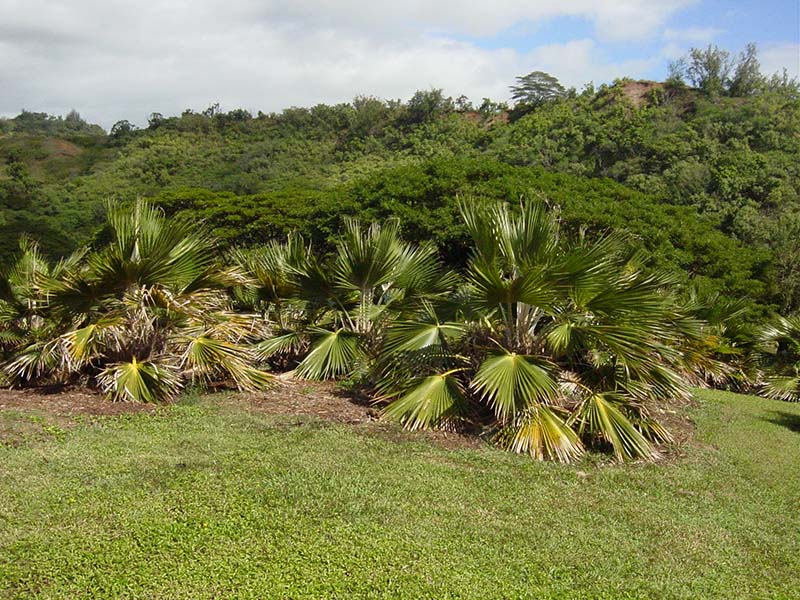 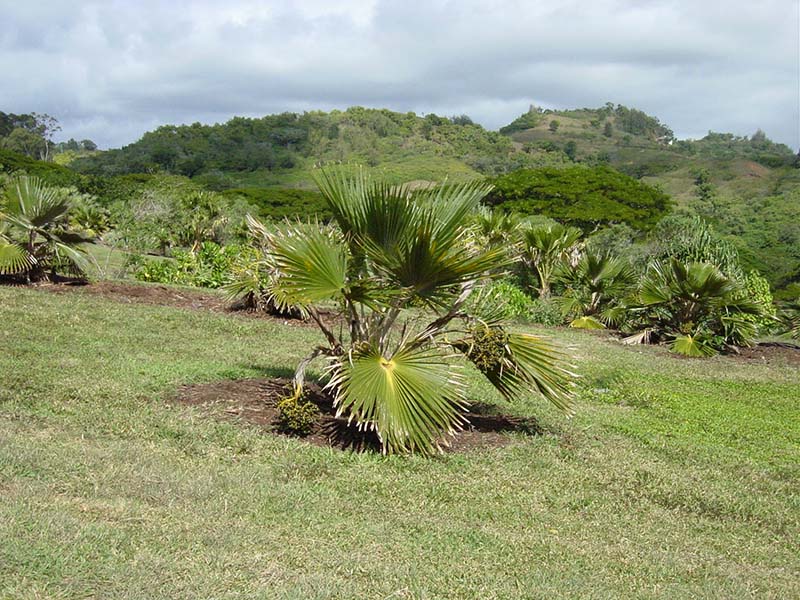 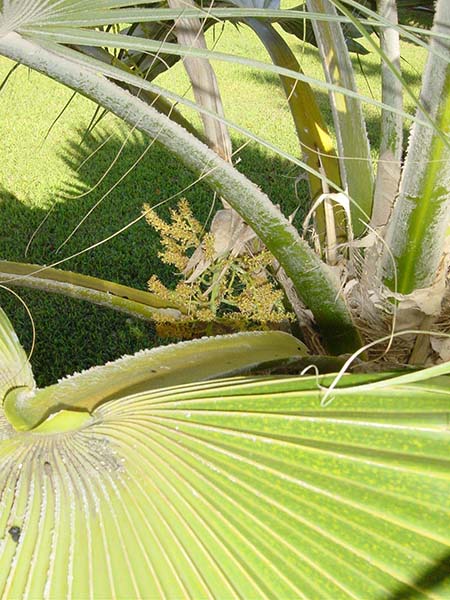 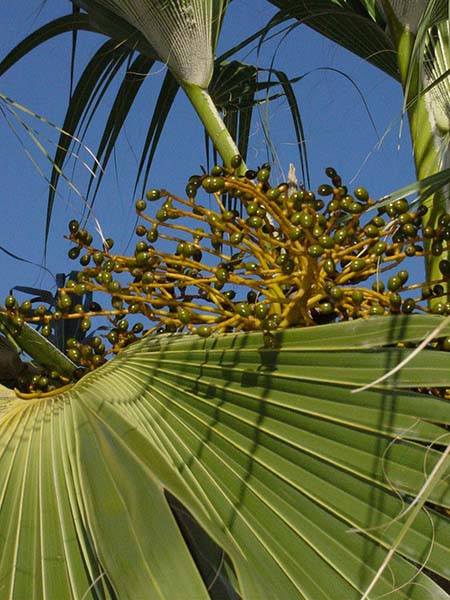 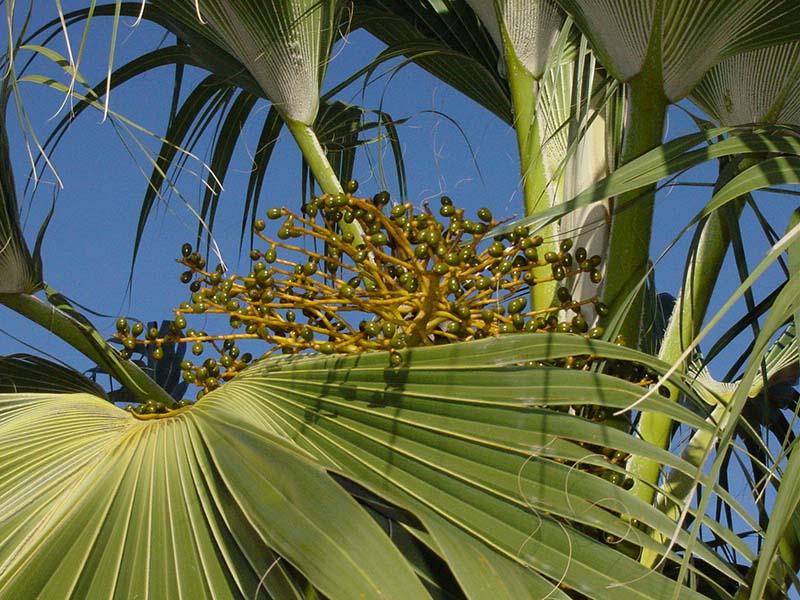 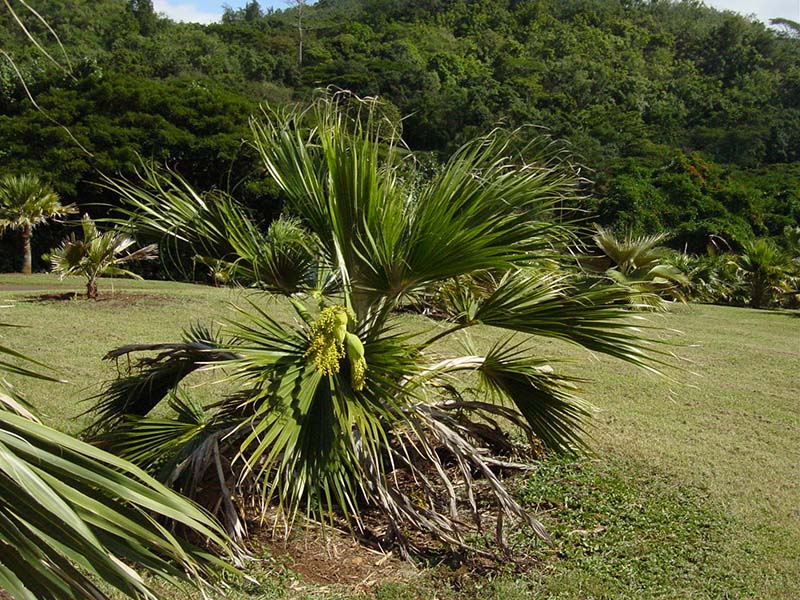 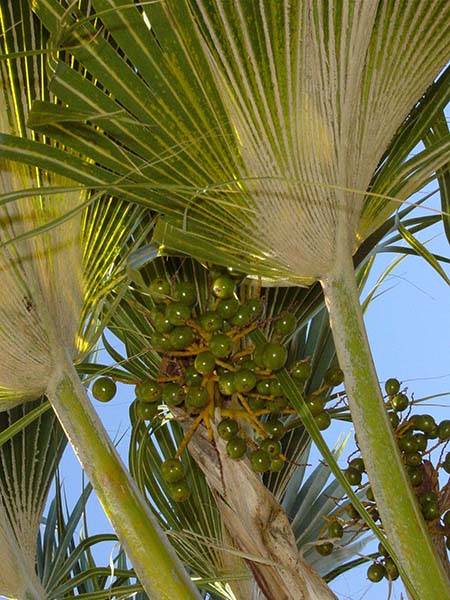 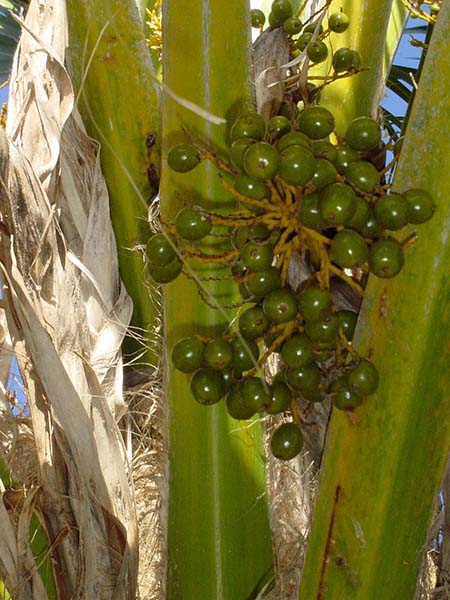 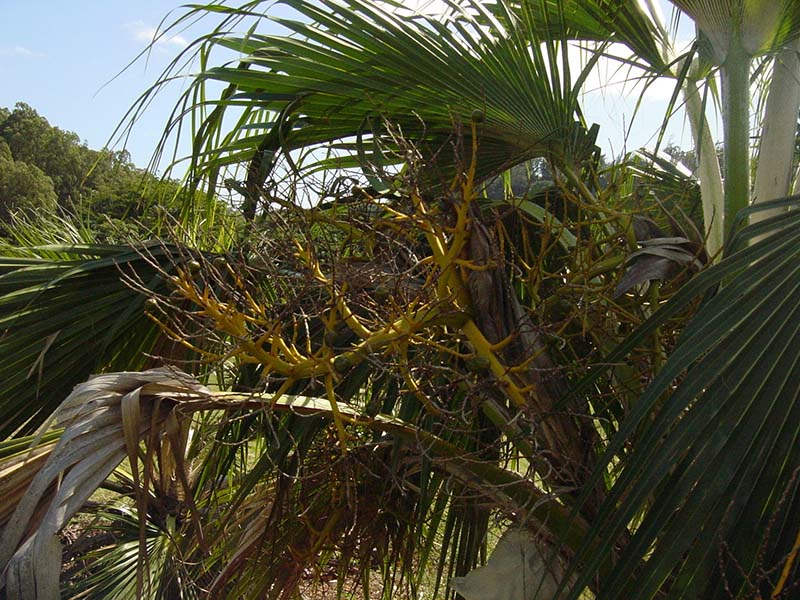 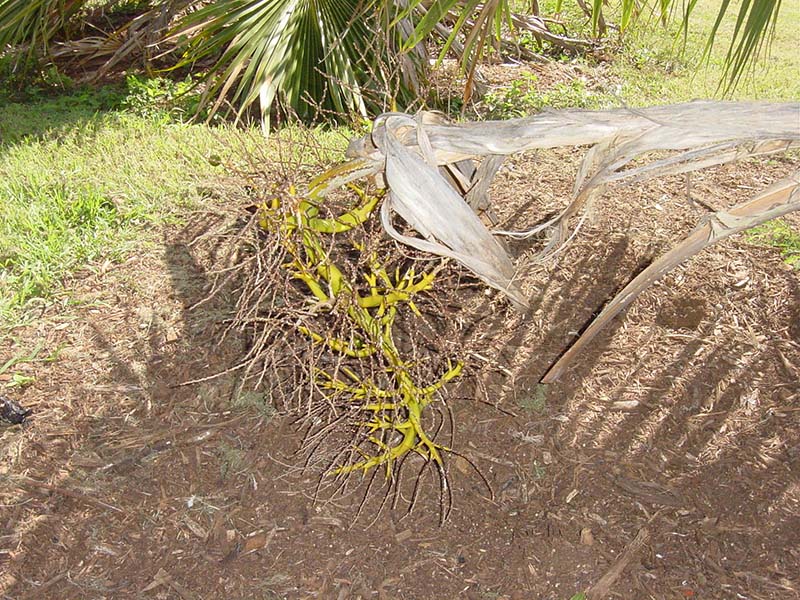 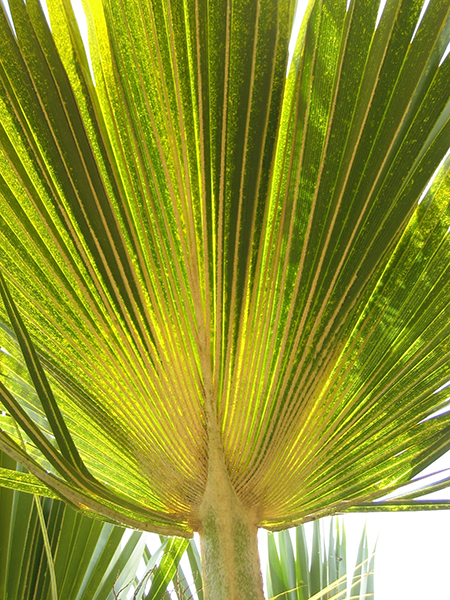 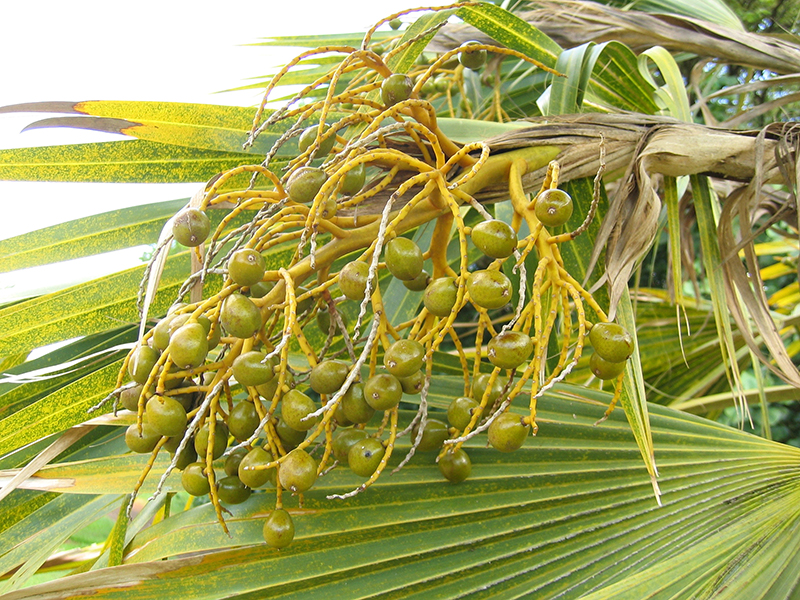 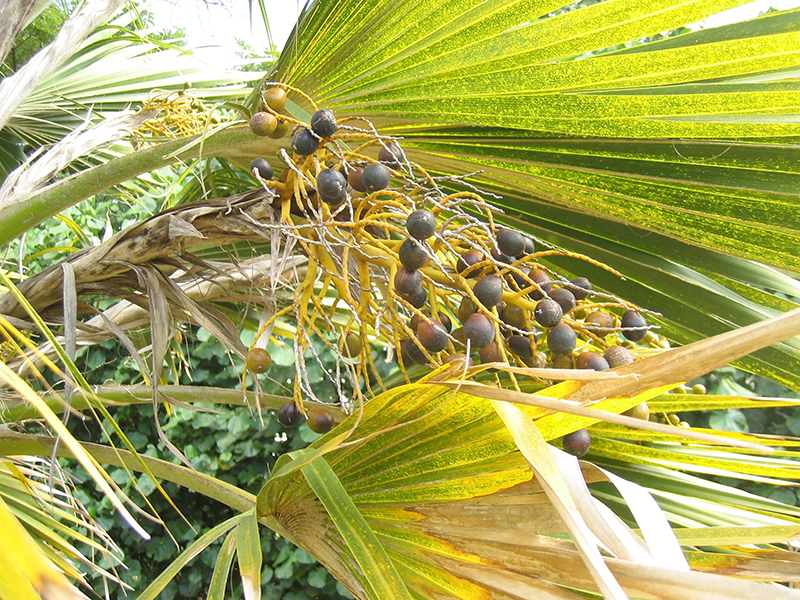 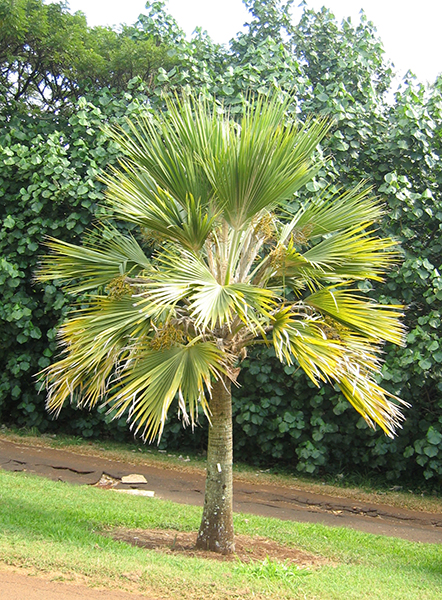 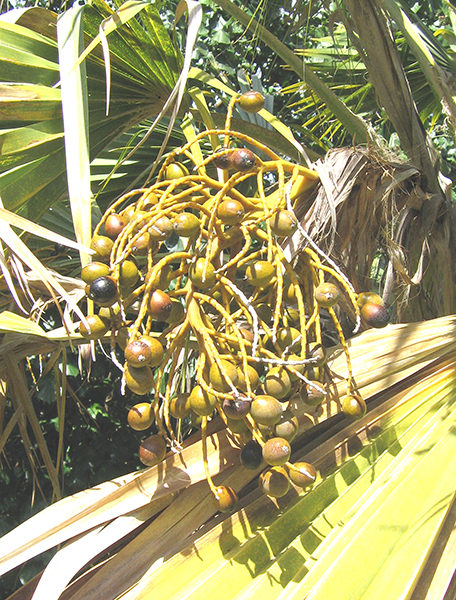 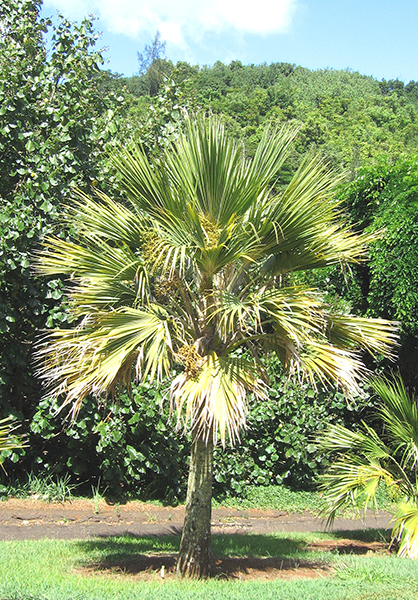 A fine looking, long-lived palm at 10-25 m (33-82 ft) tall, Pritchardia maideniana (formerly known as P. affinis) is often used as a landscape specimen on the west side of Hawai'i Island. It is one of 19 native species of the fan palm genus Pritchardia, distinguished by undulating, pale green and often yellowing blades and almost round black fruits 2-3 cm in diameter.
(Bezona,bN. 1974. Palm Briefs:The Propagation, Growth, and Distribution of Pritchardia affinis).

Threats:
1. Animals: Rats eat fruits and seeds. Feral pigs rood and destroy seedlings
2. Weeds: The remaining trees are found in degraded habitats dominated by non-native plants, either cultivated or weeds. These plants compete for available resources and space.
3. Fire: Many Pritchardia affinis usually occur in areas subject to seasonal drying near population centers.
4. People: Many of the remaining individuals are in coastal land that is very desirable for development. Over-collection is also a possible threat
5. Other: Pritchardia are susceptible to lethal yellow, a bacterial like organism that often attack palms. While Hawai'i does not have lethal yellow yet, it is a major potential threat. Rising sea levels also threaten near-shore individuals.
(USFWS.1994.1996.)

Current Management Summary:
1. Many old trees are found on private property, in yards and gardens, some neglected, others being watered and cared for.
2. Plants are being restored to areas within their former range at Hawai'i Volcanoes National Park, as part of a larger habitat restoration project.(Belfield, Tom. 2001. Pers. com.)

Research Management Needs:
1. Fencing, fire breaks, and rat control are needed for unprotected plants.
2. Efforts to prevent the spread of lethal yellow to Hawai'i must be developed and continued.

The leaf blades were used for thatching in old Hawai'i, the wood for spears, and the seeds were eaten. In the 19th century, people began making hats from the blades, and old trees are often marked with foot holds cut into the trunks to make harvesting the leaves easier.
(USFWS.1994.1996.)

The species' natural habitat is unknown. It likely was cultivated by Hawaiians prior to western contact, and it is still planted today. This species is currently found on the leeward side of the Island of Hawaii in inhabited or abandoned Hawaiian coastal settlements and occasionally inland mesic gulches at 0-600 m (0-2000 ft) in elevation. The name P. maideniana was published prior to P. affinis and must be adopted as it is the oldest available name for this species. The type collection of P. maideniana is from a plant in cultivation at the Royal Botanic Garden in Sydney, Australia, where the species is still cultivataed.
(Hodel, D.R. 2007. A Review of the Genus Pritchardia. Palms 51(supplement): S1-S52.)
(Wagner,W.L., D.R. Herbst, and S.H. Sohmer. 1990. Manual of the Flowering Plants of Hawaii.)
(USFWS.1994.)
In old Hawai'i,the seeds of this species were eaten.
(USFWS.1994.1996.)
According to pollen cores from before 1210 B.C. to 1565 A.D., Pritchardia sp. may once have been codominant in certain lowland forests, along with Kanaloa kahoolawensis and Dodonaea viscosa, at which point Kanaloa kahoolawensis disappeared from the pollen record and Dodonaea viscosa and Pritchardia sp. declined dramatically. Now most Pritchardia maideniana individuals grow in non-native dominated plant communities.(USFWS.1999.)
The generic name "Pritchardia" honors William Thomas Pritchard, a nineteenth-century British consul in Fiji and Samoa and author of "Polynesian Reminiscences, or Life in the South Pacific Islands"(1866).
(Green,P.S. 1996. A Hawaiian Florilegium.)
Pritchardia maideniana is registered as an endangered species.
Many of the remaining individuals of the extremely rare species are located in areas that are highly valued for development. Loulu is endemic to South Kona and is now only found on the island of Hawaii where native people likely planted them. This species is known to have come to the island at least 40,000 years ago probably by the rafting of entire individuals across the ocean. It is thought that these palms grew in extensive groves surrounding many of Hawai'i's islands before the Polynesians brought the pig and the Polynesian rat.
(Bezona,N. 1974. Palm Briefs:The Propagation, Growth, and Distribution of Pritchardia affinis).
(Hodel, D.R. 2007. A Review of the Genus Pritchardia. Palms 51(supplement): S1-S52.)

Seven populations containing 50-65 individuals total are known in the wild. These plants are located on both private and state owned. However, since this species is easily cultivated, and may even have been cultivated in traditional Hawai'i, it is difficult to distinguish remnants of truly wild populations from cultivated plants.
(Bruegmann, M.M. 1997. List of endangered, threatened, and candidate plants.U.S.Fish and Wildlife Service,Pacific Islands Ecoregion).
(USFWS.1994.)
At Amy Greenwell Garden, fruit are collected from garden-grown plants and seeds are propagated to produce plants for restoration and replanting. Pritchardia maideniana grows readily from seed, but seeds are not known to store well.
(Chapin, Melany. 2000. Pers. com.)

We currently have 16 herbarium specimens for Pritchardia maideniana in our collection. Click on any specimen below to view the herbarium sheet data.