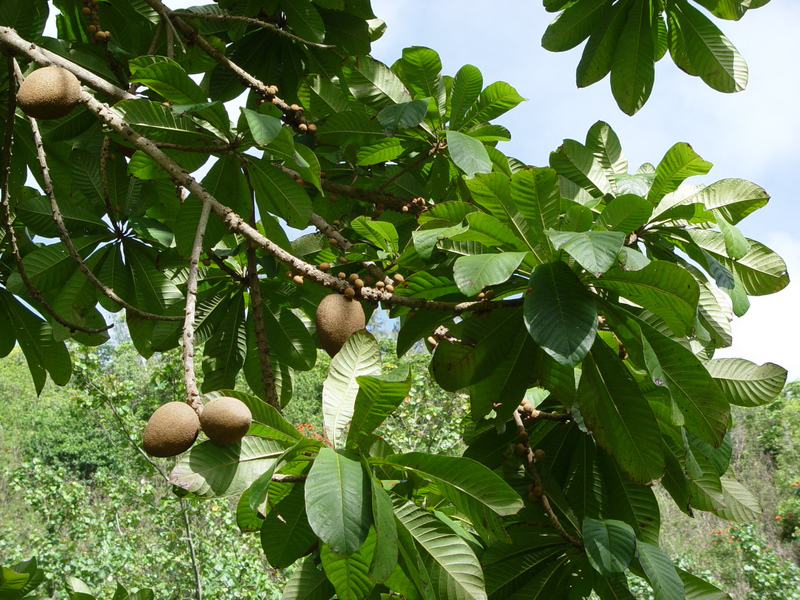 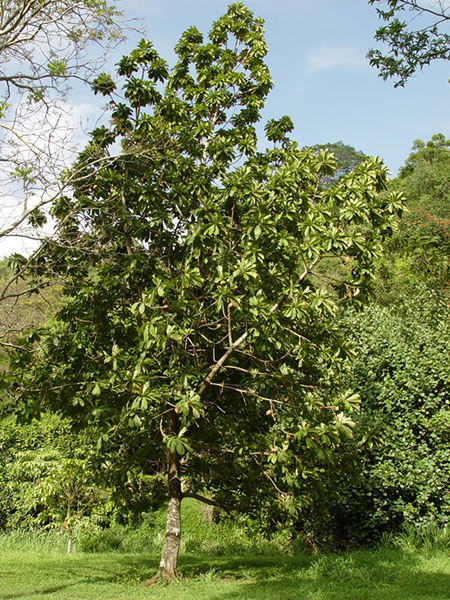 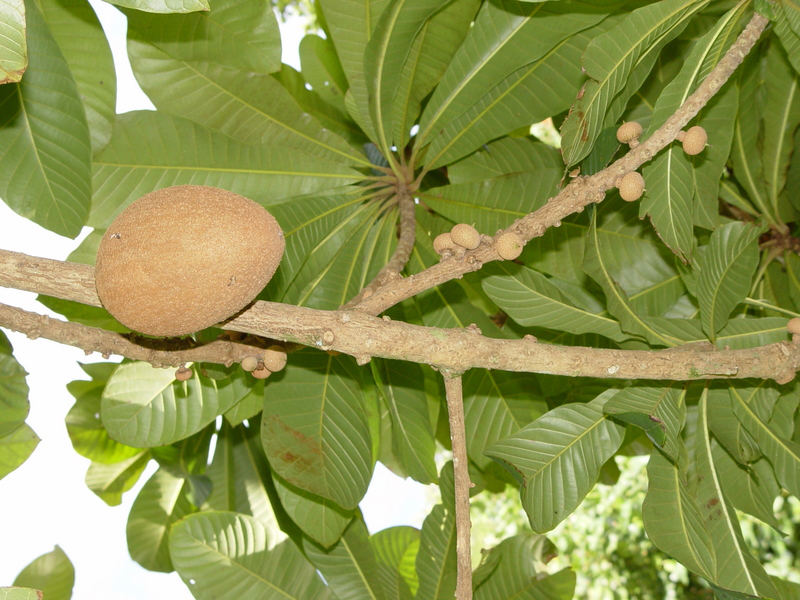 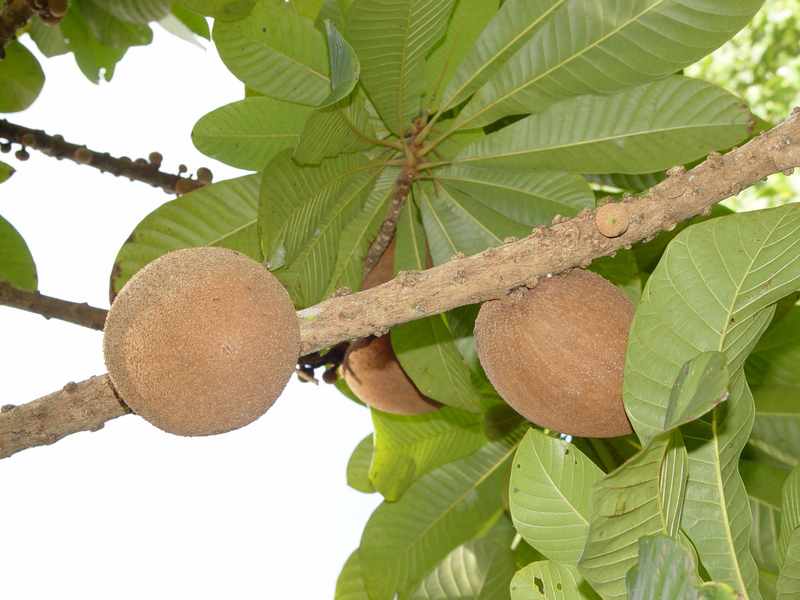 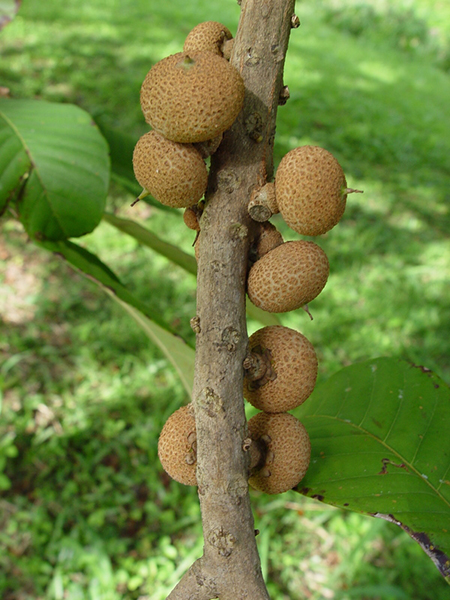 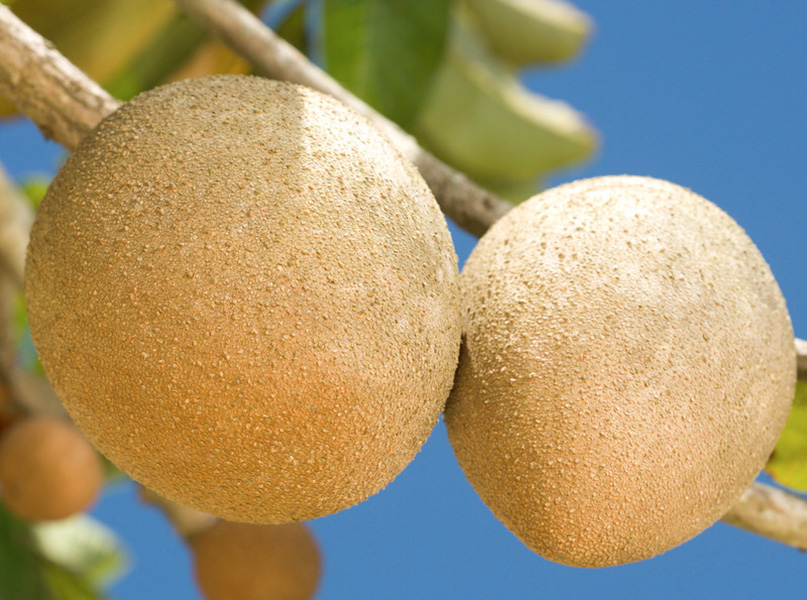 Pouteria sapota, usually known by the common name Mamey Sapote, is a tree that typically grows around 20 m tall, but has been known to reach 30 or 40 m. The trunk can reach 60 cm in diameter and the cut bark exudes a white latex. The leaves are obovate or oblong and are concentrated toward the apex of the branches. The flowers are small and grow in abundance under new branches and along leafless branches. Each flower consists of five true and five false stamens inserted halfway up the corolla tube; the pistil has only one stigma and the ovary has five carpels.

The fruit ranges in shape from fusiform (spindle shaped), to elongated, ellipsoid, egg shaped or even spheroidal, and may weigh up to 3 kg in some cultivars. The brown corky skin is scurfy and somewhat rough. The flesh varies in texture and is red, orange or greyish in colour. It is aromatic, sweet and soft when ripe, and usually has some fibers, depending on the cultivar. The taste of a Mamey Sapote can be described as similar to candied yams. In general, the fruit contains one or sometimes two large seeds. These have sharp ends and are ellipsoid in shape and shiny dark brown in color. The seeds take between 40 and 70 days to germinate, a process that can be speeded up by simply removing or scarifying the seed coat before sowing.

The latex produced by the tree is used in osme areas to help remove fungus from skin.
Pouteria sapota is native to the lower parts of Central America, especially southern Mexico and Guatemala, but it is cultivated throughout the world for its delicious fruit. Mamey Sapote can also be found cultivated in Florida and the Caribbean Islands including Cuba where it is highly esteemed. It thrives in tropical climates with rainfall over 75” a year. Patience is key with this tree because a productive fruit bearing tree takes 8-10 years after a seed is planted.

Fruit of Pouteria sapota will usually ripen and turn soft within a few days of being picked, unless too immature. The fruit is usually eaten out of hand, in desserts, or made in drinks and smoothies. The pulp can also be made into a jam or sherbet. Everyone seems to have their own theory as to when to pick the fruits, but it is generally considered ripe when the flesh color changes to a slight shade of orange-red. Degree of ripeness can be seen when you scratch off the surface of the fruit with your fingernail. If the layer just under the skin is orange, the fruit is nearly ripe and will ripen a few days after picking, a process that can be hastened by putting the fruit into a paper bag.
The wood is thick and strong enough to be used for furniture, but the trees are usually harvested for their fruit.

We currently have 4 herbarium specimens for Pouteria sapota in our collection. Click on any specimen below to view the herbarium sheet data.