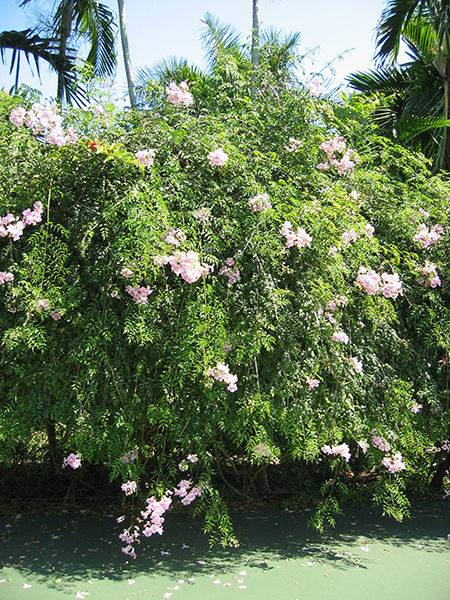 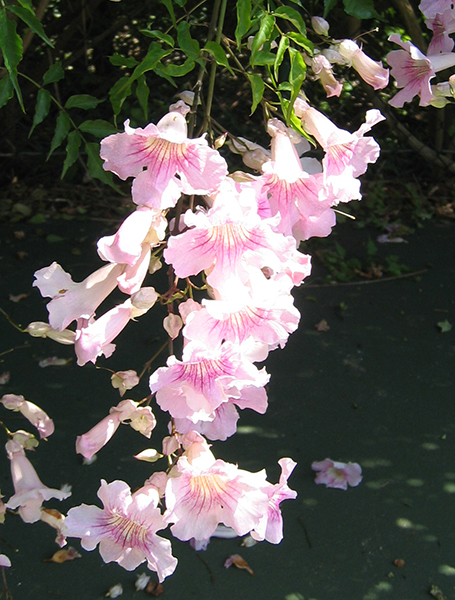 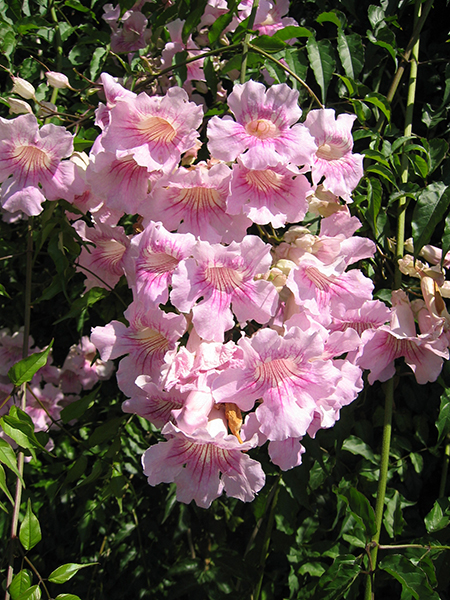 
Podranea ricasoliana with its glossy foliage and abundance of attractive pink flowers is a very showy plant, well known to many South African gardeners. It is a vigorous, woody, rambling, evergreen climber without tendrils. The leaves are compound and a deep glossy green. It sends up many tall strong stems, 3 to 5 m up to 10+ m high if left unchecked, that have long spreading branches with a graceful arching habit. Large bunches of fragrant lilac-pink, trumpet-shaped, foxglove-like flowers are produced all summer long (November to March). The flowers are carried at the branch tips of the new growth, and are held above the foliage. The flowers terminate a branch, and after flowering new side branches develop behind the spent flowers. The fruit is a long, narrow, straight, flattened capsule. The seeds are brown, ovate and flat, in a large rectangular papery wing. It tends not to produce many fertile seeds.
(Malan,C and Notten, A. 2002. Kirstenbosch National Botanical Garden.)

This is an excellent plant for arbors, pergolas and carports and is a valuable shade-giving plant in a hot climate. It is ideal for an informal hedge or planted against a wall or a fence to create a screen. It is a useful rambling ground cover for an embankment as the stems root wherever they touch the soil, forming large, swollen water- and soil-holding root clumps. It is suitable for the coastal garden. It looks good in a large container and is a candidate for espalier and can be pruned and trained into a weeping standard. It has no tendrils, so it has to be tied to supports. Port St Johns creeper mixes with Bauhinia galpinii, Plumbago auriculata, and Tecomaria capensis, providing an interesting intermingling of colours. It is not a good cut flower as the flowers drop quite soon after cutting.
(Malan,C and Notten, A. 2002. Kirstenbosch National Botanical Garden.)


Port St. John’s Creeper is named after the location in South Africa from which it is native.
The flowers are often visited by carpenter bees (Xylocopa species).
The name "Podranea" is an anagram of Pandorea, a closely related Australian genus, in which Podranea was first classified. Pandora means all-gifted. She was the first woman of Greek mythology and was given the box that contained all man's ills. When she opened it, they all flew out.
(Malan,C and Notten, A. 2002. Kirstenbosch National Botanical Garden.)

Many South African botanists suspect that this climber may not be indigenous to southern Africa and that it was introduced here by slave traders. All the sites where Podranea ricasoliana are found have ancient connections with slave traders, who frequented the eastern coast of Africa long before the 1600's. It has become such a widely grown garden plant in all the warmer parts of the world that it may prove difficult to find its real origin.
(Malan,C and Notten, A. 2002. Kirstenbosch National Botanical Garden.)

We currently have 6 herbarium specimens for Podranea ricasoliana in our collection. Click on any specimen below to view the herbarium sheet data.