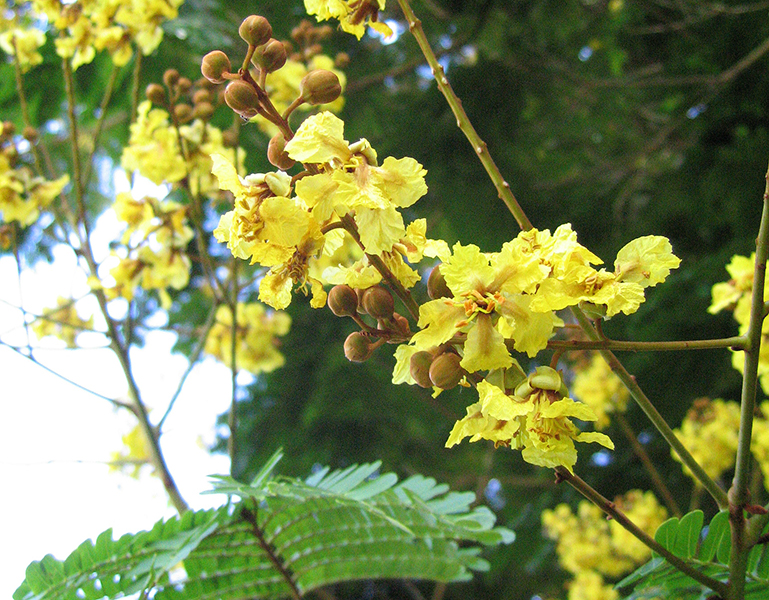 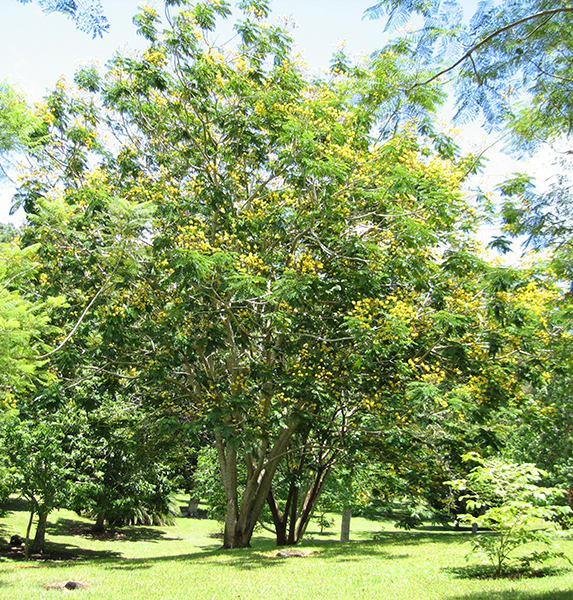 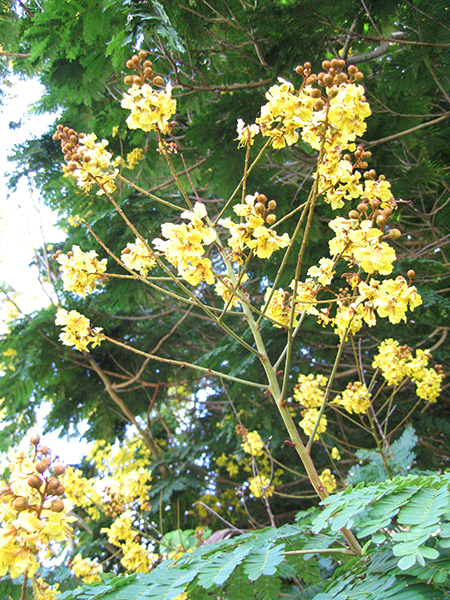 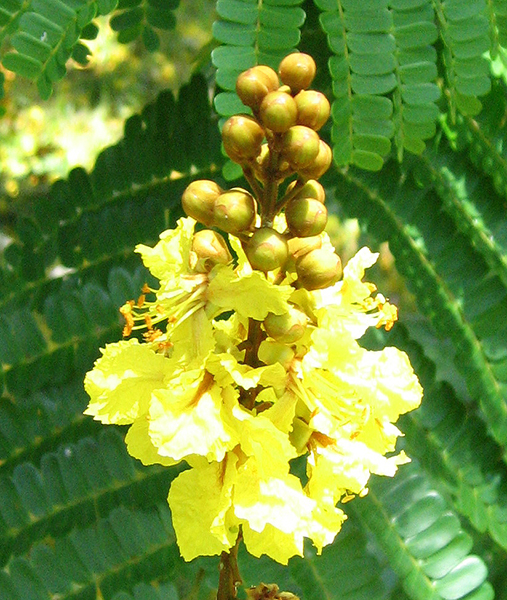 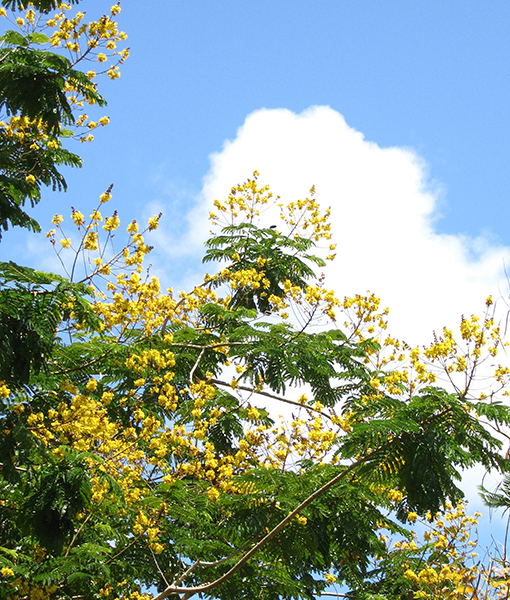 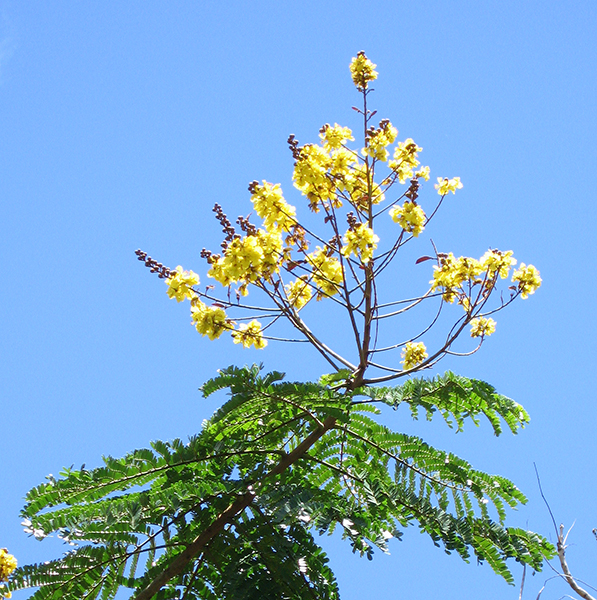 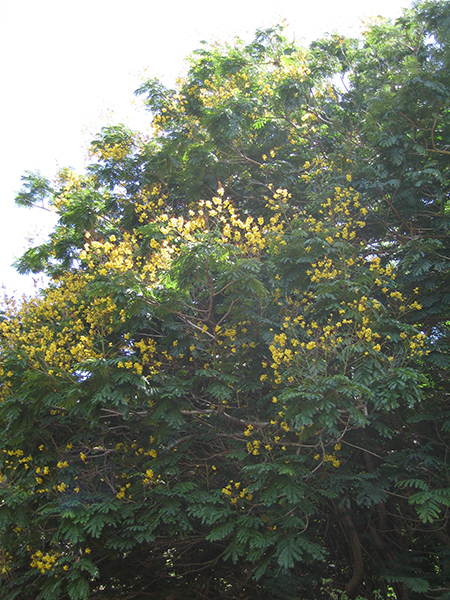 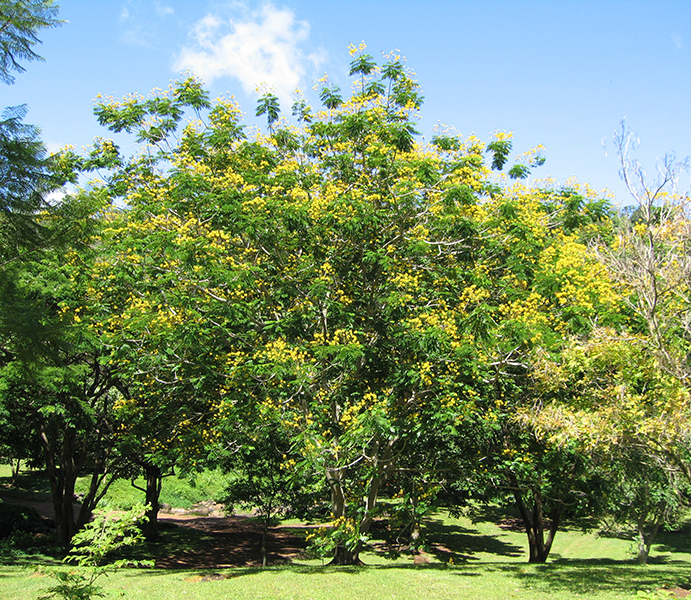 Yellow Poinciana is a very showy flowering tree up to 50' tall, with wide-spreading branches that form an umbrella-like crown up to 25' across. The stems and twigs are rusty-red tomentose. The leaves are bipinnate (twice compound), about 2' long with 8-20 pairs of 3/4"-long oblong leaflets. The fragrant flowers are clustered on upright stems about 18" long. Each flower is about an inch and a half across with translucent yellow, crinkled petals. The flowers have conspicuous orange stamens and each petal has a reddish brown mark in the center. They are followed by purplish brown, flattened, oblong seed pods, 3-4" long, which remain on the tree until the next flowering season.
(Smith, A. C. 1985. Flora Vitiensis nova: A new flora of Fiji. Lawai, Kauai, Hawai'i. NTBG.)

Because of the dazzling beauty of its flowers Yellow Poincianas are usually planted as specimen trees or as shade trees. The dark green, delicate, feathery leaflets provide a softening effect for the tree’s large size and create a welcoming, dappled shade. Hence, they are used as street trees in tropical cities, and commonly planted for shade in tropical and subtropical gardens.
(Smith, A. C. 1985. Flora Vitiensis nova: A new flora of Fiji. Lawai, Kauai, Hawai'i. NTBG.)

(Information for this species compiled and recorded by Camelia Cirnaru, NTBG Consultant.)
Yellow Poinciana is native to coastal areas from Sri Lanka through the Malay archipelago and Indonesia to northern Australia.
(Smith, A. C. 1985. Flora Vitiensis nova: A new flora of Fiji. Lawai, Kauai, Hawai'i. NTBG.)

Naturalized in the tropics Yellow Poinciana has escaped from cultivation and established itself in disturbed areas in southern Florida.
In Hawai'i, it appears to be in the early stages of naturalization in Nahiku on the road to Hana, Maui.
(Smith, A. C. 1985. Flora Vitiensis nova: A new flora of Fiji. Lawai, Kauai, Hawai'i. NTBG.)
(Starr, F., K. Martz and L.L. Loope. 2002. New Plant Records from the Hawaiian Archipelago.)

We currently have 16 herbarium specimens for Peltophorum pterocarpum in our collection. Click on any specimen below to view the herbarium sheet data.