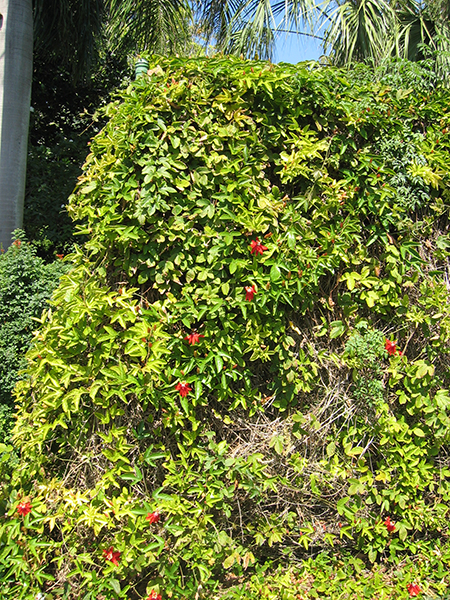 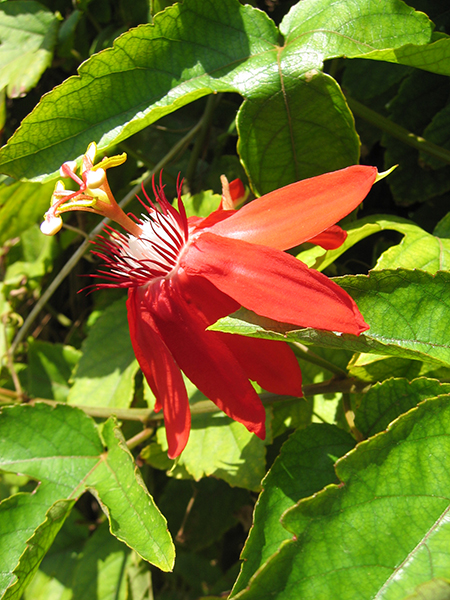 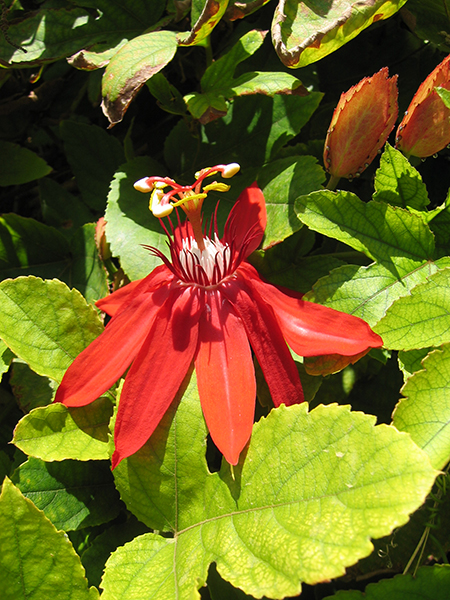 The juice of Crato Passion Fruits is given as a mouth bath against throat pains.
(Geo Coppens d'Eeckenbrugge and Dimary Libreros Ferla. 1997. Fruits from America. An Ethnobotanical Inventory.)

Crato Passion Fruit has edible fruits that are used for tea or for making Guarapo drink. Brazil has long had a well-established Passion Fruit industry with large-scale juice extraction plants. The purple Passion Fruit is there preferred for consuming fresh. The yellow Passion Fruit for juice processing and the making of preserves.
(Geo Coppens d'Eeckenbrugge and Dimary Libreros Ferla. 1997. Fruits from America. An Ethnobotanical Inventory.)
(Morton, J. 1987. Passionfruit. Fruits of Warm Climates.)

The delights of passionfruit would suffice if they were purely gustatory — but add the fragrance of the fruit and the exquisite beauty of the flowers and you have the perfect plant for sentient beings.
The name "passion fruit" is not derived from any aphrodisiac quality of the fruitbut from a symbolic association. "Passus" means "suffering" and "Flos" means "flower". It was named, reportedly, by Spanish Catholic missionaries who saw in the flower the symbolism of the Passion of Christ.
An examination of the structure of the flower may help the reader to understand the symbolism. The corona was seen as the halo or the crown of thorns. To some, the 72 filaments of the flower corolla indicate the number of thorns in the torturous crown. The five stamens were thought to represent the five wounds or the hammers used to drive the nails. The three knobbed stigmas were compared to the three nails or to Christ and the two thieves on the crosses. The five petals together with the five sepals were thought to stand for the ten apostles (excluding Peter who denied the Lord and Judas who betrayed Him). The three bracts symbolized the trinity, the lobed, mitten-like leaves. To some the spear-shaped trifoliate leaves suggest the spears that pierced Christ's side. The reedlike stems of most Passion Flower vines are sometimes associated with the passage, "Christ was given vinegar on a reed." The axillary coiling tendrils are said to be the cords or whips used by the persecutors. The 30 round marks on the underside of some leaves are representative of the 30 pieces of silver which tempted Judas to betray Christ. The white in the flower represented the emblem of purity, the blue, the heaven. The flower remains wide open for three days before it fades away, denoting the death, burial and resurrection of Christ.
In the Bahama Islands the succulent fruit of the profusely growing Passion Flower is touched only by scientists because the natives consider it sacred.
The Spaniards reportedly regarded the blossoms as a sign that the Indians should be converted to Christianity.
In South America the Passion Flower is often referred to as the "Holy Rood Flower" and is the ecclesiastical emblem of Holy Cross Day.
St. Francis of Assisi is said to have seen the Passion Flower vines, during one of his fasting visions, climb the cross and twine itself around the scars in the wood made by the nails in the Crucifixion.
(Fisch, Muriel B. 1975. Passionfruit, The World Over. CRFG Yearbook.)

The Latin name "cincinnata" refers to the hairy appearance of the corona.
Search Again