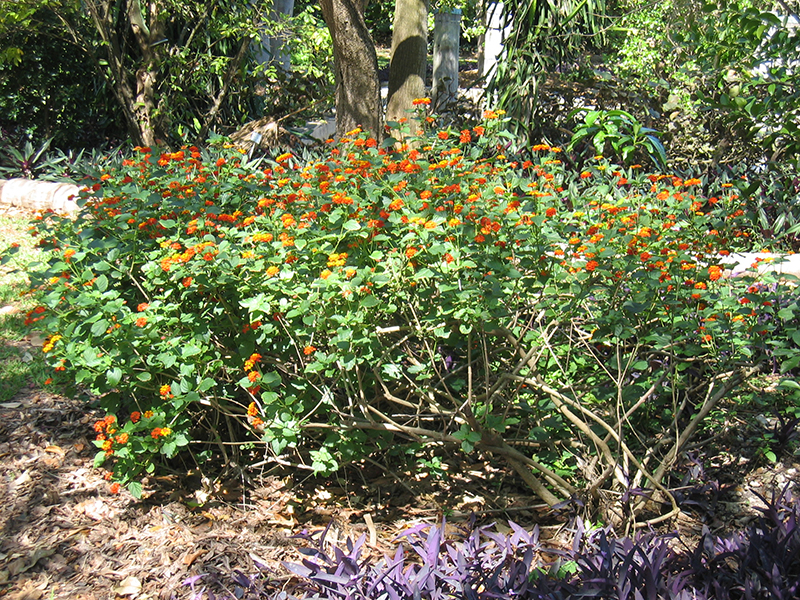 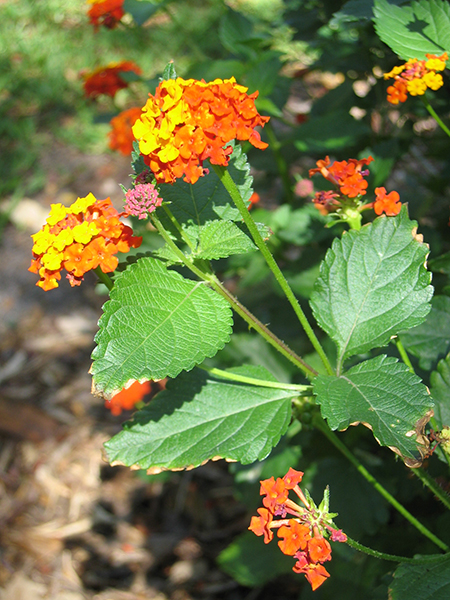 Lantana camara is a low erect or subscandent, vigorous shrub with stout recurved prickles and a strong odour of black currents. It grows to 1.2-2.4 meters (or even more). Its root system is very strong, and it gives out a new flush of shoots even after repeated cuttings. Leaves are ovate or ovate-oblong, acute or subacute, crenate-serrate, rugose above, scabrid on both sides. Flowers are small, usually orange, sometimes varying from white to red in various shades and having a yellow throat, in axillary heads, almost throughout the year. The fruit is small, greenish-blue black, blackish, drupaceous, shining, with two nutlets, almost throughout the year, dispersed by birds. Seeds germinates very easily.
(Sastri, C.S.T. and Kavathekar, K.Y. (1990). Plants for Reclamation of Wastelands.)
Lantana camara leaves are boiled and applied for swellings and pain of the body. Its bark is astringent and used as a lotion in cutiginous eruptions, leprous ulcers. Alkaloidal fractions, obtained from leaves, have been found to lower blood pressure, accelerate deep respiration and stimulate intestinal movements in experimental animals.
(Singh, U., Wadhwani, A.M. and Johri, B.M. (1996). Dictionary of Economic Plants of India.)

Warning: Pets have reportedly become ill after ingesting Lantana. The unripe berries are known to be very toxic and the foliage toxic to livestock.
(Pacific Island Ecosystems At Risk. 2003. Lantana camara.)

Lantana camara is grown as hedge plant. Its stalks are used as raw material for paper pulp which is used for wrapping, writing and printing paper.
(Singh, U., Wadhwani, A.M. and Johri, B.M. (1996). Dictionary of Economic Plants of India.)

Lantana is present in many Pacific Island nations. On the Pacific rim it occurs in Australia, New Zealand, China, Thailand, Cambodia, Viet Nam, Malaysia, Indonesia, and the Philippines. In the Indian Ocean it occurs on Mauritius, La Reunion, and Rodrigues.
(Pacific Island Ecosystems At Risk. 2003. Lantana camara.)


Lantana is a favorite species for butterflies and non-invasive lantanas should be a part of any butterfly garden.

Lantana is listed as a Category I invasive exotic species by the Florida Exotic Pest Plant Council, which means that it is known to be "invading and disrupting native plant communities in Florida". Lantana is also invading natural areas in Texas and is a huge problem in Hawaii.
(Pacific Island Ecosystems At Risk. 2003. Lantana camara.)

We currently have 33 herbarium specimens for Lantana camara in our collection. Click on any specimen below to view the herbarium sheet data.