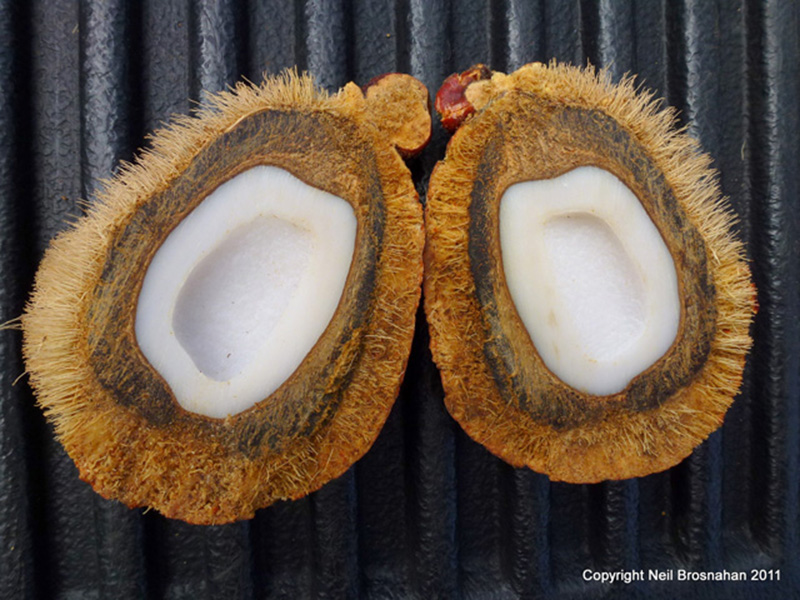 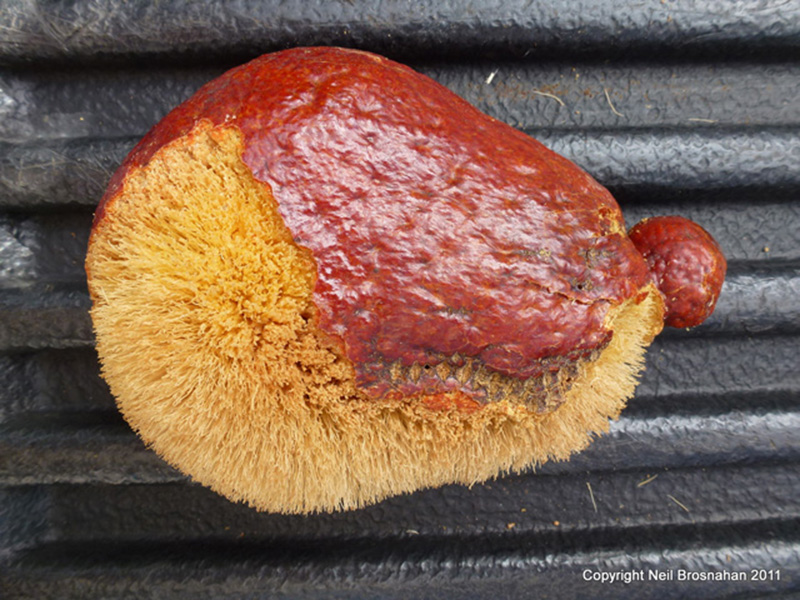 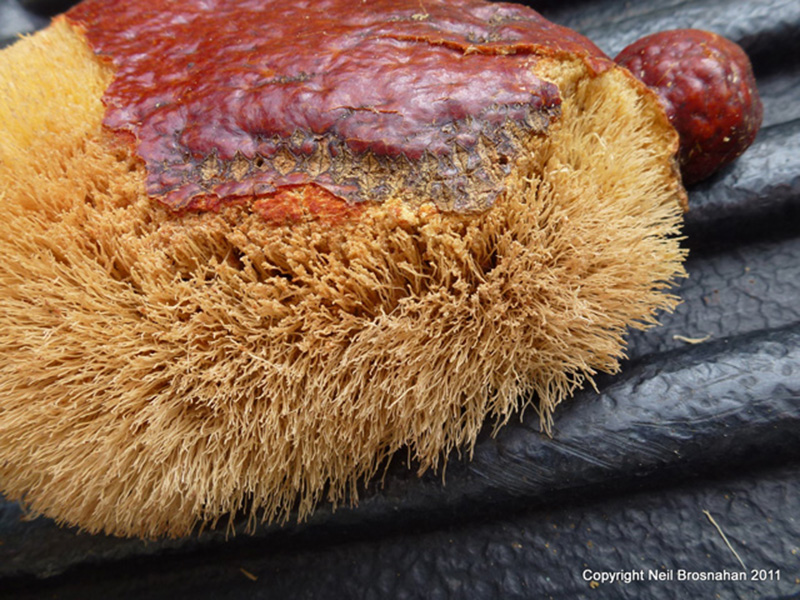 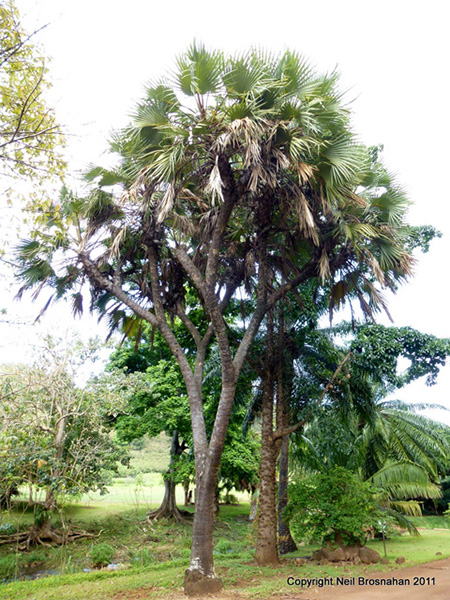 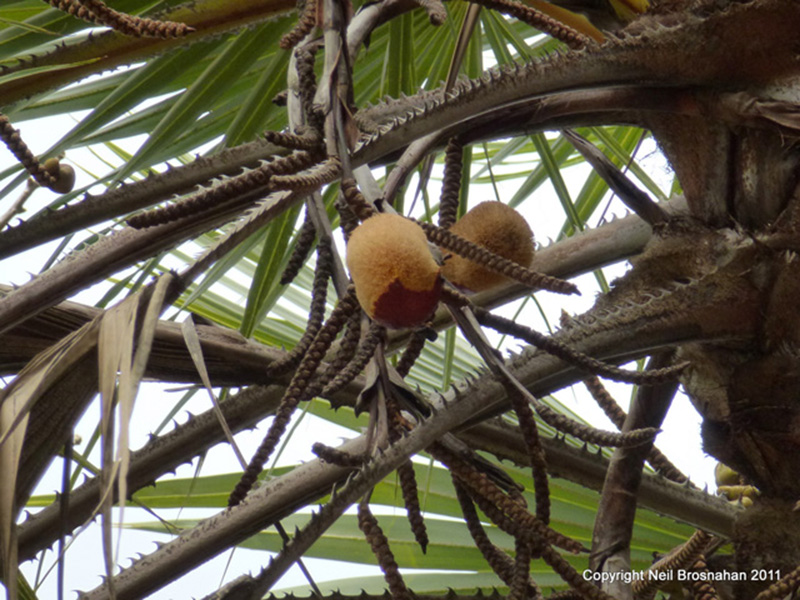 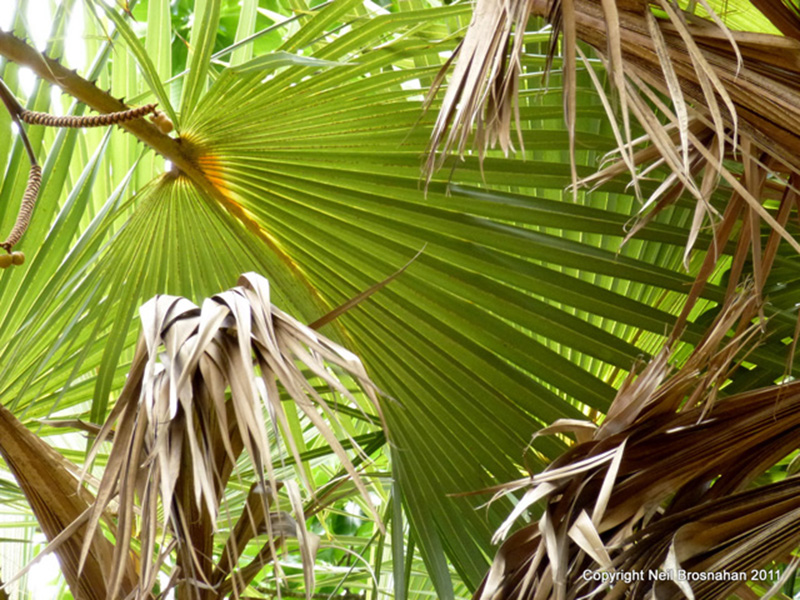 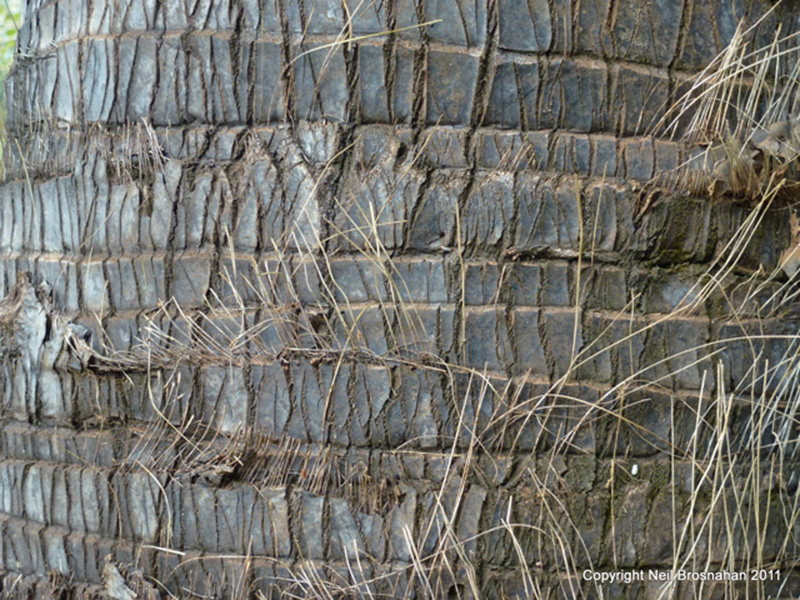 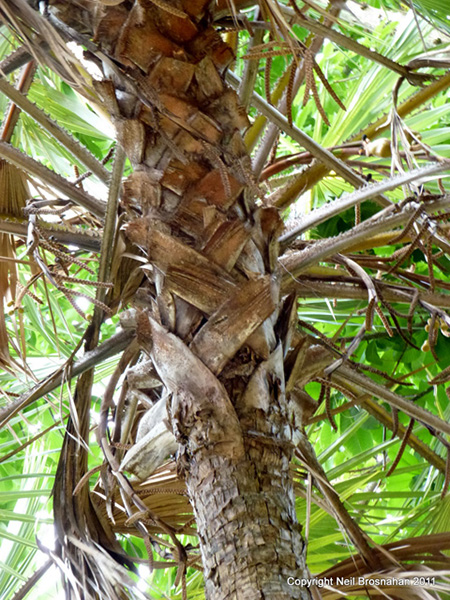 Hyphaene thebaica is a dioecious palm 10-17 m high. Trunk is Y-shaped, with a girth of 90 cm., and the tree is easily recognizable by the dichotomy of its stem forming up to 16 crowns.
Bole fairly smooth but clearly showing the scars of the fallen leaves. Bark dark grey. Leaves 120 x 180 cm, fan shaped, borne in tufts at the ends of branches with the blade divided into segments about 60 cm long, margins entire; leaf stalk (petiole) about 60-100 cm long, sheathing at the base with numerous upwardly curving hooks. Male and female flowers on separate trees. The inflorescence is similar in both sexes, up to 1.2 m long, with short branches at irregular intervals and 2-3 spikes arising from each branch. Male flowers shortly stalked, solitary in pits of the spadix, spathe-bracts encircling the spadix, pointed. Branches of female spadices stouter, in the fruiting stage marked by densely tomentose cushions after the fall of the fruit. The female palm produces woody fruits that persist on the tree for a long time. They are 6-10 x 6-8 cm, smooth, rectangular to cubical, with rounded edges, shiny brown when ripe, about 120 g each when fresh, 60 g when dry, each containing a single seed. Seeds 2-3.5 x 3 cm, ivory in colour, trunkate at base, apex obtuse.

Hyphaene is derived from the Greek word 'hyphaino' (web), referring to the fibres from the leaves, which are used for weaving.


Seeds are sown directly, and after 5-6 months they send out very long roots. It is best if the outer seed covering is removed and then the seed planted about 20 cm deep. Soil needs to be kept moist for 2-3 months to ensure germination; after that, the palm can be considered established and can tolerate up to 10 months of drought. It is also possible to establish trees from suckers growing on the mother tree, but these usually require a longer period of watering. Rhizomes can also be used to regenerate plants. Growth is known to be relatively slow, and after germination a single strip-shaped leaf is produced, with fan-shaped leaves being produced at ground level 2-3 years after germination. At this stage, a new leaf is produced every 7 days and the stem is produced after 18-20 years. This fire-resistant species is managed by coppicing and lopping. Mature trees of 6-8 years produce 50 kg of fruit/year. Palm trees that are tapped for production of wine need to be protected from browsing camels.
Source: http://www.worldagroforestry.org/sea/Products/AFDbases/af/asp/SpeciesInfo.asp?SpID=983 [accessed 9/12/12/]

Hyphane thebaica is one of the 11 species of the genus found in Africa. Widespread in the Sahel, it grows from Mauritania to Egypt, from Senegal to Central Africa and east to Tanzania. The tree tends to grow close to groundwater but can also grow farther away. It is also found in parts of the Sahara where water occurs, in oases and wadis, and is widely distributed near rivers and streams, sometimes on rocky slopes. It does not do well in waterlogged areas; it is very resistant to bush fires. Trees occur on silty soils on river and stream banks and on rocky hilly slopes throughout the Sudan.
Source: http://www.worldagroforestry.org/sea/Products/AFDbases/af/asp/SpeciesInfo.asp?SpID=983 [accessed 9/12/12/]

Food: The covering of the fruit is edible and can either be pounded to form a powder or cut off in slices; the powder is often dried then added to food as a flavouring agent. Young shoots produce tasty palm cabbage; the hypocotyl is edible, and so are the immature seeds if well prepared. Fodder: Trees are browsed to a limited extent by livestock, especially in dry periods.
Source: http://www.worldagroforestry.org/sea/Products/AFDbases/af/asp/SpeciesInfo.asp?SpID=983 [accessed 9/12/12/]

Fuel: Palms are occasionally used for firewood and charcoal; leaves may also be used as fuel. Fibre: Leaves are probably the most important part of the palm, providing the raw material used in basketry, making mats, brooms, coarse textiles, ropes, thatching and string. Root fibres obtained after 2-3 days of soaking and beating of the roots are used for making fishing nets. Timber: Wood can be cut using an axe, but is difficult to saw due to the many fibres that constitute the wood. Timber from the male palm is said to be better than that from the female, as it is borer and termite proof, decorative and durable. It is often used for construction, providing supports and rafters for houses, water ducts and wheels, railway sleepers, planks, fence posts and raft construction. Tannin or dyestuff: Dried bark is used to produce a black dye for leatherwear. Alcohol: In Turkana, Kenya, the powder made from the outer covering of the fruit is added to water and milk and left to stand to make a mild alcoholic drink; in other countries, the terminal meristem is tapped for making palm wine. Medicine: Roots are used in the treatment of bilharzia, while fruit pulp is chewed to control hypertension. Sore eyes in livestock are treated using charcoal from the seed kernel. Other products: The hard seed inside the fruit, known as 'vegetable ivory', is used to make buttons and small carvings, and as artificial pearls. Ashes from the stipes of trees can be used as a substitute for salt.
Source: http://www.worldagroforestry.org/sea/Products/AFDbases/af/asp/SpeciesInfo.asp?SpID=983 [accessed 9/12/12/]