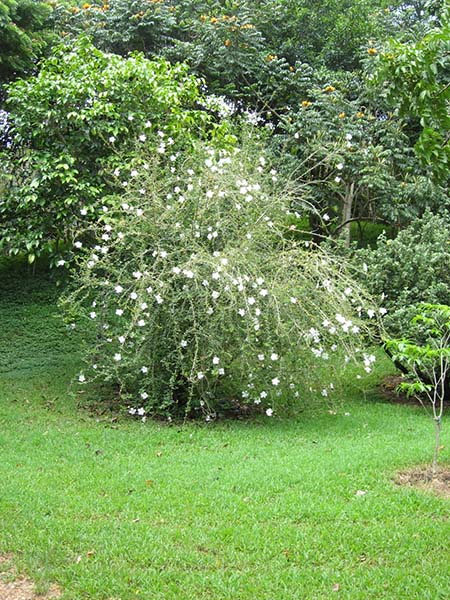 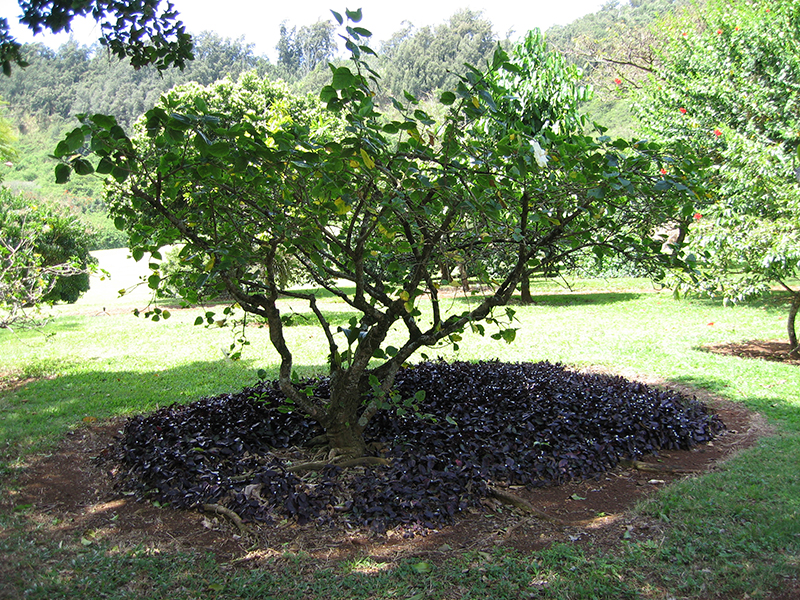 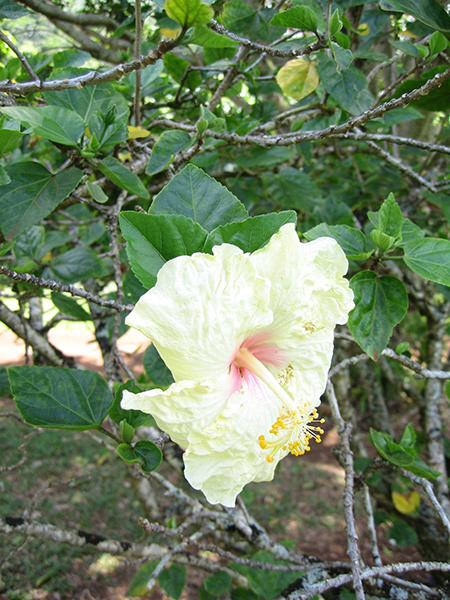 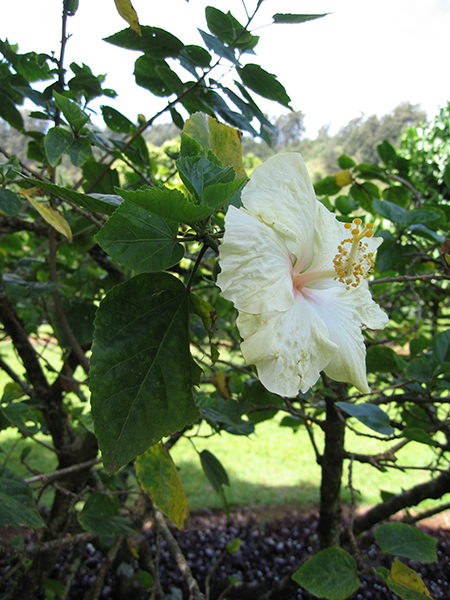 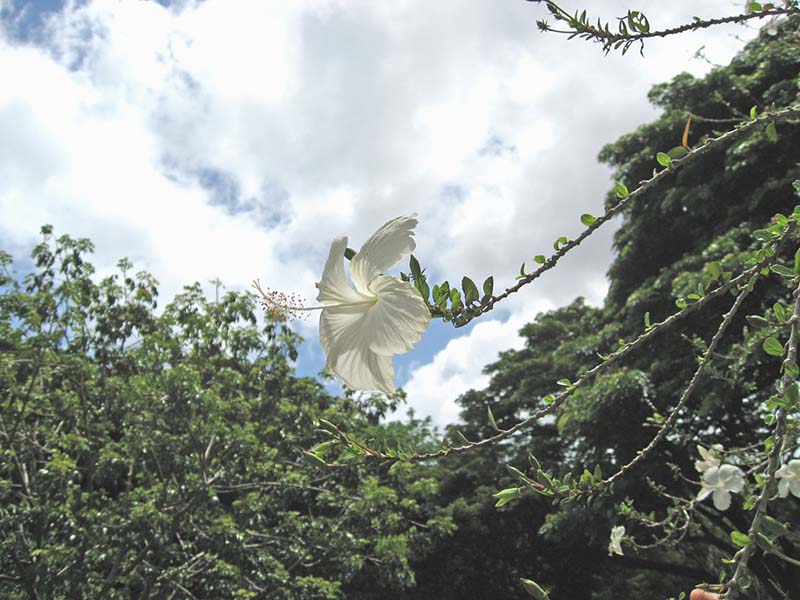 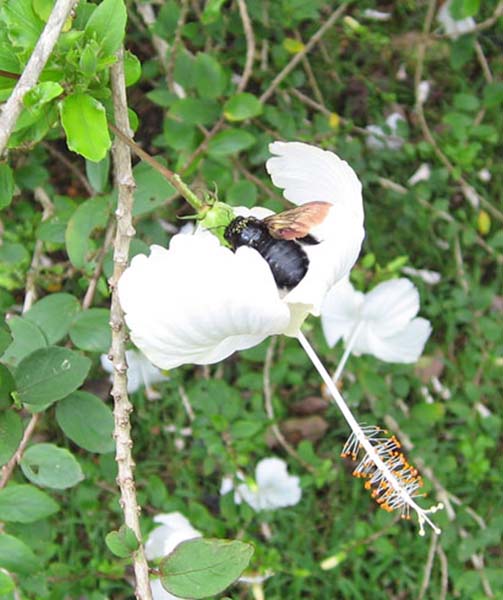 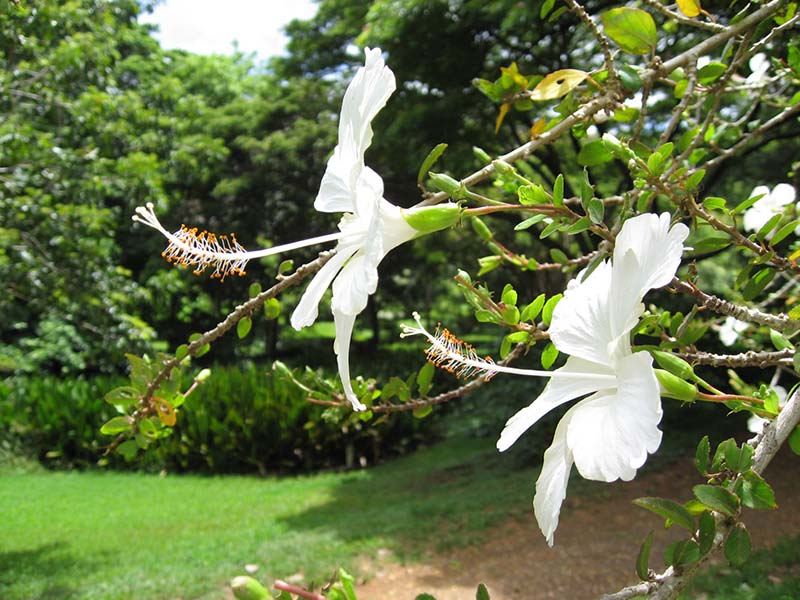 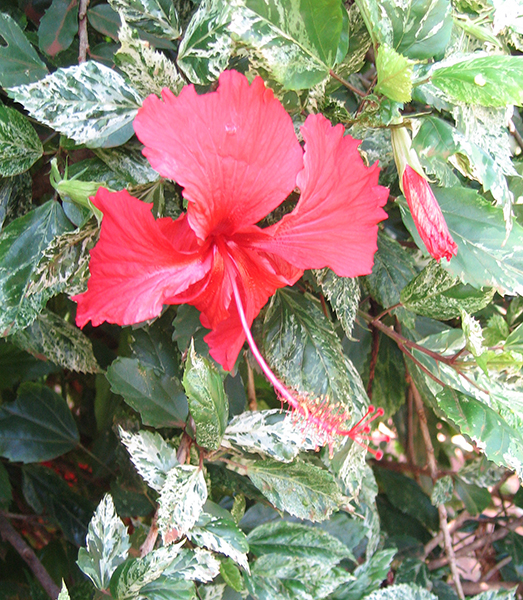 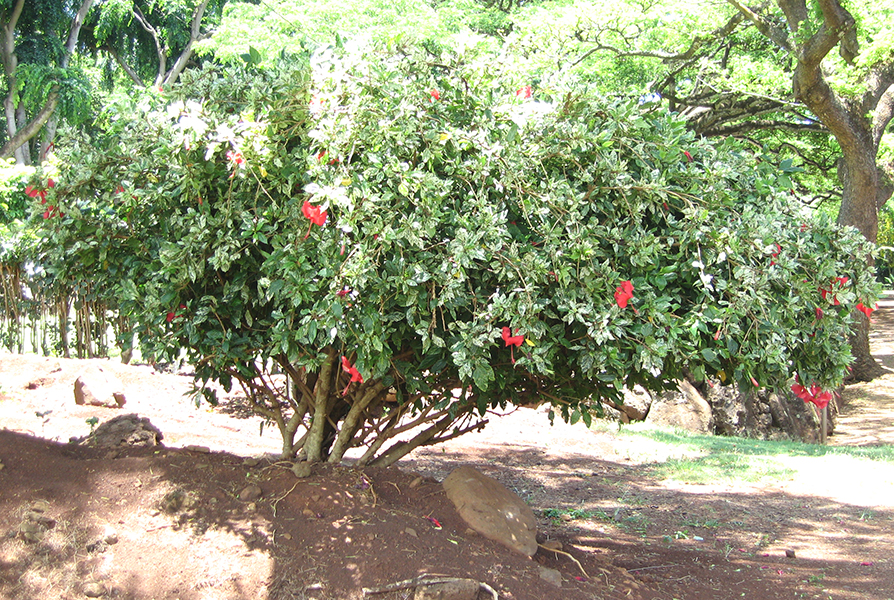 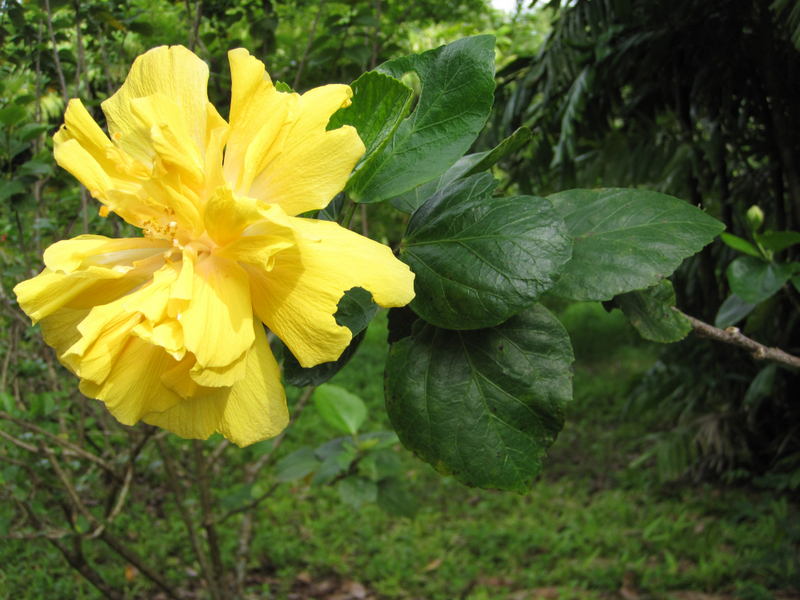 Hibiscus rosa-sinensis, also known by the common name, Red hibiscus, is a large shrub or small tree that grows up to 4.7 m tall. This plant has a variable stature and may be upright or broad and spreading.The leaves are arranged alternately on the branches and are ovate in shape (wider at the base than at the tip) and grow from 5 to 15 cm long. The leaves may be dark green or variagated with lighter patches and the margins of the leaves are toothed. The red flowers are very large and can be up to 15 cm long. Like all Hibiscus flowers, the stalks of the stamens (the pollen producing structures) and the style are fused into a long column that is exerted from the center of the widely spreding petals. In cultivated varieties the petals may be single or double, smooth or scalloped. Many anthers (in which the pollen is produced) can be seen part-way up the column and five round stigma lobes (onto which the pollen lands in order for fertilization to occur) are visible at the tip of the column. The fruit of Red hibiscus is a dry, five parted capsule that contains up to three seeds, each of which is kidney-shaped and 2.5 cm long.

(Staples, G. W. and D. R. Herbst. 2005. A Tropical Garden Flora: Plants cultivated in the Hawaiian Islands and other tropical places. Bishop Museum Press, Honolulu, Hawai’i.)
The bark of Hibiscus rosa-sinensis contains strong bast fibers. These can be harvested by removing the outer bark from pruned branches and scraping out the inner fiber layers. The fibers present provide structural strength to the phloem, which carries the sugar produced during photosynthesis around the plant, and are present immediately beneath the bark. Other Hibiscus species, including the species, Hibiscus tiliaceus that is commonly known as Hau, also provide strong fibers that was traditionally used to produce cordage. The fibers of Hau were twisted or braided, with or without the outer bark present, however, unlike 'Aha fibers obtained from Coconut (Cocos nucifera) husks, the Hau fibers were not water resistant.

(Abbott, I A. 1992. L?`au Hawai‘i: Traditional Hawaiian Uses of Plants. Bishop Museum Press, Honolulu, Hawai’i.)
(Neal, M.C. 1965. In Gardens of Hawai‘i. Bishop Museum Press, Honolulu, HI.)
Red Hibiscus is a cultivated Hibiscus for which the origin and historical distribution is unknown. This species is no longer known in the wild. The genus Hibiscus contains approximately 200 species distributed throughout tropical and subtropical regions. Numerous crosses of Hibiscus rosa-sinensis and the native Hawaiian Hibiscus species have contributed to producing a wide range of floral forms of this species.

(Staples, G. W. and D. R. Herbst. 2005. A Tropical Garden Flora: Plants cultivated in the Hawaiian Islands and other tropical places. Bishop Museum Press, Honolulu, Hawai’i.)
Just as the origin of Hibiscus rosa-sinensis is unknown, so too is the identification of the native pollinators of this species. The morphology of the flowers suggests pollination by hummingbirds and Sunbirds that are attracted to nectar producing, red flowers. In Hawaii cultivated Red hibiscus plants show variable levels of seed production. It has been suggested that this species requires a dry climate and plants growing in humid climates will not set seed.

(Prendergaast, H.D.B. 1982. Pollination of Hibiscus rosa-sinensis. Biotropica 14(4): 287.)
(Staples, G. W. and D. R. Herbst. 2005. A Tropical Garden Flora: Plants cultivated in the Hawaiian Islands and other tropical places. Bishop Museum Press, Honolulu, Hawai’i.)
The specific epithet, rosa-sinensis, translates from Latin meaning "rose of China" describing the topical Asian origin of this species. The common name Shoeblackplant is derived from the blue-black juice that is obtained by crushing the wilted flowers that was used as shoe-blacking and hair coloring.

Hibiscus rosa-sinensis was historically widespread in cultivation throughout tropical Asia. This is one of the most variable of all cultivated Hibiscus species. Erect plants are available that grow tall enough to serve as windbreaks. More compact plants are maintained as hedges and require frequent pruning. Hibiscus rosa-sinensis is recommended as a xeriscape plant due to its moderate drought tolerance once it is established. Selective breeding of this species has resulted in many floral forms including red, white, yellow, or orange flowrers, single or double petals,
flower colors available in both single and double forms. Double-flowered forms are produced by converting the pollen producing structures called stamens to petals, which is achieved by alteration of the organ-identity genes that control floral development.

We currently have 14 herbarium specimens for Hibiscus rosa-sinensis in our collection. Click on any specimen below to view the herbarium sheet data.