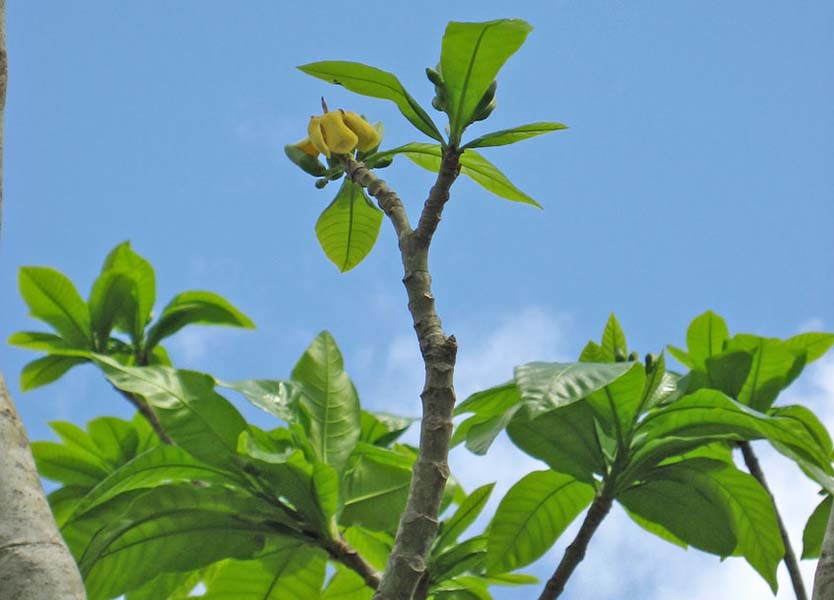 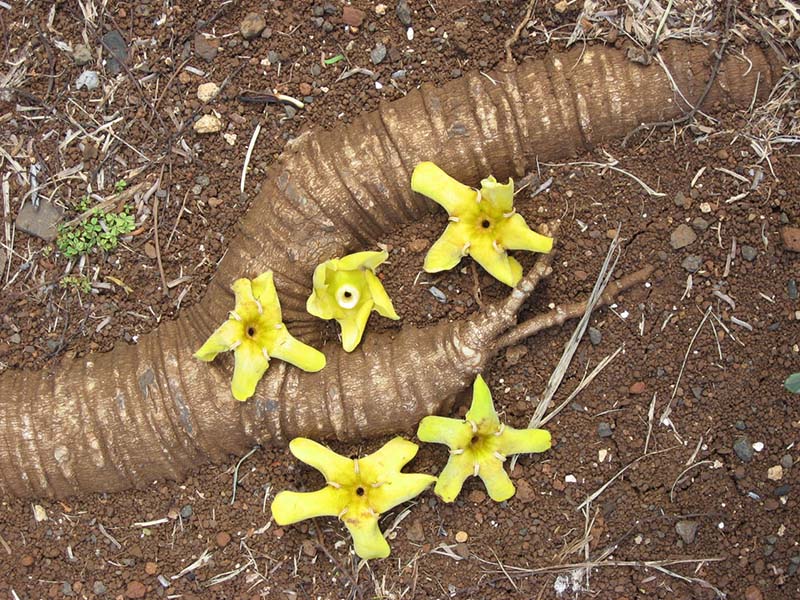 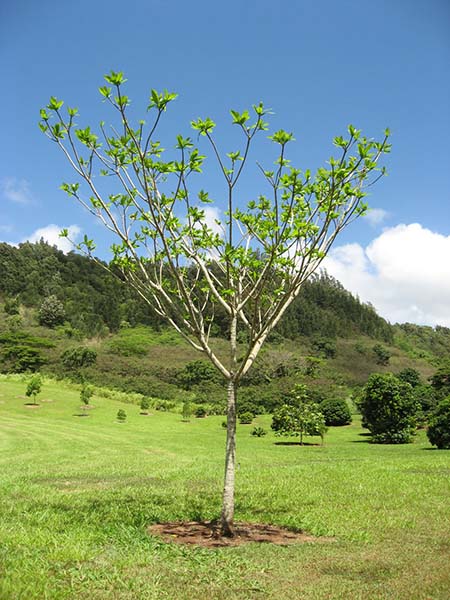 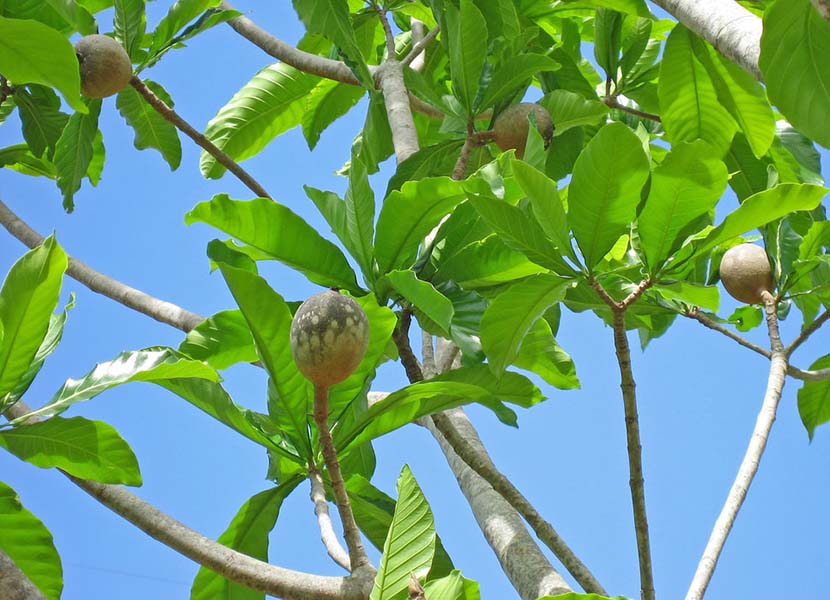 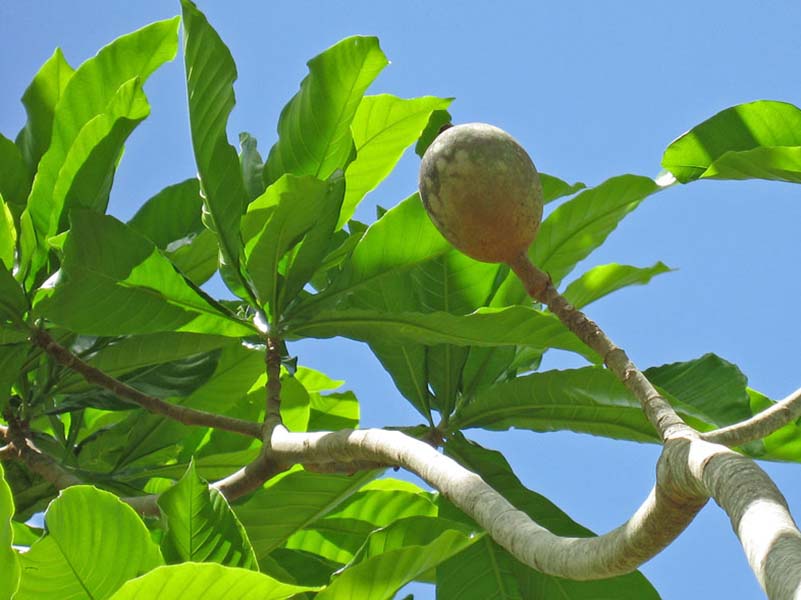 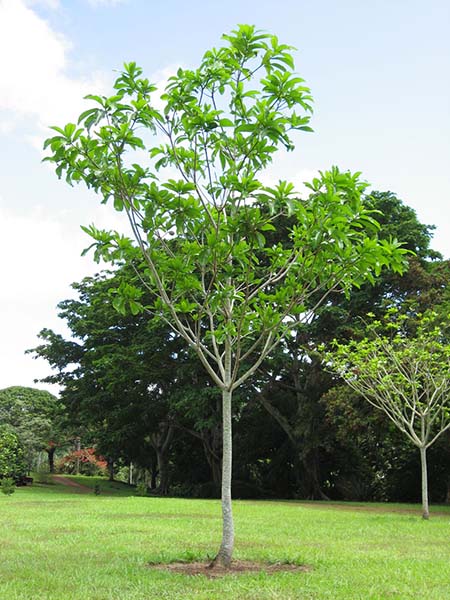 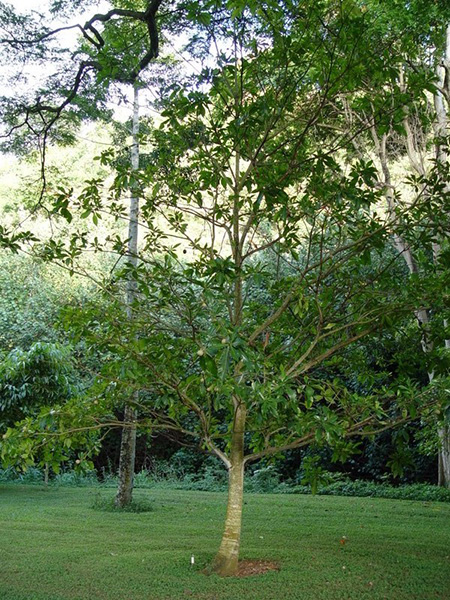 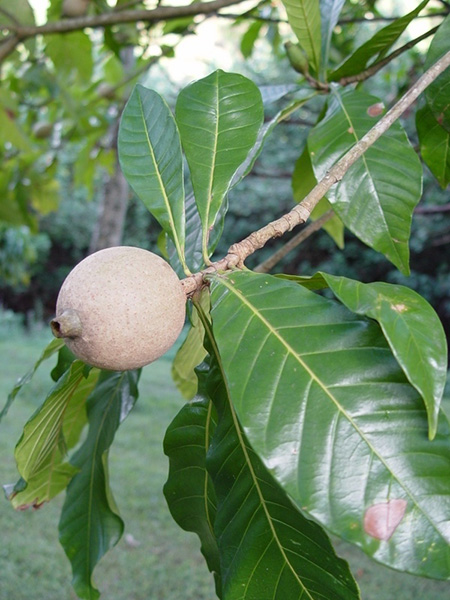 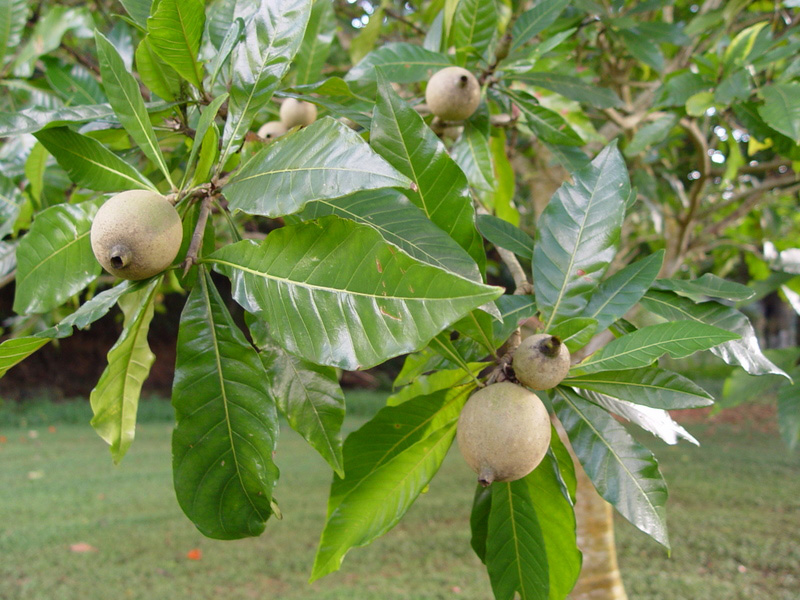 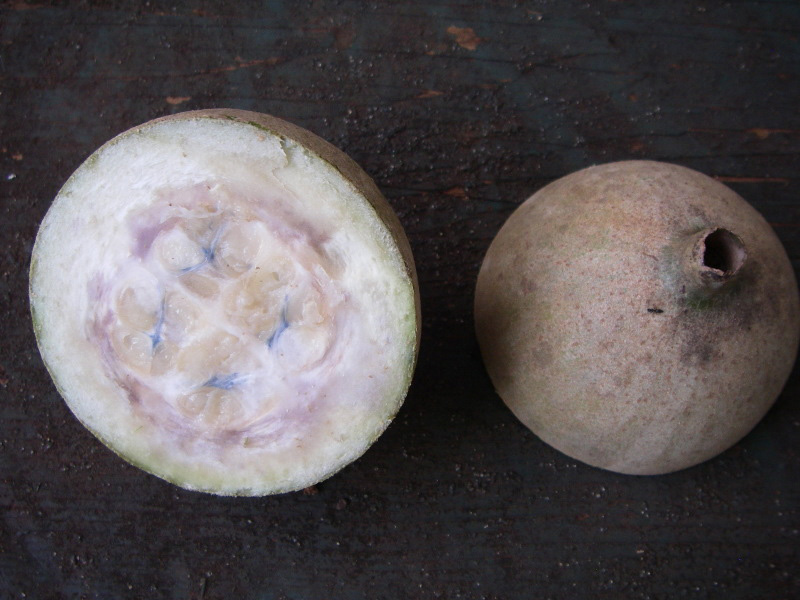 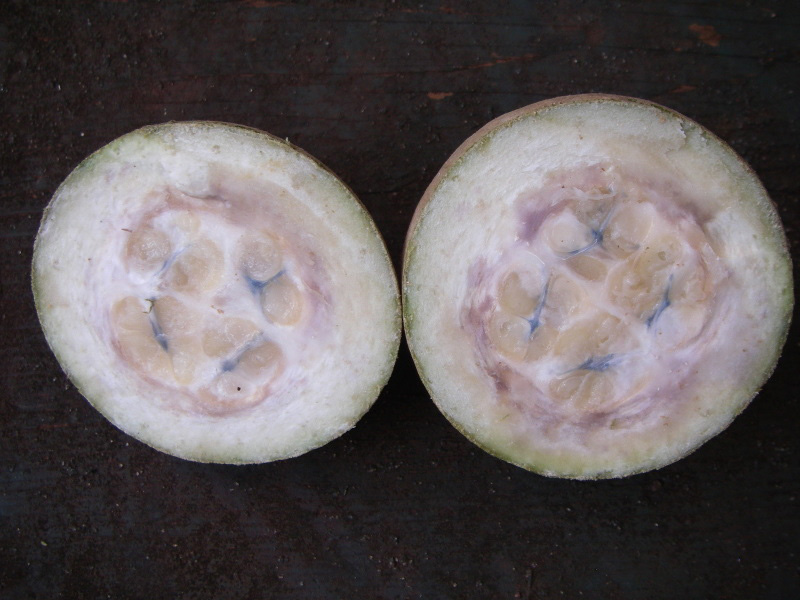 Description:
Genipa americana, also known as Jagua, is a semi-deciduous species that grows up to 25 m in height. The leaves are large and leathery and are oblong in shape growing up to 30.5 cm long and 16 cm wide. As with all members of the Madder family, small stipules or bracts are present between the leaf stalks but they are deciduous so are not always visible on older branches. The flowers are borne in clusters of a few white to yellow flowers that are 2.5 cm in diameter and 2.5 cm long. The petals form a tube at the base and have 5 or 6 lobes that spread widely. The pollen producing structures are inserted onto the floral tube. The fleshy fruit grows to 6.4 cm in diameter and is divided into two sections each of which contains many (up to 300) dark brown seeds that are 1.3 mm long.

(Bailey, L.H. 1949. Manual of Cultivated Plants. The MacMillan Company, New York, NY.)
The fruit is considered astringent and is brewed to produce a tea that is taken for the treatment of bronchitis. The fruit is also applied to the skin as an insect repellent.
The tropical regions in which this species is found undergo periodic to continuous flooding for up to 6 months and many of the tree species found in these rainforests synchronize fruiting and seed dispersal during periods of intense flooding. Jagua fruit are thought to be dispersed by water, as they remain viable following submersion in water for up to 4 months. The fruit take up to 12 months to mature and during this period will float if removed from the tree. Following maturation a change in the density of the fruit causes it to sink to the bottom where it remains submerged until the floodwaters recede. The seeds are sensitive to temperature and reduced germination is observed at constant temperatures below 15oC and above 40oC. Jagua fruit are fleshy and are consumed by fish, mammals, and large birds that may contribute to the dispersal of these seeds when seasonal flooding is limited.

(de Souza, A.F., A.C.S. de Andrade, F.N. Ramos, M.B. Loureiro. 1999. Ecophysiology and morphology of seed germination of the neotropical lowland tree Genipa americana (Rubiaceae). Journal of Tropical Ecology 15(5): 776-680.)
Jagua provides many resources that are utilized widely throughout central and south America. The wood from the tree is used for firewood and for construction of cabinets and carvings, however, the wood is not exceedingly durable or termite resistant. The bark is contain high levels of tannin and is used to tan leather. The flowers are utilized in the production of aromatic oils. The pulp produces a blue-black dye that is used as a body paint to decorate skin that would last two weeks before fading. The dye can be used to dye clothes and pottery. The pulp of the fruit is obtained by soaking the fruit, which separates the seeds from the pulp itself.
Genipa americana is native to southern Mexico, the Caribbean, and northern South America where it is found in lowland rainforests and flood-prone forests, including seasonal swamp forests that are inundated as a result of the flooding of small streams during the rainy season. Jagua, is a semi-deciduous tree, meaning that it may lose its leaves to reduce water loss, during the dry season.

(de Souza, A.F., A.C.S. de Andrade, F.N. Ramos, M.B. Loureiro. 1999. Ecophysiology and morphology of seed germination of the neotropical lowland tree Genipa americana (Rubiaceae). Journal of Tropical Ecology 15(5): 776-680.)
Jagua is cultivated for fruit production as the fruit contain iron, riboflavin, and anti-bacterial substances. The fruit is consumed either raw or processed into jelly, juice, or syrup that is incorporated into sherbet or ice-cream.

We currently have 17 herbarium specimens for Genipa americana in our collection. Click on any specimen below to view the herbarium sheet data.